A new weekly Household Pulse Survey from the US Census Bureau provides information on household employment that is more up-to-date than the official jobs report from the US Bureau of Labor Statistics (BLS), which lags by a month or more. While the Pulse survey’s estimates should be interpreted with caution (as we discuss here), they nonetheless provide a helpful “real-time” gauge of changes in employment.

The Pulse survey initially ran for three months, from late April to late July. While the program’s funding has been renewed, there was a period of four weeks in which no surveys were taken. The most recent Pulse survey covers the period from November 25 to December 7, and shows employment declines of 1.55 million in the state and 4.65 million nationally from the previous survey which ran from November 11 to November 23. These estimates are subject to significant sampling error, and the most recent survey likely underestimated employment while the previous survey likely overestimated it. As such, the actual employment declines over this period were probably not nearly as large as these data show. Nonetheless, they suggest that the employment picture has not improved much since late summer in either the state or the nation. The figure below shows the total estimated percent change in employment since the week of April 23, which is 0.4 percent growth in California and 6.8 percent growth nationwide. 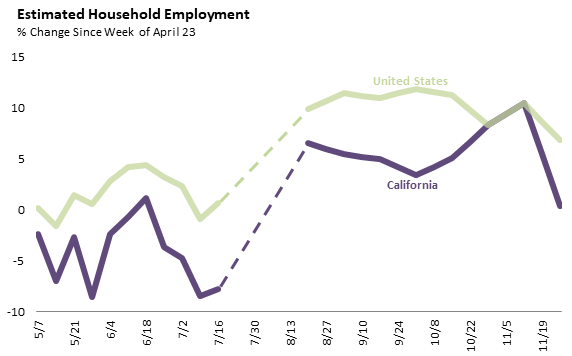