Pursuant to Elections Code Section 9005, we have reviewed the proposed statutory initiative related to transportation funding (A.G. File No. 17-0004, Amdt. #1).

Tax and Fee Increases. Senate Bill 1 increases two existing excise taxes on gasoline. (The two taxes differ in that one has a fixed rate and the other has a variable rate set annually by the State Board of Equalization to mimic a sales tax on gasoline.) It also increases existing excise and sales taxes on diesel. Additionally, the legislation creates two new vehicle charges: (1) a Transportation Improvement Fee that varies depending on the value of the vehicle, and (2) a supplemental registration fee for zero-emission vehicles. Figure 1 summarizes these taxes and fees. As shown in the figure, SB 1 phases in the taxes and fees over time. It also adjusts most of them for inflation moving forward. Altogether, SB 1 is expected to increase annual transportation revenues by $2.6 million in 2017-18, increasing to $4.9 billion in 2020-21 once all the taxes and fees are fully implemented. (These estimates are subject to some uncertainty as the actual level of revenues could vary depending on various factors, such as actual fuel prices in the coming years.) 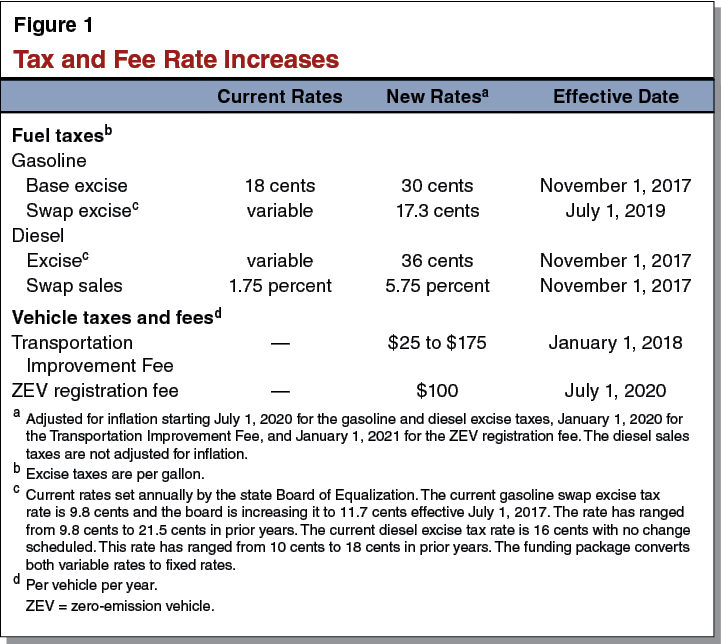 After 2017-18, the share of revenues going to state highways and local streets and roads increases somewhat compared to other programs.

Accountability and Other Provisions. Senate Bill 1 includes various provisions to increase accountability over state transportation spending. For example, the legislation (1) creates a new Inspector General within the California Department of Transportation (Caltrans) to ensure the department spends its funding efficiently, economically, and in compliance with state and federal requirements; and (2) enhances the California Transportation Commission’s oversight of Caltrans’ highway rehabilitation project proposals. In addition, the legislation contains certain other transportation-related provisions, including (1) a requirement for the Department of Motor Vehicles to confirm certain trucks are in compliance with state air pollution standards as a condition of registration starting in 2020, and (2) a prohibition on state and local regulations requiring a truck to meet stricter air pollution standards for up to 18 years after it is first certified for use. The legislation also schedules $706 million to repay over a three-year period—starting in 2017-18—certain loans that were made in prior years from various special transportation funds to the state General Fund.

This measure would repeal most provisions of SB 1, including all tax and fee increases and all accountability measures contained in the legislation. The measure would not repeal the two different provisions related to trucks and air pollution nor the provision related to loan repayments from the General Fund. Because the measure would appear on the November 2018 ballot and take effect immediately after its passage, most tax and fee increases authorized under SB 1 would already have taken effect, as would the legislation’s various accountability and other provisions.

Reduction in State Transportation Funding. In 2018-19, this measure would reduce SB 1 transportation revenues from $4.3 billion to $1.4 billion—a $2.9 billion decrease. (The $1.4 billion in remaining revenues is attributable to the increased taxes and fees collected from July 1, 2018 until this measure would take effect in early November 2018.) Starting in 2019-20, the measure would eliminate all SB 1 transportation revenues. Absent the measure, these revenues are estimated to total $4.9 billion annually by 2020-21, the first year all the tax and fee increases are implemented. The funding reductions would primarily affect state highway maintenance and rehabilitation, local streets and roads, and mass transit.

Summary of Fiscal Effects. This measure would have the following major fiscal effect: