Pursuant to Elections Code Section 9005, we have reviewed the proposed constitutional initiative regarding voter approval for transportation-related taxes (A.G. File No. 17-0033, Amendment No. 1).

Taxes Require Two-Thirds Vote of Legislature. The State Constitution authorizes the Legislature to pass a tax with a two-thirds vote of each house. The Constitution defines what types of charges are considered taxes for this two-thirds vote requirement. Under this definition, some charges referred to by other names can be considered taxes. For example, fees that pay for services beyond those provided directly to the fee payer can be considered taxes. Court rulings over the years have helped clarify what charges qualify as taxes for the purposes of the two-thirds legislative vote requirement, though uncertainty still exists in some cases.

State Imposes Several Transportation Taxes. The state currently imposes several charges related to transportation that are widely regarded as taxes for purposes of the two-thirds vote requirement. These include: (1) per-gallon (or “excise”) taxes on gasoline and diesel, (2) sales taxes on diesel, (3) truck weight fees, and (4) vehicle license fees (based on the value of a vehicle). The State Constitution requires the Legislature to spend revenues from the excise taxes, some diesel sales taxes, and truck weight fees on transportation purposes, including state highways, local streets and roads, and mass transit. Tax revenues from off-highway vehicles and fuel usage, however, are not subject to these restrictions. The Legislature has discretion over vehicle license fee revenues, which it currently provides to local governments to spend on certain public safety and health and human services programs.

In April 2017, the Legislature enacted Chapter 5 (SB 1, Beall) to increase state funding for California’s transportation system. The funding-related provisions of the legislation (1) raise new revenue through various taxes and (2) dedicate the new revenues to transportation programs.

Tax Increases. Senate Bill 1 increases two existing excise taxes on gasoline as well as existing excise and sales taxes on diesel. Additionally, the legislation creates two new vehicle taxes: (1) a transportation improvement fee that varies depending on the value of the vehicle (similar to the existing vehicle license fee), and (2) a supplemental registration charge for “zero-emission” vehicles (such as electric cars). Figure 1 summarizes these taxes. The legislation phases in the taxes over time, with some already having taken effect. Altogether, the tax increases are expected to increase annual transportation revenues by $2.6 billion in 2017-18, increasing to $4.9 billion in 2020-21 once all the taxes are fully implemented. (These estimates are subject to some uncertainty as the actual level of revenues could vary depending on various factors, such as actual fuel prices in the coming years.) 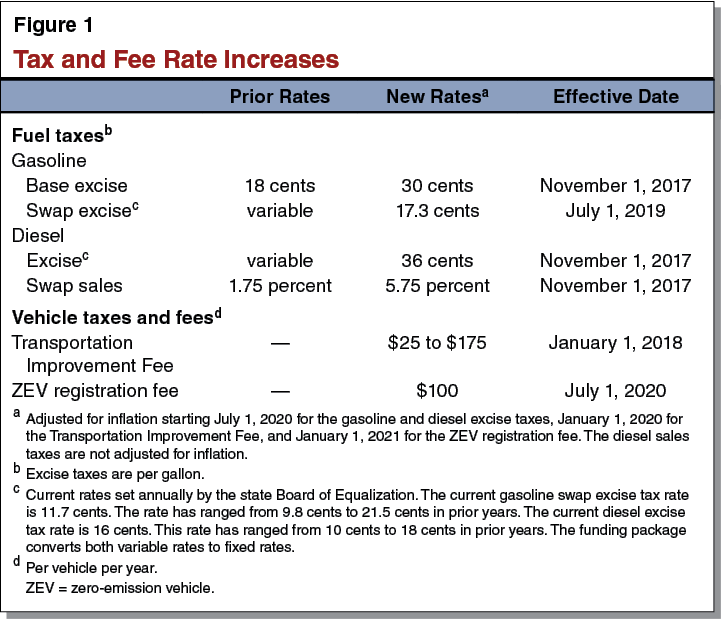 After 2017-18, the share of revenues going to state highways and local streets and roads increases somewhat compared to other programs.

Requires Voter Approval to Raise Specified Transportation Taxes. The measure requires the Legislature to obtain voter approval to impose, increase, or extend excise and sales taxes on gasoline and diesel, as well as taxes on vehicles (such as weight fees and the vehicle license fee). The Legislature would still have to pass any such tax measures with a two-thirds vote of each house. In order for them to become law, they would also have to be approved by a majority of voters.

Eliminates Recent Transportation Taxes. The new voter approval requirements would also apply to transportation-related taxes imposed after January 1, 2017 and up to the effective date of the measure. This would have the effect of eliminating the taxes recently imposed by SB 1 (and any other taxes imposed during this interim period). Because the measure would appear on the November 2018 ballot and take effect immediately after its passage, most of the SB 1 tax increases will have already taken effect.

Reduction in Transportation Tax Revenues Authorized Under SB 1. In 2018-19, this measure would reduce SB 1 transportation tax revenues from $4.3 billion to $1.4 billion—a $2.9 billion decrease. (The $1.4 billion in remaining revenues is attributable to the increased taxes collected from July 1, 2018 until this measure would take effect in early November 2018.) Starting in 2019-20, the measure would eliminate all SB 1 transportation tax revenues. Absent the measure, these revenues are estimated to total $4.9 billion annually by 2020-21, the first year all the tax increases are implemented. The funding reductions would primarily affect state highway maintenance and rehabilitation, local streets and roads, and mass transit.

Makes Passage of Future Transportation Taxes More Difficult. By adding the requirement that most transportation-related taxes must be approved by the voters, the measure would make it more difficult to impose such charges in the future. As a result, there could be some transportation-related taxes approved by the Legislature but not by the voters, resulting in less revenue than would otherwise be the case. This impact is unknown, as it would depend on future actions by the Legislature and voters.

Summary of Fiscal Effects. This measure would have the following fiscal effects: