Pursuant to Elections Code Section 9005, we have reviewed the proposed constitutional initiative (A.G. File No. 19-0003) related to property tax assessment.

Ownership Changes Increase Property Taxes. The market value of most homes (what they could be sold for) grows faster than 2 percent annually. This means the taxable values of most properties are less than their market values. Property transfers, therefore, typically trigger an increase in a property’s taxable value. This, in turn, leads to higher property tax collections. Because of this, movers often face increased property tax bills because the purchase price of the newly purchased home often exceeds the taxable value of the buyer’s prior home (even when the homes have similar market values).

Special Rules for Some Homeowners. In some cases, special rules allow existing homeowners to move to a different home without paying higher property taxes. These special rules apply to homeowners who are over 55 or severely disabled or whose property has been impacted by a natural disaster or contamination. (We refer to these homeowners as “eligible homeowners.”) When moving within the same county, an eligible homeowner can transfer the taxable value of his or her existing home to a different home if the market value of the new home is the same or less than the existing home. Also, a county government may allow eligible homeowners to transfer their taxable values to homes in the county from homes in different counties. Ten counties allow these transfers. Except in limited cases, homeowners who are over 55 or severely disabled can only transfer their taxable value once in their lifetime. The nearby box (“What Happens Under Current Law?”) has an example of how these rules work.

Special Rules for Inherited Properties. Special rules also exclude from reassessment certain property transfers between parents and children. These rules also apply to grandparents and grandchildren if the grandchildren’s parents are deceased. (We refer to properties transferred between parents and children or grandparents and grandchildren as “inherited property.” This includes properties transferred before and after the death of the parent or grandparent.) The rules apply to all types of property including primary residences, vacation homes, and business properties. There is, however, a cap of $1 million in aggregate taxable value of all inherited properties that were not used as the parent’s primary residence.

The measure amends the State Constitution to make various changes to the special rules for eligible homeowners and inherited properties, as well as the rules for taxation of properties held by legal entities.

Expands Special Rules for Eligible Homeowners. The measure expands the special rules that give property tax savings to eligible homeowners when they buy a different home. Specifically, effective July 1, 2021, the measure:

To use the special rules, homeowners would need to file an application with their county assessor. 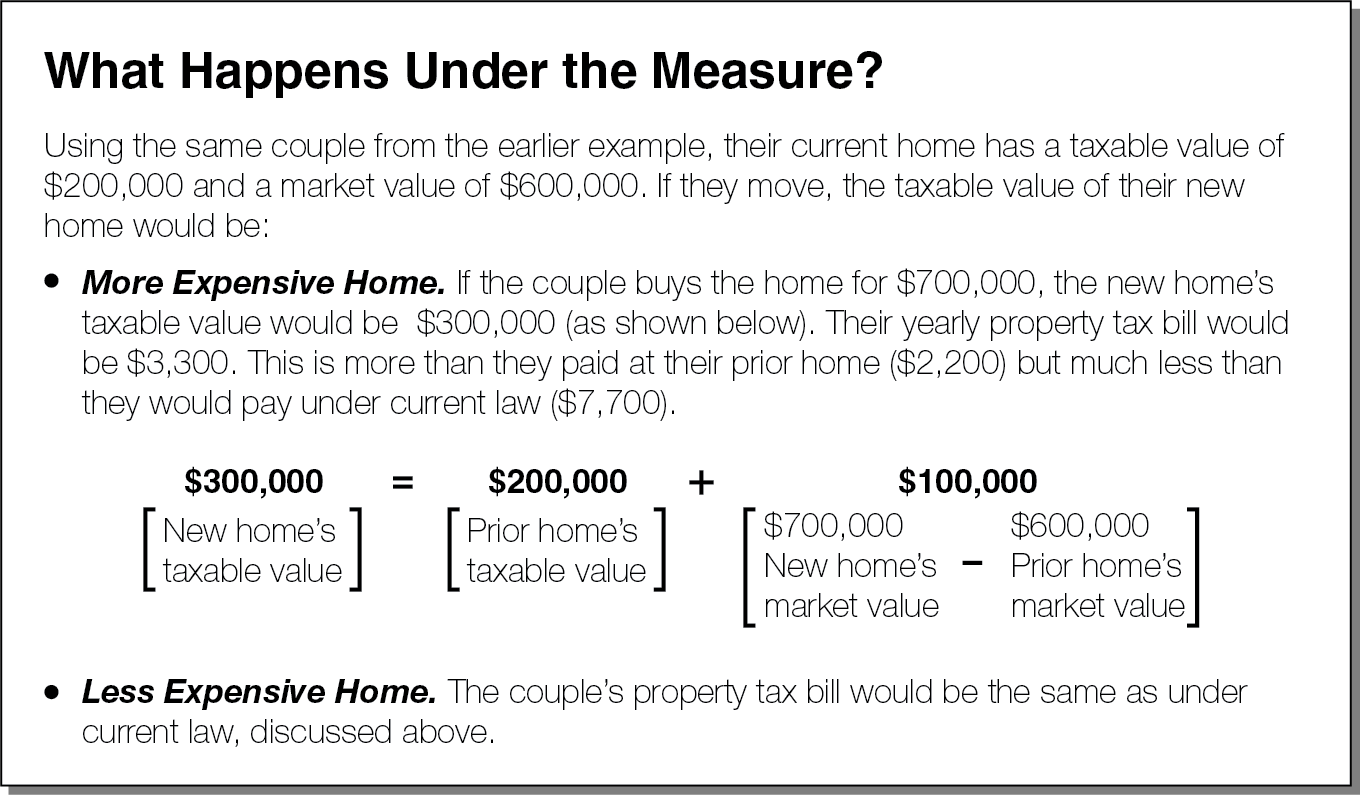 Broadens Scope of Legal Entity Ownership Changes. In addition to the existing circumstances defined in current law, the measure broadens the types of legal entity ownership changes that trigger reassessment. Specifically, effective January 1, 2021, the measure requires properties owned by a legal entity to be reassessed if 90 percent or more of the ownership of the legal entity is transferred, even if no single person or entity gains more than 50 percent ownership. The transfer of 90 percent of the ownership could occur in a single transaction or over time as part of multiple transactions. The sale of stock in a publicly traded company through an established stock market would not count as a change of ownership.

Increased Property Tax Revenue From Inherited Property Rules. As the measure would narrow the inheritance reassessment exclusion, it would result in more properties being reassessed at the time of inheritance. Under current law, between 60,000 and 80,000 inherited properties statewide are excluded from reassessment each year. Somewhere around two-thirds of these properties are not used as primary residences. Further, it appears that roughly one-fifth of the tax benefit on inherited primary residences went to those who received a benefit greater than $1 million. Both of these types of inherited properties would see an increase in their taxable value under the measure. This suggests the measure could lead to increases in property tax payments for 40,000 to 60,000 properties each year. This, in turn, would increase property tax revenues for local governments. In the first few years, schools and other local governments each probably would gain over $100 million per year. Over time, these gains would grow resulting in schools and other local governments each gaining about $1 billion per year (in today’s dollars).

Reduced Property Tax Revenues From Expanded Rules for Eligible Homeowners. The changes to the special rules for eligible homeowners could have multiple effects on property tax revenue:

Net Change in Property Taxes for Local Governments. Some parts of the measure would decrease property tax revenues for local governments, while other parts would increase them. Overall, it is likely that revenue gains would exceed revenue losses. In the first few years, local governments collectively could gain tens of millions of dollars per year. These revenue gains would grow over time, eventually reaching a few hundred million dollars per year. Schools could receive similar property tax gains.

Change in State Funding for Schools. Should schools gain property tax revenues under the measure, state funding for schools may decrease by a similar amount in some years. In those years, most schools would receive the same amount of funding they would have received in the absence of the measure.

Increase in Property Transfer Tax Revenues. As the measure would increase home sales, it also would increase property transfer taxes collected by cities and counties. This revenue increase likely would be in the tens of millions of dollars per year.

Higher Administrative Costs for Counties. The measure would require county assessors to create and carry out a variety of new processes, which could necessitate increased staffing and information technology upgrades. This likely would increase annual costs for county assessors by tens of millions of dollars, with potentially higher one-time costs in the first few years.

Summary of Fiscal Effects. The measure would have the following major impacts on state and local governments: