Pursuant to Elections Code Section 9005, we have reviewed the proposed statutory initiative (A.G. File No. 19-0022, Amendment #1) that would authorize $5.5 billion in general obligation bonds for stem cell research and enact various changes to the California Institute for Regenerative Medicine (CIRM).

Researchers Use Stem Cells to Study and Treat Various Diseases. Stem cells are certain types of cells that exist within humans. Researchers are interested in these types of cells for their potential to regenerate lost cells, tissues, and organs. The field of medicine that uses stem cells and other techniques for this purpose is known as “regenerative medicine.” One well-known example of a regenerative medicine procedure is a bone marrow transplant. Under this procedure, the bone marrow of a donor (which contains stem cells) is transferred to another patient to replenish lost blood cells, typically due to certain types of cancer. Scientists are researching the use of stem cells to treat many other diseases and health conditions.

Voters Approved $3 Billion in General Obligation Bonds for Stem Cell Program. To fund stem cell grants and CIRM’s operations, the measure authorized the state to sell general obligation bonds. State general obligation bonds are a form of borrowing. The state sells the bonds to investors, and the proceeds of these sales provide funding to CIRM. The state sells the bonds when CIRM needs the funds (typically once a round of grant awardees has been selected). Once the bonds are sold to investors, the state begins repaying the investors with interest by making annual payments over time. Proposition 71 did not specify the length of the repayment period for each bond issuance, but the state tended to repay the bonds over ten years. Proposition 71 bonds were taxable and a ten-year repayment period is common for these types of bonds. (For taxable bonds, the interest that investors earn is not exempt from federal taxes.)

CIRM Has Spent Nearly All Available Funds. As Figure 1 shows, bonds issued under Proposition 71 have comprised virtually all of CIRM’s funding, with a relatively small amount of funding coming from investment income, private donations, and other sources. CIRM has spent most of the available funding on grants, with smaller amounts spent on CIRM’s operations and bond costs (discussed later in this letter). As of October 2019, all but $132 million of CIRM’s funding has been spent. According to CIRM staff, the remaining funding will be used primarily to oversee active grants. 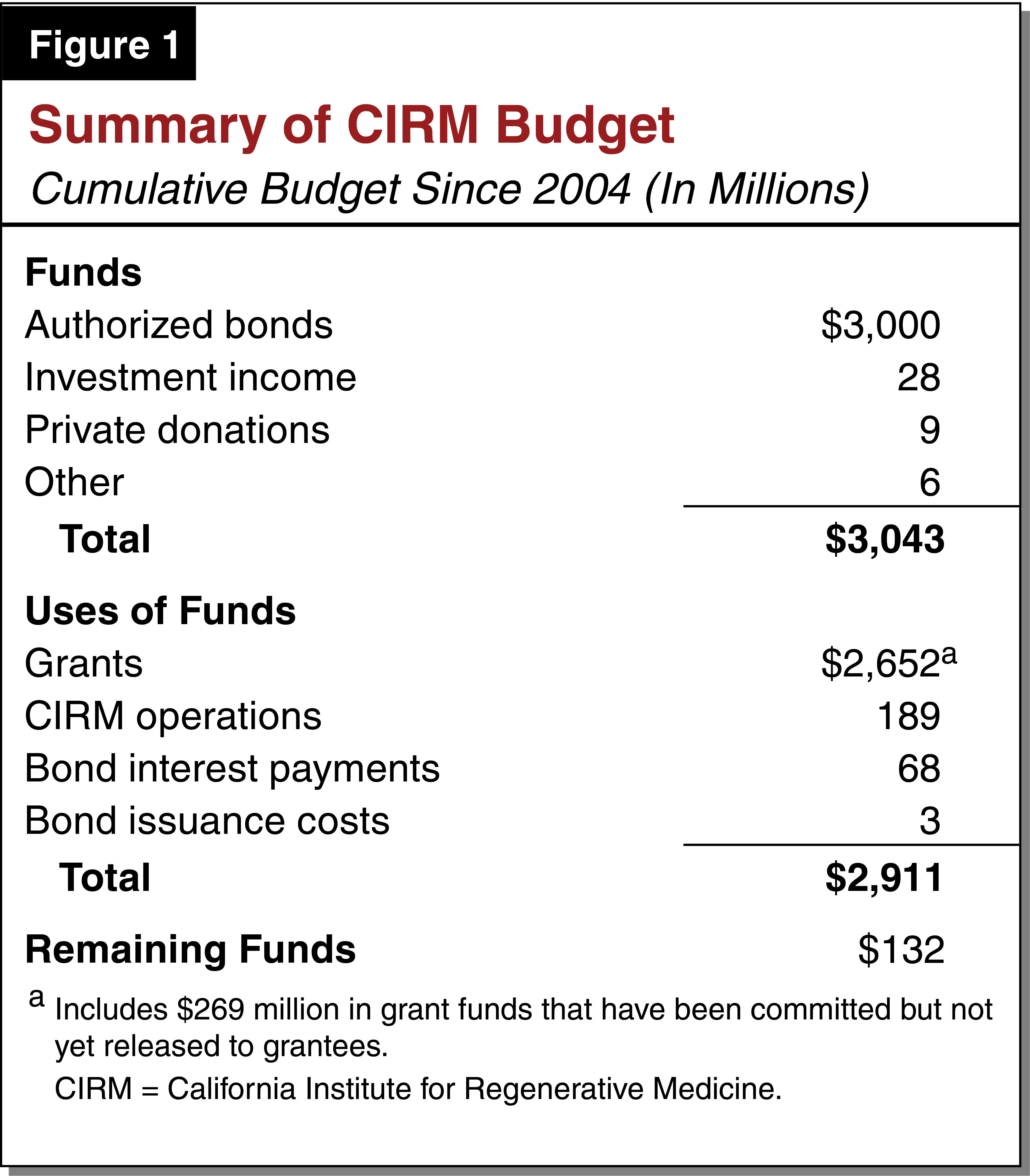 Grants Have Funded Several Different Purposes. As Figure 2 (on the next page) shows, CIRM has awarded about 75 percent of grant funds for specific research projects, including clinical trials. The remaining 25 percent of grant funds have supported research facility construction and equipment, related activities (for example, establishing a network of laboratories dedicated to implementing human clinical trials), and various education initiatives (for example, research internships for undergraduate students). The University of California has received the greatest amount of grant funding, followed by nonprofit universities and institutions (such as Stanford University).

CIRM Is Reducing Staffing Levels. Under Proposition 71, CIRM could spend no more than 3 percent of bond proceeds on its general administrative costs and no more than 3 percent to administer grants. At full implementation, CIRM reports having over 50 full-time equivalent staff. As it nears the end of its programmatic funding, it has reduced operations. Currently, CIRM employs 35 full-time equivalent staff. 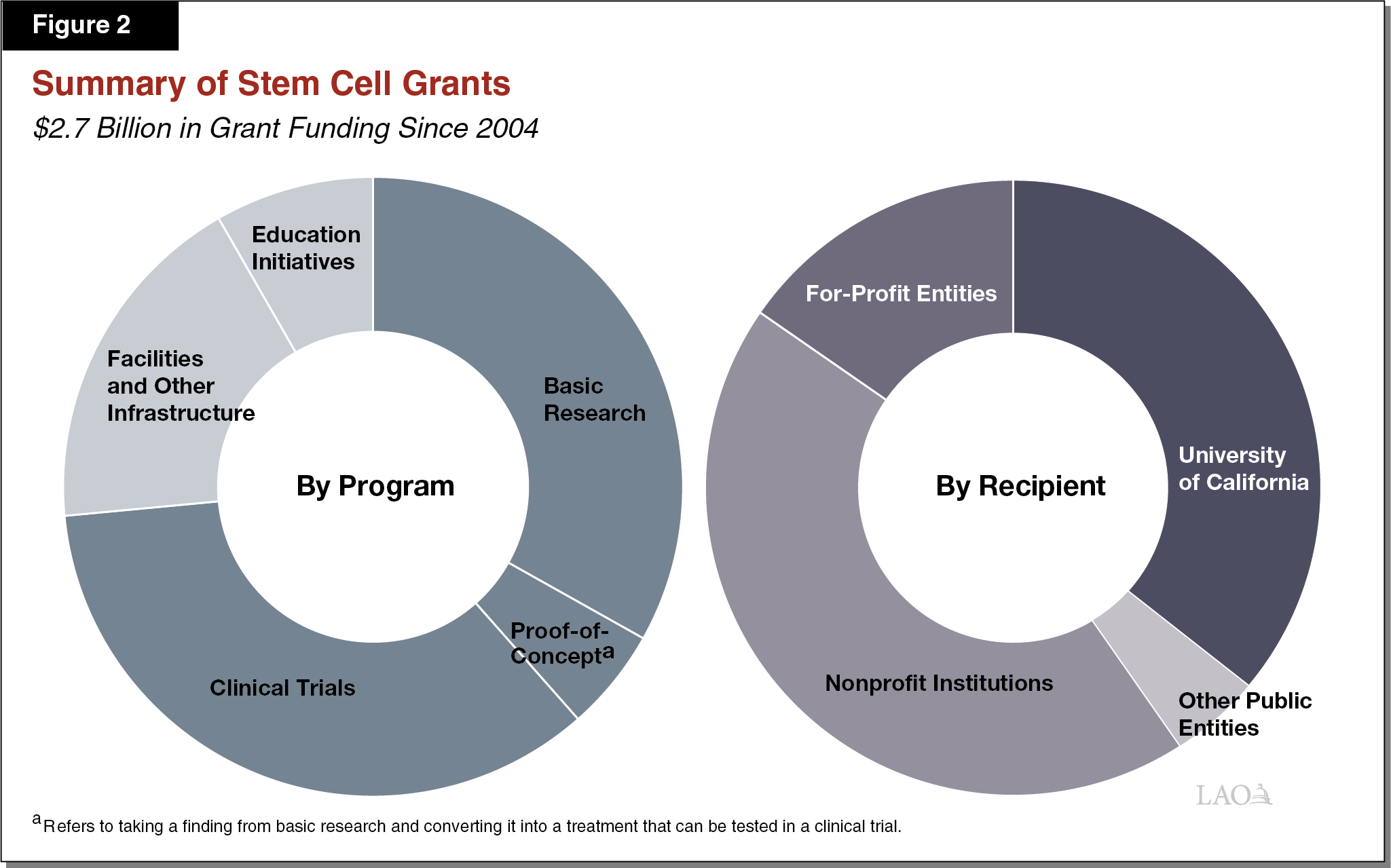 CIRM Used a Small Share of Bond Proceeds for Interest Payments. Typically, the state makes regular payments on general obligation bonds from the state General Fund. Proposition 71 required the state to take a somewhat different approach. For the first five years after receiving voter approval, the measure required CIRM to repay interest using the bonds’ proceeds. According to CIRM, a total of about $70 million of bond proceeds were spent on interest costs from 2004 through 2009. In 2010, the state began paying the remaining principal and interest from the General Fund. Currently, the state is spending $327 million annually from the General Fund to make debt payments on Proposition 71 bonds.

Small Amount of Funding Spent on Bond Issuance Costs. Typically, certain administrative and legal costs are associated with a bond issuance. Proposition 71 specified that bond proceeds were to cover these administrative costs. CIRM reports using $2.6 million in bond proceeds for these costs.

Grant Recipients Have Contributed Matching Funds to Their Projects. Many of CIRM’s programs require a match from grant recipients. The amount of funding that applicants must match varies by program. To cover their match, grants recipients can rely on a number of different fund sources, including philanthropic donations, federal grants, and industry contributions. Many recipients raise more funding than required. According to CIRM, grant recipients report collecting a combined $4.1 billion in matching funds since 2004.

Grantees Are Required to Share Invention-Related Income With the State. Some stem cell research is expected to lead to new inventions, including new medical technology and treatments. Proposition 71 established an expectation that grant recipients share a portion of the income resulting from licensing or commercializing these inventions with the state. The state’s share of the income is deposited into the state General Fund (the state’s main operating account), which is available to support any state program. Over the years, CIRM’s governing board has developed specific revenue-sharing policies. Since 2004, grant recipients have contributed $352,560 in total invention-related income to the state.

Authorizes $5.5 Billion in Bonds for Stem Cell Activities. The proposed measure would authorize new bonds to fund additional grants and CIRM operations. As Figure 3  (see next page) shows, the measure limits the amount of funds CIRM can spend on its operations. In addition, the measure sets aside a portion of bond funds for certain grant programs, such as grants for research projects that are aimed at developing treatments and cures for diseases affecting the brain and nervous system. For a few of these programs, CIRM’s governing board would be required to prioritize grant applications that offer matching funds and ensure grant awardees are distributed across the state.

Establishes Certain Rules and Guidelines Relating to the Bonds. The measure would limit the amount of bonds the state could sell each year, with the goal of spreading bond sales over at least a ten-year period. For the first five years after the measure is enacted, bond proceeds would cover any interest payments on the issued bonds. Beginning January 1, 2026, the state would pay all remaining debt from the General Fund. The State Treasurer would decide the period over which to repay the bonds, with a maximum repayment period of 40 years.

Makes Numerous Changes to CIRM. The measure would make various changes to CIRM’s programs and governance structure. Figure 4 (see page 6) summarizes these changes. One notable change would be to refocus some of CIRM’s efforts toward improving patient access to stem cell treatments. Under the measure, CIRM would be allowed to hire up to 15 full-time equivalent employees to research and develop ways to improve access to treatments. A new working group of national experts would advise CIRM’s governing board on ways to improve access and affordability. Furthermore, the measure would require any revenue earned from revenue-sharing agreements to be used to offset patient costs for regenerative medicine treatments.

Total Estimated State Costs of $7.8 Billion. For the purposes of estimating the cost of the measure, we assume the bonds are sold over an initial ten-year period—the minimum period required by the measure. We assume each bond is repaid over 15 years, resulting in a total repayment period of 25 years. Though the typical repayment period for taxable bonds is ten years, we assume a somewhat longer period given the measure specifies that the Treasurer could decide to stretch repayments up to 40 years. Under these assumptions, we estimate the measure would cost a total of $7.8 billion—$5.5 billion in principal and $2.3 billion in interest. The average annual payment over the 25-year period would be $310 million. The costs would be higher or lower than our estimates depending on factors such as the interest rate and the period of time over which the bonds are repaid. 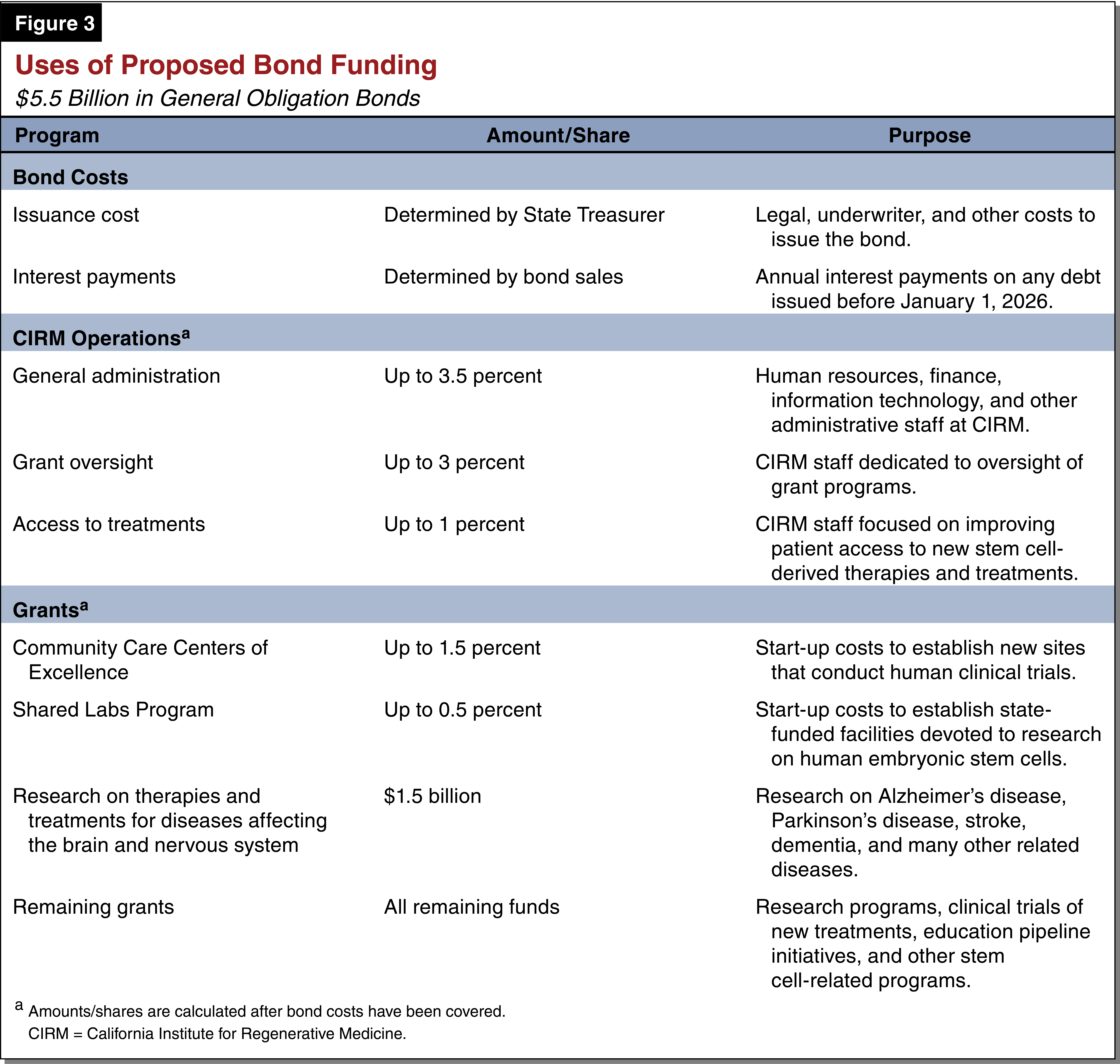 Likely Low Hundreds of Millions in Interest Payments Paid by Bond Proceeds. Under the measure, a portion of the $2.3 billion interest cost would be paid by the bond proceeds. The portion of interest repaid from the bond proceeds would depend on the timing of when the state begins issuing bonds and the interest rate at which the bonds are sold. Were the state to begin issuing bonds shortly after approval of the measure, CIRM would likely make interest payments totaling in the low hundreds of millions of dollars from bond proceeds by the end of 2025. 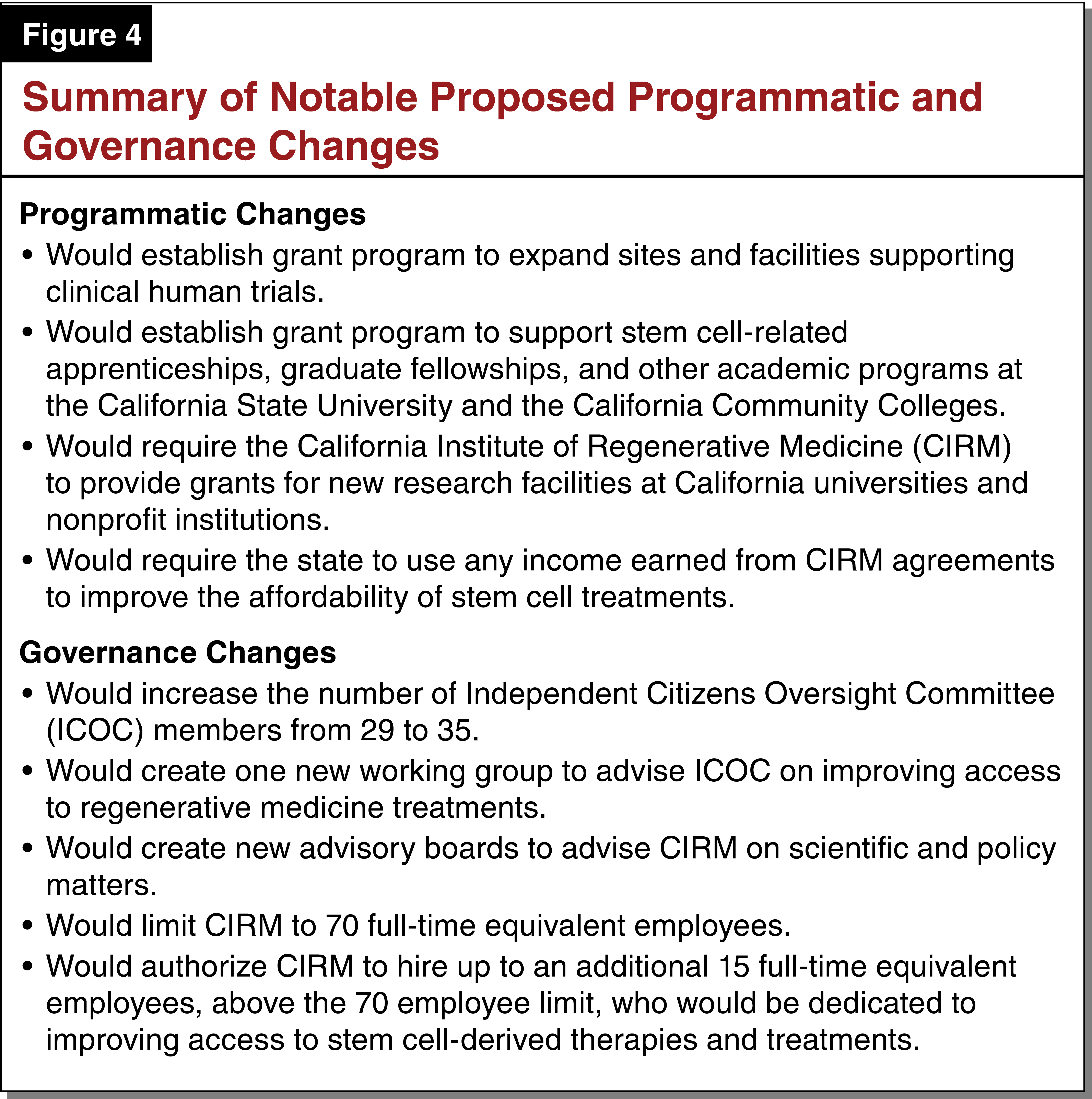 Difficult to Estimate Amount of Invention-Related Income Likely to Be Generated. To the extent CIRM funds new projects that result in licensed and commercialized products, the state would receive a portion of the resulting revenue. The amount of revenue received for this purpose is uncertain. Many times, research does not lead to an invention, but, in a few cases, inventions do result and are lucrative. Also, a significant amount of time typically elapses from an initial research project to commercializing an associated invention. To date, the state has collected only a few hundred thousand dollars in invention-related income. Past revenue collections, however, might not be a good indicator of future revenue for the reasons cited above.

Other Possible Fiscal Effects. The measure could result in numerous other indirect effects on state and local governments. For example, to the extent the measure results in new treatments that are more cost-effective than existing treatments, state and local governments could experience savings in some programs such as Medi-Cal, the state’s subsidized health care program for low-income people. The magnitude of these and other indirect effects is unknown.

Summary of Fiscal Effects. This measure would have the following major, direct fiscal effects: