Pursuant to Elections Code 9005, we have reviewed the proposed statutory initiative related to the minimum wage (A.G. File 21-0043, Amendment #1).

Inflation Adjustments Scheduled Under Current Law. The prices of goods and services tend to rise over time. These rising prices are called “inflation.” Under current law, the state will adjust its minimum wage every year, starting in 2024. Each adjustment will reflect U.S. inflation, except in two cases:

Minimum Wage Changes Affect Other Laws. Some other laws about work and pay are based on the state minimum wage. For example, to be exempt from certain overtime pay laws, an employee must make at least double the minimum wage. Changes in the minimum wage affect these requirements.

Annual Minimum Wage Increases Through 2026. The measure would increase the state minimum wage over several years. By 2026, the minimum wage would be $18 for all workers. Figure 1 shows the proposed minimum wage in each year. As under current law, the Governor could postpone these increases under some conditions. 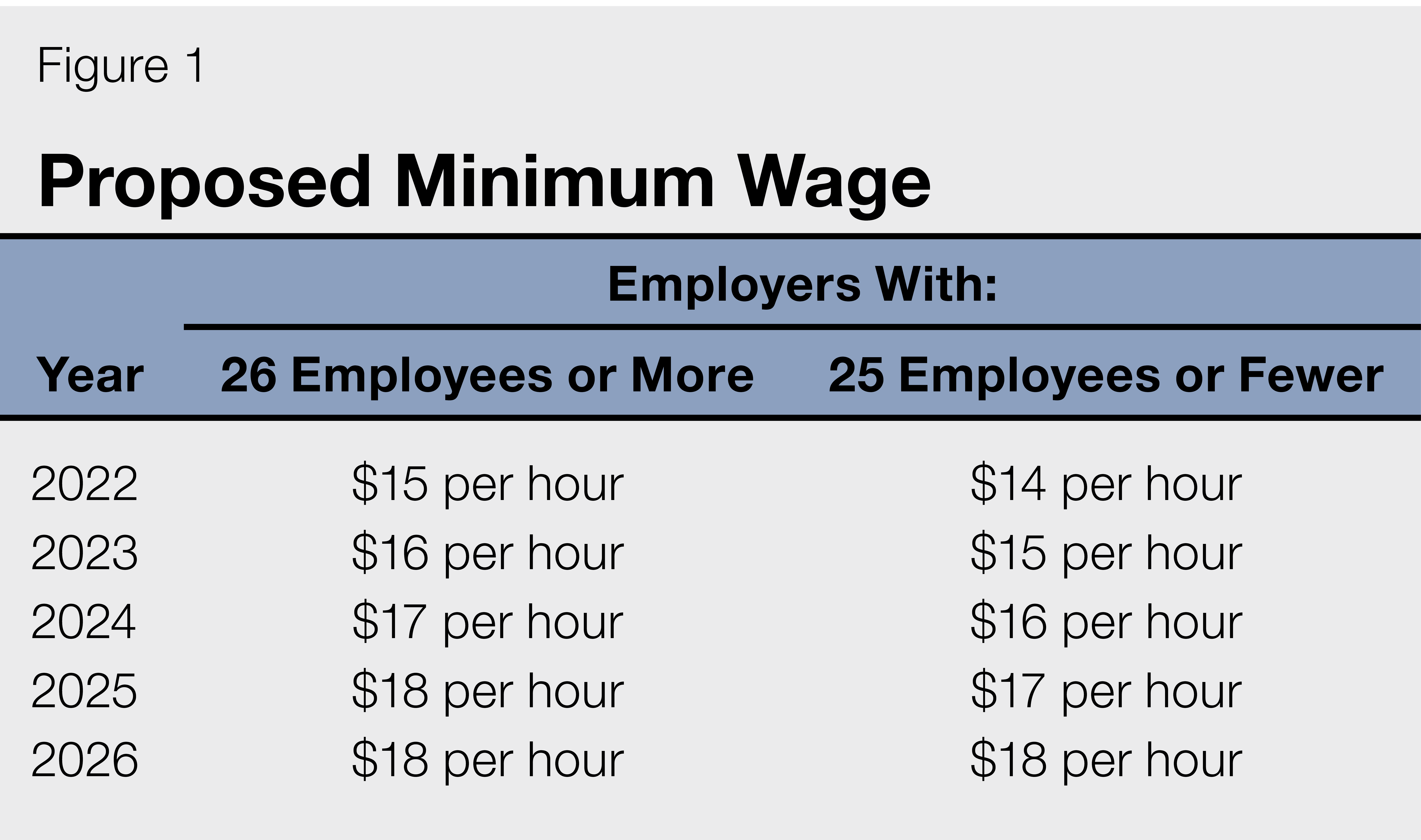 This section describes the fiscal effects of the $18 per hour minimum wage.

Fiscal Effects Depend on Economic Effects. The measure could have a wide range of economic effects:

Increased Government Costs to Pay for Workers. The state and many local governments would have higher costs to pay their employees. They also would have higher costs to pay for work done by workers who are not government employees. These costs likely would total a few billion dollars per year. (In the most recent fiscal year, total spending by California’s state and local governments was roughly $500 billion.)

Savings From Lower Enrollment in Health and Human Services Programs. The measure would change the number of people enrolled in health and human services programs because it would change people’s incomes. Many people would have higher incomes due to wage increases, but some likely would have lower incomes due to job losses. Overall, these enrollment changes likely would reduce state and local costs by hundreds of millions of dollars to over $1 billion annually.

Overall, whether the measure would make tax revenues go up or down is unclear. Revenue changes likely would be between a loss of a couple billion dollars and a gain of a few hundred million dollars. (In the most recent fiscal year, total state and local revenue from these taxes was roughly $200 billion.)

Summary of Fiscal Effects. We estimate that this measure could have the following major fiscal effects on the state and local governments: