A YES vote on this measure means: Allows the state to sell $4 billion in general obligation bonds to fund veterans and affordable housing.

A NO vote on this measure means: The state could not sell $4 billion in general obligation bonds to fund veterans and affordable housing.

Fiscal Impact: Increased state costs to repay bonds averaging about $170 million annually over the next 35 years.

Housing Is Expensive in California. Housing in California has long been more expensive than most of the rest of the country. While many factors have a role in driving California's high housing costs, the most important is the significant shortage of housing, particularly within coastal communities. A shortage of housing means households wishing to live in the state compete for limited housing. This competition increases home prices and rents. Today, an average California home costs 2.5 times the national average. California’s average monthly rent is about 50 percent higher than the rest of the country.

State Housing Programs Fund Some Home Building. In most years, about 100,000 houses and apartments are built in California. Most of these housing units are built entirely with private dollars. Some, however, receive financial help from federal, state, or local governments. In these cases, the state provides local governments, nonprofits, and private developers with grants or low-cost loans to fund a portion of the housing units’ construction costs. Typically, housing built with these funds must be sold or rented to Californians with low incomes. A portion of housing units built with state funds is set aside for homeless Californians. While the state historically has not provided ongoing funding for these housing programs, California receives approximately $2 billion annually from the federal government to support these projects.

Home Loan Program for Veterans. The state’s veteran home loan program provides home loans to eligible veterans, including veterans who may not otherwise qualify for a home loan. Under the program, the state sells general obligation bonds to investors and uses the funds to provide loans to eligible veterans to purchase homes. Participating veterans repay the state for these home loans. These funds are then used to repay the bonds.

New General Obligation Bonds for Housing. This measure allows the state to sell $4 billion in new general obligation bonds for various housing programs. (For more information on the state’s use of bonds, see “Overview of State Bond Debt” later in this guide.)

As shown in Figure 1, the measure provides bond funding for various housing programs, which are described below in more detail. 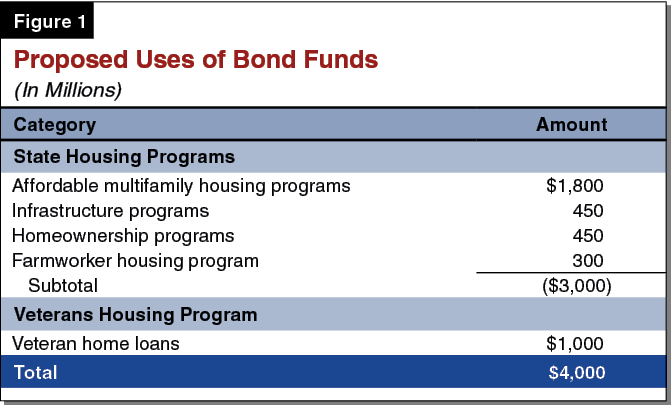 State Housing Programs. The measure provides $3 billion for various state housing programs. Proceeds from the bond sale would be awarded to program applicants—local governments, nonprofit organizations, and private developers—through a competitive process administered by the state.

Bond Cost for State Housing Programs. This measure would allow the state to borrow up to $3 billion by selling general obligation bonds to investors, who would be repaid with interest from the state’s General Fund. The cost of these bonds would depend on various factors—such as the interest rates in effect at the time they are sold, the timing of the bond sales, and the time period over which they are repaid. We estimate that the cost to taxpayers to repay the bonds would average about $170 million annually for 35 years—totaling $5.9 billion to pay off both the principal ($3 billion) and interest ($2.9 billion). This amount is about one-tenth of 1 percent of the state’s current General Fund budget.

Bond Cost for Veterans Housing Program. This measure would allow the state to borrow up to $1 billion by selling general obligation bonds to investors. Veterans participating in the home loan program would make monthly payments to the state, allowing the state to repay the bonds. These payments have always covered the amount owed on the bonds, meaning the program has always operated at no direct cost to the state.

How Many People Could the Measure Help? The funds from this measure typically would be used together with other government monies to provide housing assistance. In many cases, the measure would allow the state to receive additional federal funding for affordable housing. In total, the bond funds would provide annual subsidies for up to 30,000 multifamily and 7,500 farmworker households. The funds also would provide down payment assistance to about 15,000 homebuyers and home loans to about 3,000 veterans. In some cases, such as for the down payment assistant programs, Californians could quickly begin to benefit from the bond funding. In other cases, such as for the construction of new affordable multifamily housing, it could take several years for Californians to benefit from the measure.