A YES vote on this measure means: There would be new minimum requirements on farmers to provide more space for egg-laying hens, breeding pigs, and calves raised for veal. California businesses would be banned from selling eggs or uncooked pork or veal that came from animals housed in ways that did not meet these requirements.

Agriculture Is a Major Industry in California. California farms produce more food—such as fruit, vegetables, nuts, meat, and eggs—than in any other state. Californians also buy food produced in other states, including most of the eggs and pork they eat. The California Department of Food and Agriculture (CDFA) is responsible for promoting California agriculture and overseeing animal health and food safety.

State Law Bans Cruelty to Animals. For over a century, the state has had laws banning the mistreatment of animals, including farm animals. For example, anyone who keeps an animal in an enclosed area is required to provide it with an exercise area and give it access to shelter, food, and water. Depending on the specific violation of these requirements, a person could be found guilty of a misdemeanor or felony, either of which is punishable by a fine, imprisonment, or both.

Farm Animal Practices Are Changing. There has been growing public interest in the treatment of farm animals. In particular, concerns have been expressed about keeping farm animals in cages and crates. Partly in response to these concerns, various animal farming associations have developed guidelines and best practices to improve the care and handling of farm animals. Also in response to these concerns, many major grocery stores, restaurants, and other companies have announced that they are moving towards requiring that their food suppliers give farm animals more space to move around (for example, by only purchasing eggs from farmers who use “cage-free” housing for hens).

Proposition 2 (2008) Created Standards for Housing Certain Farm Animals. Proposition 2 generally prohibits California farmers from housing pregnant pigs, calves raised for veal, and egg-laying hens in cages or crates that do not allow them to turn around freely, lie down, stand up, and fully extend their limbs. Under Proposition 2, anyone who violates this law is guilty of a misdemeanor.

State Law Banned the Sale of Eggs That Do Not Meet Housing Standards. A state law passed after Proposition 2 made it illegal for businesses in California to sell eggs that they knew came from hens housed in ways that do not meet Proposition 2’s standards for egg-laying hens. This law applies to eggs from California or other states. Any person who violates this law is guilty of a misdemeanor. (The law does not cover liquid eggs, which are egg yolks and whites that have been removed from their shells and processed for sale.)

Creates New Standards for Housing Certain Farm Animals. This measure (Proposition 12) creates new minimum requirements on farmers to provide more space for egg-laying hens, breeding pigs, and calves raised for veal. These requirements, which apply to farm animals raised in California, would be phased in over the next several years. Figure 1 shows the specific requirements for each animal, when they would be phased in, and how they compare to current law. 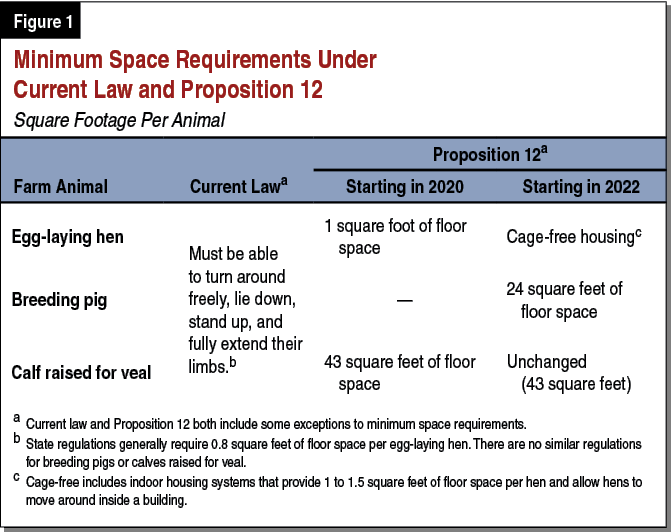 Bans the Sale of Products That Do Not Meet New Housing Standards. The measure also makes it illegal for businesses in California to knowingly sell eggs (including liquid eggs) or uncooked pork or veal that came from animals housed in ways that do not meet the measure’s requirements. This sales ban applies to products from animals raised in California or out-of-state. The sales ban generally does not apply to foods that have eggs, pork, or veal as an ingredient or topping (such as cookie dough and pizza). Violation of the housing requirements or sales ban would be a misdemeanor, and a violation of the sales ban could also be subject to a fine in civil court. This measure also requires CDFA and the California Department of Public Health to write regulations to implement its requirements.

Consumer Prices Likely to Increase. This measure would likely result in an increase in prices for eggs, pork, and veal for two reasons. First, this measure would result in many farmers having to remodel or build new housing for animals—such as by installing cage-free housing for hens. In some cases, this housing also could be more expensive to run on an ongoing basis. Much of these increased costs are likely to be passed through to consumers who purchase the products.

Second, it could take several years for enough farmers in California and other states to change their housing systems to meet the measure’s requirements. If in the future farmers cannot produce enough eggs, pork, and veal to meet the demand in California, these shortfalls would lead to an increase in prices until farmers can meet demand.

As discussed above, many companies have announced that they are moving towards requiring that their food suppliers give farm animals more space to move around (such as by buying only cage-free eggs). To the extent that this happens, some of the price increases described above would have occurred anyway in future years.

Small Reduction in State Government Revenues. Because this measure would increase costs for some California farmers who produce eggs, pork, and veal, some of them could choose to stop or reduce their production. To the extent this happens, there could be less state income tax revenues from these farm businesses in the future. The reduction statewide likely would not be more than several million dollars each year.

State Oversight Costs. CDFA would have increased workload to enforce this measure. For example, the department would have to check that farmers in California and other states that sell to California use animal housing that meets the measure’s requirements. CDFA would also make sure that products sold in California comply with the measure’s requirements. The cost of this additional workload could be up to $10 million annually.