Propositions on the November 3, 2020 Ballot

A YES vote on this measure means: The state could sell $5.5 billion in general obligation bonds primarily for stem cell research and the development of new medical treatments in California.

A NO vote on this measure means: The state could not sell $5.5 billion in general obligation bonds primarily for stem cell research and the development of new medical treatments in California. 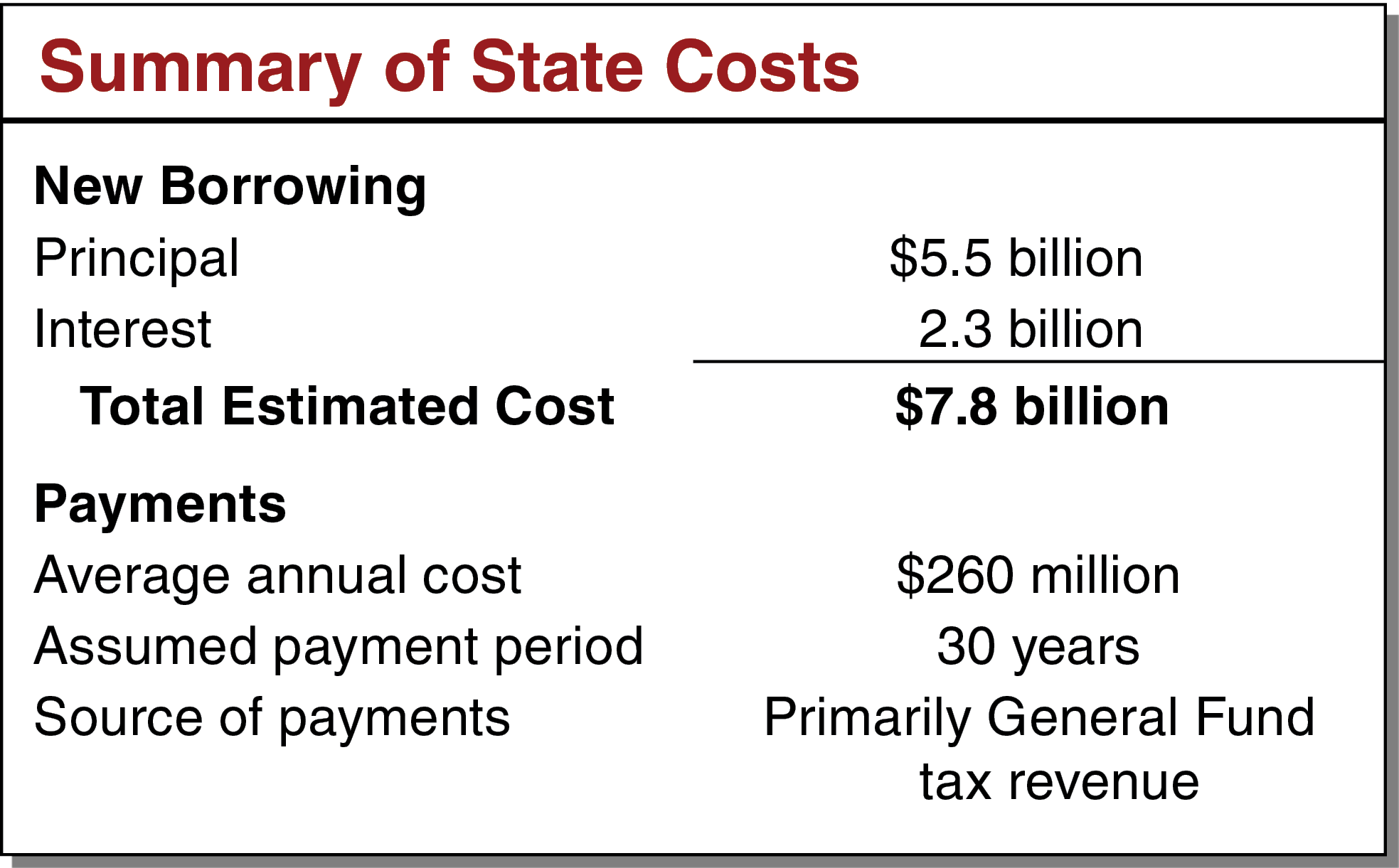 Fiscal Impact: Increased state costs to repay bonds estimated at about $260 million per year over the next roughly 30 years.

Researchers Use Stem Cells to Study and Treat Many Diseases. Stem cells are certain types of cells that exist within humans. Researchers are interested in stem cells for their potential to regenerate cells, tissues, and organs, thereby potentially helping to treat or cure certain diseases. Researchers engaged in “regenerative medicine” are focused on addressing many diseases, including Alzheimer’s disease, HIV/AIDS, stroke, diabetes, and cancer.

Voters Approved Earlier Stem Cell Ballot Measure. In 2004, voters approved Proposition 71, which added a provision to the State Constitution affirming the right of researchers in California to conduct stem cell research. The measure also created the California Institute for Regenerative Medicine (CIRM), primarily for the purpose of providing grants to universities and other entities in California to support stem cell research, development of new treatments, clinical trials, new research facilities, and other related activities. The measure also established (1) a governing board to adopt CIRM policies and allocate grant funds, (2) three advisory working groups to help guide the governing board on certain matters, and (3) an independent oversight committee to review CIRM’s finances.

Measure Allowed State to Issue General Obligation Bonds. Proposition 71 allowed the state to sell $3 billion in general obligation bonds, which are a form of borrowing. The state sold the bonds to investors, and the money generated from these sales funded CIRM grants and operations. After selling bonds, the state has been repaying investors with interest over many years. As is typically the case with these kinds of bonds, the state has made most debt payments from the General Fund—the state’s main operating account, which pays for education, prisons, health care, and other public services. The measure required that a small amount of interest be paid by funds from the bond sales. (For more information on the state’s use of bonds, see “Overview of State Bond Debt” later in this guide.)

Grants Have Funded Several Purposes. Figure 1 shows how CIRM has used its grant funding. Funded projects have involved conducting basic science research (such as laboratory research on stem cells), developing potential treatments, and undertaking clinical trials. Grant funds also have supported other activities, including construction of new research facilities and research internships for college students. The University of California has received the greatest amount of grant funding, followed by private nonprofit universities and institutions (such as Stanford University). In addition to receiving a grant from CIRM, many grant recipients receive additional funding from other sources for their projects. Other common fund sources are industry contributions, private donations, and federal grants. 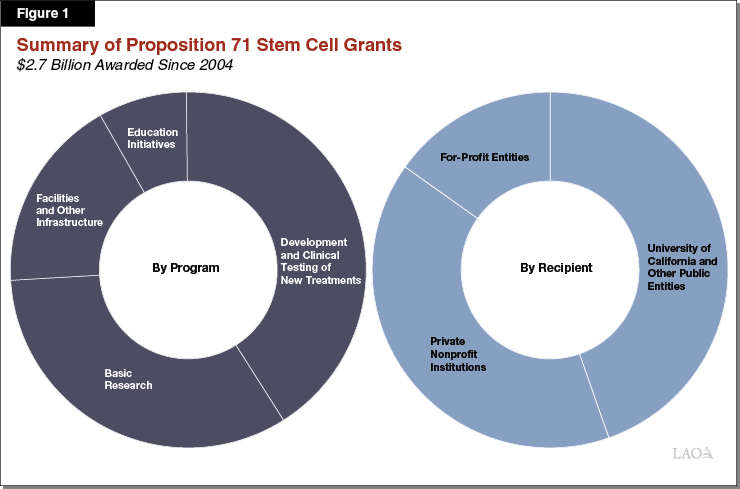 Grant Recipients Are Required to Share Invention-Related Income With the State. Some stem cell research can lead to new inventions, including new medical technologies and treatments. Proposition 71 required grant recipients who license or sell their inventions to share a portion of the resulting income with the state. The state’s share of the income is deposited into the General Fund and may be used to support any state program. Over the years, CIRM’s governing board has developed rules for how income revenue is shared with the state. The state began receiving income from CIRM-funded inventions in 2017. To date, these inventions have provided of total of approximately $350,000 to the state.

CIRM Has Spent Nearly All Available Funds. As of June 2020, CIRM had spent most of its Proposition 71 funds. According to CIRM, around $30 million remains available for grants. As it nears the end of its funding, CIRM has been decreasing its staffing. The institute currently employs 35 full-time staff, down from its peak of over 50 full-time staff. It plans to maintain some staff for the next few years as remaining projects are completed.

Authorizes New Bonds for Stem Cell Activities. Proposition 14 allows the state to sell $5.5 billion in general obligation bonds. The bonds primarily would fund additional grants to support research and the development of treatments (including clinical trials) for many diseases. The proposition sets aside at least $1.5 billion specifically to research and develop treatments for diseases affecting the brain and central nervous system (such as Alzheimer’s disease and Parkinson’s disease). The proposition directs CIRM to allocate a small share of grant funding for training opportunities for students at the California State University and the California Community Colleges, as well as a small share for helping to establish and support facilities focused on research and clinical trials. For some types of grants, CIRM would be required to ensure grant recipients are located across the state and prioritize applicants that offer matching funds. The proposition allows CIRM to spend no more than 7.5 percent of bond funds on its administrative costs.

Makes Numerous Changes to CIRM. Most notably, the proposition makes several changes intended to improve patient access to stem cell treatments. The proposition allows CIRM to hire up to 15 full-time employees specifically for developing policies and programs relating to improving access to and affordability of treatments for patients. (The institute would be allowed up to 70 full-time employees for other operational purposes.) A new advisory working group of experts would support CIRM’s governing board in these matters. Further, any invention-related revenue that is deposited into the General Fund would be used to help pay for patients’ regenerative medicine treatments. Among various other changes, the proposition also increases the number of members on CIRM’s governing board from 29 to 35.

Total Estimated State Costs of $7.8 Billion. The cost to repay the bonds authorized by this proposition depends on various factors, such as the interest rates on the bonds and the time period over which they are repaid. We estimate the total cost to pay off the bonds would be $7.8 billion—$5.5 billion for the principal and $2.3 billion for the interest. State costs would average about $260 million per year for about 30 years. This amount is less than 1 percent of the state’s current General Fund budget.

Difficult to Estimate Invention-Related Income Available for Patients’ Treatment Costs. The amount of revenue from new inventions that would be available to the state for helping to cover costs for patients’ regenerative medicine treatments is uncertain. Many times, research does not lead to an invention. Also, a significant amount of time typically passes from starting a research project to licensing or selling an associated invention. To date, the state has collected a few hundred thousand dollars in invention-related income. Past revenue collections, however, might not accurately predict future revenue.