Tribal-State Compacts. Native American tribes have certain rights under federal law to govern themselves, such as certain rights to offer gambling. This means that the state generally cannot regulate tribal gambling except as allowed by (1) federal law and (2) federally approved agreements between a tribe and state (known as tribal-state compacts). When a tribe wants to offer gambling on its lands, federal law requires that the state negotiate a compact with the tribe. If the tribe and the state cannot agree, the federal government may issue a compact instead. In California, compacts allow tribal casinos to offer slot machines and other games on tribal lands. These compacts lay out how gambling will be regulated. They also require certain payments, such as to the state and local governments. California currently has compacts with 79 tribes. Tribes can ask for these compacts to be changed, such as when new types of gambling become legal in the state.

Annual Required Education Spending. The California Constitution requires the state to spend a minimum amount on K-12 schools and community colleges each year. This minimum amount grows over time based on growth in state tax revenues, the economy, and student attendance. The state’s current budget includes $110 billion to meet this requirement. The state General Fund currently provides more than $80 billion towards this amount. (The General Fund is the state’s main operating account, which pays for education, prisons, health care, and other public services.) Local property taxes also are used to meet this minimum amount.

Allows In-Person Sports Betting at Racetracks and Tribal Casinos. Proposition 26 changes the California Constitution and state law to allow the state’s privately operated racetracks and tribal casinos to offer sports betting. However, the proposition bans bets on certain sports—such as high school games and games in which California college teams participate. Figure 1 shows the locations that could choose to offer sports betting. 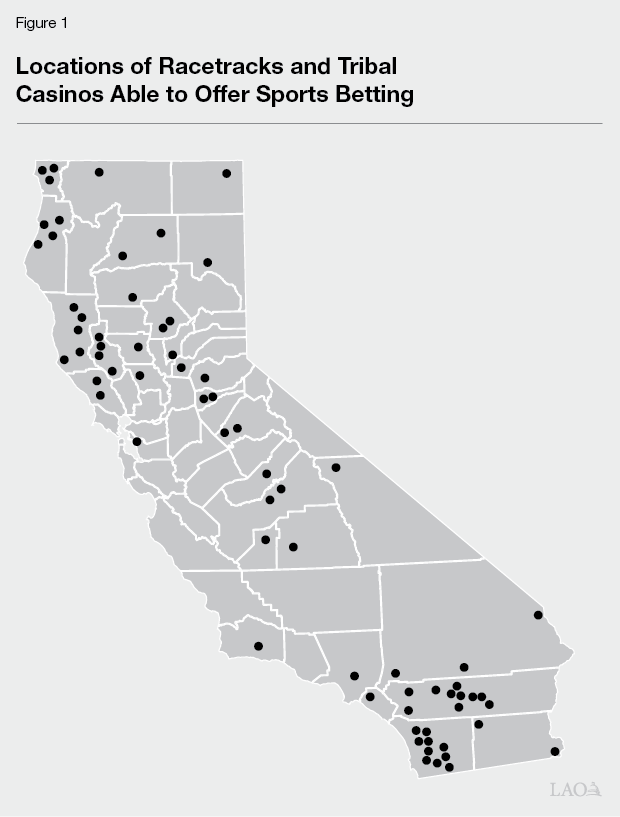 Requires Specific Use of CSWF Revenues. Proposition 26 requires CSWF revenues be considered state tax revenues to calculate the minimum amount of spending on K-12 schools and community colleges each year. This means CSWF monies would first be used to help meet this required spending level on education. The proposition requires that monies next be used to support state regulatory costs. Remaining monies would be used in three ways: (1) 15 percent for gambling addiction and mental health programs and grants, (2) 15 percent for sports betting and gambling enforcement costs, and (3) 70 percent to the state General Fund.

Allows Additional Gambling at Tribal Casinos. Proposition 26 changes the California Constitution to allow roulette and games played with dice at tribal casinos. Before offering these games, tribal compacts with the state would need to be changed to allow them to do so.

Adds New Enforcement Method. Proposition 26 adds a new way to enforce certain state gambling laws, such as laws banning certain types of card games. Specifically, it allows people or entities that believe someone is breaking these laws to file a civil lawsuit in state trial courts. This lawsuit can ask for penalties of up to $10,000 per violation. It can also ask for the court to stop the behavior. These civil lawsuits would be allowed only if the person or entity filing it first asks DOJ to act and either (1) DOJ does not file a court case within 90 days or (2) a court rejects the case filed by DOJ and does not prohibit it from being filed again. Penalties collected would go into the CSWF for the purposes laid out above.

Proposition 26 would impact both state and local government revenues and costs. The actual size of these effects, however, is uncertain and would depend on how the proposition is interpreted and implemented. For example, it is unclear if tribal-state compacts changed to allow for sports betting would require additional payments to local governments. The fiscal effects would also depend on the number of people who choose to make sports bets and how often the new civil enforcement method is used.

Increased State Revenues. Proposition 26 would increase state revenues from racetrack and tribal sports betting payments as well as civil penalties. The size of this increase is uncertain, but could reach tens of millions of dollars annually. Some of this revenue would be new. For example, the state currently does not receive any share of illegal sports bets. This means the state would receive new revenue when people make sports bets legally rather than illegally. However, some of this revenue would not be new. For example, the state currently receives revenue when people spend money on certain things, such as lottery games or shopping. This means the state might not receive new revenue when people spend less on those things so they could make sports bets.

Some of the increased revenue would go into the CSWF. This would result in a higher minimum amount of spending on K-12 schools and community colleges than would otherwise be required. About 40 percent of CSWF money would likely be used to meet this higher minimum spending amount. The remaining 60 percent would be used for sports betting and gambling-related costs as well as other state spending priorities.

Effects on Local Government Revenues. Proposition 26 could impact local government revenues. For example, cardrooms may earn less revenue if they are negatively impacted by the new civil enforcement method. This could reduce the taxes and fees they pay to the cities where they are located. The effects on most local governments would likely not be large. However, there could be larger effects on a few local governments that receive a large share of their revenue from cardrooms. For example, one city estimates cardroom payments are about 70 percent of its General Fund revenues. At the same time, tribal-state compacts changed to allow for sports betting could require additional tribal payments to local governments.

Increased State Regulatory Costs. Proposition 26 would create more work for state agencies (such as DOJ) to regulate sports betting. The amount of work would depend mostly on how sports betting is regulated, such as what types of bets are not allowed. Total costs for this additional work could reach the low tens of millions of dollars annually. Some or all of these costs would be offset by CSWF revenues and tribal payments to the state that do not go into the CSWF.

Increased State Enforcement Costs. The new civil enforcement method would create more work for DOJ and the state courts. DOJ would need to review and respond to claims that gambling laws are being broken. State courts would also need to process any civil lawsuits filed. Total state enforcement costs would depend largely on how often the new civil enforcement method is used. However, these increased costs would not likely exceed the low millions of dollars annually. This amount is less than one-half of 1 percent of the state’s total General Fund budget. Some of these costs could be offset by CSWF revenues.