A YES vote on this measure means: The state could sell $8.9 billion in general obligation bonds to fund various water and environmental projects.

A NO vote on this measure means: The state could not sell $8.9 billion in general obligation bonds to fund various water and environmental projects.

Californians Get Water From Several Sources. Most of the water used for drinking and farming in California comes from rain and melted snow. Rain and snow flow into streams and rivers, many of which start in the mountains. The areas where these streams and rivers begin are referred to as “watersheds.” California has built dams, reservoirs, and canals to store water and deliver it around the state. Water is also pumped from underground (referred to as “groundwater”), especially during dry years when not as much rain and snow falls. A small share of the state’s water comes from other sources, such as cleaning and reusing the wastewater that households and businesses send into sewers (referred to as “water recycling”).

Most Spending on Water Is by Local Governments. Local government agencies—usually water districts, cities, and counties—fund most of the projects that provide clean water for people to drink, supply water for farming, and protect communities from floods. These agencies spend about $25 billion each year on these types of water-related activities. Residents pay for the majority of this spending when they pay their water and sewer bills.

Voter-Approved Bonds Are a Common Source of State Funding for These Projects. The state mainly uses general obligation (GO) bonds and the state’s General Fund to pay for water and environmental projects. GO bonds are a way to borrow money. Voters give the state permission to sell bonds to investors, and the state uses that money as “up-front” funding for projects. The state then repays the investors over time, with interest, from the General Fund—the state’s main operating account, which also pays for education, prisons, health care, and other services. (For more information on the state’s use of bonds, see “Overview of State Bond Debt” later in this guide.)

Since 2000, voters have approved about $31 billion in GO bonds in statewide elections to pay for different types of water and environmental projects. Of this amount, roughly one-third was still available to pay for new projects as of June 2018. This includes $4 billion that was approved by voters through Proposition 68 in June 2018.

$8.9 Billion Bond for Water and Environmental Projects. This proposition allows the state to sell $8.9 billion in new GO bonds for various water and environmental projects. These funds fall into six broad categories, as summarized in Figure 1. 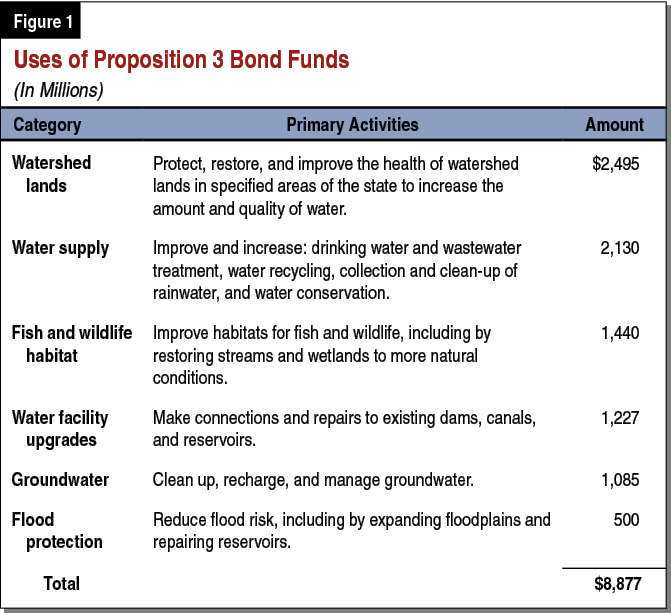 Within these broad categories, the proposition includes around 100 subcategories for how certain amounts must be spent, including for particular regions of the state or on specific projects. The proposition’s broad spending categories include the following:

Distributes Most Funding Through Grants. The proposition provides funding to more than a dozen different state departments. The proposition continuously appropriates the bond funds to these departments, which is different from most water and environmental bonds. This means that the Legislature would not spend the funds in the annual state budget. Instead, departments would automatically receive funding when they are ready to spend it. Departments would spend some of the funds to carry out projects themselves. However, almost all of the funds would be given as grants to local government agencies, Indian tribes, nonprofit organizations, and private water companies for specific projects. For some funding subcategories—particularly those related to increasing or protecting water supply—grant recipients would have to provide at least $1 in local funds for each $1 of grant funding they receive.

Provides Greenhouse Gas (GHG) Funds for Water Projects. Separate from the $8.9 billion bond, this proposition also changes how the state must spend some existing funding related to GHGs. The state has passed laws to reduce global warming by limiting the amount of GHGs that are released in California. These efforts include the “cap-and-trade” program, which requires some companies and government agencies to buy permits from the state to release GHGs. The program causes some water agencies to have higher electricity costs to operate parts of their water delivery systems, such as pumps and water treatment plants. This proposition requires that a portion of the funding the state receives from the sale of permits be provided to four water agencies—the state Department of Water Resources, the Metropolitan Water District of Southern California, the Contra Costa Water District, and the San Luis and Delta Mendota Water Authority. The amount of funding would be equal to each agency’s additional electricity costs associated with state programs to reduce GHGs. We estimate these costs could total tens of millions of dollars annually. (In the most recent year, the state has received $3 billion from the sale of permits.) The agencies would be required to spend the funds they receive on such activities as water conservation programs. As such, these funds would no longer be available for the state to spend on other activities.

State Bond Costs. This proposition would allow the state to borrow $8.9 billion by selling additional GO bonds to investors. These investors would be repaid with interest using the state’s General Fund tax revenues. The cost of these bonds would depend on various factors—such as the interest rates in effect at the time they are sold, the timing of bond sales, and the time period over which they are repaid. We estimate that the cost to state taxpayers to repay this bond would total $17.3 billion to pay off both principal ($8.9 billion) and interest ($8.4 billion). This would result in average costs of about $430 million annually over the next 40 years. This amount is about one-third of 1 percent of the state’s current General Fund budget.

On balance, we estimate that this proposition would result in savings to local governments to complete the projects funded by this bond. These savings could average a couple hundred million dollars annually over the next few decades. The exact amount would depend on which specific projects local governments choose and their share of the total project costs.