California Personal Income Taxes. The state collects a tax on personal income earned within the state. Last year, the personal income tax raised over $130 billion in revenue. Most of the revenue helps pay for education, prisons, health care, and other public services.

Zero-Emission Vehicle Programs. The state has goals to limit greenhouse gas emissions that contribute to climate change, such as carbon dioxide from burning fossil fuels. To help meet these goals, the state has programs that promote zero-emission vehicles (ZEVs)—or vehicles that do not release pollution from the tailpipe. Examples of ZEVs include electric cars and hydrogen fuel cell cars. The state requires ride-sharing companies (such as Uber and Lyft) to use an increasing number of ZEVs for their services. The state also gives some funding to help households, businesses, and governmental agencies buy new ZEVs and install fueling infrastructure, such as charging stations for electric cars.

Wildfire Response and Prevention Programs. The state has the main responsibility for wildfire response activities—commonly known as firefighting—on about one-third of California’s land area. (The federal government and local agencies have the main responsibility for wildfire response everywhere else in California.) Wildfire response activities help limit the spread of large wildfires and stop them from damaging communities and harming residents. The state also runs wildfire prevention programs to reduce the chances that wildfires will start and to limit the damage they cause when they do occur. Some examples of wildfire prevention activities include removing trees from overgrown forests and clearing dead plants that are likely to catch on fire in areas near buildings.

Beginning January 2023, Proposition 30 requires taxpayers with incomes above $2 million each year (annually) to pay an additional tax of 1.75 percent on the share of their income above $2 million. This additional tax would end by January 2043. The tax could end several years earlier if California is able to drop its statewide greenhouse gas emissions below certain levels before then.

Proposition 30 requires that the revenue from the new tax go to increasing funding for ZEV programs and wildfire activities, as shown in Figure 1. The money would go to several state agencies to manage the programs and activities. 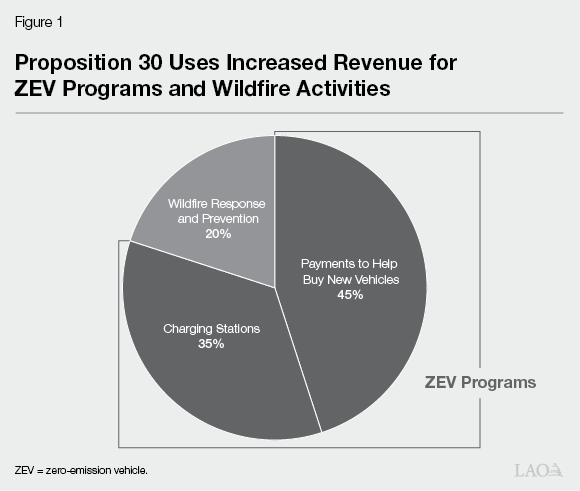 ZEV Programs (80 Percent). About 80 percent of the total revenue is for two ZEV program categories:

Increased State Tax Revenues From New Tax for ZEV Programs and Wildfire Activities. The new tax on high-income taxpayers typically would raise $3.5 billion to $5 billion annually, growing over time. This range reflects the changes in the incomes of high-income taxpayers. Their incomes often change greatly due to changes in the economy and stock market. Based on the spending requirements in Proposition 30, this funding would support:

Potential State and Local Effects From Increased ZEV Spending. The additional funding for ZEV programs under Proposition 30 could impact the number of ZEVs, as well as gasoline- or diesel-powered vehicles, being driven in California. However, the actual effect the proposition would have is uncertain for a variety of reasons. Most notably, while this analysis was being written, the state was considering requiring that car companies sell an increasing share of ZEVs in future years until 2035 when they would only be able to sell ZEVs. (The state was scheduled to decide on this requirement by August 2022.) This requirement is sometimes called a “ZEV mandate.” The proposition’s potential transportation-related fiscal effects on state and local governments depend on whether or not the ZEV mandate is approved.

Potential Decreased State and Local Costs for Wildfire Response and Recovery. Proposition 30 could somewhat decrease state and local government costs related to firefighting, clean-up, and recovery if the additional funding for wildfire activities ends up reducing the severity of future wildfires. However, any cost reductions would depend on (1) which specific wildfire activities end up being funded, (2) how effectively these activities reduce wildfire severity, and (3) the severity of wildfires that would have otherwise taken place in any specific year. All of these factors are uncertain, which makes the size of the potential fiscal effects on state and local governments unclear.

Decreased State Revenue for Other Activities. Some taxpayers probably would take steps to reduce the amount of income taxes they owe. This would reduce existing state revenues used to pay for activities not funded by Proposition 30. The degree to which this would happen and how much revenue the state might lose as a result is unknown.

Potential Reductions to Other State Programs to Comply With State Spending Limit. With some exceptions, such as responding to emergencies and building infrastructure, the California Constitution limits how much the state can spend. In recent years, state spending has reached this limit. Some of the spending required by Proposition 30—likely an amount ranging from about $1.5 billion to $3 billion annually—would count toward this limit. As a result, when state spending is at the limit, the proposition would require the state to reduce an equal amount of spending from other programs to “make room” for the new required spending on ZEV programs and wildfire activities.

A YES vote on this measure means: Taxpayers would pay an additional tax of 1.75 percent on personal income above $2 million annually. The revenue collected from this additional tax would support zero-emission vehicle programs and wildfire response and prevention activities.

A NO vote on this measure means: No change would be made to taxes on personal income above $2 million annually.