A YES vote on this measure means: The state could sell $1.5 billion in general obligation bonds for the construction, expansion, renovation, and equipping of certain hospitals that treat children.

A NO vote on this measure means: The state could not sell the $1.5 billion in general obligation bonds proposed for these purposes.

Fiscal Impact: Increased state costs to repay bonds averaging about $80 million annually over the next 35 years.

Other Hospitals Also Treat Children. Other hospitals in California that are not specifically identified as children’s hospitals in state law also focus to varying degrees on children’s health care. For example, some hospitals have wings or centers that specialize in treating children. These hospitals are often approved to treat children in the CCS program.

Previous Children’s Hospital Bond Measures. Voters have previously approved two statewide measures that authorized the state to issue general obligation bonds to pay for capital projects at children’s hospitals. These bonds have been used for a variety of projects including the construction of new buildings and the renovation of existing buildings. In 2004, Proposition 61 provided $750 million in bond funding. In 2008, Proposition 3 provided $980 million in bond funding. Only the 13 hospitals specifically identified as children’s hospitals in state law are eligible to receive funds under these previous measures. As of May 2018, most of the funding from the previous two measures had been committed to projects, with the remaining funds expected to be fully committed by the end of summer 2018. 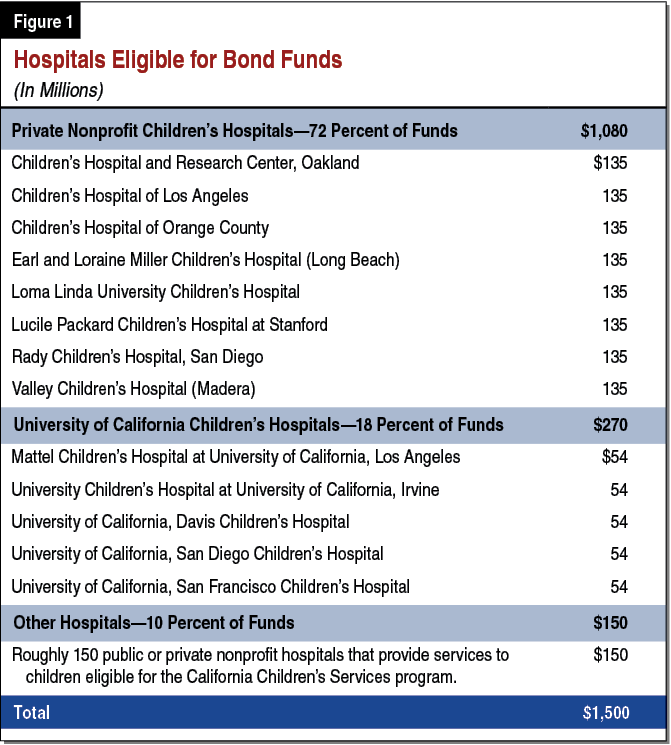 Use of Funds. The measure allows for the money raised from bond sales to be used for various purposes, including “construction, expansion, remodeling, renovation, furnishing, equipping, financing, or refinancing of eligible hospitals in the state.” The measure requires that the funds provided not exceed the total cost of a project and funded projects be completed within a “reasonable period of time.”

Application Process. Children’s hospitals eligible to receive bond funds under this measure would apply for funds to the California Health Facilities Financing Authority (CHFFA), an existing state agency. CHFFA would decide whether to award a grant based on several factors. Some of these factors include whether:

State Bond Repayment Costs. This measure would allow the state to borrow $1.5 billion by selling additional general obligation bonds to investors, who would be repaid, with interest, using the state’s general tax revenues. The cost of these bonds would depend on various factors—such as the interest rates in effect at the time they are sold, the timing of bond sales, and the time period over which they are repaid. We estimate that the cost to taxpayers to repay the bonds would total $2.9 billion to pay off both the principal ($1.5 billion) and interest ($1.4 billion). This would result in average repayment costs of about $80 million annually over the next 35 years. This amount is less than one-tenth of 1 percent of the state’s current General Fund budget. Administrative costs, paid from the bond funds, would be limited to CHFFA’s actual costs or 1 percent of the bond funds, whichever is less.