A YES vote on this measure means: The state could sell $9 billion in general obligation bonds for education facilities ($7 billion for K-12 public school facilities and $2 billion for community college facilities).

A NO vote on this measure means: The state would not have the authority to sell new general obligation bonds for K-12 public school and community college facilities.

Fiscal Impact: State costs of about $17.6 billion to pay off both the principal ($9 billion) and interest ($8.6 billion) on the bonds. Payments of about $500 million per year for 35 years.

California Has 8.3 Million Students Enrolled in Public K-14 Education. The public school system from kindergarten through grade 12 (K-12) currently has about 6.2 million students, 10,000 schools (including 1,100 charter schools), 950 school districts, and 58 county offices of education. The California Community Colleges currently have 2.1 million students at 113 campuses operated by 72 community college districts. The community colleges offer courses in English, other basic skills, and citizenship, as well as provide workforce training, associate degrees, and preparation for transfer to universities.

K-12 Public School Facility Projects Approved Through State Review Process. Under the state’s existing School Facilities Program, schools submit project proposals to the state’s Office of Public School Construction. The project proposals may be for buying land, constructing new buildings, and modernizing (that is, renovating) existing buildings. Schools are eligible for new construction funding if they do not have enough space for all current and projected students. Schools are eligible for modernization funding for buildings that are at least 25 years old.

Program Based Upon State and Local Partnership. In most cases, schools that receive state grant funding for approved projects must contribute local funding for those projects. For buying land and new construction projects, the state and local shares are each 50 percent of project costs. For modernization projects, the state share is 60 percent and the local share is 40 percent of project costs. If schools lack sufficient local funding, they may apply for additional state grant funding, up to 100 percent of the project cost, thereby reducing or eliminating their required local contributions.

Community College Facility Projects Approved in Annual Budget. Though community colleges also may receive state funding for buying land, constructing new buildings, and modernizing existing buildings, the process for submitting and approving projects is different than for K-12 facilities. To receive state funding, community college districts must submit project proposals to the Chancellor of the community college system. The Chancellor then decides which projects to submit to the Legislature and Governor, with projects approved as part of the state budget process and funded in the annual state budget act.

State Primarily Funds Public School and Community College Facilities Through General Obligation Bonds. The state typically issues general obligation bonds to pay for facility projects. A majority of voters must approve these bonds. From 1998 through 2006, voters approved four facility bonds that provided a total of $36 billion for K-12 facilities and $4 billion for community college facilities. Voters have not approved new state facility bonds since 2006. Today, the state has virtually no remaining funding from previously issued school and community college facility bonds. (For more information on the state’s use of bonds, see the “Overview of State Bond Debt” later in this voter guide.)

Districts Raise Local Funding for Facilities Mainly Through Local General Obligation Bonds. School and community college districts may sell local general obligation bonds to help cover the cost of facility projects. Districts must get at least 55 percent of their voters to approve the sale of these local bonds. Since 1998, school and community college districts have sold about $64 billion and $21 billion, respectively, in local general obligation bonds for facility projects.

A Few Other Local Funding Sources. In addition to local bonds, school districts can raise funds for school facilities by charging fees on new development. Since 1998, school districts have raised $10 billion from developer fees. (Community colleges do not have this revenue-raising option.) School and community college districts both can raise local funding for facilities using various other methods, including parcel taxes, but they use these other methods much less frequently.

As shown in Figure 1, this measure allows the state to sell $9 billion of general obligation bonds for public school and community college facilities. 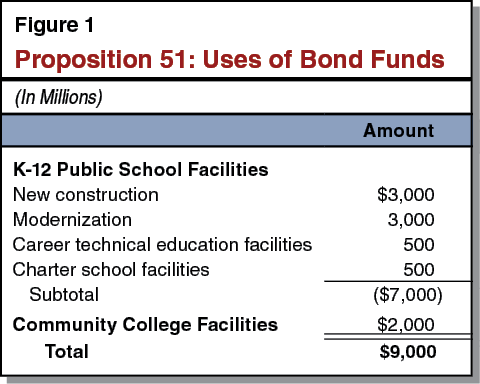 K-12 School Facilities. As shown in the figure, the $7 billion for K-12 school facilities is designated for four types of projects: new construction, modernization, career technical education facilities, and charter school facilities. The rules of the state’s existing school facility program would apply to these funds.

Community College Facilities. The $2 billion community college funding is for any facility project, including buying land, constructing new buildings, modernizing existing buildings, and purchasing equipment. Consistent with existing practice, the Legislature and Governor would approve specific community college facility projects to be funded with the bond monies in the annual budget act.

Measure Would Increase State Debt Service Costs. The cost to the state of issuing the proposed bonds would depend on the timing of the bond sales, the interest rates in effect at the time the bonds are sold, and the time period over which the bonds are repaid. The state likely would issue these bonds over a period of about five years and make principal and interest payments from the state's General Fund (its main operating account) over a period of about 35 years. If the bonds were sold at an average interest rate of 5 percent, the total cost to pay off the bonds would be $17.6 billion ($9 billion in principal plus $8.6 billion in interest). The average payment per year would be about $500 million. This amount is less than half of 1 percent of the state’s current General Fund budget.

Measure Would Have Some Impact on Local Revenue-Raising and Facility Spending. Passage of a new state bond would likely have some effect on local district behavior. This is because school and community college districts typically are required to make local contributions to their facilities if they want to obtain state funding. The exact effect on local behavior is uncertain. On the one hand, some school and community college districts might raise and spend more locally given the availability of additional state funds. As a result, more overall facility activity might occur in these districts over the next several years. In contrast, other school and community college districts might raise and spend less locally as the availability of additional state funds means they would not need to bear the full cost of their facility projects. These districts might complete the same number of projects as they would have absent a new state bond. They would use the newly available state funding to offset what they otherwise would have raised locally.