A YES vote on this measure means: An existing charge imposed on most private hospitals that is scheduled to end on January 1, 2018 under current law would be extended permanently. It would be harder for the Legislature to make changes to it. Revenue raised would be used to create state savings, increase payments for hospital services to low-income Californians, and provide grants to public hospitals.

A NO vote on this measure means: An existing charge imposed on most private hospitals would end on January 1, 2018 unless additional action by the Legislature extended it.

Overview of Medi-Cal and Hospitals 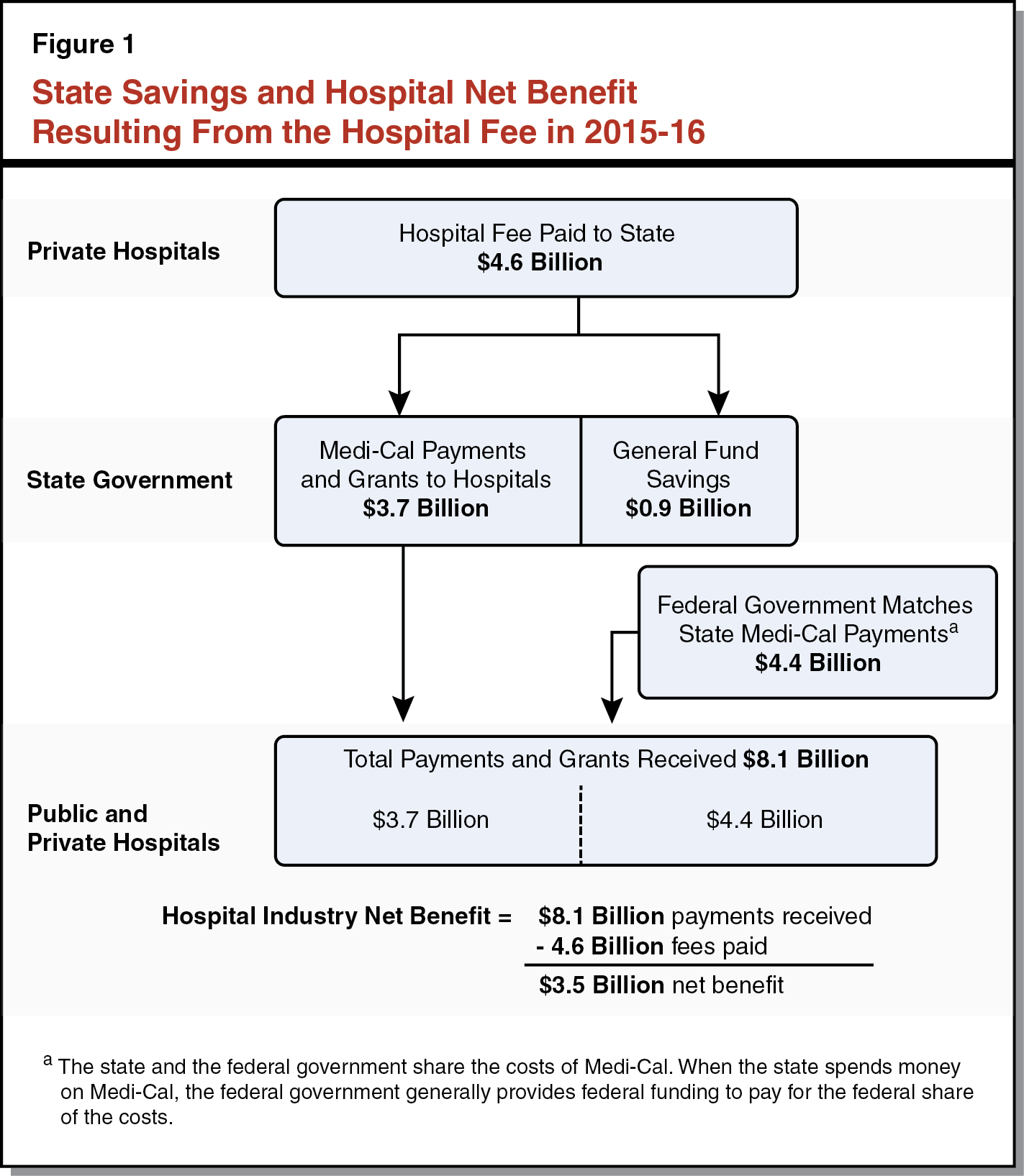 Hospital Fee Results in a Net Benefit to Hospital Industry. As shown in Figure 1, the hospital industry received in 2015-16 a net benefit of $3.5 billion as a result of the fee because the hospitals received $8.1 billion in payments and paid $4.6 billion in fees. Public hospitals in particular received a benefit of $235 million in 2015-16, comprised of grants and increased Medi-Cal payments. (While the hospital industry as a whole received a net benefit, a small number of private hospitals paid more in fee revenue than they received in Medi-Cal payments.)

Legislature Has Extended Hospital Fee Several Times in the Past. Since the fee began in 2009, the Legislature has extended it four times from the date that the fee was to end under law in place at the time. Consistent with this past practice, the Legislature could potentially enact a new law to extend the current hospital fee beyond January 1, 2018 (the date when the current fee ends).

Makes Hospital Fee Permanent. While the hospital fee would otherwise end under current state law on January 1, 2018, Proposition 52 extends the current fee permanently. As with any extension of the hospital fee, the extension under this measure requires federal approval.

Makes It Harder for the State to End Hospital Fee. Under the measure, the state could end the hospital fee if two-thirds of each house of the Legislature votes to do so. Under current law, the fee can be ended with a majority vote in each house.

Makes It Harder to Change the Hospital Fee. Under the measure, changes to the hospital fee generally would require future voter approval in a statewide election. Under current law, changes to the fee can be made by the Legislature. For example, the Legislature can change the formula used to generate state General Fund savings. The measure does allow the Legislature—with a two-thirds vote of each house—to make certain specific changes, such as those necessary to obtain federal approval of the hospital fee.

Excludes Money From Hospital Fee in Annual Calculation of School Funding. The State Constitution requires certain formulas to be used to calculate an annual minimum funding level for K-12 education and California Community Colleges. These formulas take into account the amount of state General Fund revenue. As under current practice, the measure excludes money raised by the hospital fee in these calculations. The measure provides for this exclusion in an amendment to the State Constitution.