A YES vote on this measure means: State revenue bonds totaling more than $2 billion for a project that is funded, owned, or managed by the state would require statewide voter approval.

A NO vote on this measure means: State revenue bonds could continue to be used without voter approval.

Fiscal Impact: State and local fiscal effects are unknown and would depend on which projects are affected by the measure and what actions government agencies and voters take in response to the measure’s voting requirement.

State Borrows Money Using Bonds. The main way the state borrows money is by selling bonds to investors. Over time, the state pays back these investors with interest. The state sells two main types of bonds: general obligation bonds and revenue bonds. The state repays general obligation bonds using the state General Fund, which is funded primarily by income and sales taxes. In contrast, the state usually repays revenue bonds using revenue from fees or other charges paid by the users of the project (such as from bridge tolls). Figure 1 shows how a state revenue bond generally works. (For more information on the state’s use of bonds, see the “Overview of State Bond Debt” later in this voter guide.) 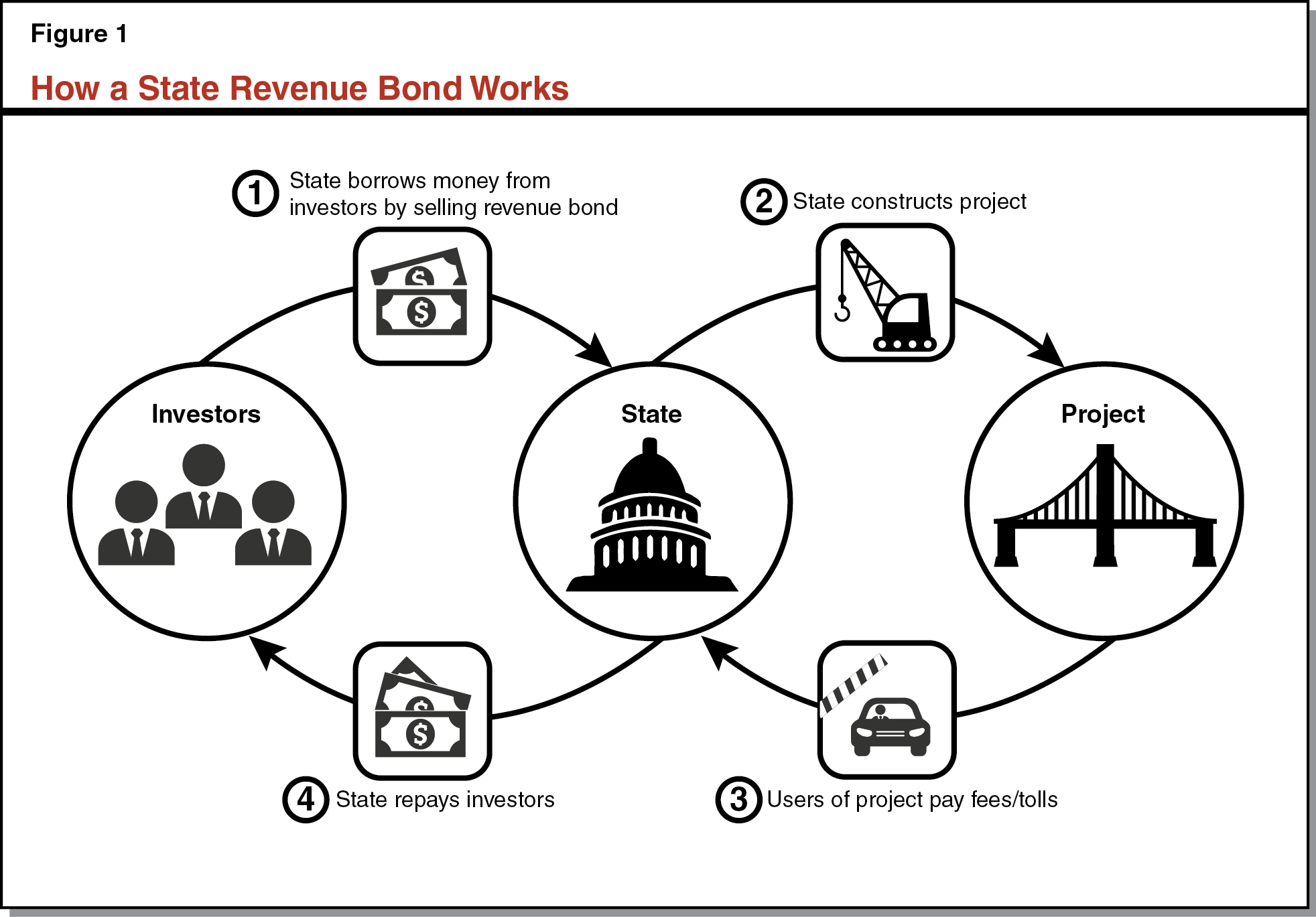 Voter Approval Not Required for State Revenue Bonds. Under the California Constitution, state general obligation bonds need voter approval before the state can use them to pay for a project. State revenue bonds do not need voter approval under existing state law.

The measure’s fiscal effects on state and local governments are unknown. It is unlikely there would be very many projects large enough to be affected by the measure’s requirement for voter approval. However, for those projects that are affected, the fiscal effects would depend on what actions the state, local governments, and voters take in response to this measure’s voting requirement.

Few Projects Cost Over $2 Billion. Relatively few state projects are likely to be large enough to meet the measure’s $2 billion requirement for voter approval. Two state projects that are over $2 billion and might use revenue bonds are (1) the California “WaterFix” project, which would build two tunnels to move water through the Sacramento-San Joaquin River Delta; and (2) the California High-Speed Rail project. It is possible other large projects could be affected in the future, such as new bridges, dams, or highway toll roads.

Uncertain Which Projects Would Be Affected. While it is unlikely that very many projects would be large enough to be affected by the measure, there is some uncertainty regarding which projects would be affected. This is because the measure does not define a “project.” As a result, the courts and the state would have to make decisions about what they consider to be a single project. For example, in some cases a project could be narrowly defined as a single building (like a hospital). In other cases, a project could be more broadly defined as including multiple buildings in a larger complex (like a medical center). A broader definition could result in more projects meeting the $2 billion requirement, thus requiring voter approval.

How Government Agencies and Voters Respond Would Affect Costs

Government and Voters Could Take Different Actions. When a proposed project meets this measure’s requirements for voter approval, governments and voters could respond in different ways. These responses, in turn, would determine the fiscal effects, if any, of this measure:

Some Actions Could Result in Higher Costs. Some types of government and voter response to this measure could result in higher costs for the state and local governments. For example, it could be more expensive in some cases for state and local governments to complete several smaller projects than it would have been for the state to build the original large project. This could happen if the large project was a more efficient way to meet the concerns that the project addressed.

Some Actions Could Result in Lower Costs. Other types of responses could result in lower state and local costs. For example, state and local governments might find ways to make better use of existing infrastructure. For instance, local water agencies might implement water conservation measures, which could reduce the need to build new dams or other projects to provide more water. If existing infrastructure could meet the state’s needs adequately with these types of actions, there would be savings from not having to spend the money to build a new project.