A YES vote on this measure means: Income tax increases on high-income taxpayers, which are scheduled to end after 2018, would instead be extended through 2030.

A NO vote on this measure means: Income tax increases on high-income taxpayers would expire as scheduled at the end of 2018.

Over Half of State Budget Spent on Education. The state collects taxes and fees from people and businesses and uses these revenues to fund programs in the state budget. This year, the state plans to spend about $122 billion from its main operating account, the General Fund. As shown in Figure 1, over half of this spending is for K-12 schools, community colleges, and the state’s public universities. About another one-quarter of this spending is for health and human services programs, the largest of which is the state’s Medi-Cal program. Most of the spending shown in the figure for “various other programs” pays for prisons, parole programs, and the courts. 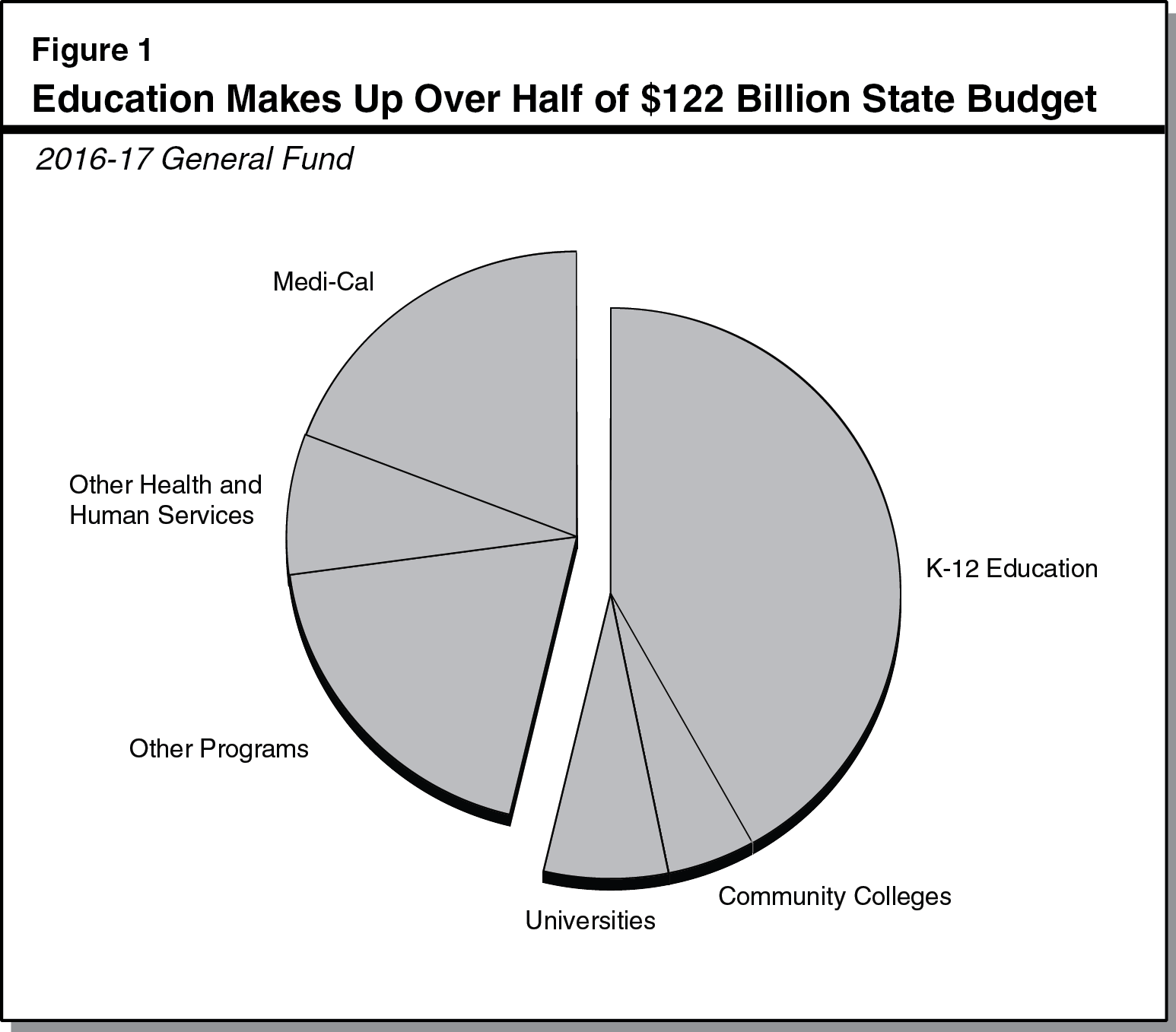 Personal Income Tax Provides Most General Fund Monies. The state’s General Fund is supported primarily by three taxes: the personal income tax, the sales tax, and the corporate income tax. (We refer to the personal income tax simply as “income tax” in this analysis.) The income tax is the most important for the state budget, as it provides about two-thirds of all General Fund revenues. The tax applies to most forms of income—such as salaries, wages, interest income, and profits from the sales of stocks and other assets. It consists of several “marginal” tax rates, which are higher as income subject to the tax, or “taxable income,” increases. For example, in 2011 the tax on a married couple’s taxable income was 1 percent on the first $14,632 but 9.3 percent on all taxable income over $96,058. 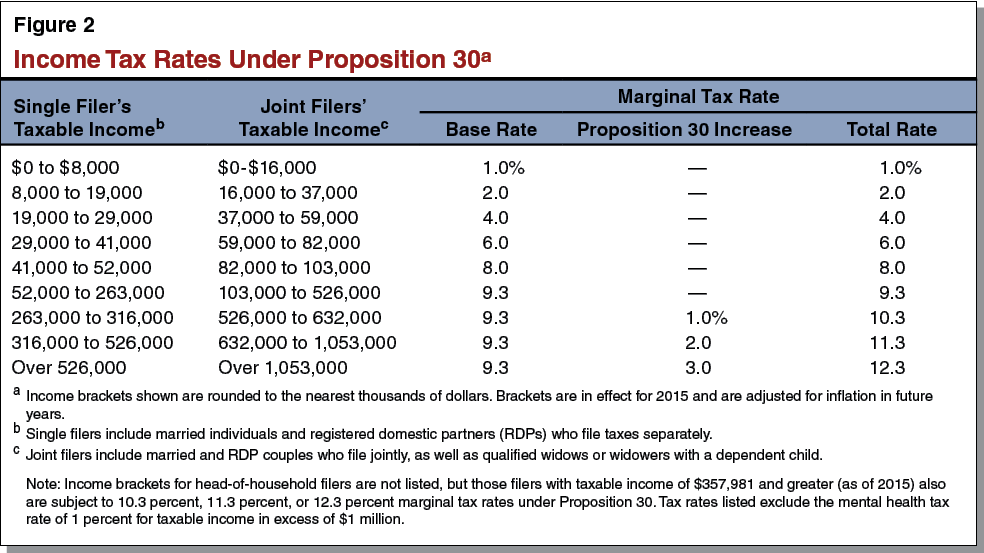 Annual Required Spending on Education. The State Constitution requires the state to spend a minimum amount on K-12 schools and community colleges each year. This “minimum guarantee” grows over time based on growth in state tax revenues, the economy, and student attendance. This year, the state General Fund will provide over $50 billion towards the minimum guarantee. Local property taxes also contribute to the minimum guarantee.

Serves Low-Income People in California. The Medi-Cal program provides health care services to low-income people. These services include primary care visits, emergency room visits, surgery, and prescription drugs. The program serves over 13 million people in California—roughly one-third of the population. This year, the state will spend about $23 billion from the General Fund on Medi-Cal. In addition, the program relies heavily on federal funding and receives some support from other state sources.

“Rainy-Day” Reserves. Governments use budget reserves to save money when the economy is good. When the economy gets worse and revenues decline, governments use money that they saved to reduce the amount of spending cuts, tax increases, and other actions needed to balance their budgets.

Constitution Requires Minimum Amount Used for Debt Payments and Budget Reserves. The Constitution requires the state to save a minimum amount each year in its rainy-day fund and spend a minimum amount each year to pay down state debts faster. The annual amounts used for debts and budget reserves depend primarily upon state tax revenues. In particular, revenues from capital gains—money people make when they sell stocks and other types of property—are an important factor in estimating how much the state must use for these purposes.

This measure (1) extends for 12 years the additional income tax rates established by Proposition 30 and (2) creates a formula to provide additional funds to the Medi-Cal program from the 2018-19 state fiscal year through 2030-31.

Income Taxes Increased on High-Income Taxpayers. Proposition 55 extends from 2019 through 2030 the Proposition 30 income tax rate increases shown earlier in Figure 2. These increases affect high-income taxpayers in the state. Specifically, the measure affects the roughly 1.5 percent of taxpayers with the highest incomes.

Does Not Extend Sales Tax Increase. Proposition 55 does not extend the one-quarter cent increase in the sales tax rate that voters approved in Proposition 30. In other words, whether or not voters pass this measure, Proposition 30’s sales tax increase will expire at the end of 2016.

Creates Formula for Medi-Cal. Proposition 55 includes a new state budget formula to provide more funding for the Medi-Cal program. The measure requires the Director of Finance, the Governor’s main budget advisor, to determine each year from 2018-19 through 2030-31 whether General Fund revenues exceed (1) constitutionally required education spending and (2) the costs of government programs that were in place as of January 1, 2016. If revenues exceed these spending amounts, 50 percent of the excess (up to a maximum of $2 billion) would be allocated to Medi-Cal. (This additional allocation could be reduced somewhat in difficult budget years.) The measure states that these Medi-Cal monies should not replace existing General Fund support for the program.

Figure 3 summarizes Proposition 55’s fiscal effects. The measure’s increased revenues would be used for K-12 schools and community colleges, health care services for low-income people, budget reserves, and debt payments. After satisfying these constitutional requirements, remaining amounts, if any, would be available for any state budget purpose. 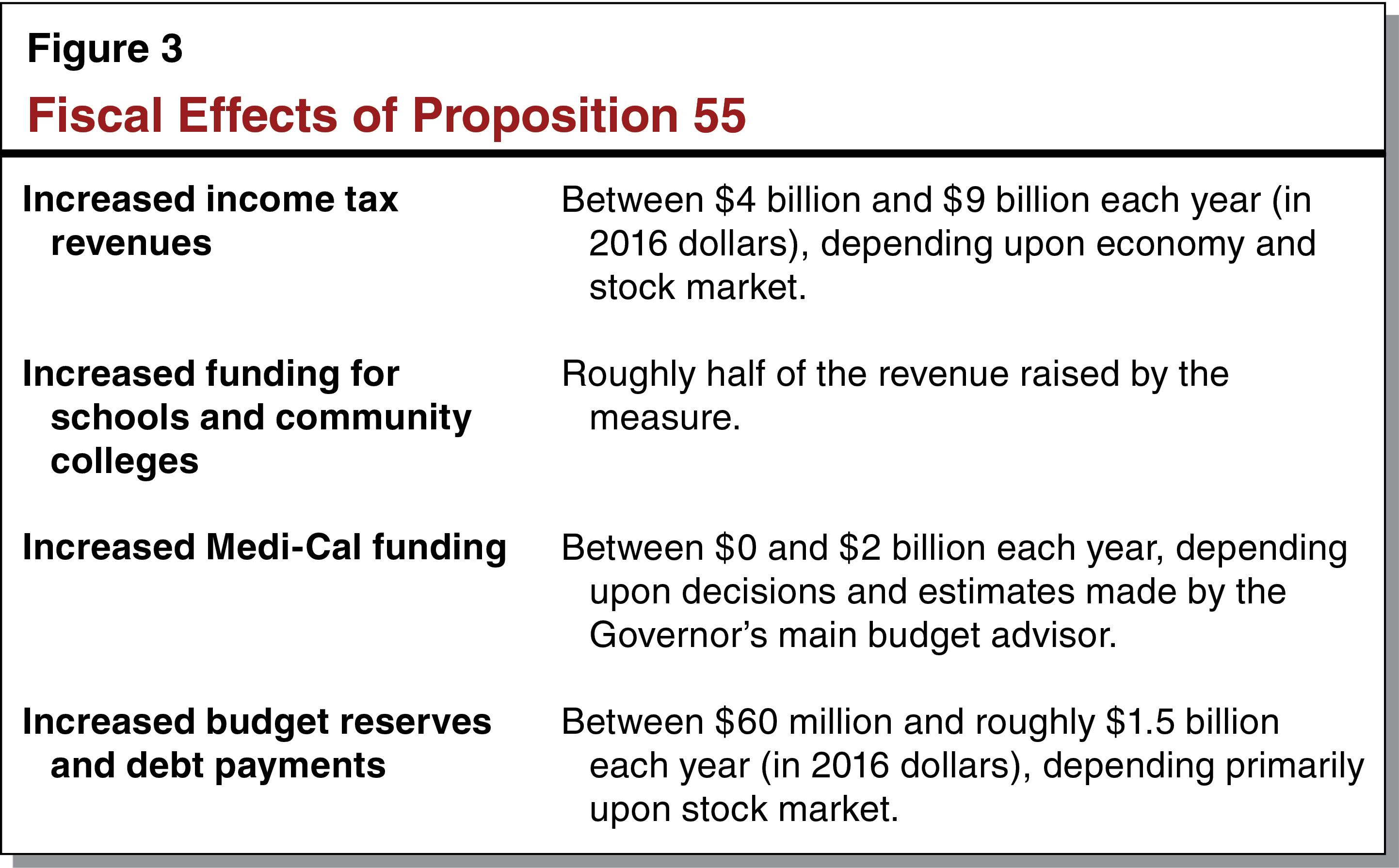 Revenue Raised by Measure Would Depend on Economy and Stock Market. The exact amount of state revenue raised by Proposition 55 would depend on several factors that are difficult to predict. A large share of high-income taxpayers’ earnings comes from capital gains. These revenues depend heavily on future stock market and other asset values, which are difficult to predict. In addition, high-income taxpayers’ earnings fluctuate with the economy. Thus, in a bad economic and stock market year, the measure might raise around $4 billion in revenue. When the economy and stock market are good, the measure might raise around $9 billion in annual revenue. In most years, the amount of revenue raised by the measure would be in between these amounts. (These amounts are in today’s dollars and would tend to grow over time.)

Increases in Education Spending. Higher state tax revenues generally result in increased education spending. The exact amount that the state must spend on schools and community colleges in the future depends on several factors that are difficult to predict. It is reasonable to assume, however, that roughly half of the revenue raised by Proposition 55 would go to schools and community colleges.