A NO vote on this measure means: No changes would be made to existing state taxes on cigarettes, other tobacco products, and electronic cigarettes.

Fiscal Impact: Additional net state revenue of $1 billion to $1.4 billion in 2017-18, with potentially lower revenues in future years. Revenues would be used primarily to augment spending on health care for low-income Californians. 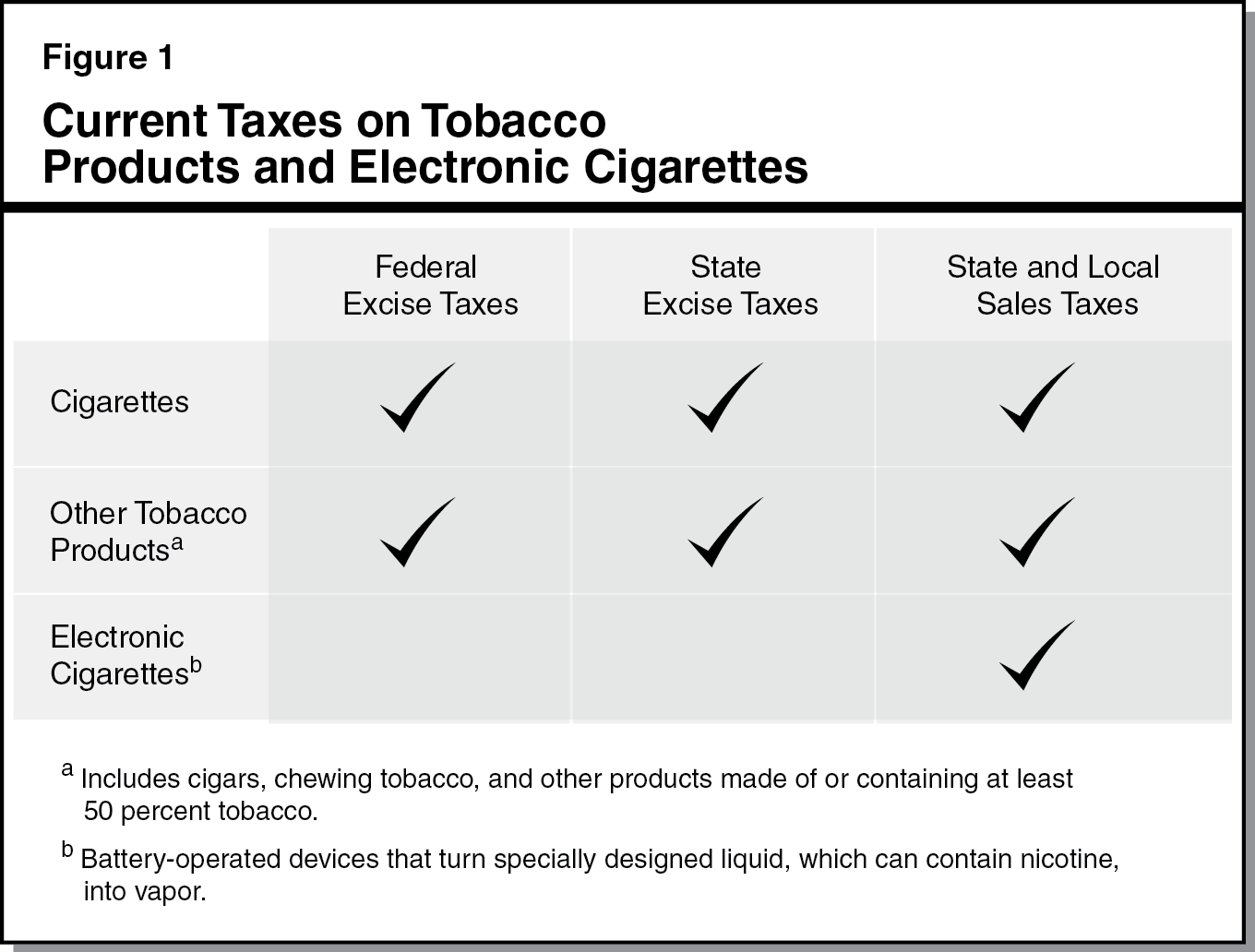 Existing State Excise Taxes on Cigarettes. The current state excise tax is 87 cents for a pack of cigarettes. Figure 2 shows how the tax has increased over time and how these revenues are allocated for different purposes. Existing excise taxes are estimated to raise over $800 million in 2015-16. 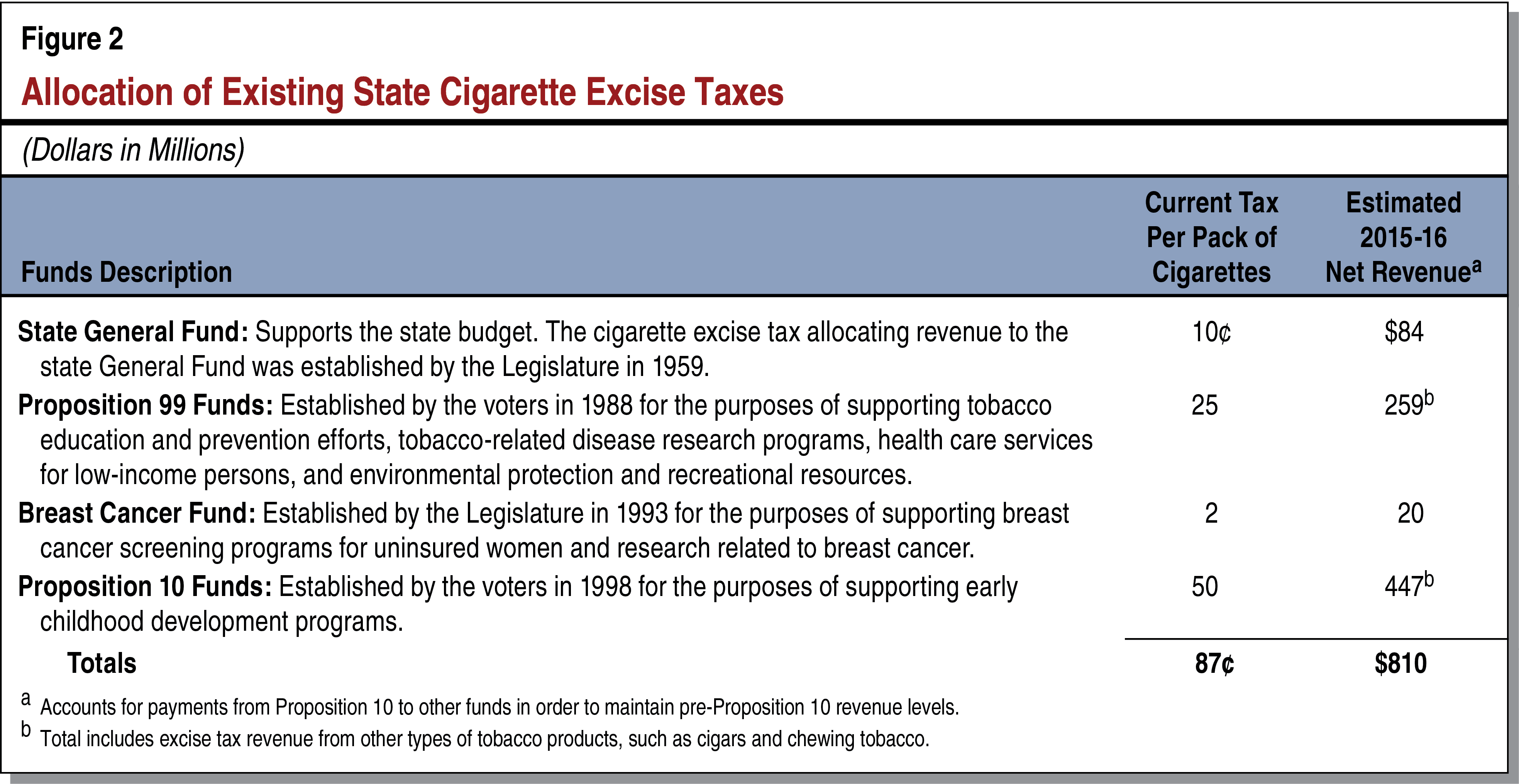 Existing Sales Taxes on Tobacco Products and E-Cigarettes. Sales taxes apply to the sale of cigarettes, other tobacco products, and e-cigarettes. Sales taxes are based on the retail price of goods, which includes the impact of excise taxes. The average retail price for a pack of cigarettes in California is close to $6. Currently, the sales tax ranges from 7.5 percent to 10 percent of the retail price (depending on the city or county), with a statewide average of around 8 percent. Thus, sales tax adds roughly 50 cents to 60 cents to the total cost for a pack of cigarettes. The sales taxes on cigarettes, other tobacco products, and e-cigarettes raises about $400 million annually, with the proceeds going both to the state and local governments.

Adult Smoking Trends and E-Cigarette Use in California

The DPH reports that e-cigarette use among California adults was about 4 percent in 2013, nearly doubling compared to the prior year. Because e-cigarettes are relatively new products, however, there is little information to determine longer-term use of e-cigarettes.

Medi-Cal. The Department of Health Care Services administers California’s Medi-Cal program, which provides health care coverage to over 13 million low-income individuals, or nearly one-third of Californians. With a total estimated budget of nearly $95 billion (about $23 billion General Fund) for 2015-16, Medi-Cal pays for health care services such as hospital inpatient and outpatient care, skilled nursing care, prescription drugs, dental care, and doctor visits. Some of the services provided in the Medi-Cal program are for prevention and treatment of tobacco-related diseases.

Public Health Programs. The DPH administers and oversees a wide variety of programs with the goal of optimizing the health and well-being of Californians. The department’s programs address a broad range of health issues, including tobacco-related diseases, maternal and child health, cancer and other chronic diseases, infectious disease control, and inspection of health facilities. Many public health programs and services are delivered at the local level, while the state provides funding, oversight, and overall strategic leadership for improving population health. For example, the DPH administers the California Tobacco Control Program—a Proposition 99 program—that funds activities to reduce illness and death from tobacco-related diseases with a budget of about $45 million in 2015-16.

The Legislature recently passed, and the Governor signed in May 2016, new tobacco-related legislation that made significant changes to state law. Figure 3 describes these changes. Also in May 2016, the U.S. Food and Drug Administration (FDA) issued new rules that extend the FDA’s regulatory authority to include e-cigarettes, cigars, and other tobacco products. These recent changes do not directly affect the state taxes on these products or the programs that receive funding from these taxes. 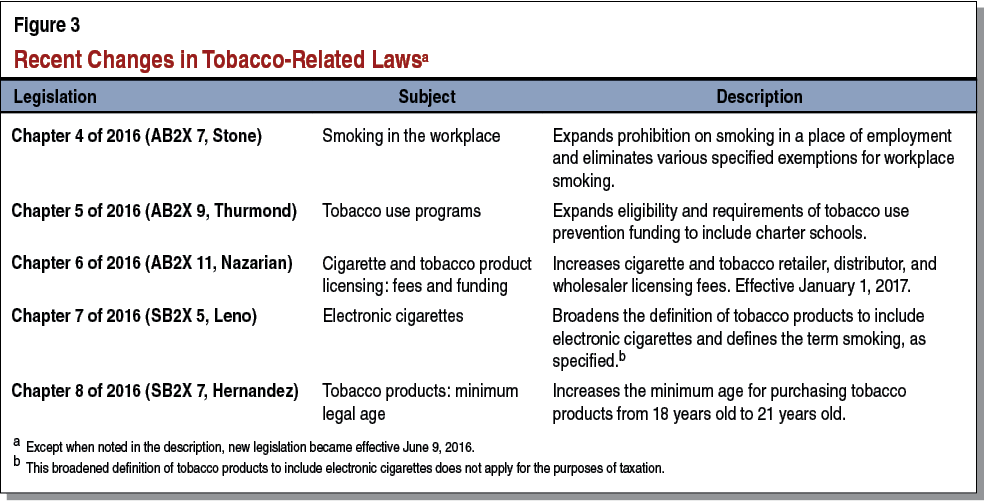 This measure significantly increases the state’s excise tax on cigarettes and other tobacco products and applies this tax to e-cigarettes. The additional revenues would be used for various specified purposes. The major provisions of the measure are described below.

How Would Revenues From New Tobacco and E-Cigarette Taxes Be Spent?

Revenues from the cigarette, other tobacco product, and e-cigarette excise taxes that are increased by this measure would be deposited directly into a new special fund. Revenues deposited in this fund would only be used for purposes set forth in the measure, as described below. (Revenues from applying the $1.37 per pack rate on e-cigarettes, however, would support Proposition 99 and Proposition 10 purposes. This would be new revenue to these funds.)

As shown in Figure 4, the revenues would be allocated as follows: 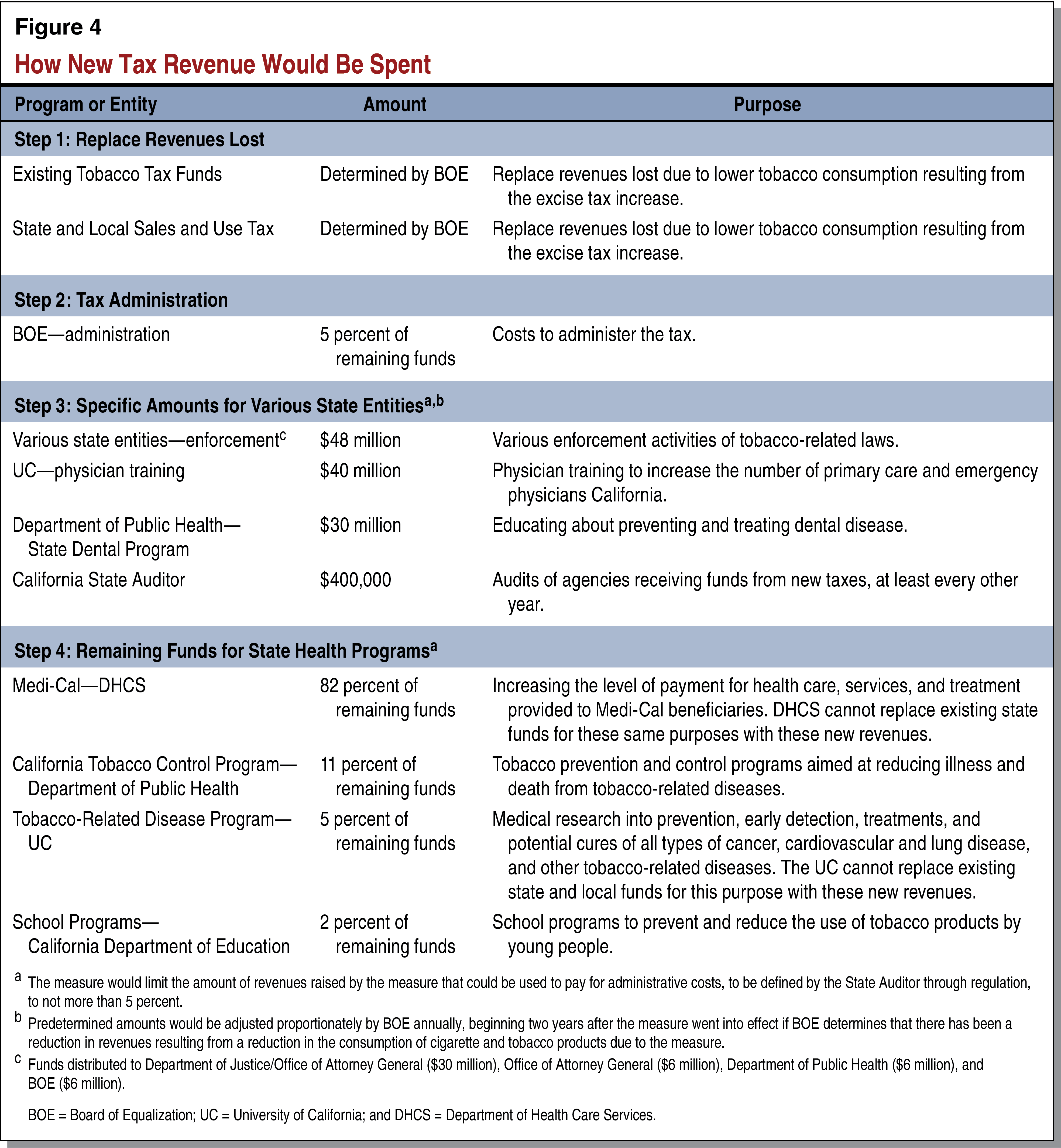 Required Audits. The California State Auditor would conduct audits of agencies receiving funds from the new taxes at least every other year. The Auditor, who provides independent assessments of the California government’s financial and operational activities, would receive up to $400,000 annually to cover costs incurred from conducting these audits.

Revenues Exempt From State Spending Limit and Minimum Education Funding Level. Proposition 56 amends the State Constitution to exempt the measure's revenues and spending from the state's constitutional spending limit. (This constitutional exemption is similar to ones already in place for prior, voter-approved increases in tobacco taxes.) This measure also exempts revenues from minimum funding requirements for education required under Proposition 98.

This measure would have a number of fiscal effects on state and local governments. The major impacts of this measure are discussed below.

Impacts on State and Local Revenues

New Excise Taxes Would Increase State Revenue by Over $1 Billion in 2017-18. This measure would raise between $1.3 billion and $1.6 billion in additional state revenue in 2017-18—the first full year of the measure’s implementation. The excise tax increase would result in higher prices for consumers. As a result, consumers would reduce their consumption of cigarettes and other tobacco products, including e-cigarettes. (Many consumers might also change the way they buy these products to avoid the tax.) The range in potential new revenue reflects uncertainty about how much consumers will reduce their purchases in response to higher prices. The low-range estimate ($1.3 billion) assumes consumers have a stronger response to the tax than under the high-range estimate ($1.6 billion). In future years, revenues may decline relative to 2017-18 due to changes in consumer choices.

Applying Excise Taxes on E-Cigarettes Also Would Generate Additional Revenue for Existing Tobacco Funds. As noted earlier, the measure expands the definition of other tobacco products to include e-cigarettes. This change makes e-cigarettes subject to the taxes passed by voters in Proposition 99 and Proposition 10. As a result, the funds supported by those two propositions would receive additional revenue due to this measure. This additional revenue likely would be in the tens of millions of dollars annually.

Over $1 Billion in Increased Funding in 2017-18, Mostly for State Health Programs. Figure 5 estimates the amount of funding each program and government agency would receive from the new tax revenues in 2017-18. After covering revenue losses resulting from the measure, the revenue available for specific activities funded by the measure—mostly health programs—would be between $1 billion and $1.4 billion. If cigarette use continues to decline, these amounts would be somewhat less in future years. In addition, much of the added spending on health programs would generate additional federal funding to the state. As a result, state and local governments would collect some additional general tax revenue. 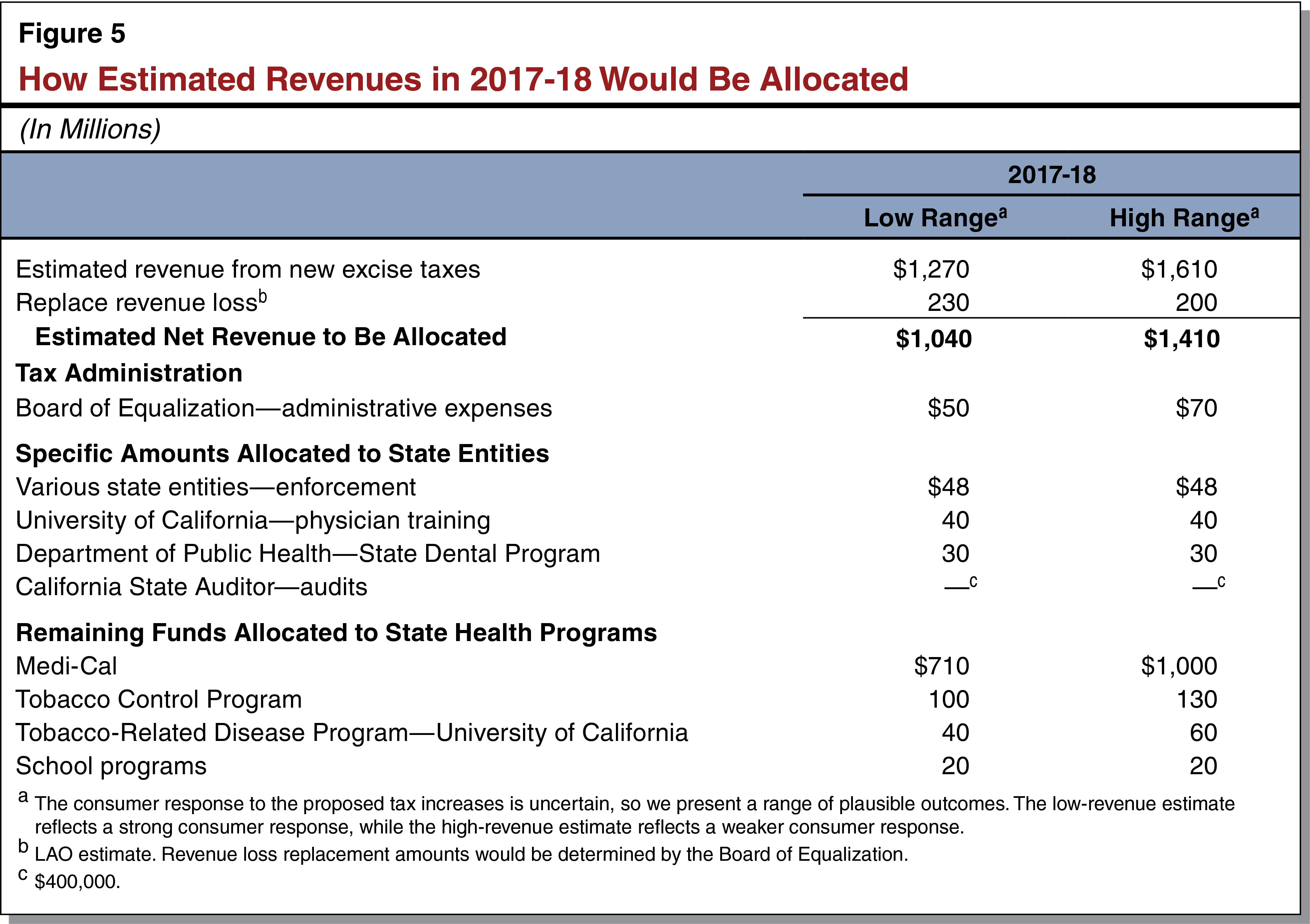 Effects on Excise Tax Collection. As described in Figure 4, the measure would provide additional funding to various state agencies to support state law enforcement. These funds would be used to support increased enforcement efforts to reduce tax evasion, counterfeiting, smuggling, and the unlicensed sales of cigarettes and other tobacco products. Such enforcement efforts would increase the amount of tax revenue. The funds also would be used to support efforts to reduce sales of tobacco products to minors, which would reduce revenue collection. As a result, the net effect on excise tax revenue from these enforcement activities is unclear. In addition, while cigarettes and other tobacco products—as currently defined—are covered by federal laws to prevent tax evasion, e-cigarettes are not covered. As a result, enforcement of state excise taxes on e-cigarettes may be more challenging if consumers purchase more of these products online to avoid the new taxes.

The state and local governments in California incur costs for providing (1) health care for low-income and uninsured persons and (2) health insurance coverage for state and local government employees and retirees. Consequently, changes in state law such as those made by this measure that affect the health of the general population would also affect publicly funded health care costs.

This measure would have other fiscal effects that offset these cost savings. For example, state and local governments would experience future health care and social services costs that otherwise would not have occurred as a result of individuals who avoid tobacco-related diseases living longer. Further, the impact of a tax on e-cigarettes on health and the associated costs over the long term is unknown, because e-cigarettes are relatively new devices and the health impacts of e-cigarettes are still being studied. Thus, the net long-term fiscal impact of this measure on state and local government costs is unknown.