A YES vote on this measure means: There would be additional workplace health and safety requirements placed on adult film productions in California and additional ways to enforce those requirements.

A NO vote on this measure means: Adult film productions in California would continue to be subject to current state and local workplace health and safety requirements, including the rules now interpreted to require condom use in adult film productions.

California Is Leading Adult Film Industry Location. Many adult films are made in the San Fernando Valley of Los Angeles (a long-time center of adult film production) and elsewhere in California. (Adult films are also commonly called “pornography.”) A number of media companies produce adult films here, which consumers mostly view over the Internet. Some adult film performers also own businesses that produce, finance, or distribute content. These businesses include websites and social media platforms where the performers promote their own videos and photos.

State Laws Protect Worker Safety and Health. State law imposes a variety of requirements on employers to protect their employees from harm in the workplace. The state Division of Occupational Safety and Health (Cal/OSHA) enforces regulations to protect workers from workplace hazards. A state board, appointed by the Governor, is responsible for adopting and updating these workplace health and safety regulations. Performers and other workers on adult film sets, such as directors and camera operators, may be exposed to a variety of health and safety hazards while working there. These range from typical workplace health and safety issues (like inadequate first aid kits in the workplace) to other risks specific to adult film sets—such as contact with potentially infectious body fluids, especially semen, while making or performing in a film.

Cal/OSHA Already Requires Adult Film Condom Use. Cal/OSHA considers exposure to certain body fluids a workplace hazard. This is because harmful sexually transmitted infections (STIs)—like chlamydia, hepatitis B and the human immunodeficiency virus (HIV)—spread from infected people to healthy people through contact with blood and certain other body fluids. For this reason, current state regulations generally require employers to provide and ensure that their employees use protective equipment to prevent contact with certain body fluids in the workplace. In enforcing these regulations, Cal/OSHA is requiring performers to use condoms during sex on adult film sets. Cal/OSHA generally enforces these rules by responding to complaints. Over the two-year period of 2014 and 2015, Cal/OSHA cited four production companies for violations of these regulations.

Industry Practice Varies. Some adult film productions currently require or allow performers to wear condoms. However, despite state and local regulations, other producers and performers prefer to make adult films without condoms or other protective equipment. Parts of the industry instead use regular STI testing that aims to confirm that performers are free of harmful infections. 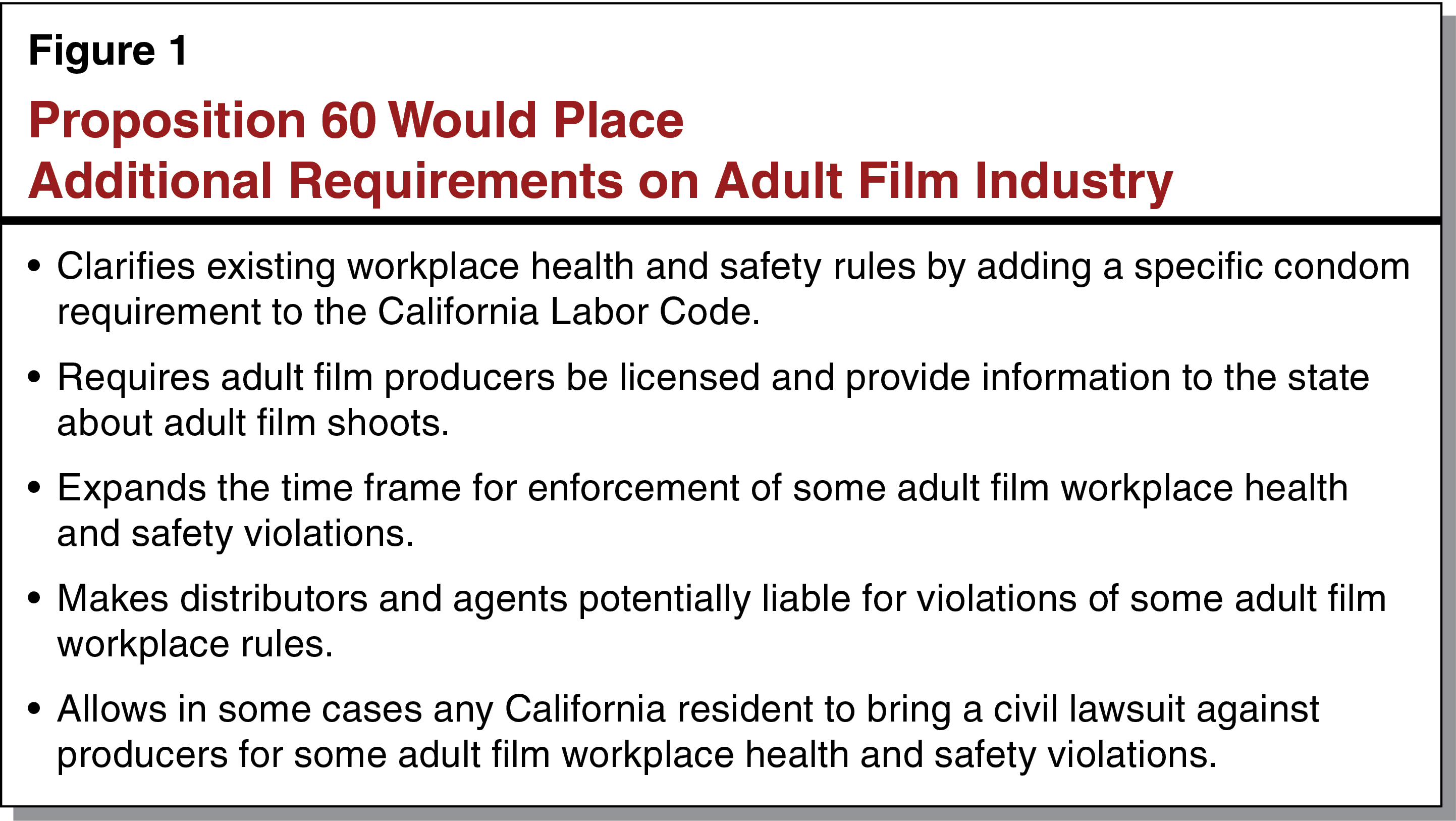 Clarifies State Labor Code to Specifically Require Condoms. This measure clarifies how some key provisions of existing workplace health and safety rules apply specifically to the adult film industry. It puts into the Labor Code a specific requirement that adult film producers provide condoms and ensure that performers use them (as opposed to the existing, general workplace health and safety regulations about preventing contact with blood and certain other body fluids). This measure states that the condoms do not have to be visible in films distributed to consumers. However, adult film producers would need to be able to prove that performers actually used condoms.

Expanded Time Frame for Enforcement. Under current law, Cal/OSHA generally has six months from the time of a workplace violation to complete its investigation and issue a citation. The proposition allows enforcement actions for these adult film violations to be started within one year after the violation is or should have been discovered.

Expands Liability for Certain Workplace Health and Safety Violations. In addition to adult film producers, the measure makes adult film distributors and talent agents potentially liable for workplace health and safety violations placed into law by this measure. The measure also sets financial penalties for violations of these requirements.

Allows Individuals to Bring Lawsuits on Regulatory Violations. Under the measure, any California resident could request Cal/OSHA to address some alleged adult film workplace health and safety violations. If Cal/OSHA does not take certain actions within specific time frames, that person could file a civil action against the adult film producer. If the individual prevails, he or she would be able to recover their legal costs and receive 25 percent of any penalties paid by a defendant in such a lawsuit, with the rest being paid to the state. The measure provides that its penalties will not apply to adult film performers or employees, so long as those individuals have no financial interest in a film and are not producers of the film.

Likely Reductions in Tax Revenue. Industry participants would respond to this measure’s increased regulatory and enforcement requirements in many ways. Some parts of the adult film industry would comply with the measure while others might choose to relocate outside of California. It is also possible that some adult film producers would try to evade state and local law enforcement while continuing to make adult films here. Adult film wages and business income in California would likely decline and, as a result, the measure would likely reduce state and local tax revenues by several million dollars per year.

Regulatory and Enforcement Costs and Revenues. The ongoing state government costs to implement this law could exceed $1 million annually. Most of the costs would be covered by new fees on adult film producers. Any penalty revenue would be deposited into the state General Fund.

Other Public Budget Effects. The measure could have other fiscal effects on California governments. For example, a reduction in employment in the adult film industry could result in a minor increase in state or local costs for health or social services programs. The measure could also result in fewer transmissions of STIs, which could somewhat reduce state or local costs for publicly funded health programs. Overall, the net effect on publicly funded health and social services programs probably would be minor.