A YES vote on this measure means: Most grocery stores, convenience stores, large pharmacies, and liquor stores would be prohibited from providing single-use plastic carryout bags. Stores generally would be required to charge at least 10 cents for any other carryout bag provided to customers at checkout. Stores would keep the resulting revenue for specified purposes.

A NO vote on this measure means: Stores could continue to provide single-use plastic carryout bags and other bags free of charge unless a local law restricts the use of such bags.

Many Local Governments Restrict Single-Use Carryout Bags. Many cities and counties in California have adopted local laws in recent years restricting or banning single-use carryout bags. These local laws have been implemented due to concerns about how the use of such bags can impact the environment. For example, plastic bags contribute to litter and can end up in waterways. In addition, plastic bags can be difficult to recycle because they can get tangled in recycling machines. Most of these local laws ban single-use plastic carryout bags at grocery stores, convenience stores, pharmacies, and liquor stores. They also usually require the store to charge at least 10 cents for the sale of any carryout bag. Stores are allowed to keep the resulting revenue. As of June 2016, there were local carryout bag laws in about 150 cities and counties—covering about 40 percent of California’s population—mostly in areas within coastal counties.

Passage of Statewide Carryout Bag Law. In 2014, the Legislature passed and the Governor signed a statewide carryout bag law, Senate Bill (SB) 270. As described in more detail below, the law prohibits certain stores from providing single-use plastic carryout bags. It also requires these stores to charge customers for any other carryout bag provided at checkout.

Under the State Constitution, a new state law can be placed before voters as a referendum to determine whether the law can go into effect. This proposition is a referendum on SB 270. Below, we describe what a “yes” and “no” vote would mean for this measure, its major provisions, and how this measure could be affected by another proposition on this ballot.

“Yes” Vote Upholds SB 270. Certain stores would be prohibited from providing single-use plastic carryout bags and generally required to charge at least 10 cents for other carryout bags. These requirements would apply only to cities and counties that did not already have their own single-use carryout bag laws as of the fall of 2014.

“No” Vote Rejects SB 270. A store could continue to provide single-use plastic carryout bags and other bags free of charge unless it is covered by a local law that restricts the use of such bags.

Creates New Standards for Reusable Plastic Carryout Bags. This measure also creates new standards for the material content and durability of reusable plastic carryout bags. The California Department of Resources Recovery and Recycling (CalRecycle) would be responsible for ensuring that bag manufacturers meet these requirements. The measure also defines standards for other types of carryout bags.

Requires Charge for Other Carryout Bags. This measure generally requires a store to charge at least 10 cents for any carryout bag that it provides to consumers at checkout. This charge would not apply to bags used for certain purposes—such as bags used for prescription medicines. In addition, certain low-income customers would not have to pay this charge. Under the measure, stores would retain the revenue from the sale of the bags. They could use the proceeds to cover the costs of providing carryout bags, complying with the measure, and educational efforts to encourage the use of reusable bags.

Another Proposition on This Ballot Could Affect Implementation of This Measure

This ballot includes another measure—Proposition 65—that could direct revenue from carryout bag sales to the state if approved by voters. Specifically, Proposition 65 requires that revenue collected from a state law to ban certain bags and charge fees for other bags (like SB 270 does) would have to be sent to a new state fund to support various environmental programs.

If both measures pass, the use of the revenues from carryout bag sales would depend on which measure receives more votes. Figure 1 shows how the major provisions of SB 270 would be implemented differently depending on different voter decisions on the two measures. Specifically, if Proposition 67 (this referendum on SB 270) gets more “yes” votes, the revenue would be kept by stores for specified purposes. However, if Proposition 65 (initiative) gets more “yes” votes, the revenue would be used for environmental programs. We note that Proposition 65 includes a provision that could be interpreted by the courts as preventing SB 270 from going into effect at all should both measures pass and Proposition 65 gets more “yes” votes. However, this analysis assumes that the other provisions of SB 270 not related to the use of revenues—such as the requirement to ban single-use plastic carryout bags and charge for other bags—would still be implemented. 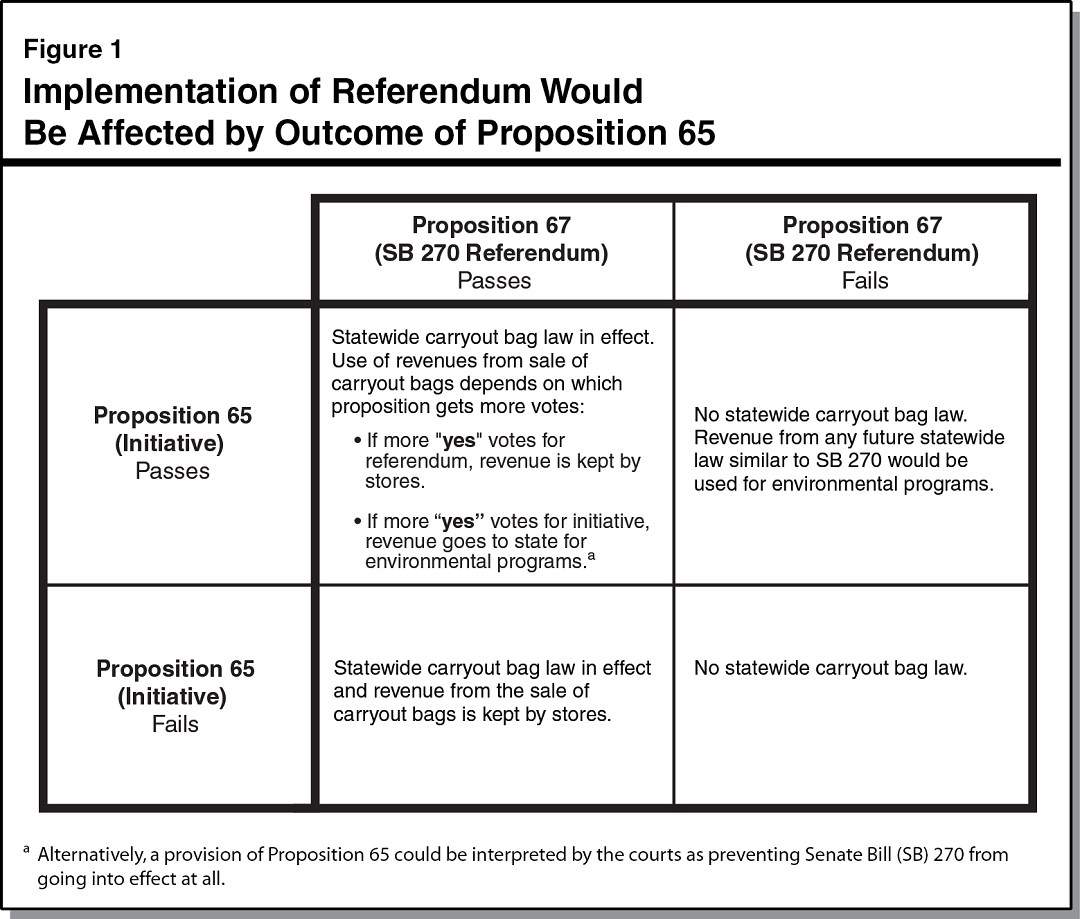 Minor State and Local Fiscal Effects. This measure would have relatively small fiscal effects on state and local governments. Specifically, the measure would result in a minor increase of less than a million dollars annually in state costs for CalRecycle to ensure that bag manufacturers meet the new reusable plastic bags requirements. These costs would be offset by fees charged to makers of these bags. The measure could also result in other fiscal effects—such as minor savings to local governments from reduced litter cleanup and waste management costs.