A YES vote on this measure means: The state could sell $4.1 billion in general obligation bonds to fund various natural resources-related programs such as for habitat conservation, parks, and water-related projects.

A NO vote on this measure means: The state could not sell $4.1 billion in general obligation bonds to fund various natural resources-related programs.

State Spending on Natural Resources Programs. The state operates various programs to protect the environment, conserve natural resources, provide flood protection, improve water quality, and offer recreational opportunities for the public. The state also provides grants and loans to local governments, nonprofits, and other organizations for similar purposes. In recent years, the state has spent about $5 billion annually to support these types of programs. The state primarily relies on a combination of general obligation (GO) bonds, fee revenue, and the state’s General Fund to support these programs. (The General Fund is the state’s main operating account, which pays for education, prisons, health care, and other services.)

State and local natural resources programs support a variety of purposes, including:

Past Bond Funding for Natural Resources Programs. Since 2000, voters have authorized about $27 billion in GO bonds in statewide elections to fund various natural resources projects. Of this amount, approximately $9 billion remained available for new projects as of June 2017. (Most of the bond funds still available are for water-related purposes authorized by Proposition 1, which was approved in 2014.) The state repays GO bonds over time, with interest, using the state’s General Fund. (For more information on how bonds work and how this proposed bond would impact the state’s budget, see “Overview of State Bond Debt” later in this guide.)

Bond Funds Specific Purposes. This proposition provides funding for various state departments and local governments to use for specific natural resources-related purposes, which are summarized in Figure 1. This includes $1.5 billion for a variety of programs generally intended to conserve natural habitats; improve coastal, river, and other ecosystems; and increase the resiliency of the environment to withstand the effects of climate change (such as sea level rise and more frequent droughts and forest fires). The bond also provides $1.3 billion for parks and recreation projects, most of which would be used to build or improve local parks. Lastly, the bond provides $1.3 billion for various water-related projects, including to increase flood protection, recharge and clean up groundwater, and provide safe drinking water. 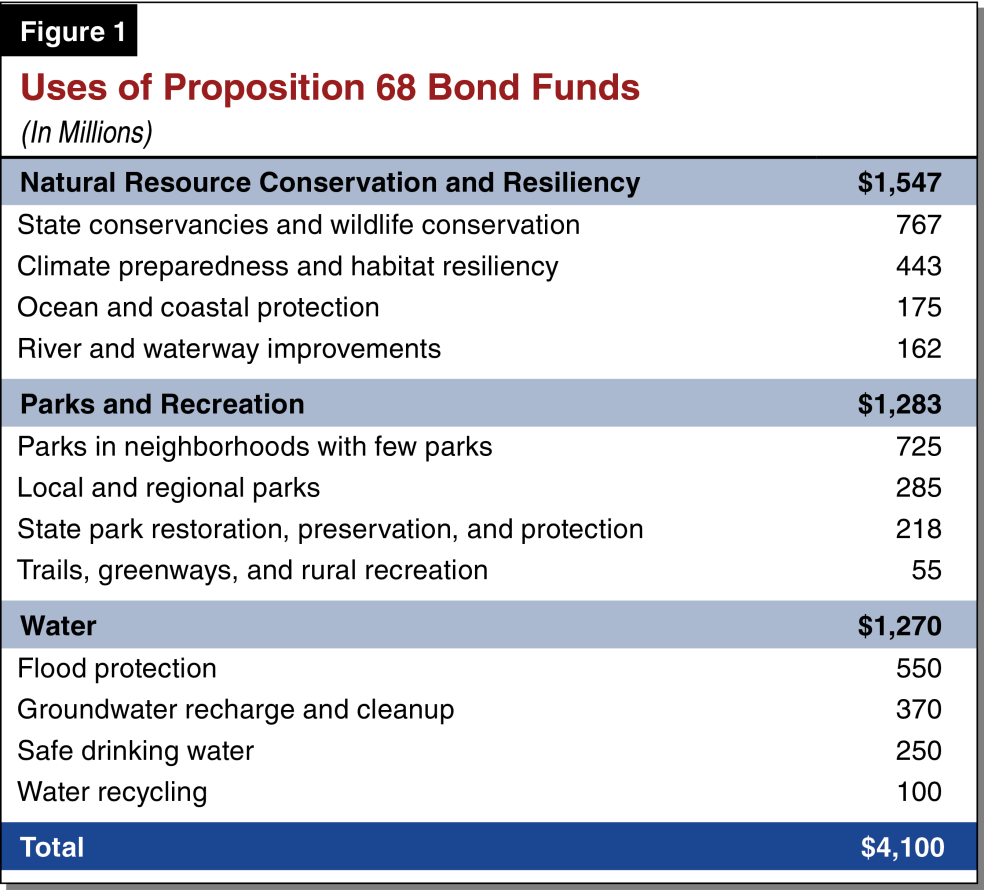 Administrative Provisions. This proposition includes a number of provisions designed to control how the bond funds are administered and overseen by state agencies. The proposition requires regular public reporting of how the bond funds have been spent, as well as authorizes financial audits by state oversight agencies. In addition, for several of the programs funded by this bond, recipients—mostly local governments—would only be eligible to receive the funding if they provide some funding to support the projects. This local cost-share requirement, where it applies, is at least 20 percent of the bond funding awarded. As an example, a city receiving a $100,000 grant to build a new park trail would need to provide at least $20,000 towards the project.

State Bond Costs. This proposition would allow the state to borrow $4 billion by selling additional GO bonds to investors, who would be repaid with interest using the state’s General Fund tax revenues. The cost to the state of repaying these new bonds would depend on various factors—such as the interest rates in effect at the time they are sold, the timing of bond sales, and the time period over which they are repaid. We estimate that the cost to taxpayers to repay this bond would total $7.8 billion to pay off both principal ($4.0 billion) and interest ($3.8 billion). This would result in average repayment costs of about $200 million annually over the next 40 years. This amount is about one-fifth of a percent of the state’s current General Fund budget.

On balance, we estimate that this proposition would result in savings to local governments to complete the projects funded by this bond. These savings could average several tens of millions of dollars annually over the next few decades. The exact amount would vary depending on the specific projects undertaken by local governments, how much local cost sharing is required by state agencies, and the amount of additional funding local governments provide to support the projects.

Other State and Local Fiscal Effects. There could be other state and local fiscal effects under this bond. For example, costs could increase to operate and maintain newly built parks. On the other hand, some projects could reduce future costs, such as by making levee repairs that reduce future flooding damage. The amount of these possible fiscal effects is unknown but could be significant.