A YES vote on this measure means: Beginning on January 1, 2024, revenue collected from the sale of state greenhouse gas emission permits would be deposited into a new special fund. These deposits would continue until the effective date of a bill that spends money from that fund, passed with a two-thirds vote of each house of the Legislature. The current state sales tax exemption for manufacturing and certain other equipment would be suspended during the same period that auction revenue is deposited into the special fund.

A NO vote on this measure means: The Legislature could continue to authorize spending state revenue collected from the sale of greenhouse gas emission permits with a majority vote. The current state sales tax exemption for manufacturing and certain other equipment would remain in effect until July 1, 2030.

Fiscal Impact: Beginning in 2024, potential temporary increase in state sales tax revenue, ranging from none to a few hundred million dollars annually, and possible changes in how revenue from sale of greenhouse gas emission permits is spent.

Program Aimed at Limiting Greenhouse Gases. California has several programs created to reduce the amount of greenhouse gases (GHGs) that are emitted. GHGs—such as carbon dioxide—contribute to global climate change and come from various sources, including gasoline-powered cars and industrial activities. One California program to reduce GHGs is referred to as “cap-and-trade.” Under this program, which began in 2012, the state issues a limited number of permits to emit GHGs. Certain companies responsible for large amounts of GHG emissions must obtain a permit for each ton of GHG they emit. The state gives about half of the permits away to certain industries for free and sells the other half at auctions. A recent state law allows cap-and-trade to operate in California through 2030.

Revenue Collected Used for a Variety of Programs. Revenue collected from cap-and-trade auctions is deposited into a state fund called the Greenhouse Gas Reduction Fund (GGRF). The state determines how to spend money in the GGRF, usually through the annual budget process. The money in the fund is generally used for state and local programs to reduce GHGs. As shown in Figure 1, we estimate the state will spend about $3 billion from the GGRF on various programs in 2017-18. The state can spend money from the GGRF with a bill passed with majority votes in both houses of the Legislature. 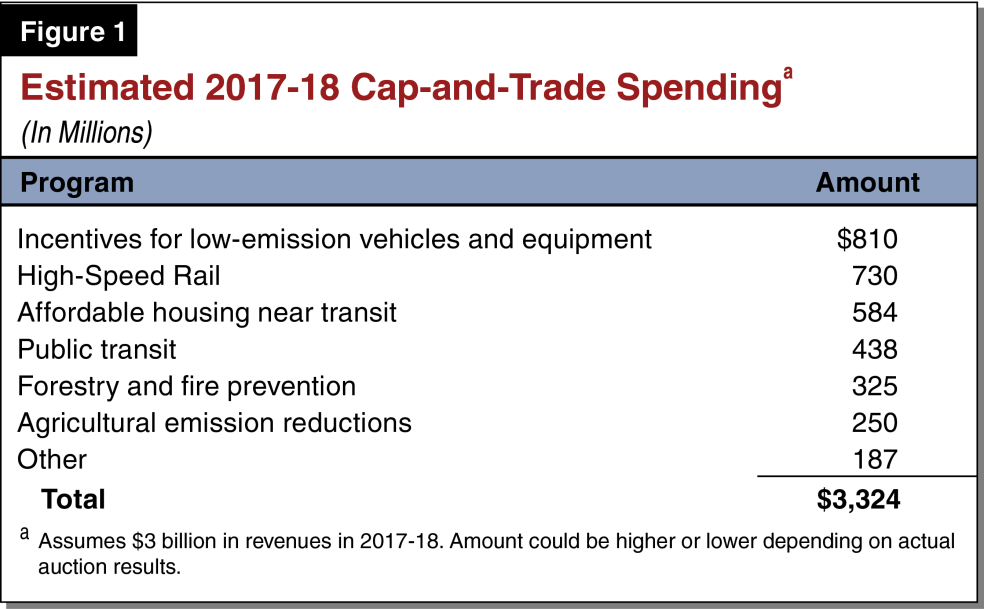 California’s state and local governments charge a sales tax on retail sales of most goods. Revenue from part of the sales tax goes to the state’s main operating account. This part of the tax is not charged when some businesses buy certain equipment used for such things as manufacturing and research and development. We estimate that this “manufacturing exemption” currently reduces state sales tax revenue by about $250 million annually. The exemption is authorized until July 1, 2030.

Creates Temporary Higher Legislative Vote Requirement for Spending Cap-and-Trade Revenue. This measure requires that beginning on January 1, 2024, cap-and-trade revenue be deposited in a new state fund called the Greenhouse Gas Reduction Reserve Fund (Reserve Fund), rather than in the GGRF. These deposits would continue until the effective date of a bill that: (1) spends money from the Reserve Fund and (2) is passed by each house of the Legislature with a two-thirds vote (as opposed to the majority vote currently required). The measure also requires that money in the Reserve Fund be used to fund the same general types of programs that could be funded by the GGRF on January 1, 2024. After the effective date of the bill, future revenue would go back to being deposited in the GGRF and could be spent by a majority vote of the Legislature.

Suspends Manufacturing Exemption Until Cap-and-Trade Revenue Is Spent. This measure suspends the manufacturing exemption beginning on January 1, 2024. While the exemption is suspended, the full sales tax would be charged when businesses buy certain equipment for such things as manufacturing and research and development. The suspension would continue until the effective date of a bill that: (1) spends money from the Reserve Fund and (2) is passed with a two-thirds legislative vote.

Potential Temporary Increase in Sales Tax Revenue Beginning in 2024. The measure could suspend the manufacturing exemption beginning in 2024. The state would generate additional sales tax revenue while the manufacturing exemption is suspended. The amount of additional revenue would depend on when the Legislature approves spending money from the Reserve Fund with a two-thirds vote. If the Legislature approves spending the money by early 2024, there would be little or no additional revenue. However, if there was a lengthy delay, the additional state revenue would be up to a few hundred million dollars annually.

Possible Change in Mix of Programs Funded. Beginning in 2024, the two-thirds vote requirement could, at least temporarily, change the mix of state and local programs funded by auction revenues compared to what would otherwise occur. Any change would depend on the future composition and spending priorities of the Legislature, which are unknown. As a result, it is unclear which state and local government programs might receive more or less money.