Tweet
On November 18th, we released the 21st annual edition of our Fiscal Outlook, which projects California’s state budget condition through 2019-20 under a few different economic scenarios. This note provides the calculations and assumptions underlying the report’s estimates on Proposition 2 (2014), which changed the state’s budgeting practices concerning reserves and debt payments. Specifically, this note provides a high-level overview of our estimates of Proposition 2’s debt and reserve requirements in 2015-16 and 2016-17.

On November 18th, we released the 21st annual edition of our Fiscal Outlook, which projects California’s state budget condition through 2019-20 under a few different economic scenarios. This note details our Proposition 2 calculations and assumptions in the report and provides a high-level overview of the 2015-16 and 2016-17 Proposition 2 requirements.

As shown in Figure 1, Proposition 2 has two avenues for making reserve deposits and paying debt. First, it requires the state to put aside 1.5 percent of General Fund revenues (we refer to this as the “base amount”). Second, it requires the state to put aside a portion of capital gains revenues that exceed a specified threshold. The state combines these two amounts and then allocates half of the total to pay down debts and the other half to build the rainy-day reserve. 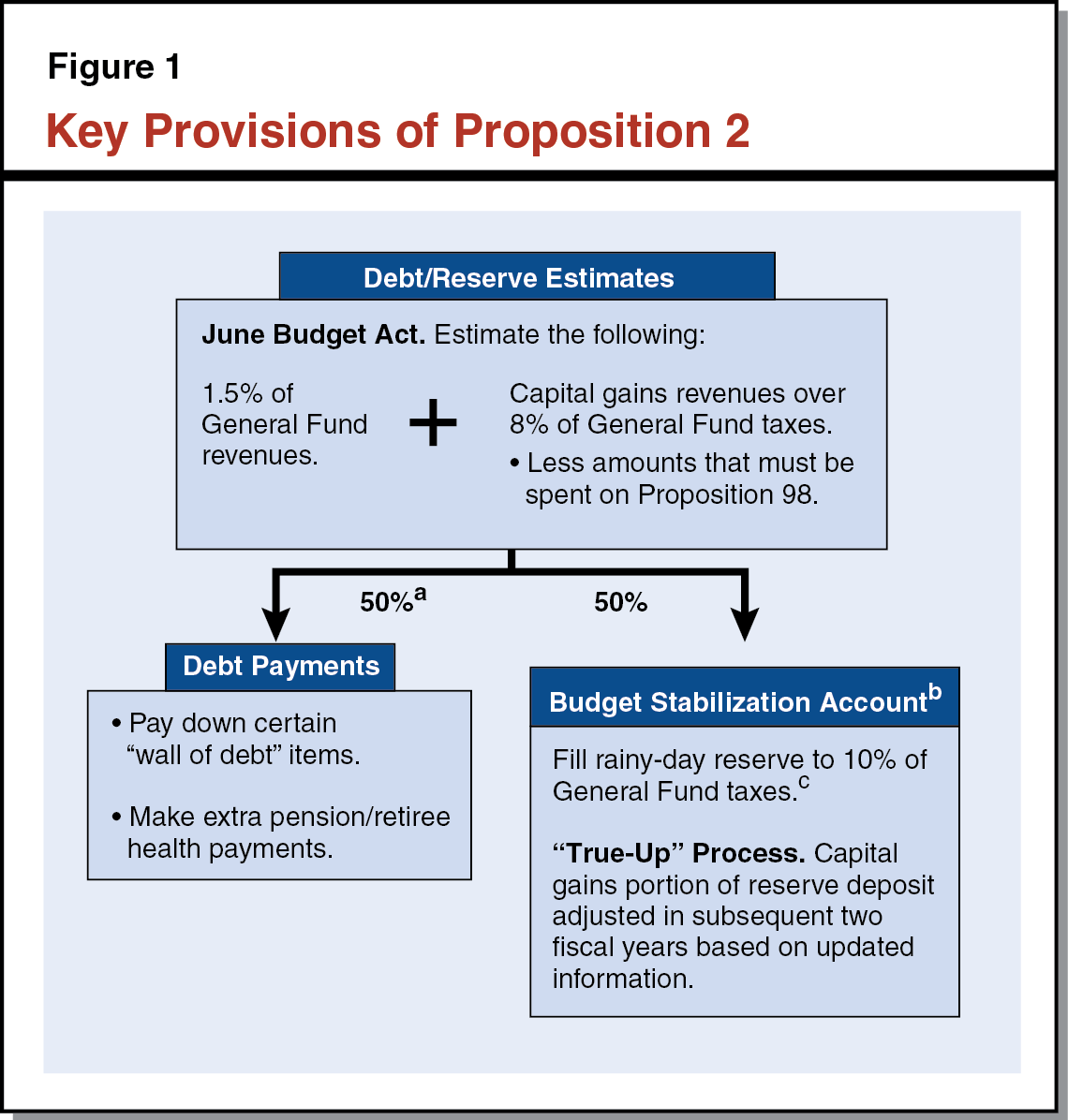 Under Proposition 2’s “true up” provisions, the state will reevaluate the BSA estimate twice: once in each two subsequent budgets. Under these reevaluations, the state revises the BSA deposit up or down if capital gains taxes were higher or lower than the state’s prior estimates. The state does not revisit its estimate of the base amount in the true up calculation. Debt payments are also not adjusted when new capital gains estimates are available later, which means that all of the revised estimate contributes to reserves rather than debt payments.

Estimated $5.9 Billion Proposition 2 Requirement in 2015-16. Our current estimate of the 2015-16 Proposition 2 requirement includes debt payments and an initial deposit made in the June 2015 budget plan, and a true up deposit that will be made in the 2016-17 budget. In our Fiscal Outlook, we estimate this total requirement will be $5.9 billion under our “main scenario,” which assumes continued economic growth. This requirement includes debt payments of $1.9 billion, an initial deposit of $1.9 billion, and a true up deposit of $2.2 billion.

An Alternative Reading of Proposition 2 Requirements. In the Fiscal Outlook, we noted that our reading of Proposition 2’s requirements is based on our understanding of legislative intent. Under a literal reading of the measure, the true up would be lower by an amount equal to half of the base amount (roughly $900 million). Had we applied this alternative reading, Proposition 2 BSA deposits would have been about $900 million smaller each year beginning in 2015-16. We chose not to reflect this literal reading because systematically reducing the BSA deposit did not seem to be the intent of the Legislature or voters at the time of enactment.

Proposition 2 Requirements Beyond 2016-17. In the Fiscal Outlook, under our main scenario assumptions, we estimate that Proposition 2 requirements beginning in 2017-18 will be lower than our estimates in 2016-17. These out-year estimates range from around $2 to $3 billion per year from 2017-18 to 2019-20. These lower estimates largely reflect our assumption that the stock market will grow more slowly than it has in recent years. However, estimating future Proposition 2 requirements, which depend heavily on volatile capital gains revenues, is a difficult task. As a result, these out-year estimates are highly uncertain.