The Governor’s budget proposes $1.8 billion for CPUC in 2016-17, a net increase of $260 million (17 percent) compared to estimated expenditures in the current year. This year-over-year increase is largely the result of increased costs for the California LifeLine program, which we discuss below.

LAO Bottom Line. We recommend the Legislature withhold action on the proposal at this time and direct the administration to provide updated caseload and cost estimates for the LifeLine program with the Governor’s May Revision. There is significant uncertainty regarding future enrollment and costs for the program. Updated information would allow the Legislature to have greater confidence that the amount of funding allocated in the Governor’s 2016-17 budget reflects the best available cost estimates. The Legislature might also want to consider the degree to which CPUC has established the LifeLine program in a way that is consistent with legislative intent and priorities.

California LifeLine Program Established to Offer Basic Telephone Service to Low-Income Households. The Moore Universal Service Telephone Act of 1987 establishes the goal of offering basic telephone service at affordable rates to the greatest number of California residents. To help achieve this goal, state law directs CPUC to develop the California Lifeline program (LifeLine) to provide basic telephone service at a discounted cost to low-income households. In order to administer this program, CPUC is required to establish rules for (1) the minimum level of service a telephone plan would need to provide, (2) the rates and charges program participants would have to pay for discounted service, and (3) eligibility criteria to qualify to receive that service. State law also requires that rates for LifeLine enrollees be no more than 50 percent of basic telephone service rates.

To qualify for California’s LifeLine program, a household must have income below 150 percent of the federal poverty level (for example, about $36,000 annually for a family of four in 2016) or be enrolled in certain government programs for low-income households, such as Medi-Cal. For each household enrolled in the program, CPUC provides telephone companies (carriers) a maximum monthly state subsidy that is based on 55 percent of the most expensive basic landline service from the four largest carriers. The subsidy is meant to offset the lower rate charged to the consumer. In 2016, the maximum state subsidy is about $13 a month. The federal government also administers the federal Lifeline program that provides a monthly discount of about $9. In addition, the state provides (1) a per enrollee monthly payment to cover carriers’ administrative costs, (2) a one-time connection subsidy for new enrollees or enrollees that switch plans, and (3) a subsidy to cover other telephone taxes and surcharges for LifeLine enrollees. The revenues to fund the program are collected from a surcharge on telephone bills for non-LifeLine customers. The CPUC adjusts the level of the surcharge based on its projections of the amount of revenue needed to cover the costs of the program.

Addition of Wireless LifeLine Service Has Caused Significant Program Growth. Historically, LifeLine has included only traditional wireline (landline) service. Chapter 381 of 2010 (AB 2213, Fuentes) made changes to state law that gave CPUC the authority to allow LifeLine customers to choose between wireline and wireless service. In January 2014, CPUC expanded the program to allow wireless carriers to offer LifeLine service. Participating wireless plans are eligible for the same monthly subsidy amount as for traditional landline plans (about $13 per enrollee in 2016). Wireless carriers participating in the program must offer plans that meet minimum requirements set by CPUC, such as including a minimum of 1,000 monthly voice minutes to be eligible for the entire $13 state subsidy. The $9 federal subsidy and other state payments for administration, connection charges, and taxes and surcharges are also provided for wireless service, just as they are for landline service.

As shown in Figure 1, program enrollment had been steadily declining prior to adding wireless service in 2014. After adding wireless service, program enrollment has increased significantly. The additional enrollment has also contributed to significant cost increases. For example, the 2015-16 budget provided $346 million for the LifeLine program, which is more than twice 2012-13 LifeLine expenditures. The 2015-16 budget also included budget bill language that gave the Department of Finance (DOF) the authority, with 30-day notification to the Joint Legislative Budget Committee (JLBC), to appropriate additional funds for the program if costs were higher than projected. To cover the additional program costs, CPUC has increased the surcharge used to fund the program from about 1 percent of non-LifeLine customers’ intrastate telephone bills to over 5 percent. 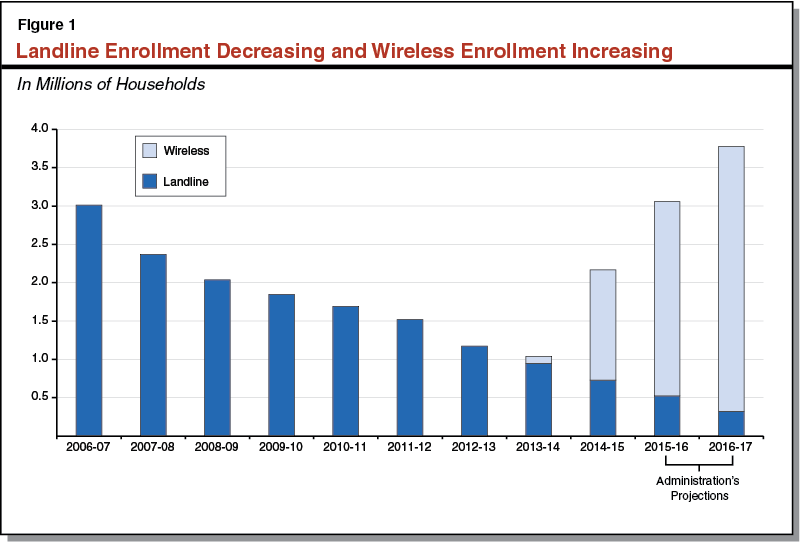 Wireless Plans Are Diverse, but Many Plans Are Free to Enrollees. A diverse set of wireless plans are available for LifeLine customers. Although all plans currently include at least 1,000 monthly voice minutes, plans offer different monthly rates, additional voice minutes, text messaging, and data. As of August 2015, there were 34 LifeLine wireless plans available and 21 of the available plans (62 percent) were offered at no cost to customers. Of the 21 plans that were offered for no cost:

The Governor’s 2016-17 budget provides $627 million for the LifeLine program—a $282 million (81 percent) increase over the amount allocated in the 2015-16 budget. The cost increase is largely driven by the administration’s projection of nearly 3.8 million subscribers (landline and wireless) by the end of 2016-17, which was developed in coordination with CPUC. In addition, similar to the 2015-16 budget, the proposed 2016-17 budget includes provisional language that gives DOF the authority to appropriate additional funds, with 30-day notification to JLBC, based on the amount of claims submitted by carriers.

Enrollment Estimates Subject to Substantial Uncertainty. The relatively recent addition of wireless service to the LifeLine program creates uncertainty about future enrollment and expenditures. The administration’s enrollment projections were based on the following key assumptions: (1) about 4.2 million households are eligible for the program and (2) 90 percent of the eligible households will enroll in the program by the end of 2016-17. There is significant uncertainty about both of these assumptions. For example, it’s unclear how many eligible households will ultimately enroll in the program by the end of the budget year. In addition, recent enrollment data provided by CPUC indicates that actual enrollment in recent months has been less than the enrollment projections used to develop the budget request. Specifically, the administration’s projection assumed that there would be 2.7 million subscribers by January 2016, but actual enrollment was only 2.2 million, or 20 percent less than projected. The lower enrollment might have been affected by the commission’s decision to suspend the connection subsidy for wireless service in July 2015, which could have resulted in higher costs for consumers. The connection subsidy was reinstated in December 2015.

May Revision Generally Used to Update Enrollment Estimates for Other Programs. Generally, the Governor’s May Revision provides updated expenditure estimates for caseload-driven programs, such as Medi-Cal and other health and human services programs. These updated estimates help the Legislature make budget allocations that are based on the most up-to-date information available. However, historically, enrollment and cost estimates for the LifeLine program are not updated at the time of the May Revision. In addition, the administration indicates that it does not currently plan to provide updated enrollment and cost information for the LifeLine program with this year’s May Revision. By relying on the best possible estimates for program expenditures, the Legislature can be more confident that it is providing an amount of funding that is adequate to cover program costs, while also preventing higher-than-necessary costs for non-LifeLine customers.

Direct Administration to Provide Updated Caseload and Cost Estimates With May Revision. We recommend the Legislature withhold action on the proposal at this time and direct the administration to provide updated caseload and cost estimates for the LifeLine program with the Governor’s May Revision. There is significant uncertainty regarding future enrollment in the program, and the updated information would help the Legislature make budget allocations that best reflect the likely costs of the program. In addition, this approach would be consistent with general practice for other programs with budgets that are substantially affected by program enrollment. We raise no concerns with the proposed budget bill language to provide DOF with flexibility to increase the appropriation for this program during the budget year.

The LifeLine program is intended to help ensure low-income households have access to affordable basic telephone services. To achieve this goal, state law gives CPUC authority to establish the major characteristics of the program. The commission’s decision to include wireless service appears to be consistent with legislative direction and goals. However, there are inherent trade-offs in the way CPUC has developed the program, such as how it has determined the amount of the wireless subsidies. These decisions affect the overall level of service provided, the discounts available to wireless LifeLine customers, and the overall costs of the program paid by non-LifeLine telephone customers. Through a formal proceeding, CPUC is continuing to evaluate the structure of the program, including developing standards for assessing affordability and analyzing whether current discounts align with program goals.

As the Legislature considers the administration’s request for additional funding for the LifeLine program, it might want to assess the degree to which the current structure of the program is consistent with its priorities and the intent of the program. In particular, as a result of recent changes, a wide variety of free wireless plans are available to LifeLine enrollees, including ones that contain features—such as text messaging and data—that exceed the minimum standards established by CPUC. The availability of such plans can provide substantial benefits to low-income households enrolled in the program. However, the recent changes have also contributed to a substantial increase in the surcharges paid by non-LifeLine customers. The Legislature might want to consider the following questions as it reviews the budget request from CPUC: