Initial Comments on the Governor’s
May Revision

Year-Over-Year Growth in Revenues, Spending, and Reserves. Figure 1 shows the administration’s estimated General Fund condition as of May 2016. While the May Revision lowers the administration’s January revenue estimates, the state’s General Fund tax revenues and spending are still estimated to grow by billions of dollars in both 2015-16 and 2016-17. The administration also estimates total reserves will grow by $3.2 billion in 2015-16 and $1.2 billion in 2016-17, as tax revenues exceed proposed spending.

Governor Proposes Total Reserves of $8.5 Billion. The Governor proposes ending 2016-17 with $8.5 billion in total reserves, about $4 billion more than the level assumed in the 2015-16 budget plan. The total includes $1.8 billion in the Special Fund for Economic Uncertainties (SFEU), the state’s discretionary reserve, and $6.7 billion in the Budget Stabilization Account (BSA), the state’s constitutional rainy day reserve.

Figure 2 lists some key features of and estimates in the administration’s May Revision. In this figure and the text below, we describe these features and estimates relative to the Governor’s budget proposed in January.

Revenues Down $2.2 Billion Since January. Relative to the Governor’s January budget proposal, the May Revision reflects a net $1.9 billion lower revenue estimate across 2014-15, 2015-16, and 2016-17 combined. The largest driver of this change is a reduction of $1.8 billion in revenues from the personal income tax in 2015-16 and 2016-17 combined. In addition, the administration lowered its estimate of the 2014-15 beginning General Fund balance by $253 million, mainly due to a reduction in Proposition 30 revenues booked to 2013-14 under the state’s complex budgetary accrual policies.

Reserves and Required Debt Payments Down $2 Billion. Proposition 2 (2014) requires the state to make minimum annual deposits into the BSA and minimum annual payments toward certain eligible debts. Largely as a result of lower revenue estimates, the administration’s estimate of these requirements are $1.6 billion lower in the May Revision relative to the Governor’s budget. This includes a reduction in the required reserve deposit of $1.3 billion and a reduction in required debt payments of $264 million. In addition to these changes, the administration proposes to reduce the SFEU discretionary reserve balance by $442 million relative to its proposed level in January. The Governor, however, continues to propose a $2 billion optional deposit—above constitutionally required levels—into the BSA.

Proposition 98 General Fund Spending Up $389 Million. Although the administration’s estimates of revenues are lower relative to January, its estimate of the Proposition 98 minimum guarantee is higher. Specifically, for 2014-15, 2015-16, and 2016-17 the estimate of the minimum guarantee is higher by a combined $626 million. The state General Fund would fund $389 million of this increase, while local property tax revenues would account for the remaining $237 million.

Other Proposals. The May Revision includes some other policy proposals. The administration endorses a Senate proposal to fund the construction of housing for the homeless using a $2 billion bond backed by Proposition 63 (2004) revenues. The May Revision sets aside an additional $500 million ($200 million General Fund) for future collective bargaining agreements. The administration includes new budget commitments, of about $25 million each, for the California State University and the California Department of Corrections and Rehabilitation.

State Actions Drive Future Costs. Since the Governor released his budget in January 2016, the state has made several significant budget commitments. Together, these budgetary commitments represent substantial new ongoing costs for the state. They include:

Governor Allocates About $6.1 Billion in Discretionary Resources. In assembling the May Revision, the Governor was faced with decisions about how to allocate roughly $6.1 billion of discretionary General Fund resources. (“Discretionary,” in this context, excludes billions of dollars controlled by constitutional funding requirements, such as Proposition 98 and Proposition 2, and added costs to maintain existing policies.) This allocation includes decisions made by the Governor in both the January budget proposal and the May Revision. As we noted in the Overview of the Governor’s Budget, the Governor has prioritized reserves and one-time spending. As shown in Figures 3 and 4, the Governor maintains these priorities in the May Revision. As it crafts the state budget, the Legislature may choose its own preferred mix of reserves, one-time spending, and ongoing budget commitments using these discretionary resources. 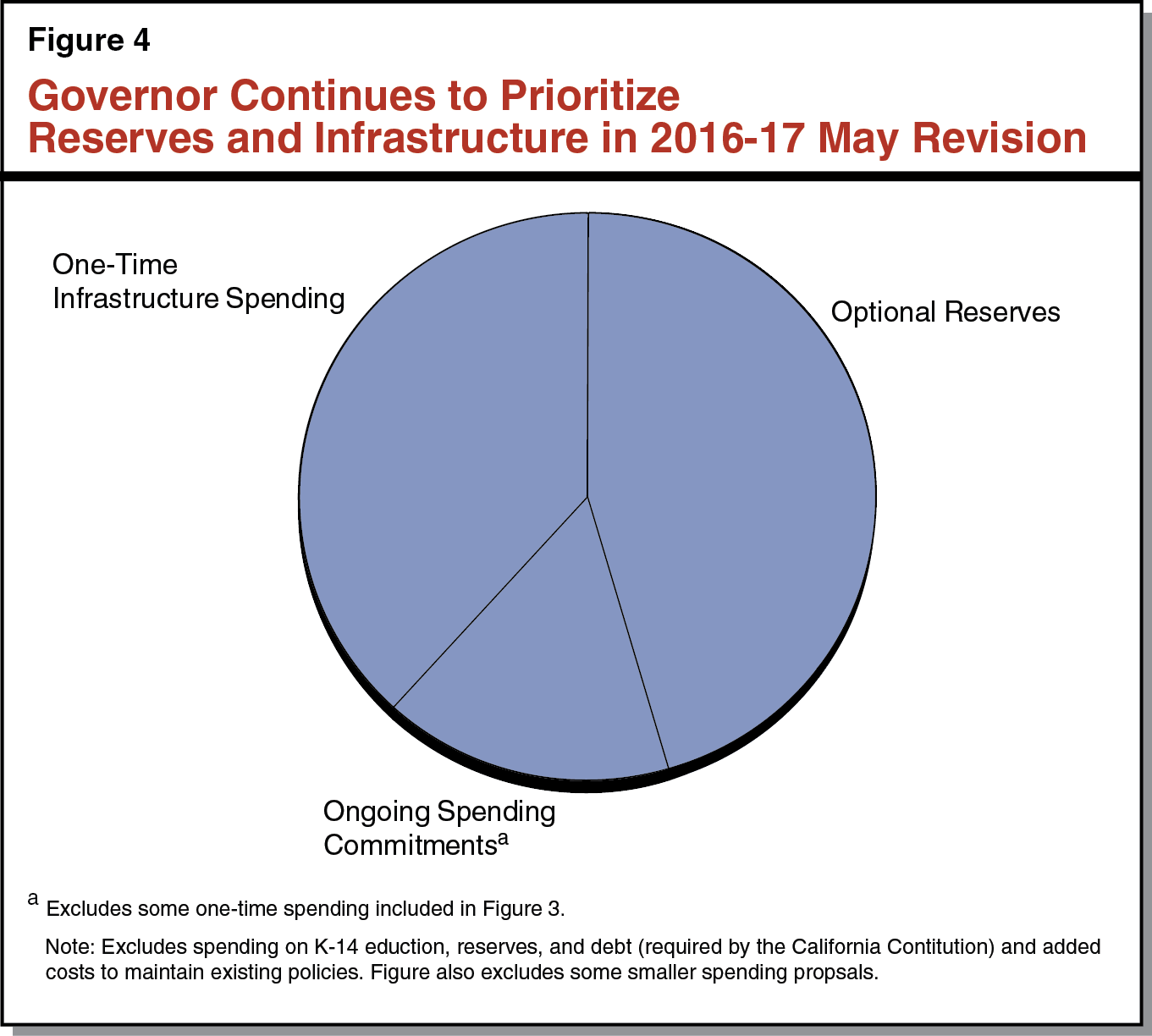 State Has Made Significant Budgetary Commitments That Carry Ongoing Costs. In January, our office noted that the Legislature may have some funds available for targeted ongoing commitments—particularly if the Legislature passed an extension of the MCO tax. Since January, the state has passed an extension of the MCO tax and made several new ongoing budgetary commitments, some of which carry substantial ongoing costs for the state in future years. These changes, together with reduced estimates of revenues and reserves, mean there is now less capacity than there was in January to make additional budgetary commitments.

Robust Budget Reserve Goal Recommended. Relative to the state’s budgetary position in January, the additional budgetary commitments described above leave the state budget somewhat more vulnerable to the next economic downturn. In the May Revision, the Governor lowered his 2016-17 proposed level of total reserves to $8.5 billion, nearly $2 billion lower than in his January proposal. Our office suggests the Legislature adopt a robust target for budget reserves for the end of 2016-17. There is no single ideal level for reserves. However, at this point in a mature economic expansion, we think it would be prudent to pursue a target for total reserves that is at least as large as the $8.5 billion amount in the Governor’s revised budget proposal.