Proposed Reserves in the Governor’s May Revision

This post gives more detail on the Governor’s reserve proposal in the 2016-17 May Revision.

State Has Two Budget Reserves. The state has two budget reserves: the Special Fund for Economic Uncertainties (SFEU) and the Budget Stabilization Account (BSA). Both reserves help insulate the budget from situations where revenues underperform budget assumptions. The Legislature can appropriate funds in the SFEU for any purpose, while the use of funds in the BSA is more restricted.

Constitutionally Required BSA Deposits. Proposition 2 (2014) took effect beginning in the 2015-16 fiscal year. It establishes a minimum amount that the state must deposit each year into the BSA. Figure 1 shows the method for calculating this amount. First, the state sets aside 1.5 percent of General Fund revenues (the “base amount”). Second, the state sets aside a portion of capital gains that exceed a specified threshold (“excess capital gains”). The state combines these two amounts and allocates half to increase the balance of the BSA and half to pay down certain eligible state debts. 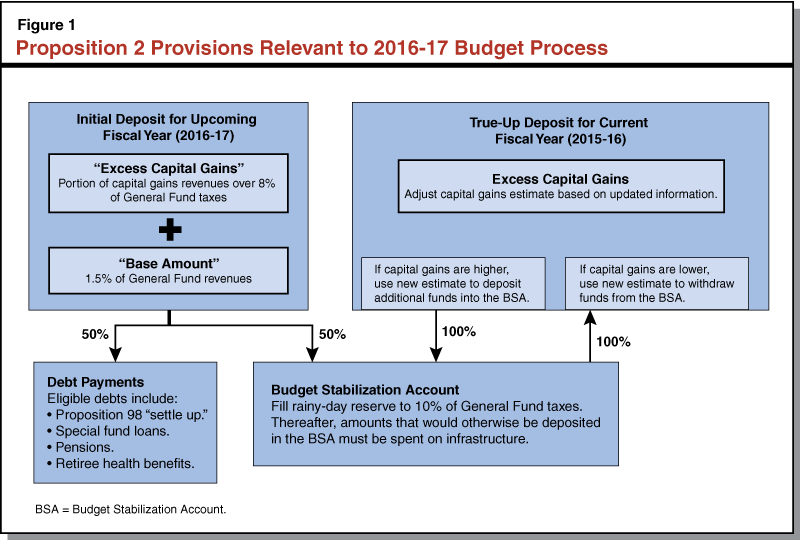 Annual Revision of BSA Deposits. Initial estimates of future capital gains revenues are highly uncertain. As a result, Proposition 2 includes a “true up” process that attempts to align original estimates with actual revenues. In this process, the state reevaluates each year’s BSA deposit twice: once in each of the two subsequent budgets. The state revises the BSA deposit up (down) if excess capital gains are higher (lower) than the state’s prior estimates. Therefore, this year, there will be an initial estimate of the 2016-17 BSA deposit requirement and a revised estimate of the 2015-16 deposit requirement.

Lowers Estimates for 2016-17 Required Deposits. Since the Governor released his budget proposal in January, the administration has revised its estimate of personal income taxes resulting from capital gains income in 2015 through 2017. This results in lower BSA deposit estimates for 2015-16 and 2016-17. Figure 2 shows the administration’s revised estimates of BSA deposits 2015-16 and 2016-17. The administration lowered its estimate of the initial 2016-17 deposit to $1.3 billion—down from $1.6 billion in January. The administration also now estimates the state will need to “true down” (reduce) the 2015-16 initial BSA deposit by $39 million, rather than the $1.0 billion “true up” (or increase) estimated in January. In the May Revision, the Governor also continues to propose a $2 billion optional deposit into the BSA.

Governor Reduces Proposed SFEU Increase to $672 Million. In addition to the changes listed above, the May Revision reduces the estimated level of the SFEU relative to January. The May Revision includes a $672 million increase—down from the $1.1 billion year-over-year increase in the January budget proposal. Lower revenue estimates and higher school spending requirements made it more difficult to expand the SFEU in the May Revision.

Governor Reduces Total Reserve Proposal to $8.5 Billion. As a result of all of these revisions, the Governor’s total May Revision reserve proposal is $8.5 billion—down $1.7 billion from its level in January. These total reserves, however, still represent an increase of about $4 billion over the level assumed in the 2015-16 budget plan.

Concerns With Administration’s Proposal for Optional BSA Deposit. In the May Revision, the administration proposes budget bill language that clarifies the intent  that the rules of Proposition 2 apply to the $2 billion optional BSA deposit. If these rules did apply, the Legislature could only access these funds under certain conditions. Our office has raised concerns with this proposal, noting that it would limit legislative control.