This post presents our multiyear outlook for California’s General Fund through 2019-20 based on current state law and policies, as modified by the Governor’s May Revision proposals. This is part of a series of posts which summarize our office’s assessments of the administration’s May Revision estimates and proposals.

Estimates Based on Economic Growth Scenario. The outlook we present in this post is based on assumptions about what will happen in the economy and the stock market over the next several years. In particular, we assume the U.S. and California economies will continue to grow, as described here. As we have noted, this assumption does not represent a prediction. On the contrary, other economic scenarios—such as periods of stagnation, recession, or even faster economic growth—are also possible during one or more years between now and 2020. In reality, the budget will be better or worse off than we estimate depending on future economic conditions and future state policy changes.

Assume Current State Policies, Plus Governor’s May Revision Proposals. Each year, in our May Revision multiyear outlooks, we provide our office’s assessment of the future condition of the budget based on the Governor’s budget proposals (including his May Revision proposals). For example, the multiyear budget outlooks of both our office and the administration include amounts that implicitly assume future agreements with state employee bargaining units similar to those of the recent correctional officers’ agreement. This assumption carries hundreds of millions of dollars of additional costs related to state employee compensation in future years. Beyond the Governor’s May Revision proposals, we assume no other changes in current law and policy. For example, we assume the temporary taxes passed by voters in Proposition 30 expire, consistent with current law. Similarly, we  assume the tax on managed care organizations passed earlier this year expires at the end of 2018-19.

2016-17 Ends With $8.7 Billion in Total Reserves. Figure 1 summarizes our office’s near-term outlook for the General Fund under the Governor’s proposed policies. Our office estimates that 2016-17 would end with $8.7 billion in total reserves—slightly above the $8.5 billion figure in the administration’s own May Revision estimates. We estimate that $7.8 billion of these total reserves would be held in the Budget Stabilization Account (BSA), the state’s constitutional rainy day reserve—withdrawals from which are limited under the terms of Proposition 2. (This includes a $2 billion optional BSA deposit in 2016-17, as proposed by the Governor.)  The administration estimates a lower BSA balance for this period, but a higher balance in the state’s traditional reserve (the Special Fund for Economic Uncertainties). The difference is largely attributable to our office’s higher estimate of capital gains revenues in 2015-16, which result in a larger 2015-16 BSA requirement. Our office’s estimate of Proposition 98 spending is similar to the administration’s estimate in 2016-17.

Assuming Economic Growth, Surpluses Through 2019-20 in LAO Outlook. Figure 2 displays our office’s multiyear outlook for the General Fund. The top part of each bar shows our projection of the annual BSA deposit. The bottom part of each bar shows the annual operating surplus (the amount by which projected revenues exceed expenditures). As the figure shows, under our office’s May 2016 economic growth scenario assumptions, we estimate the state’s budget has the capacity to pay for the Governor’s May Revision proposals over the period. After 2016-17, the state would have a few billion dollars available each year to build reserves or make additional commitments. This outlook involves various assumptions. In particular, it assumes the economy and stock prices continue to grow throughout the period and that the state makes no additional budget commitments beyond the Governor’s proposals. (The administration estimates the same set of policies results in operating deficits by 2020.) 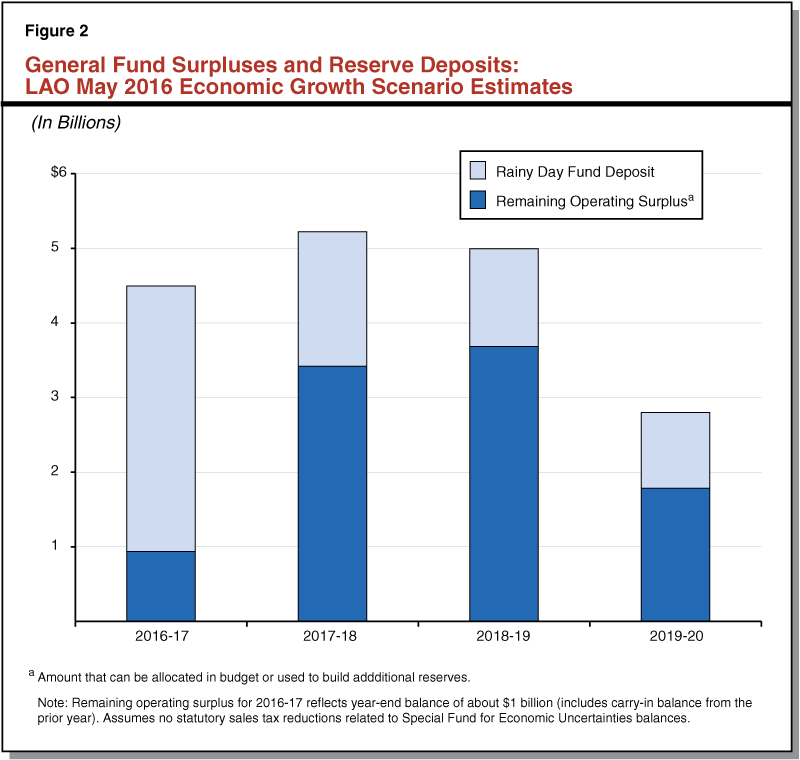 Administration Projects Higher Health and Human Services (HHS) Spending. The administration’s estimates of non-Proposition 98 spending between 2017-18 and 2019-20 are considerably higher than ours. In particular, the administration’s estimate of spending in the HHS agency appears to be over $4 billion higher than our estimate for HHS spending in 2019-20. This is now the main difference in our respective multiyear budget outlooks. Noticeable differences in our estimates of future HHS spending have been present in other recent budget outlooks.

LAO Estimate of HHS Spending Assumes Significant Growth in Medi-Cal. Our office’s estimates currently grow aggregate HHS General Fund spending by 6.5 percent per year between 2016-17 and 2019-20. This estimate includes hundreds of millions of dollars in additional costs related to the state minimum wage increase and significant caseload growth in the largest HHS programs: Medi-Cal, the Department of Developmental Services, and the In-Home Supportive Services program. In our estimates, General Fund Medi-Cal spending grows by 9.3 percent annually, on average, between 2016-17 and 2019-20. Growth in this program includes the increasing state cost share for the optional Medi-Cal expansion population and a decreased federal cost share for the Children’s Health Insurance Program in 2019-20. We discuss our methodology for estimating future spending in each major HHS program each November in our Fiscal Outlook and update these estimates each May.

Higher Revenues Under LAO Economic Growth Scenario. As we have noted, our office’s growth scenario estimates of tax revenues are $2 billion or more above the administration’s multiyear forecast estimates in 2017-18, 2018-19, and 2019-20. Our office also estimates higher local property tax revenues over the period. Due to these and other factors, relative to the administration, most of the state’s higher revenues under our growth scenario provide bottom line benefit to the General Fund in 2018-19 and 2019-20.

New Budgetary Commitments Resulted in Narrower Operating Surpluses. Estimates of future budget surpluses have narrowed largely as a result of new spending commitments by the state in recent months. These commitments include an increase in the state minimum wage, which we estimate could cost the state billions of dollars per year after full phase in of the law. The state also faces increased state employee compensation costs as the administration negotiates more agreements with bargaining units.

State More Vulnerable to Economic Downturn. In our November 2015 Fiscal Outlook, we showed two alternate scenarios that estimated the state budget’s ability to withstand an economic slowdown or mild recession. At the time, we concluded the budget appeared to be in a position to withstand an economic slowdown and that reserves could cover much of a shortfall associated with a more severe economic recession. However, we also noted that this outlook would change in the presence of new ongoing budgetary commitments. Indeed, as the state has taken on new commitments, this outlook has changed. While the state’s accumulated reserves would help offset some budgetary pressure associated with an economic downturn, the state’s budget is now more vulnerable to a future economic downturn than it was in November. There are currently few signs of such an economic downturn, but the economy can change quickly. This is one reason why we have suggested the Legislature aim to pass a state budget with a robust level of total reserves this year.