Tweet
We reviewed the proposed memorandum of understanding (MOU) for Bargaining Unit 12 (Craft and Maintenance). Bargaining Unit 12 is represented by the International Union of Operating Engineers (IUOE) Locals 3, 39, and 501. This review is pursuant to Section 19829.5 of the Government Code.

This analysis of the proposed labor agreement between the state and Bargaining Unit 12 (Craft and Maintenance) fulfills our statutory requirement under Section 19829.5 of the Government Code. State Bargaining Unit 12’s current members are represented by the International Union of Operating Engineers (IUOE) Locals 3, 39, and 501. The administration has posted the agreement and a summary of the agreement on its website. The union also has posted a summary of the agreement on its website. (Our State Workforce webpages include background information on the collective bargaining process, a description of this and other bargaining units, and our analyses of agreements proposed in the past.)

If this proposal is approved by the Legislature and Unit 12 members, the Governor would achieve his goal of implementing a new funding plan for retiree health benefit liabilities and reducing retiree benefits for future Unit 12 members. These actions would lower state retiree health costs significantly over the long term. In order to reach this agreement, however, the Governor agreed to propose various pay and benefit increases for Unit 12 members in the near term. (He has chosen to do this for other state bargaining units too—see our analyses of agreements with Units 6 [Corrections], 9 [Professional Engineers], and 10 [Scientists].) These proposed pay and benefit increases—along with the state contributions to match employee payments to a retiree health funding account—would be a significant new budgetary commitment for the state with both near- and long-term effects on state obligations.

Three General Salary Increases. The proposed agreement would increase pay by a specified percentage for all Unit 12 members on three separate occasions—3 percent in 2016-17, 4 percent in 2017-18, and 3 percent in 2018-19. This is a cumulative increase of 10.3 percent over the course of the agreement. Salary increases also increase state costs for salary-driven benefits, including state contributions to employees’ pension, Social Security, and Medicare benefits.

Classification-Specific Salary Increases. In addition to the general salary increases discussed above, the agreement would provide employees of specified classifications (about 13 percent of Unit 12 members) additional pay increases. The administration indicates that these salary increases are to address recruitment and retention issues.

Increase State Costs for Health Benefits. The state contributes a flat dollar amount to Unit 12 members’ health benefits that was last adjusted in January 2015. The proposed agreement would adjust the amount of money the state pays towards these benefits—to reflect 2016 CalPERS premiums—immediately following the ratification of the agreement by the state and Unit 12 members and again in January 2017, 2018, and 2019. Under the agreement, the state’s contribution would be adjusted so that the state pays 80 percent of an average of CalPERS premium costs plus 80 percent of average CalPERS premium costs for enrolled family members—referred to as the “80/80 formula.” The state’s contributions would not be increased thereafter unless agreed to in a future agreement.

One-Time “Transitional Supplement” Payment to Caltrans Employees. The current MOU—ratified by union members and the Legislature in 2013—and the summary provided by CalHR to the Legislature in 2013 specify that Unit 12 Caltrans employees who are paid on a semi-monthly basis will transition to being paid on a monthly basis by July 1, 2014. The current agreement provides no compensation to affected employees for this transition. The administration informs us that this transition never took place because a committee of eight union and administration representatives were unable to agree on a process to transition employees to the new payroll cycle by July 1, 2014. The proposed agreement indicates that this transition now will take place “approximately three months after ratification” of the agreement. After this transition, the agreement would provide affected employees (about 4,400 Unit 12 members) a one-time payment equivalent to employees’ semi-monthly gross salary but not exceeding $1,200. The administration indicates (1) this transition is necessary to improve departmental payroll operations and (2) the one-time payment is necessary to help employees make the transition to being paid once each month.

Increase Footwear Allowance. Under the current MOU, Unit 12 members who work for Caltrans and the DWR annually receive $82 (paid either as $82 each year or $164 every other year) as an allowance to purchase footwear consistent with departmental policy. The agreement would provide this payment to Unit 12 members who work for California Highway Patrol (CHP) and the California Department of Corrections and Rehabilitation (CDCR)—approximately 2,900 full-time-equivalent employees. This payment is subject to Social Security and Medicare payroll taxes but does not affect employees’ pension benefits.

Increase Overtime Meal Allowance. Under the current MOU, Unit 12 members who work at Caltrans and CDCR who are required to work at least two hours longer than their regular work hours are eligible to receive $6 as a meal allowance. In the case of Unit 12 members who work at CDCR, the allowance is provided as a meal ticket that must be used at an institution’s snack bar or employee dining room within 24 hours. The agreement would increase (1) the overtime meal allowance for employees at Caltrans and CDCR by $2 (from $6 to $8) and (2) the amount of time CDCR employees have to use the meal ticket from 24 hours to ten days.

Proposed Funding Changes. Until recently, like most governments in the U.S., California did not fund health and dental benefits for its retirees during their working careers in state government. This has resulted in large unfunded state liabilities for the benefits. The state now pays for retiree health and dental benefits on an expensive “pay-as-you-go” basis. This means that later generations pay for benefits of past public employees.

The current MOU requires Unit 12 employees to contribute 0.5 percent of their salary towards prefunding retiree health benefits. This contribution level is specified in the agreement and is not based on actuarial calculations. These contributions are deposited to a retiree health funding trust account. Under no circumstance is an employee or beneficiary or survivor able to recover contributions an employee makes to the retiree health funding account during his or her career, even if the employee leaves state service after a few years and is ineligible for retiree benefits. The state does not make regular contributions to prefund this benefit for Unit 12 members under the current MOU. At some point in the future, some share of the state’s pay-as-you-go obligation to retiree health benefits will be paid from this account.

The proposed agreement would institute a new arrangement to address unfunded retiree health benefits for Unit 12 members. The new arrangement is consistent with prefunding arrangements included in other recent bargaining agreements ratified by the Legislature—see our analyses of agreements with Units 6 (Corrections), 9 (Professional Engineers), and 10 (Scientists). While the administration’s plan seems to be to keep making pay-as-you-go benefit payments for many years, the new arrangement would seem to base employee and state contributions to prefund this benefit based on the actuarially determined “normal costs” each year for the future retiree health benefits earned by today’s Unit 12 workers. Specifically, the agreement establishes a “goal” that employees and the state each contribute half of the normal cost by July 1, 2019. These contributions would be deposited in the same trust account that currently is used for prefunding Unit 12 retiree health benefits.

Under the agreement, all Unit 12 members would contribute 1.9 percent of pay to a retiree health funding account beginning in 2017-18, rising to 3.3 percent of pay in 2018-19, and rising again to 4.6 percent of pay beginning in 2019-20. The state would match these contributions to the trust account. In 2019-20, total employee and state payments to the account would be about $50 million, which is roughly equal to the actuarially estimated Unit 12 rank-and-file normal costs under the most recent state valuation (specifically, that valuation’s “full funding policy” scenario with an assumed 7.3 percent discount rate). Over the decades, the state will fund a growing share of its payments to the benefits received by retirees from the account that employees and the state contributed to during employees’ careers.

Significant New State Budget Commitment. As Figure 1 shows, the administration estimates that this agreement would increase annual state costs by about $158 million ($50 million General Fund) by 2019-20. Based on the administration’s estimated costs of past Unit 12 agreements submitted to the Legislature for ratification, this agreement would increase annual state costs more than any of the Unit 12 agreements ratified since at least 2005 (when the Government Code was changed to require our review of labor agreements).

Extension of Provisions to Management Further Increases Costs. When rank-and-file pay increases faster than managerial pay, “salary compaction” can result. Salary compaction can be a problem when the differential between management and rank-and-file is too small to create an incentive for employees to accept the additional responsibilities of being a manager. Consequently, the administration often provides compensation increases to managerial employees that are similar to those received by rank-and-file employees. The administration estimates that in 2016-17, this agreement will increase costs associated with Unit 12 supervisors and managers by $8.8 million. We think it is reasonable to estimate that extending a comparable increase in compensation to Unit 12 supervisors and managers will increase state annual costs by between $30 and $50 million by 2019-20. More than $6 million of these costs would fund the state’s share of the Governor’s plan to prefund retiree health benefits for Unit 12 managers and supervisors. None of the estimated costs of extending provisions to managers are reflected in Figure 1.

Leave Cash Outs Can Reduce Long-Term Costs. The average state employee earns a significant number of days off each year. During the five years of furloughs from 2008-09 and 2012-13, Unit 12 members received 70 furlough days in addition to vacation or annual leave they earned throughout the year. As Figure 2 shows, the result of these furloughs was that the average Unit 12 member’s vacation/annual leave balance increased by about two-thirds between 2008 and 2012. As the figure shows, these balances have been coming down since 2012. 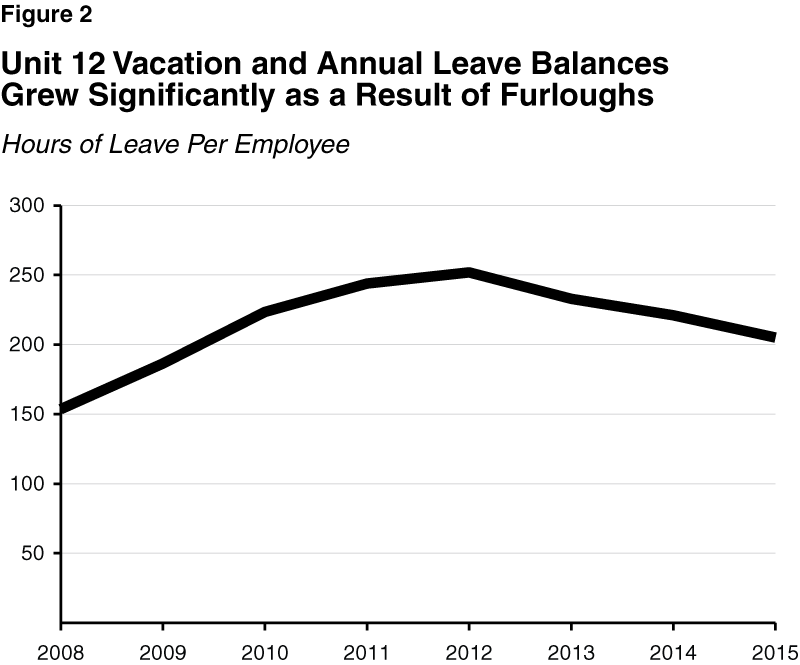 As we explain in our March 14, 2013 report After Furloughs: State Workers’ Leave Balances, unused leave balances create a liability for the state because the state must compensate employees for any unused leave—at their final pay rate—when the employee separates from state services. Employees typically earn their highest salary during their last year of service with the state. We estimate that the total value of Unit 12 members’ unused vacation and annual leave will be more than $58 million after employees receive the first general salary increase proposed under the agreement. Offering cash out programs in which employees can cash out unused leave at their current pay level potentially could reduce the state’s long-term costs associated with these liabilities.

Long-Term Fiscal Effects of Retiree Health Proposals Uncertain. We long have recommended that the state move toward funding normal costs for retiree health benefits. This agreement—according to the best information available now—would achieve that important goal. Over the long term, by generating investment gains in a dedicated retiree health funding account, this approach would significantly reduce state taxpayer costs. In addition, the proposed reduction of future Unit 12 retiree benefits also would significantly reduce state costs over the long term.

The administration has submitted no Unit 12-only actuarial valuation specifically tied to this agreement’s retiree health and dental benefit provisions. Moreover, as with other recent labor agreements, there is no detailed analysis of the complex legal issues involved with the new retiree health provisions. If the Legislature and Unit 12 members approve the agreement, it will be important to monitor future state actuarial valuations to see if the new funding plan is on track to achieve the goal of eliminating Unit 12 unfunded liabilities over the next 30 years or so.