On November 16th our office released its annual Fiscal Outlook. The outlook provides our assessment of California’s budget condition through 2020-21. This post provides more details on the outlook’s estimates of constitutionally required debt payments and reserve deposits under Proposition 2.

Key Provisions of Proposition2 for Calculating Requirements. Figure 1 shows the method for calculating the annual amount of constitutionally required BSA deposits and debt payments. First, the state sets aside 1.5 percent of General Fund revenues (the “base amount”). Second, the state sets aside a portion of capital gains that exceed a specified threshold (“excess capital gains”). The state combines these two amounts and allocates half to increase the balance of the BSA and half to pay down certain eligible state debts. As shown below, under Proposition 2’s true up provisions, the state revisits the capital gains portion of the estimate twice: once in each two subsequent fiscal years. We provide more detail about the true up requirements in the 2017-18 budget below. 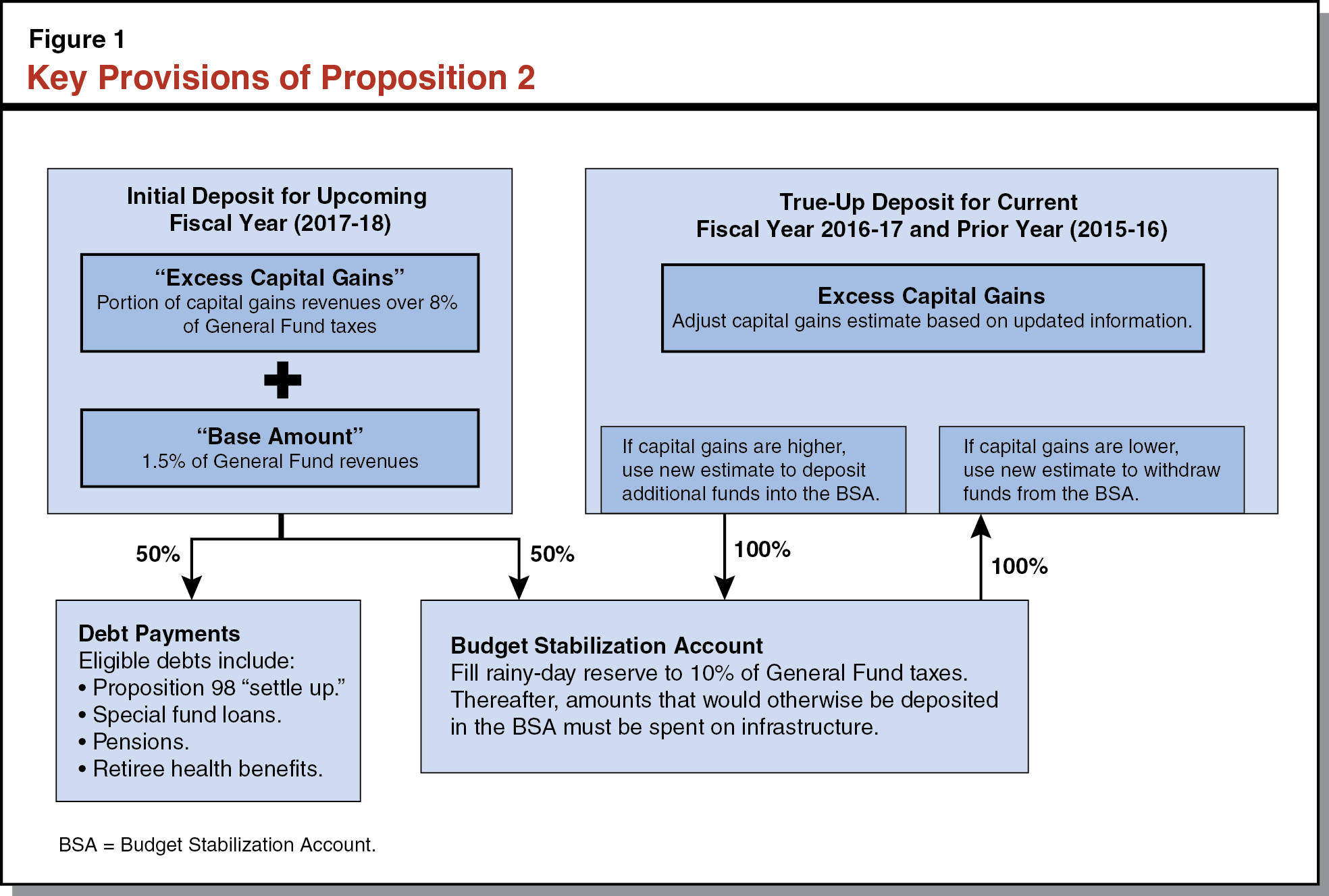 Estimates of Proposition 2 Requirements. Our Fiscal Outlook provides an assessment of the budget’s condition under two difference scenarios of the economy’s performance over the next five years. These are: (1) an economic growth scenario, in which the economy continues to grow, and (2) a mild recession scenario, with a big stock market decline, that begins in the middle of calendar year 2018. Figure 2 shows our estimates of Proposition 2 reserve requirements under the growth and recession scenarios.

Reserve deposits and debt payments range from $1.6 billion to $2 billion in the growth scenario and somewhat less than $1 billion to $1.9 billion in the recession scenario. Differences in these requirements are largely attributable to differences in our assumptions about the stock market’s performance between the two scenarios. When the stock market performs well and the state has more capital gains revenues, Proposition 2 requirements are generally higher.

State Has Two Budget Reserves. The state has two budget reserves: the Special Fund for Economic Uncertainties (SFEU) and the Budget Stabilization Account (BSA). Both reserves help insulate the budget from situations where revenues underperform budget assumptions. The Legislature can appropriate funds in the SFEU for any purpose, while the use of funds in the BSA is more restricted. The State Constitution has specific rules regarding how and when the state may make withdrawals from the BSA.

Annual Revision of BSA Deposits. Initial estimates of future capital gains revenues are highly uncertain. As a result, Proposition 2 includes a “true up” process that attempts to align original estimates with actual revenues. In this process, the state reevaluates each year’s BSA deposit twice: once in each of the two subsequent budgets. The state revises the BSA deposit up (down) if excess capital gains are higher (lower) than the state’s prior estimates. In the typical fiscal year, then, the state would make an initial estimate of the BSA deposit for the budget year, and a revised estimate for each of the two years.

$2 Billion Optional BSA Deposit Covers This Year’s True Ups. The 2016-17 budget package set aside a $2 billion optional deposit and specified that these funds would be used to meet true up requirements for 2015-16 and 2016-17. That is, in the June 2017 budget plan, these funds should cover higher BSA true up deposit requirements that do not exceed $2 billion. Our office estimates the state’s true up requirements are $378 million for 2015-16 and $700 million for 2016-17. Since these true ups are together less than $2 billion, we assume no additional true ups are made, leaving the already-revised 2015-16 deposit and initial 2016-17 deposits unchanged. The $2 billion optional deposit made in 2016-17 also remains unchanged in the BSA.

BSA Approaching Maximum Size in Last Year in Growth Scenario. Under Proposition 2, the state must deposit money into the BSA until its total reaches a maximum amount of 10 percent of General Fund taxes. In our outlook, this ceiling increases from about $12.3 billion in 2016-17 to a projected $14.7 billion in 2020-21 under the growth scenario. In that scenario, the balance of the BSA is $13.7 billion, about $1 billion below the ceiling. Once the BSA reaches its maximum size, funds that would have been transferred into the BSA must be spent on building and maintaining infrastructure.