In 2014, the Legislature passed new laws intended to improve state oversight of hydraulic fracturing, or "fracking." In this web post, we provide a progress report on the implementation of these new laws and a high-level overview of how hydraulic fracturing is used to stimulate oil and natural gas production.

Hydraulic Fracturing: How It Works and Recent State Oversight Actions

Over the past decade, the practice of stimulating oil and natural gas production through the use of hydraulic fracturing, or “fracking,” has come under increasing scrutiny, particularly over concerns about the potential for contamination of groundwater aquifers and other environmental and health-related issues. In response to these concerns, the Legislature passed new laws in 2014 intended to improve state oversight of hydraulic fracturing in California. Specifically, the laws (1) more closely regulate hydraulic fracturing, (2) require drillers to be more transparent about their operations, and (3) require studies to be undertaken to better inform future policy decisions. In this web post, we summarize the recent legislation and provide an update on its implementation by the Department of Conservation (DOC) and other state agencies. We start by providing a high-level overview of how oil and natural gas reservoirs are formed and why hydraulic fracturing is sometimes used to stimulate wells.

Overview of Oil and Gas Drilling in California

Oil and Natural Gas Reservoirs Are Formed Over Millennia. Oil and natural gas reservoirs are found in the earth’s crust, which is typically about 18 to 30 miles thick under the continents and 3 to 5 miles thick under the oceans. Millions of years ago, organic matter—mostly from dead plants and marine microorganisms—accumulated at the bottom of the sea. This organic matter was buried by sand, silt, and other sediments. Over time, natural forces such as heat and pressure compacted the layers of sediments into layers of rocks such as sandstone and shale. These natural forces also broke down the organic matter, converting it into oil and natural gas. Figure 1 illustrates how a cross-section of the earth’s crust can look after this process has taken place. 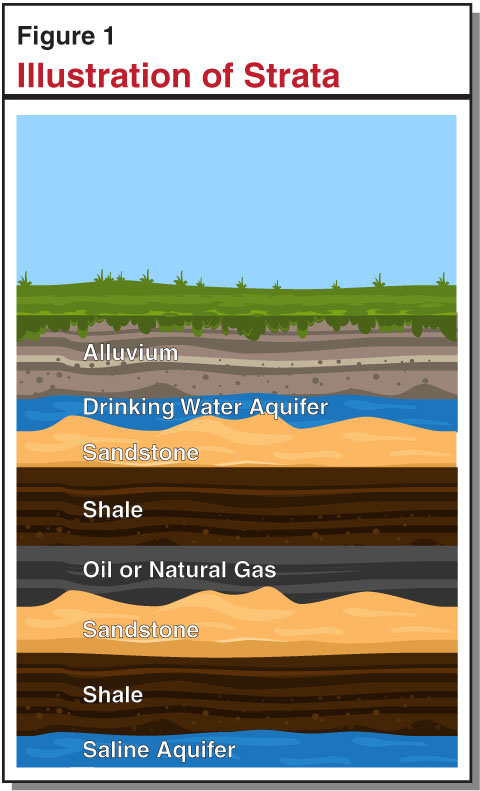 California’s Oil and Natural Gas Fields Are Concentrated in Certain Areas. As shown in Figure 2, California’s oil fields are concentrated mainly in the southern coastal regions and in the San Joaquin Valley. The state’s natural gas fields are mostly located in the northern part of the central valley. Currently, there are roughly 83,500 wells in California producing oil or natural gas. 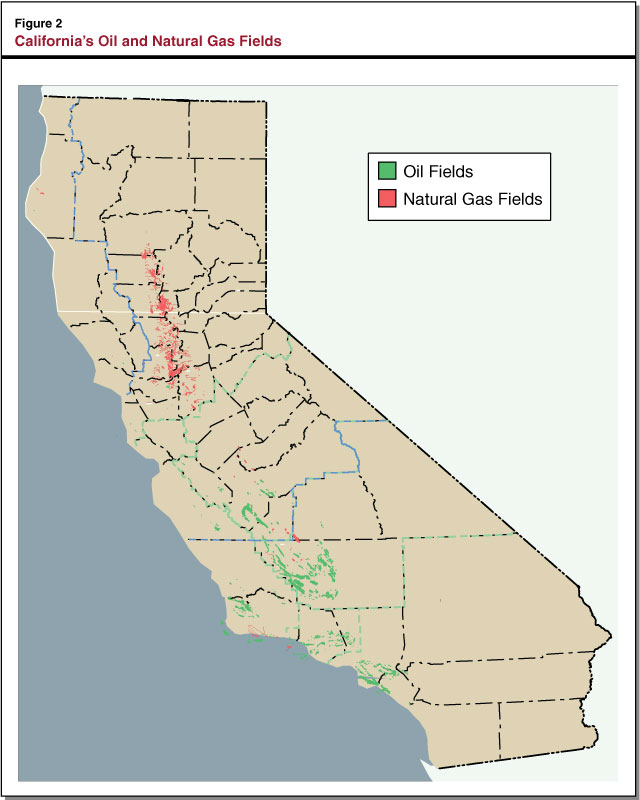 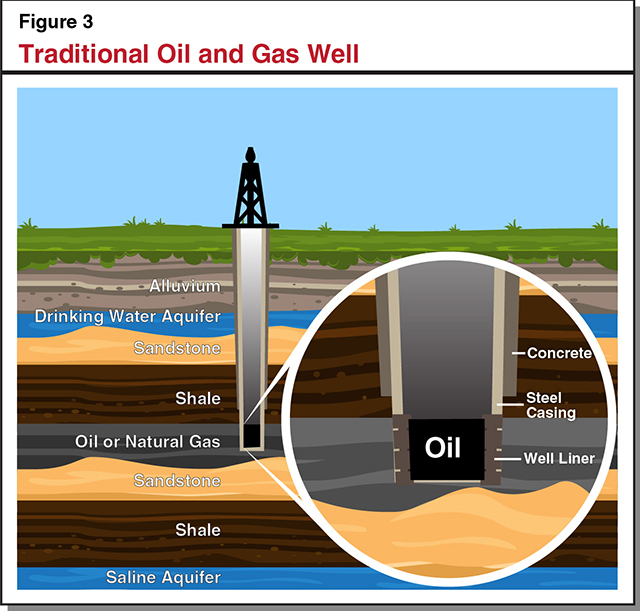 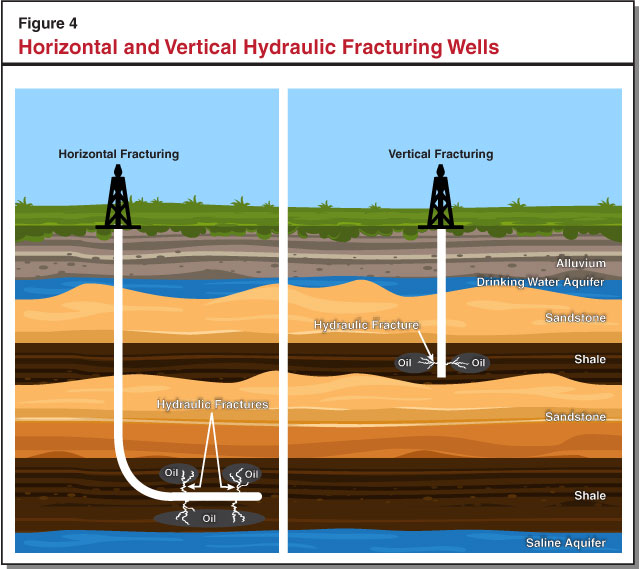 Well Stimulation in California. In California, about 86 percent of the well stimulations undertaken in 2014 and 2015 were on oil and natural gas production wells. The remainder of stimulations were on injection wells used to dispose of produced water (see below) and flowback fluid.

In Chapter 313 of 2014 (SB 4, Pavley), the Legislature found that insufficient information is available to fully assess the potential effects of hydraulic fracturing and other well stimulation treatments in California, including environmental, occupational, and public health hazards and risks. The Legislature enacted several requirements designed to provide greater transparency and accountability to the public regarding well stimulation treatments; emissions to the environment; and the handling, processing, and disposal of well stimulation wastes.

In addition, Chapter 561 of 2014 (SB 1281, Pavley) requires reporting of specific data regarding the source, volume, and storage and disposal status of water produced during oil and natural gas drilling operations—including during hydraulic fracturing operations—in order to provide regulators and policy makers with key information to evaluate how industry practices affect groundwater.

Update on Implementation of Recent Legislation

Below, we provide an update on the implementation of the key provisions of SB 4 and SB 1281.

Implementation Status of SB 4. Senate Bill 4 imposes several requirements on state agencies and the oil and natural gas industry. Under SB 4, monies from the Oil, Gas, and Geothermal Administrative Fund (OGGAF)—which is funded by an annual charge upon each person operating or owning an interest in an oil or gas well—may be used by DOC, the State Water Resources Control Board (SWRCB), and regional water quality control boards to carry out the requirements of the bill. The following actions have been taken to date to implement the bill’s main requirements:

Second, SB 1281 requires well owners to report specified water-related information monthly to DOC. Required information includes (1) the amount of oil, natural gas, and water produced from each oil and natural gas well; (2) the source, volume, storage, and disposal status of all water used in or generated by oil and gas field activities; and (3) the ultimate use, disposal method, or method of recycling or reuse. The department has developed a standard format for operators to report this information and quarterly reports are available here. According to DOC, operators by and large have been reporting this information, but there are several operators who are failing to report their water data. As of October 2016, DOC estimates it was receiving approximately 90 percent of the data on produced and injected water. Notices of violations have been sent to those operators who have failed to submit, and DOC is putting together recommendations for civil penalties.