Total Spending Declined Between 2010-11 and 2012-13 . . . Over the past decade, total expenditures on judicial criminal justice programs has varied. As shown in Figure 1, criminal justice spending declined between 2010-11 and 2012-13, primarily due to two factors. First, in 2011 the state realigned various criminal justice responsibilities to the counties, including the responsibility for certain low-level felony offenders. This realignment reduced state correctional spending. Second, the judicial branch—particularly the trial courts—received significant one-time and ongoing General Fund reductions. 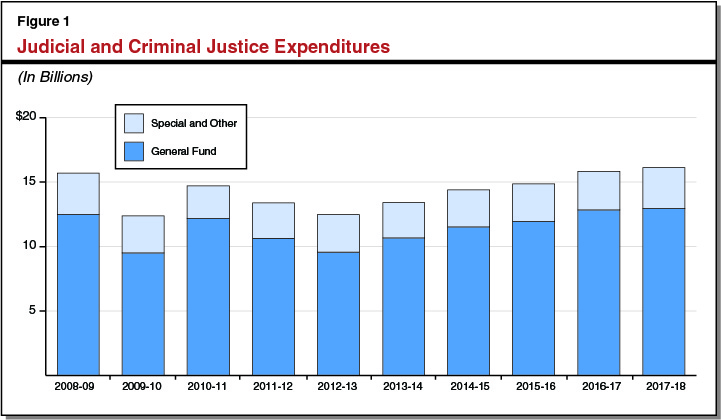 . . . But Has Increased Since Then. Since 2012-13, overall spending on criminal justice programs has increased. This was largely due to additional funding for CDCR and the trial courts. For example, increased CDCR expenditures resulted from (1) increases in employee compensation costs, (2) the activation of a new health care facility, and (3) costs associated with increasing capacity to reduce prison overcrowding. During this same time period, General Fund augmentations were provided to the trial courts to partially offset reductions made in prior years.

Major Budget Proposals. The most significant new criminal justice spending included in the Governor’s budget is a proposal to shift responsibility for the provision of inpatient psychiatric services at three state prisons from the Department of State Hospitals (DSH) to CDCR. The Governor’s budget transfers $250 million in General Fund support from DSH to CDCR to support this shift in responsibility. (We note that because DSH is not considered a criminal justice program, the corresponding $250 million reduction to the department’s budget is not depicted in Figure 1 or 2.) In addition, the budget includes various smaller augmentations for other departments. For example, the Governor’s budget includes $45 million associated with Proposition 56 (2016) for DOJ to enforce tobacco related laws and for grants to local law enforcement for efforts to reduce sales of tobacco products to minors. These augmentations are proposed to be offset by decreases in some department’s budgets. For example, the budget for the Board of State and Community Corrections is proposed to decline by $101 million in 2017-18 largely due to the expiration of various limited term grant programs.