Volatility of the Personal Income Tax Base

This brief provides some perspectives on the volatility of California’s personal income tax (PIT) base.

California’s Income Tax Base Much More Volatile Than Statewide “Personal Income.” Personal income is a widely used measure of the size of California’s economy, as reported quarterly by the U.S. Bureau of Economic Analysis (BEA). From 1990 to 2014, California personal income grew fairly consistently, with only a limited degree of volatility. On the other hand, the state’s PIT tax base was much more volatile than personal income. This is because (1) some of the more stable pieces of personal income are not taxed under California’s PIT and (2) the PIT tax base includes capital gains (gains on sales of stock, bonds, certain homes, and other assets), which are extremely volatile from year to year and are not counted by BEA in personal income. In an effort to protect the state budget from some of the volatility of capital gains, California has adopted a constitutional provision requiring PIT deposits into a state rainy‑day fund in years when capital gains are plentiful.

This Brief Discusses Part of the Picture . . . Not the Whole Picture. This brief examines the volatility of the PIT tax base—one important element of the PIT’s overall volatility—but this does not provide the whole picture. Specifically, this brief does not consider how the state’s progressive PIT rate structure (in which high‑income Californians pay a bigger fraction of their income than lower‑ and middle‑income Californians), deductions, exemptions, and credits affect the volatility of PIT revenues paid to the state. We anticipate discussing the volatility resulting from some of these other choices—choices the state has made about how to tax its PIT tax base—in future analyses.

In this brief, we provide perspectives on the volatility of California’s personal income tax (PIT) base. The PIT is state government’s most important revenue source, making up about two thirds of the state General Fund. This fund supports schools, universities, major health and social services programs, prisons, and other state‑funded programs. In this brief, we compare the PIT tax base to personal income, a broad measure of the state’s economy produced by the U.S. Bureau of Economic Analysis (BEA), and examine how these two factors change from year to year (that is, the volatility of both PIT and BEA’s personal income measure). Specifically, this brief discusses:

Part of the Picture . . . Not the Whole Picture. This brief examines the volatility of the PIT tax base. This is one important element of the PIT’s overall volatility, but does not provide the whole picture. In particular, since the state’s PIT structure is progressive (meaning that higher‑income people pay a bigger fraction of their income in income taxes than lower‑income people do), some elements of this PIT base are effectively taxed at higher rates than other elements. This brief does not consider directly how tax rate progressivity, deductions, exemptions, or credits affect volatility of PIT revenues paid to the state. We anticipate discussing the volatility resulting from some of these other choices—choices the state has made about how to tax its PIT tax base—in future analyses. 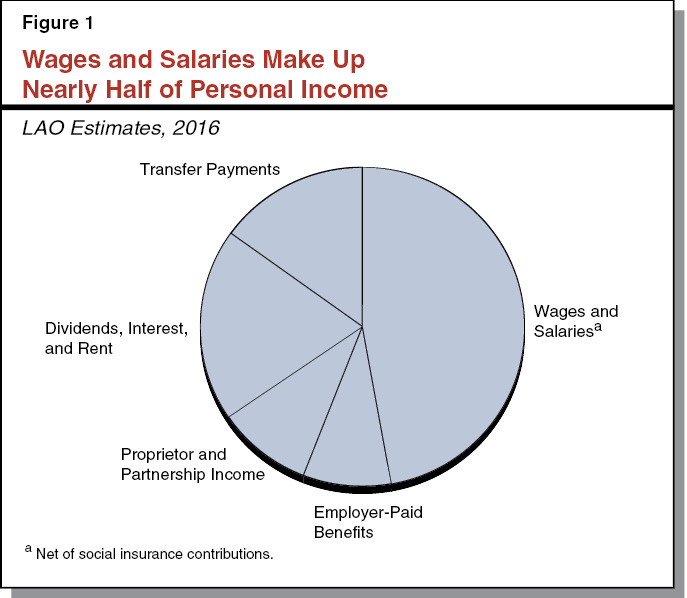 Wages and Salaries. BEA measures wages and salaries before deductions (such as payroll taxes and employees’ 401[k] contributions). Wages and salaries include commissions, tips, bonuses, and gains from exercising stock options.

Dividends, Interest, and Rent. BEA’s personal income measure includes cash payments of dividends, interest, and rent. It also includes two categories of income—called imputed rent and imputed interest—that do not directly give people more cash to spend. Imputed rent is the estimated amount that homeowners would have to spend if, instead of owning, they rented their own homes. The idea of imputed rent is that not having to pay rent effectively gives homeowners more income. Imputed interest includes investment income earned on insurance policies, the value of implicit services provided by banks and other lenders, and interest earned on employee pension plans.

Proprietors’ and Partnership Income. This category in the BEA personal income measure refers to the net business income from proprietorships (typically small businesses with a single owner) and partnerships (a form of small business organization with multiple owners). Farm income typically accounts for about 5 percent of this category’s total in California.

Employer‑Paid Benefits. This includes the value of employer contributions to employee pension and insurance plans including health, life, workers’ compensation, and unemployment. (The employer portion of the payroll taxes for Social Security and Medicare is listed under “benefits” in BEA’s data tables but is omitted from tables in this brief because it has no net effect on personal income.)

The tax base used by California for its personal income tax is similar to the federal government’s, but is set in state law. Figure 2 summarizes the major components of the state’s PIT tax base as reported on federal and state tax forms. It shows that well over half of the base consists of wages and salaries. A comparison of Figure 1 and Figure 2 reveals some of the differences between BEA personal income and the state’s PIT tax base. In this section, we will describe some of these differences. In general, California chooses to tax most, but not all, elements of BEA personal income, and it also chooses to tax some types of income not included in the BEA personal income measure. 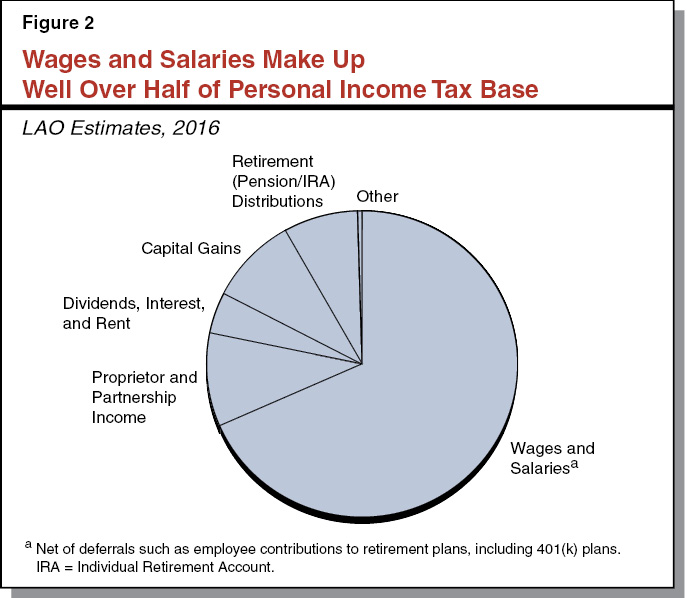 PIT Does Not Tax Some Elements of Personal Income. For each piece of personal income measured by BEA, the taxable component (that is, the part of personal income taxed by California’s PIT) is smaller than the total income in that category. There are various reasons for these differences:

PIT Taxes Some Dollars Not Included in BEA Personal Income. Two significant pieces of the PIT base—capital gains and retirement distributions—are not defined as being part of personal income. A capital gain is the difference between the selling price of an asset (stock, bond, building, etc.) and the asset’s original purchase price. Asset sales are not included in BEA’s estimates of personal income or output. Distributions from pensions and individual retirement accounts often are taxable in the year that they are withdrawn, but BEA has already counted them as personal income once when the initial contributions were made. In other words, in the year the withdrawals happen, this income is counted in the PIT base, but not in BEA personal income. 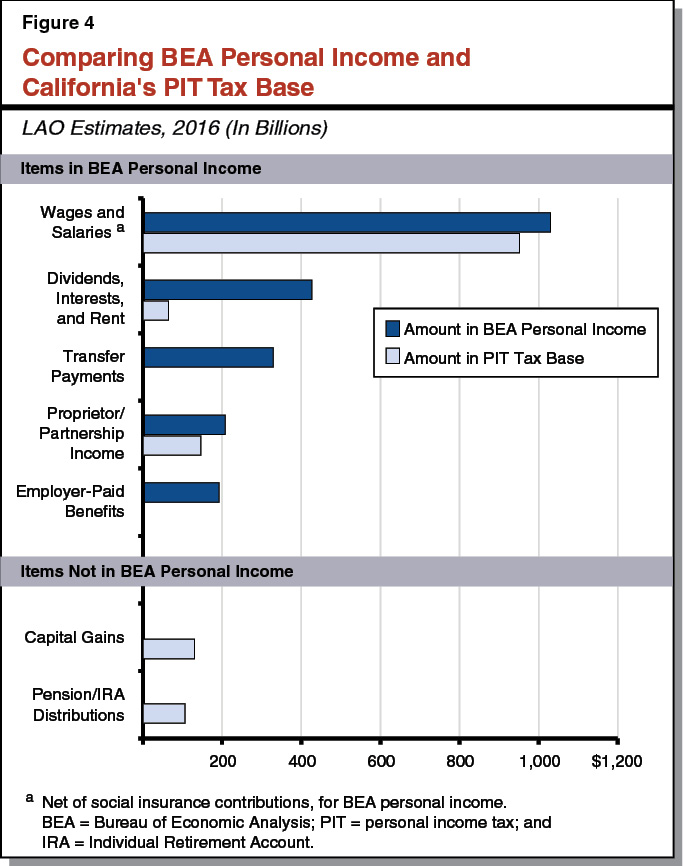 In assessing the state’s revenue situation, it is important to look at the year‑to‑year changes in various data series, such as personal income and the PIT base. When data show more variability in annual changes, they are said to be more volatile.

There are many ways to measure volatility. One such measure is AD. AD summarizes—for a given time period—how many percentage points the data deviate from the average annual compounded growth rate. 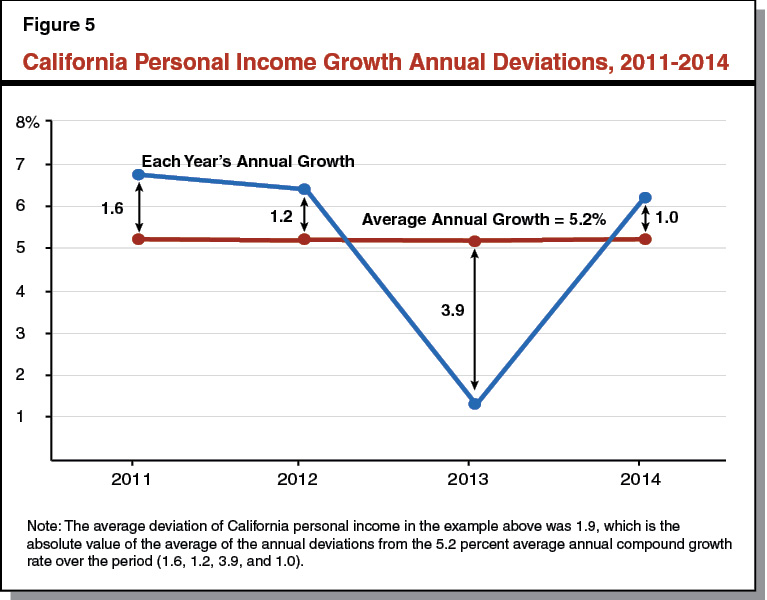 AD of Personal Income and PIT Tax Base

Figure 6 summarizes the AD of each major element of California’s personal income and PIT tax base over the period from 1990 to 2014. In this section, we discuss these measures of volatility.

BEA Personal Income Elements Not in PIT Tax Base. Figure 6 also shows that the AD for elements of the PIT base counted in BEA personal income is 4.0—almost twice the 2.3 AD of BEA personal income. There are two main reasons for the difference:

PIT Tax Base Almost Three Times More Volatile Than Personal Income. As noted above, the parts of the California PIT tax base that are in BEA’s personal income measure had a collective AD of 4.0 over the 1990 to 2014 period. The two components of the PIT tax base excluded from each year’s BEA personal income measure—capital gains and certain retirement distributions—have a combined AD of 18.5, but these two elements are relatively small parts of the PIT tax base. Overall, the entire California PIT tax base—the income taxed each year by the state from 1990 to 2014—had an AD of 6.3, or almost three times as volatile as BEA’s measure of personal income. This is a relatively volatile tax base, with both fairly stable elements (wages and salaries, with an AD of 3.4) and smaller, but very volatile, elements (capital gains, with an AD of 35.3).

Taking all PIT tax base elements together, the AD of the California PIT tax base fell somewhat from 6.5 during the 1990‑2002 period to 5.9 during the 2002‑2014 period. While capital gains became much more volatile, other elements—especially wages and salaries—became less volatile, more than making up for the increased volatility of stock and other asset gains. (As noted earlier, however, this is not the whole story about the volatility of California’s PIT, as these changes in the AD of the tax base over time do not account for changes in PIT policy, such as the approval of higher tax rates on the highest‑income earners under Proposition 30 [2012] and Proposition 55 [2016].)

Tax Choices Contribute to Volatility. California’s progressive tax rate structure and other tax policy choices contribute to the volatility of its PIT revenues, but a significant element of this tax’s volatility results from the volatility of the PIT tax base itself. This brief has focused on that tax base volatility. While state personal income, as measured by BEA, is not very volatile, California has made choices about what to include in its tax base and what to exclude. These choices make the PIT tax base more volatile than state personal income. In particular, including capital gains in the taxable PIT base adds significantly to the PIT base’s volatility.

State’s Management of Volatility. Over much of the last two decades, the state has debated how to manage its budgetary volatility. In 2014, the Legislature proposed and voters passed Proposition 2, a measure that sets aside revenues during good budget years in order to help stabilize the budget during bad budget years. Specifically, Proposition 2 captures a base amount of state revenues plus a portion of capital gains‑related PIT revenues during good budget years. Proposition 2 requires these revenues to be used to build budget reserves and make one‑time debt payments. This helps keep spending at more sustainable levels, as well as building reserves that can be used during bad budget times. While Proposition 2 did not change the state’s PIT tax base (or the volatility figures cited in this brief), this constitutional provision aims to reduce the volatility of state revenues available for spending by “taking money off the table” in good budget years when capital gains typically are elevated and by “putting more money on the table” in bad budget years by allowing for use of accumulated reserves in periods when capital gains often are depressed.

There’s More to the Volatility Story. The state’s chosen PIT tax base is relatively volatile. But this is not the whole story. The decisions the state makes about how to tax that base also affect tax revenue volatility. For example, the decision to tax high‑income Californians—who receive a disproportionate share of total capital gains and proprietor and partnership income—at higher marginal tax rates also affects the volatility of the state’s revenues. We anticipate discussing the volatility resulting from some of these other choices—choices the state has made about how to tax its PIT tax base—in future analyses.