At budget hearings on the Public Employment Relations Board (PERB), we recommend that the budget committees hear from PERB and affected employer and employee groups to understand (1) why PERB is not processing cases in a timely manner and (2) what actions are necessary for the department to meet legislative policy priorities.

This analysis builds on our March 1, 2016 analysis of the Governor’s two 2016-17 budget requests—one related to reducing case backlogs and another related to moving costs—for the Public Employment Relations Board (PERB). As we discuss in the 2016 analysis, PERB has had budgetary challenges as the agency’s workload has increased over the years without budgetary augmentations. In response to these challenges, PERB has relied on keeping various positions vacant—including vacant seats on the board—to redirect funds in the board’s budget. These vacancies—particularly in the Office of the General Counsel—have contributed to significant backlogs in resolving labor disputes at PERB. As we discussed in our 2016 analysis, PERB’s budget issues were further complicated after the Department of General Services (DGS) determined in 2015 that PERB would need to relocate its Los Angeles regional office (located in Glendale). This office is PERB’s busiest regional office, processing more than 50 percent of PERB cases each year.

2016-17 Budget Augmentation to PERB Budget. As part of the 2016-17 Budget Act, the Legislature approved (1) $885,000 ongoing to pay for staff costs to reduce existing case backlogs, (2) $100,000 one-time funding to move the Glendale office to a new location, (3) $117,000 ongoing to pay for increased rental costs, and (4) three positions. All of these were General Fund appropriations. The budget also included provisional language directing PERB to report to the Legislature on or before January 10, 2017 and May 14, 2017 on specific workload metrics. The goal of this reporting was to help the Legislature determine if PERB has sufficient resources to address the existing case backlog and resolve labor disputes in a timely manner. 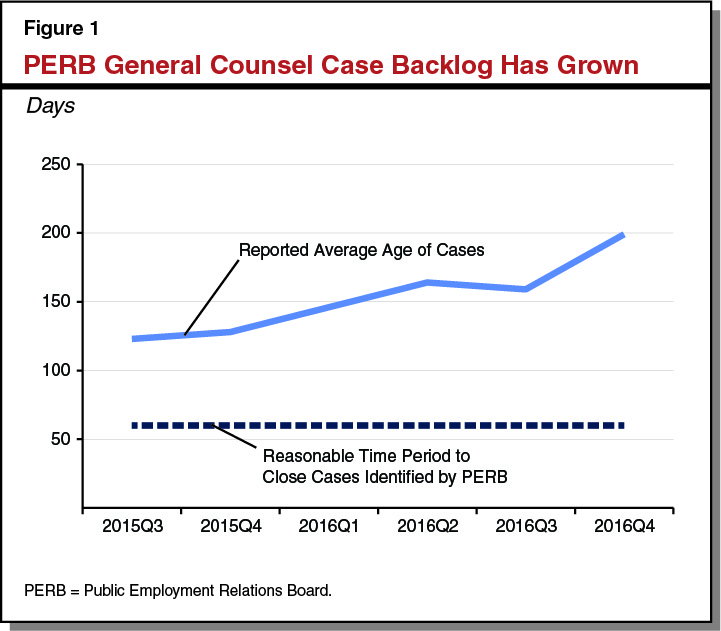 No Long-Term Lease Secured for Los Angeles Regional Office. The Department of General Services (DGS) has not been able to secure a lease for PERB to relocate its Los Angeles regional office—currently located in Glendale. The lease for the current facility ended February 2017. DGS was able to extend the lease at the current facility on a month month-to-month basis for one year. The terms of the lease extension increase PERB’s monthly rent costs for the facility by about $54 per month to a total monthly rent of $20,064 for the facility. It is not clear whether PERB will be able to move this office to a new facility before the end of 2016-17.

Two Vacant Board Seats. In order to take action on items, a quorum of three board members must be present at board meetings. For more than a year, two of the five seats on the board have been vacant. This creates a greater likelihood of the board not having a quorum at its meetings. For example, the board was not able to achieve a quorum at its December public board meeting because one board member was absent. We estimate that the three vacant positions associated with these board vacancies—the two board members and a shared support staff position—free up at least $500,000 (about 5 percent of the department’s budget) for PERB to spend on other staff and operating expenses. It is not clear the extent to which PERB relies on these freed up funds to pay for staff across the departments’ four divisions.

Administration Proposes No Changes to PERB Budget in 2017-18. The administration assumes that PERB will have 61 authorized positions—with about 10 (or 17 percent) of these positions being vacant—and a budget of $10.5 million.

The legislative branch has the role of reviewing the performance of a state department like PERB and determining the resources needed to meet desired policy priorities. In the 2016-17 Budget Act, the Legislature established as a goal that PERB be able to resolve labor disputes brought before it in a timely manner. In its January 2017 report to the Legislature, PERB identifies that its Office of the General Counsel should resolve cases within 60 days. With the current age of cases at the Office of the General Counsel being more than three times this goal, it is clear that PERB is not meeting the Legislature’s policy goals in this regard. What is not clear is whether the resources the Legislature provided as part of the 2016-17 budget are sufficient for PERB to achieve this goal. It is possible that there are additional efficiencies or other operational changes that could allow PERB to resolve labor disputes in a timely manner within its existing budgetary appropriation.

Key Questions for Budget Hearings. At budget hearings on this department, we recommend that the budget committees hear from PERB and affected employer and employee groups to understand (1) why PERB is not processing cases in a timely manner and (2) what actions are necessary for the department to meet legislative policy priorities. Key questions that legislators can ask these groups include: