For the past two years, urban water agencies in California have been submitting monthly data on residential water use to the State Water Resources Control Board (SWRCB). The monthly update covering December 2016 was recently published on the board’s website, providing a full year of data for 2016. This web post discusses trends in residential water use and what these data imply for policymakers in the coming year.

Residential Water Use Trends and Implications for Conservation Policy

For the past two years, urban water agencies in California have been submitting monthly data on residential water use to the State Water Resources Control Board (SWRCB). The monthly update covering December 2016 was recently published on the board’s website, providing a full year of data for 2016. This web post discusses trends in residential water use and what these data imply for policymakers in the coming year. 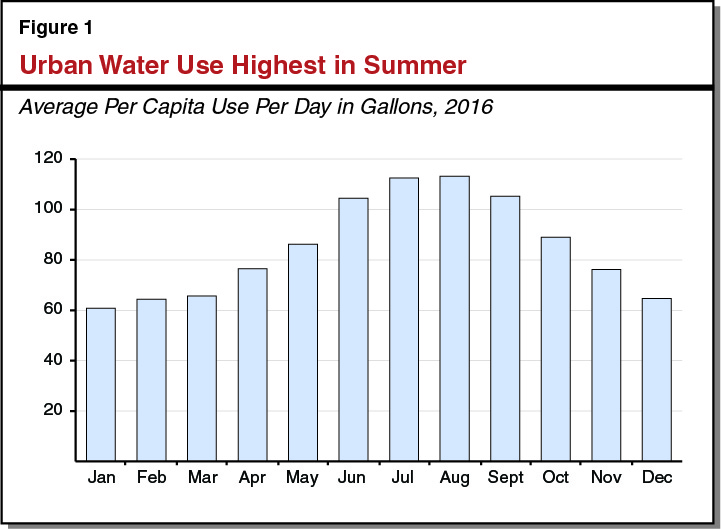 Water Use Higher in Last Half of 2016 Compared to 2015 . . . One notable trend highlighted in the data is the increase in per capita residential water use in the second half of 2016—particularly the summer months—compared to the same months in 2015. In the first four months of 2016, per capita water use was an average of 15 percent lower than the same months in 2015. However, as shown in Figure 2, in the summer months of 2016, per capita water use was an average of 11 percent higher than the same months the prior year. As discussed above, these months are when residential water use tends to be highest. A likely explanation for this shift is that in May 2016 the SWRCB eased mandatory water restrictions that had been in place for urban water agencies since June 2015. These restrictions were eased (and replaced with a self-certification process, which was recently extended) because of improved water conditions. More recently, over the final three months of 2016, residential water use was similar to the amounts used in the same months of 2015, probably due to significant precipitation in October and December. 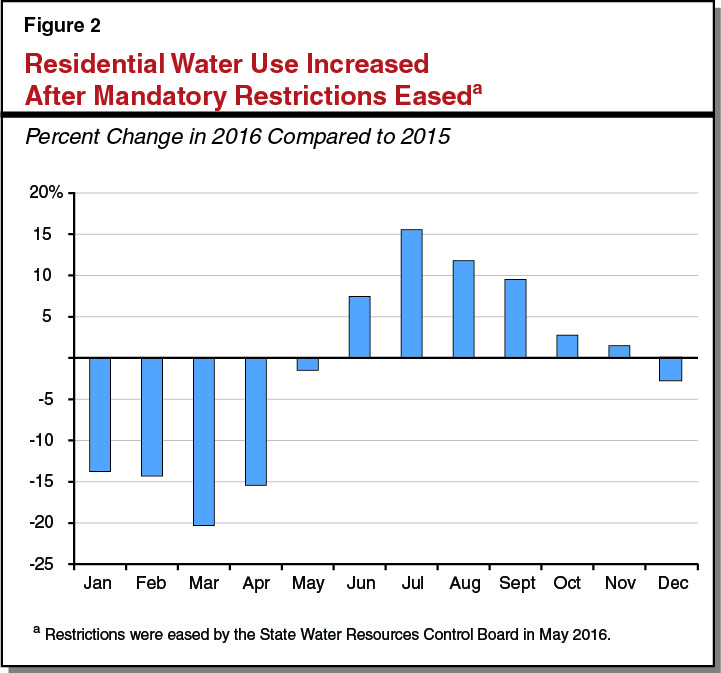 . . . But Significantly Below Usage in 2013 and 2014. Importantly, even though statewide use was higher in last year’s summer months compared to 2015, it was significantly lower than in prior years. For example, residential usage in the summer of months of 2016 was 30 percent lower than in the same months of 2013 and 13 percent lower than in the same months of 2014. The fact that summer usage was lower in 2016 than in those earlier years probably reflects several factors, including (1) the ongoing effects of permanent conservation efforts (such as turf replacements); (2) continuation of some local agencies’ conservation efforts (such as limiting the number of days people can water lawns); and (3) continuation of behavioral changes by Californians (such as taking shorter showers). Figure 3 shows statewide residential per capita water use by month for most of the past four years. (Only partial year data is available for 2014.) 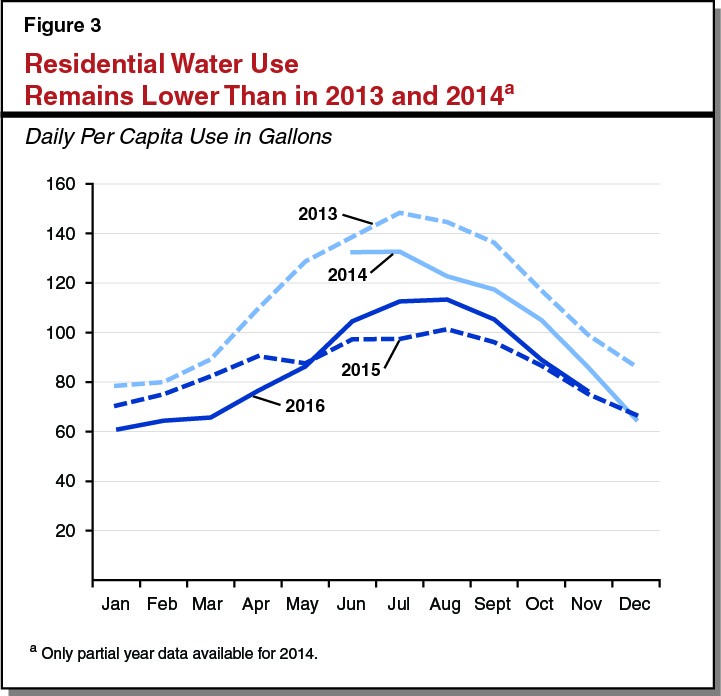 Use Varies Significantly Across State. California is divided into ten hydrologic regions. Historically, residential water use in these areas has varied, and this remained true in 2016. As shown in Figure 4, average residential water use in 2016 ranged from a low of 64 gallons per day in the San Francisco Bay region to 147 gallons per day in the Colorado River region. 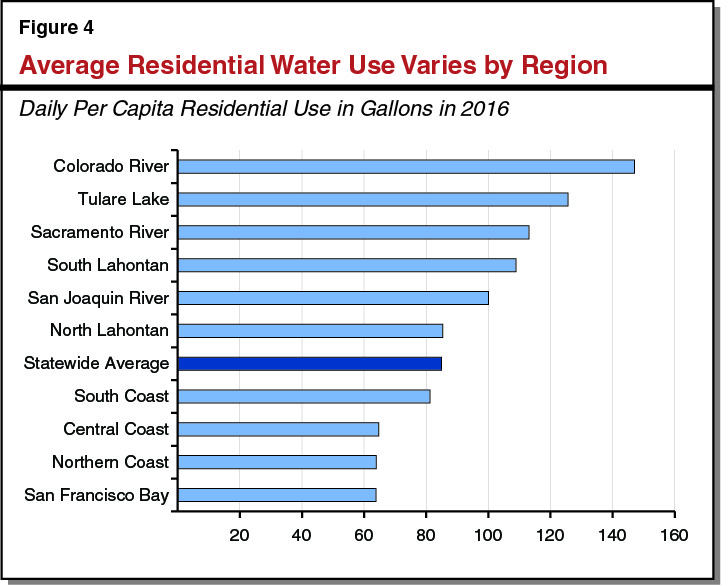 Importantly, all ten regions saw increases in residential water use since SWRCB lifted the mandatory restrictions, but the amount of increase has varied by region. In particular, the Colorado River, Sacramento River, North Lahontan, and Tulare Lake regions all saw per capita water use increase by at least 15 percent during 2016’s summer months compared to the same months in 2015. (We note, however, that the Sacramento River and North Lahontan regions saw use reductions in the fall of 2016 compared to the same months in 2015.)

Precipitation Data Suggests 2017 Will Be a Very Good Water Year for California. Fortunately, recent data suggest that the 2017 water year (October 2016 through September 2017) is very likely to be significantly better than recent years. Precipitation has been far above average throughout much of the state. As of mid-February 2017, many of the state’s largest reservoirs were filled well above historical averages for this time of the year. In addition, snowpack measurements in early March 2017 found that average snowpack in the state was 185 percent of historical averages for that time of the year.

Drought Resiliency Likely to Still Be Part of Policy Conversation. Despite these positive signs for 2017, there are several reasons why it will be important for policymakers and program managers to continue to monitor conditions and discuss what, if any, conservation and other measures should be implemented to protect the state’s water supplies for urban, agricultural, and environmental uses. First, as of the beginning of 2017, there continue to be some areas of the state that face ongoing negative effects that have accumulated due to multiple years of low precipitation. This includes dry and contaminated wells that reduce people’s access to clean drinking water, as well as irreversible land subsidence caused by overdrafting of groundwater during the drought. Second, it will be important to assess the short- and longer-term effectiveness of water conservation and other activities on water use patterns by residential—as well as agricultural—users. While drought conditions have been mostly alleviated in 2017, such data would be valuable in helping the state respond to the next drought. Third, it will be important to track the health of sensitive ecosystems and species. In recent years, for example, the drought has negatively impacted endangered fish species and contributed to increased tree mortality throughout the state. In many cases, it is too early to tell how quickly affected habitats and species will recover following multiple years of drought.

In November 2016, the administration released a draft report identifying additional steps it recommends taking to increase long-term conservation efforts around the state. These include a range of proposed actions that could require new legislation, additional funding, and coordination of state and local agencies. The administration believes that these actions would increase the state’s resilience and ability to respond to droughts in the future. More recently, the Governor’s 2017-18 budget proposed an additional $178 million in one-time funding for resources and other agencies—primarily from the General Fund—for continued drought-response activities. As we discuss in our review of the Governor’s budget proposals for resources and environmental protection agencies, we recommend approving some of the requested funding—and consider providing some of it on an ongoing basis—to address current conditions and increase the state’s resilience in future droughts.