We reviewed the proposed memorandum of understanding (MOU) between the state and Bargaining Unit 16. This bargaining unit is represented by the Union of American Physicians and Dentists (UAPD) and consists of state employed physicians, dentists, and podiatrists. This analysis fulfills our requirement under Section 19829.5 of the Government Code.

On March 3, 2017, the administration submitted a proposed agreement between the state and Bargaining Unit 16. This bargaining unit is represented by the Union of American Physicians and Dentists (UAPD) and consists of about 1,600 state employed physicians, dentists, and podiatrists. This analysis fulfills our requirement under Section 19829.5 of the Government Code. More information about this and other bargaining units and proposed agreements is available at our website. The administration has posted this agreement and summaries of the agreement and the administration’s fiscal estimates on its website.

If approved by the Legislature and affected employees, this agreement would direct Unit 16 state employee compensation policies and costs through 2019-20. The timing of this agreement, along with the agreements with 14 other bargaining units pending legislative approval (see our analyses of these other agreements here and here), gives the Legislature the opportunity to consider the administration’s employee compensation proposals for a majority of the state workforce.

The proposed Unit 16 agreement includes changes to the state’s retiree health benefits that largely are similar to the plans the Governor proposed in six agreements the Legislature has ratified since 2015 and the 14 agreements pending ratification. If this and the 14 other pending agreements are ratified by the Legislature and affected employees, the state will have adopted a plan to address its large unfunded retiree health liabilities over the next few decades—through prefunding and reducing benefits for future employees—for much of the state workforce. These actions would lower state retiree health costs significantly over the long term. In order to reach these agreements, however, the Governor agreed to propose various pay and benefit increases for affected employees in the near term. These proposed pay and benefit increases—along with the state contributions to match employee payments to a retiree health funding account—would be a significant new budgetary commitment for the state with both near- and long-term effects on state obligations. 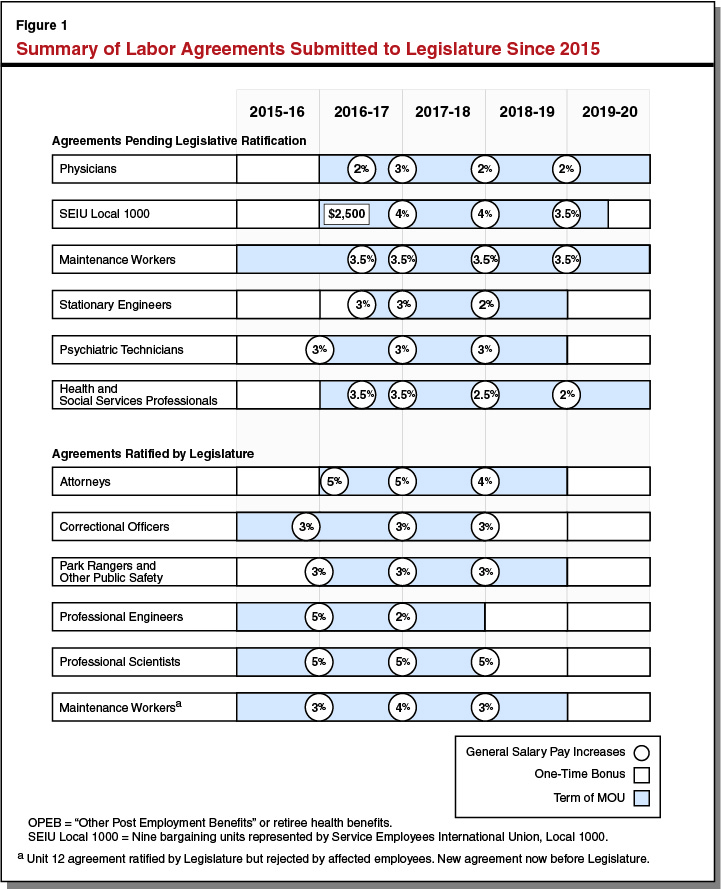 Special Salary Adjustments (SSAs) for Some. In addition to the GSIs described above, the agreement would provide about one-quarter of Unit 16 members special salary adjustments of specified percentages at specified dates. Over the course of the agreement, these SSAs increase most affected employees’ pay by between 11.5 percent and 13.7 percent after accounting for the GSIs. (Employees in the podiatrist [Correctional Facility] classification salary range would receive a larger pay increase to align with salary ranges of other podiatrist classifications. The administration indicates that this affects about one employee. In total, this employee would receive a 28.8 percent pay increase over the course of the agreement, after accounting for the GSIs and SSAs.) Like GSIs, these SSAs generally increase state costs for overtime and salary-driven benefits.

Travel and Business Reimbursements. State employees are reimbursed for specified costs incurred while traveling and doing business for the state. The agreement adjusts the amount of money Unit 16 members may be reimbursed for these activities. The proposed reimbursement rates seem consistent with the administration’s reimbursement policies.

End Dependent Vesting Period. The current Unit 16 MOU requires a new employee to work with the state for two years before receiving the state’s full contribution towards health coverage for the employee’s enrolled dependents. Specifically, the share of the state’s contribution to dependent health coverage increases over time so that the state pays (1) 50 percent of this benefit in the first year, (2) 75 percent of this benefit in the second year, and (3) the full benefit after the employee has worked two years with the state. The proposed agreement eliminates this vesting period so that the state pays the full contribution towards health coverage of new hires’ enrolled dependents. The administration assumes that departments will not receive augmentations to their budget to pay for these increased costs.

Current Benefits and Funding. Until recently, like most governments in the U.S., the state did not fund health and dental benefits for its retirees during their working careers in state government. This has resulted in large unfunded state liabilities for the benefits. The state now pays for retiree health and dental benefits on an expensive “pay-as-you-go” basis. This means that later generations pay for benefits of past public employees. Although the state has not made contributions to prefund Unit 16 retiree health or dental benefits, Unit 16 employees have contributed 0.5 percent of their base pay to prefund these benefits since July 2013.

Proposed Funding Changes. The agreement institutes a new arrangement to address unfunded retiree health benefits for Unit 16 members. While the administration’s plan seems to be to keep making pay-as-you-go benefit payments for many years, the new arrangement would require state and employee contributions towards the “normal costs” each year for the future retiree health benefits earned by today’s workers. The agreement establishes a “goal” that employees and the state each regularly contribute half of the normal costs by July 1, 2018. Specifically, the agreement requires the state and employees to contribute 1 percent of pay effective July 1, 2017 and 1.4 percent of pay effective July 1, 2018. The agreement deposits these payments into a dedicated account in an invested trust fund managed by CalPERS. This account would generate earnings and gradually reduce unfunded liabilities over the next three decades or so.

New Budgetary Commitment. As Figure 2 shows, the administration estimates that this agreement would increase annual state costs by $90 million by 2019-20. Most of these costs would be paid from the state’s General Fund. The administration assumes that departments will pay for about one-quarter of these costs from existing departmental resources without the need of additional appropriations. We think the actual annual costs of this agreement will be a few million dollars higher than the administration estimates by 2019-20. In particular, the administration’s estimates do not take into consideration the effect (1) of CalPERS lowering the discount rate used to determine state contributions to the pension system, increasing state contributions significantly over the next several years or (2) the proposed increases to employee base pay will have on overtime payments.

Agreement Could Be in Effect During Next Economic Downturn. The state has a revenue structure that depends on many volatile and unpredictable economic conditions, including fluctuations in the stock market. The U.S. economy currently is in one of the longest periods of economic expansion in the country’s history. It is difficult to predict with any level of certainty the timing, duration, or severity of the next economic downturn. However, it is reasonable to suggest that the next downturn could occur within the next few years. This agreement provides pay increases and other provisions that increase state costs through 2019-20. Employees will expect to receive the pay increases provided by the agreement, regardless of the condition of state revenues during the terms of the agreement. While the Legislature has the authority to set employee compensation to any level in any budget year, this agreement will make any action in response to fiscal constraints to reduce Unit 16 employee compensation below what is provided by the agreement very difficult.

New CalPERS Discount Rate Will Increase Pension Contributions . . . CalPERS pensions are funded from three sources: investment gains, employer contributions, and employee contributions. CalPERS reports that about two-thirds of benefit payments are paid from past investment gains. CalPERS expects investment returns over the next decade to be lower than past returns. At its December 2016 meeting, the CalPERS board voted to change a key assumption used in calculating how much money employers and employees must contribute to the pension system each year. Specifically, the board voted to lower the discount rate from 7.5 percent to 7.0 percent over the next three years. This lower discount rate means that CalPERS calculations of plan assets and liabilities will assume investments will have lower returns. By assuming less money comes into the system through investment gains, the state will be required to contribute more money to pay for higher normal costs and a larger unfunded liability.

Current Law Establishes Standard that Employees Pay One-Half of Normal Costs. The California Public Employees’ Pension Reform Act (PEPRA) of 2013 created a standard that all state employees pay one-half of normal costs for their pension benefits. Contribution levels for state employees are established in labor agreements and statute. Today, the contributions paid by most state employees meet this standard.

Employee Contributions to Pensions May Increase During Term of Agreement. CalPERS estimates that the lower discount rate will increase the normal costs for both Safety and Miscellaneous plans by more than 2 percent of pay by 2019-20. Based on these estimates and the provisions established under this agreement, it seems likely that Unit 16 members earning Safety pensions will pay more towards their pensions by the end of the contract period. To the extent that increased pension costs resulting from the lower discount rate are shared with employees, the state’s increased annual costs resulting from this assumption change would be somewhat lower than otherwise would be the case in the absence of this provision—perhaps by millions of dollars.