Overview of the 2017 Transportation
Funding Package

The state’s transportation system helps to move people and goods around and through the state. State funding primarily supports three segments:

This section consists of three parts. First, we describe the funding package’s revenues. Second, we describe its spending provisions. Lastly, we discuss accountability and other measures contained in the legislation.

Figure 1 shows the tax and fee rate increases established by SB 1. The legislation increases both gasoline and diesel taxes, while also creating new vehicle taxes and fees to fund transportation. Figure 2 shows the share of revenues from each tax and fee increase. (Because the tax and fee rate increases are phased in over the next several years, the associated revenue increases cited here and throughout the remainder of this report reflect the administration’s estimated annual average increase over the next decade.) As shown, the gasoline excise tax increases and the new Transportation Improvement Fee are the two largest revenue sources. Altogether, the administration projects ongoing revenues to increase by $5.2 billion annually. Currently, state funding for transportation from these and other revenue sources (such as truck weight fees and cap and trade auction revenues) total about $7.5 billion annually. Below, we provide more detail on each revenue increase. 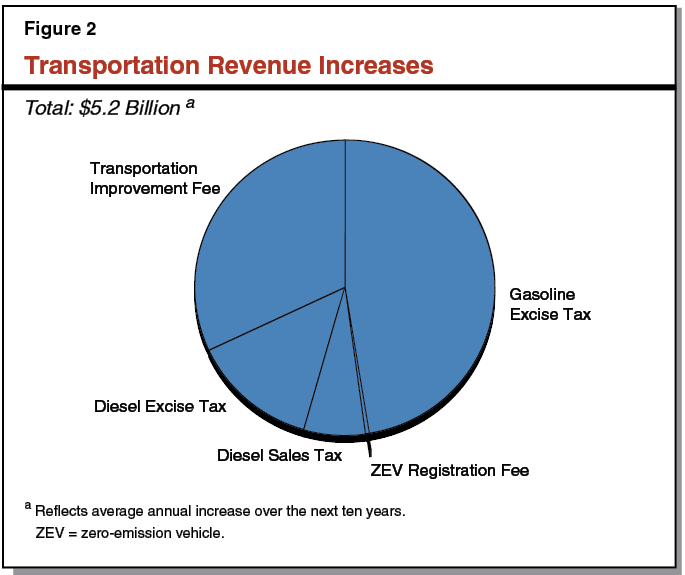 Gasoline Taxes ($2.5 Billion). The state currently has two excise taxes on each gallon of gasoline: a base tax and a variable “swap” tax. (We note that there is also a federal excise tax of 18.4 cents per gallon.)

Diesel Taxes ($1.1 Billion). The state currently collects revenue from excise and sales taxes on diesel fuel. (We note that there is also a federal excise tax of 24.4 cents per gallon.)

As shown in Figure 4, SB 1 creates a series of formulas to distribute the revenues from the new taxes and fees to different transportation programs and purposes. In most cases, the formulas split the revenues based on percentages, but in some cases the legislation sets aside fixed dollar amounts for certain programs. (Revenues from the inflation adjustments imposed by SB1 on existing taxes are distributed according to existing statutory formulas.) Figure 5 shows how much ends up being spent by each type of program. As shown, the largest spending increases are for state highways and local streets and roads. Below, we describe the specific transportation programs that receive the new revenues. (Additionally, as we discuss in the box below, a proposed constitutional amendment would add to existing restrictions on the use of transportation revenues.) 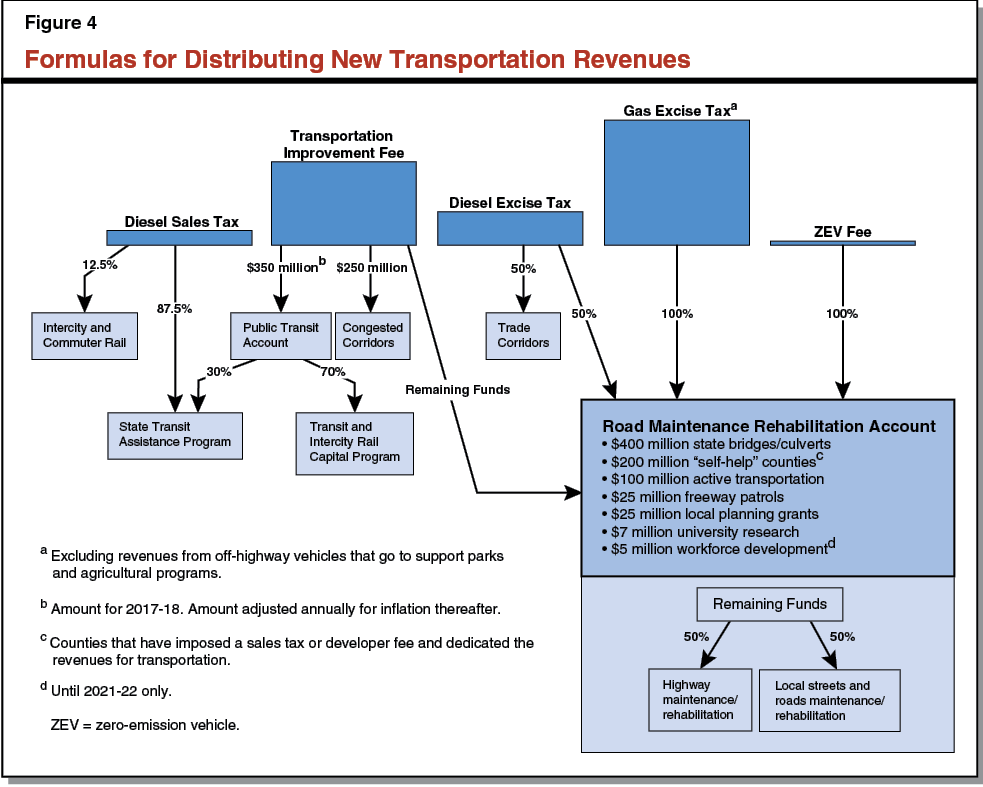 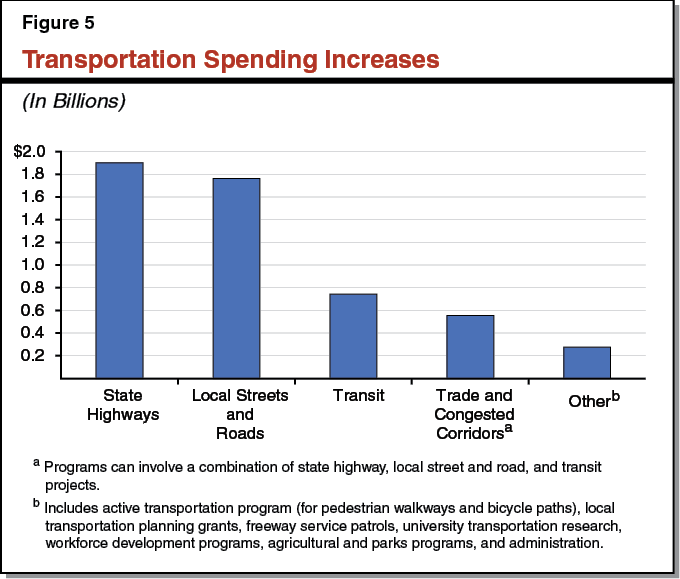 The funding package includes about $1.8 billion annually specifically for local streets and roads. This includes funding for:

The funding package includes a total of about $560 million annually for two new programs to improve trade corridors and congested corridors. These programs, which can support state highways, local streets and roads, or transit, include:

The funding package includes about $270 million annually for various other programs, including:

Includes Accountability and Other Provisions

The transportation funding package includes several other provisions beyond raising and spending new revenues. Most of these provisions concern oversight of the new funding as well as certain aspects of Caltrans’ operations. Below, we summarize each provision.

Expects Caltrans to Operate More Efficiently. Senate Bill 1 requires Caltrans to implement unspecified efficiency measures with the goal of generating at least $100 million annually in savings to redirect toward maintaining and rehabilitating state highways. Caltrans is to report on these savings to the CTC.

Creates New Independent Office of Audits and Investigations for Caltrans. This new office is responsible for ensuring Caltrans and its contractors (including local agencies) spend funding efficiently, economically, and in compliance with state and federal requirements. The office is to report its findings annually to the Governor and the Legislature. The Governor is to appoint an Inspector General to oversee the office, subject to Senate confirmation, for a six‑year term.

Modifies Approval Process for Caltrans’ Biannual Proposal of Rehabilitation Projects. Currently, the CTC reviews and approves Caltrans’ proposed plan for rehabilitation projects every other year. The funding package alters the current approval process in a few ways, such as by requiring (1) CTC to allocate funds for capital outlay support for each project phase and (2) Caltrans to receive the commission’s approval for changes to a programmed project or increases in capital or support costs (above a certain threshold).

Establishes Requirements for Local Governments to Receive Funding. To be eligible to receive SB 1 funding for streets and roads maintenance and rehabilitation, the legislation requires cities and counties to spend at least as much on transportation from their unrestricted funds as they spent from 2009‑10 through 2011‑12, on average. The State Controller’s Office is authorized to perform audits to ensure compliance. Additionally, cities and counties must submit to the CTC a list of proposed projects approved by the city council or county board of supervisors.

Other Provisions. Other major provisions in the legislation (1) create an Advance Mitigation Program at Caltrans to protect natural resources and accelerate project delivery, (2) require Caltrans to create a plan to increase contracts awarded to certain groups (such as small businesses), (3) require Caltrans to incorporate the “complete streets” design concept into its highway design manual, (4) require the Department of Motor Vehicles to confirm certain trucks are in compliance with state air pollution standards as a condition of registration starting in 2020, and (5) prohibit state and local regulations requiring a truck to meet stricter air pollution standards for up to 18 years after it is first certified for use.

While SB 1 included specific funding allocations to individual programs, it left some implementation details up to future legislative and administration actions. On May 11, 2017, the Governor released his May Revision budget proposal for 2017‑18, which addresses some implementation issues. We discuss these issues below. Additionally, we discuss at the end overarching issues for the Legislature to consider regarding oversight and accountability.

Establishing Program Guidelines. Most of the programs funded through SB 1 already are in existence. The legislation, however, creates a few new programs, such as one for commuter and intercity rail and another for trade corridors. CTC and the California State Transportation Agency are tasked with developing guidelines for the new programs. Nonetheless, the Legislature could consider specifying in statute certain program requirements. In his May Revision, for example, the Governor proposes trailer bill language for the trade corridor program that establishes various program requirements, such as for 60 percent of funds to support projects nominated by local and regional agencies and 40 percent for projects nominated by Caltrans.

Increasing Efficiency at Caltrans. As described earlier, SB 1 includes several measures to increase efficiency at Caltrans, such as by creating a new Inspector General to find ways to improve the department’s operations and by setting an expectation for Caltrans to achieve efficiency savings. As part of his May Revision, the Governor proposed an initial staffing plan for the Inspector General’s office but certain key questions remain unanswered, such as how the Inspector General would select audits and investigations to perform. Additionally, the administration did not present a plan for Caltrans to operate more efficiently and achieve the expected $100 million in savings (though its spending plan documents reflect the savings). One way our office in the past has recommended having Caltrans operate more efficiently is by reducing its capital outlay support staff relative to the volume of capital projects the department delivers. The Governor’s May Revision takes a step in this direction by reducing capital outlay support staff, but it also leaves open the possibility for staffing augmentations in 2017‑18 after the enactment of the budget.

Ensuring Oversight and Accountability. Though SB 1 establishes various long‑term performance outcome measures for highway conditions, the legislation does not include specific mechanisms for holding the administration accountable for achieving these outcomes nor does it set interim benchmarks against which to measure the administration’s progress in the near term. To improve its oversight of the new funding, we encourage the Legislature to begin now considering how to hold the administration accountable in the near term. For instance, the Legislature could establish in state law interim outcome measures against which to measure the administration’s progress in achieving the longer‑term outcomes contained in SB 1. It also could consider consequences should the administration not achieve these interim outcome measures. For instance, the Legislature could consider reprioritizing funding across programs (such as from rehabilitation to maintenance) or enacting organizational or governance changes to state transportation agencies to improve their effectiveness (such as by further strengthening the authority of CTC to oversee Caltrans’ rehabilitation projects by authorizing the commission to approve or reject individual projects, rather than an entire program of projects).