Medi-Cal, the state’s Medicaid program, provides health care coverage to over 13 million of the state’s low-income residents. Medi-Cal costs are generally shared between the federal and state governments. In this post, we describe the major factors that we project will impact changes in General Fund Medi-Cal spending over the outlook period, which extends from 2017‑18 through 2021‑22. We also provide an in-depth discussion of a number of key assumptions that we made in our spending projections. With one major exception—reauthorization of the Children’s Health Insurance Program (CHIP)—we base our projections on current federal and state law. As such, this outlook assumes no changes to federal Medicaid law or to the Patient Protection and Affordable Care Act (ACA) other than those related to CHIP reauthorization.

Medi-Cal Expenditures Projected to Be Substantially Higher in 2018‑19. We project that Medi-Cal General Fund spending will be $21.1 billion in 2018‑19, a nearly 12 percent increase over our revised estimate of 2017‑18 spending. The two most significant drivers of higher Medi-Cal spending in 2018‑19 compared to 2017‑18 are (1) growth in the underlying cost of the Medi-Cal program—such as modestly higher caseload and more significant increases in per-enrollee costs—and (2) a substantial reduction in the amount of Proposition 56 funding that would be available to offset General Fund spending in Medi-Cal (based on an assumption discussed below). 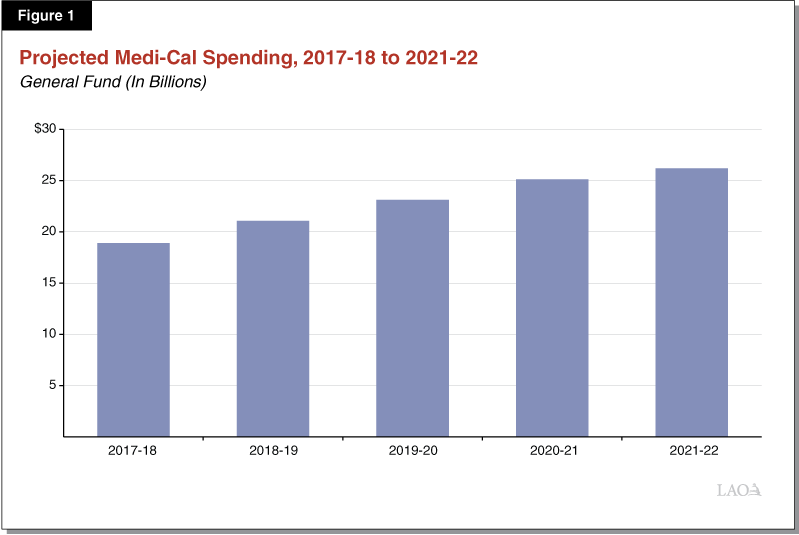 The underlying sources of year-over-year growth in Medi-Cal spending are changes in caseload and per-enrollee costs. We discuss our estimates for both of these factors below.

Project Relatively Modest Caseload Growth . . . While Medi-Cal enrollment has risen significantly in recent years (primarily because of coverage expansions related to the ACA), recent enrollment counts suggest that growth in the Medi-Cal caseload may be slowing. We therefore assume that overall Medi-Cal enrollment will increase by less than 1 percent in 2018‑19, translating into roughly 50,000 additional enrollees. Changes in caseload in later years are highly uncertain. For our economic growth outlook scenario, we assume that overall Medi-Cal enrollment will have modest growth of about 1 percent annually through 2021‑22.

. . . And Moderate Growth in Per-Enrollee Costs. Per-enrollee costs in Medi-Cal are driven by growth in service utilization and the health care prices paid by the program in managed care and fee-for-service (FFS). Based on recent trends, we project that per-enrollee costs will grow by about 4 percent in 2018‑19 and about 3 percent annually thereafter through 2021‑22. These projections are subject to considerable uncertainty, particularly if future changes in managed care capitated rates or FFS costs differ substantially from recent historical trends.

Taken Together, Underlying Factors Account for Significant Portion of Higher Medi-Cal Spending. Taking growth in caseload and per-enrollee costs together, we estimate underlying General Fund expenditure growth in Medi-Cal of about $950 million in 2018‑19, with underlying expenditures growing by an additional roughly $1 billion each year through 2021‑22.

Under current law, the state’s minimum wage is scheduled to increase to $11 per hour in January 2018, with additional planned increases of $1 annually until the minimum wage reaches $15 per hour in January 2022. We estimate that the higher minimum wage will result in net savings in Medi-Cal, primarily as the minimum wage increases result in some enrollees having higher incomes that make them ineligible for the program. (Many of these individuals, however, would likely become eligible for federal subsidies to purchase commercial health insurance through the state’s Health Benefit Exchange, Covered California.) We estimate that net savings in Medi-Cal from the increasing minimum wage could reach the hundreds of millions of dollars annually by 2021‑22. 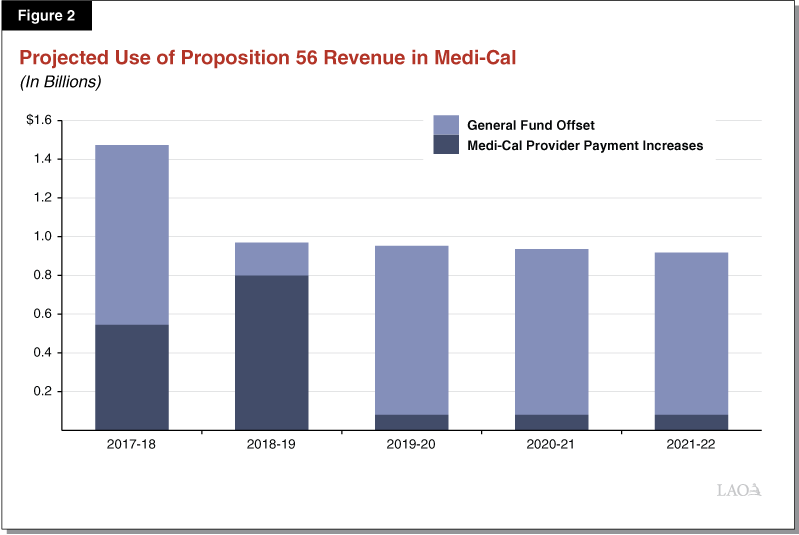 Proposition 55 (2016), which extended tax rate increases on high-income earners, gave the Director of Finance significant discretion to determine the amount of revenues from the measure to dedicate to Medi-Cal. Our outlook assumes no additional spending on Medi-Cal associated with the measure. If the administration makes different decisions regarding these revenues, Medi-Cal spending could be higher by up to $2 billion annually beginning in 2018-19.

Current MCO Tax. The current MCO tax is assessed on a large number of managed care plans in the state. Revenues from the MCO tax, which leverage federal funding for Medi-Cal, provide a substantial General Fund offset—an estimated $1.8 billion in 2017-18. The authorization of the MCO tax was also tied to a 7 percent service-hour restoration in In-Home Supportive Services (IHSS) at a General Fund cost of roughly $300 million in 2017-18. (For more information on the IHSS implications of the MCO tax, please see our IHSS supplemental online post.) The current MCO tax is authorized through July 1, 2019.

State Budget Implications. It is highly uncertain whether the federal government would provide its required approval of the current MCO tax structure if it were proposed to be continued beyond July 1, 2019. Therefore, we assume the General Fund offset from the current MCO tax will expire in 2019-20, increasing General Fund spending by $1.3 billion in 2019-20 and $1.8 billion in each of 2020-21 and 2021-22. (We assume lower General Fund spending in 2019-20, relative to 2020-21 and 2021-22, due to payment lags similar to those experienced with the previous MCO tax.) We would note that some of the increased General Fund spending due to the expiration of the MCO tax would be offset by assumed savings triggered by the elimination of the 7 percent service-hour restoration in IHSS.

Current Program Status. CHIP is a joint federal-state program—operated in California through Medi-Cal—that primarily provides health insurance coverage to children in low-income families with incomes too high to qualify to Medicaid. Federal authorization of CHIP funding expired on September 30, 2017. California is currently funding its CHIP program at the ACA-enhanced CHIP federal medical assistance percentage (FMAP)—or federal cost share—of 88 percent with a combination of unspent funds from the state’s previous CHIP allotment and funds redistributed from other states’ allotments to California. (Historically, prior to the ACA, the CHIP FMAP that applied in California was 65 percent.) The administration projects that the state will exhaust its CHIP funding by the end of 2017.

Outlook Assumes CHIP Reauthorization at Enhanced FMAP. The 2017-18 Budget Act assumed federal funding for CHIP would be reauthorized, but not at California’s ACA-enhanced CHIP FMAP of 88 percent. Instead, it assumed the state would receive its traditional CHIP FMAP of 65 percent, resulting in additional spending of $396 million General Fund in 2017-18 (relative to what it would have spent at the ACA-enhanced CHIP FMAP of 88 percent). Our outlook assumes that the federal proposal described above is enacted. Reauthorization of federal CHIP funding at the increased FMAP of 88 percent would reduce estimated General Fund Medi-Cal costs by $396 million in 2017-18 relative to what was assumed in the 2017-18 Budget Act. General Fund savings of a similar amount would also be reflected in the 2018-19 budget. Starting in 2019-20, however, a reduction of California’s CHIP FMAP from 88 percent to 76.5 percent would increase General Fund costs by $100 million to $200 million relative to prior years that had the ACA-enhanced FMAP. A return to California’s traditional CHIP FMAP of 65 percent in 2020-21 would further increase General Fund spending, for a total of almost $400 million in additional General Fund spending relative to prior years that had the ACA-enhanced FMAP. By 2021-22, estimated General Fund Medi-Cal costs for CHIP would be between $400 million and $500 million higher than in 2017-18.

Possible Federal Failure to Reauthorize CHIP. Without federal reauthorization of CHIP funding, the state would likely exhaust its remaining unspent federal funds for CHIP by the end of 2017. Under the ACA MOE requirement, which under current federal law continues until September 30, 2019, California would likely have to maintain its CHIP eligibility levels and receive its traditional Medicaid FMAP of 50 percent to cover these children. Relative to the CHIP FMAP of 65 percent assumed in the 2017-18 Budget Act, General Fund spending would increase $280 million in 2017-18 and almost $600 million in 2018-19, under the scenario where Congress has failed to reauthorize CHIP. Starting October 1, 2019, the state would no longer be required to cover these children and, therefore, would no longer receive a 50 percent FMAP for each beneficiary. If the state continued to cover CHIP-eligible children in Medi-Cal without federal funding, the state’s General Fund exposure would increase by about $2 billion in 2019-20. The state would, however, have the authority to eliminate CHIP and transition its beneficiaries to subsidized coverage through the state’s health benefit exchange, Covered California. This transition would eliminate any additional General Fund exposure in 2019-20.