Our recent Fiscal Outlook publication provided our short-term and longer-term outlook for the state budget. The Fiscal Outlook considers potential future requirements under Proposition 2 (2014)—including required rainy day fund deposits and payments toward certain state debts. Some have asked whether Proposition 2 debt funding payments can be used to reduce liabilities of teacher and other public employees' pension plans. As we discuss in this post, there may be little ongoing capacity to make additional commitments from Proposition 2 debt funding payments through the mid-2020s. The Legislature, however, could change the state’s existing Proposition 2 debt payment priorities (to prioritize different types of debt) or use non-Proposition 2 resources to pay down additional liabilities, such as pension debt.

True Up Provisions. Under Proposition 2’s “true up” provisions, the state reevaluates the estimate of Proposition 2 requirements twice: once in each two subsequent budgets. Under these reevaluations, the rainy day fund deposit is revised up (down) if capital gains taxes were higher (lower) than the state’s prior estimates. The state does not revisit its estimate of the base amount in the true up calculation. Debt payments are also not adjusted when new capital gains estimates are available later.

While there is no overarching statutory plan for future Proposition 2 debt payments, the Legislature and Governor have agreed—in some cases, informally, and, in a few cases, in state law—to prioritize certain debts that involve multiyear commitments. This section describes these agreements and the commitments now being funded by Proposition 2 debt payments. (A more detailed list of Proposition 2 eligible debts and recent uses of funding is available on page 4 of this budget brief and page 2 of the administration’s multiyear projections.)

Prefunding Retiree Health Benefits. The Legislature and Governor have agreed to implement the state’s plan to address retiree health benefit liabilities with (1) employer (state) and employee contributions to prefund these benefits and (2) a reduction in the benefits earned by future employees. Through the collective bargaining process, the state has implemented this plan for most state employees. Consistent with actions in the last two budget packages, the Legislature and Governor have agreed to use Proposition 2 debt payments to pay the employer costs of prefunding these benefits.

Transportation-Related Special Fund Loans. As one of the many actions taken in the 2000s to address its budget problems, the state loaned amounts to the General Fund from other state accounts known as special funds. These funds included certain transportation-related accounts. Current state law provides for the repayment of transportation-related loans over the next few years. The Legislature and Governor have agreed to use Proposition 2 debt payments to repay these loans and, in the case of one major loan, this agreement is reflected in statute.

Repaying CalPERS Borrowing Plan. In the 2017‑18 budget package, the Legislature approved a plan to make a $6 billion supplemental payment to CalPERS using a loan from the Pooled Money Investment Account. The administration has proposed using Proposition 2 debt payments to repay the General Fund’s share of the principal and interest on this loan (which the administration currently estimates is $3.4 billion). The Legislature approved this proposal for 2017‑18 and has not raised objections to the administration’s repayment plan. The administration’s apparent goal—stated in a September report to the Joint Legislative Budget Committee—is to maximize savings by paying off the CalPERS loan by the mid-2020s. Paying this loan faster is desirable as it would likely yield more savings over the lifetime of the loan.

Other Recent Uses of Debt Payments. Below, we describe three additional recent uses of Proposition 2 debt payments, which are either more flexible or are not expected to continue. They are:

No Added Debt Funding Requirements in 2017‑18. Our estimates of General Fund revenues and capital gains suggest the state underestimated 2017‑18 Proposition 2 requirements by $1.4 billion. Under the measure’s provisions, the state would need to make a true up deposit of that amount to the state’s rainy day fund. These estimates depend on our assumption that revenue collections in the current month (December) and in early 2018 (particularly January and April) will surge, consistent with strong stock market gains over the last year. When capital gains revenues are higher (or lower) than anticipated, the state adjusts reserve levels, but not debt payment amounts. As a result, these estimates do not result in higher debt payments in 2017‑18. (In general, if the budget consistently underestimates Proposition 2 requirements, it would result in more reserve deposits, and fewer debt payments, than more accurate projections would yield.)

Debt Funding in 2018‑19 and Later. Under our office’s revenue estimates in the Fiscal Outlook, we estimate debt funding will be $1.9 billion in 2018‑19. As shown in Figure 1, these estimates are higher than recent debt funding amounts. When the Governor’s budget is released in January, the administration will provide its own updated estimates of these amounts. Assuming employment and personal income continue to grow, but that the stock market remains mostly flat, Proposition 2 debt payment funding would be around $1.2 billion each year after 2018‑19. (Debt payments and reserve deposits are equal to one another in initial estimates.) 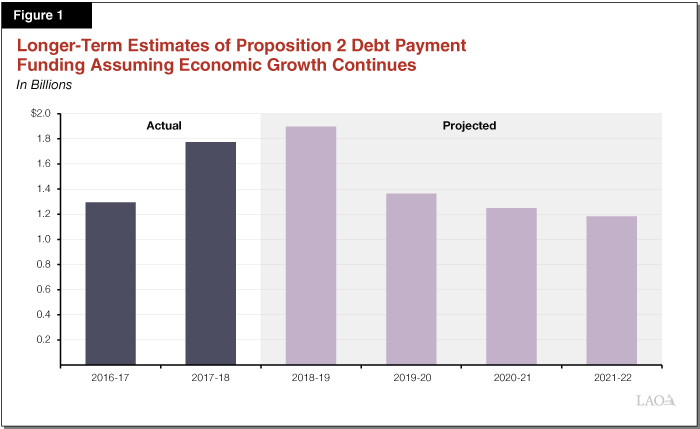 Debt Funding Lower in Recession Scenario. In a recession, the state is able to suspend rainy day fund deposits under certain conditions, but debt payments cannot be reduced. However, in a recession excess capital gains likely will be low or zero and Proposition 2 debt funding only results from the calculation’s base amount. In our Fiscal Outlook estimates, under a recession scenario, Proposition 2 debt payment funding would be about $400 million lower in each 2019‑20 and 2020‑21 and $250 million lower in 2021‑22.

Existing Commitments for Funding Total About $1 Billion Annually. As noted above, the Legislature and Governor have reached agreements in recent years on certain uses of Proposition 2 debt funding. Based on these past agreements (which are largely reflected in the administration’s multiyear debt and liabilities estimates) we estimate the following costs:

Together, these existing commitments would total more than $1 billion annually over the next few years.

Existing Debt Payment Priorities May Use All Funding Until Mid-2020s. Under our estimates, Proposition 2 funding amounts would be around $1.2 billion each year, assuming the economy continues to grow. As such, the $1 billion in commitments described above would consume the vast majority of Proposition 2 debt payment funds—at least in years when stock market growth is at or below average. By the mid-2020s, assuming special fund loans and the CalPERS borrowing plan are fully repaid, there could be some additional capacity for new Proposition 2 funding commitments. Thereafter, until Proposition 2’s debt payment provisions expire in 2030‑31, the state might have some additional capacity for new commitments.

Significant Stock Market Gains Could Result in Temporary Capacity. The projection shown in Figure 1 assumes relatively flat stock market growth in our multiyear projections. As a result, these estimates do not anticipate large, but temporary, increases in Proposition 2 debt funding that could occur if the stock market experiences significant growth. For example, if our estimates of capital gains and Proposition 2 debt funding come to pass in the June 2018 budget package for 2018‑19 (or if there were stock market gains in any other future year), the state could have hundreds of millions of dollars in additional debt funding in that year. These additional funding amounts could be used to pay more toward any eligible Proposition 2 debts on a one-time or short-term basis.

Less Funding Available in a Recession. The projection shown in Figure 1 also assumes the economy continues to grow, producing positive revenue growth in each year. If this does not occur, for example in the case of a recession, debt funding would be lower than what we have shown here. In fact, under the estimates provided earlier, debt funding requirements would be lower than the currently planned repayments. The state would either have to reduce repayments or use other General Fund resources to keep repayments the same. This could push repayments of more flexible items—such as settle up, the CalPERS borrowing plan, or special fund loan repayments—to later years, reducing the capacity for new commitments after the mid-2020s.