Hastings College of the Law

College’s Budget Condition Is Somewhat Improved, Though Legislature Faces Key Upcoming Decisions. In recent years, Hastings College of the Law has been deficit spending, largely due to its decision to increase the amount of tuition discounts it provides to students. In 2018‑19, the college is starting to implement a multiyear plan to eliminate its deficit. The key components of the plan are reducing tuition discounts and increasing resident student tuition charges. Though the plan would eliminate the college’s structural budget imbalance by 2021‑22, the plan comes at significant cost to the college’s students. In 2019‑20, for example, the college proposes to increase resident tuition for its juris doctor program by $4,349 (10 percent). We recommend the Legislature ask Hastings to report during spring hearings on its multiyear budget plan and consider a broader array of strategies to eliminate the school’s deficit.

In this report, we provide an overview of the Governor’s proposed budget for Hastings College of the Law (Hastings), describe the school’s proposed spending plan, assess that plan, and offer an associated recommendation.

Hastings Estimated to Receive $57.7 Million From Core Fund Sources in 2018‑19. This level reflects a $1.8 million (3.2 percent) increase from the current year. As the top half of Figure 1 shows, Hastings’ primary source of funding is student tuition and fee revenue ($42.2 million in 2018‑19), followed by state General Fund ($13.8 million), with a small amount ($1.6 million) coming from other sources.

Governor Proposes $1.1 Million (8.7 percent) General Fund Base Increase. The bulk of this funding is unrestricted, but $20,000 is specifically for debt‑service costs on recently sold lease‑revenue bonds.

Hastings Anticipates Slight Increase in Tuition and Fee Revenue Due to Enrollment Growth. Neither the Governor nor Hastings proposes to increase tuition charges in 2018‑19, leaving tuition flat for the sixth consecutive year. Hastings anticipates gross tuition and fee revenue will rise by $658,000 (1.6 percent) due to planned enrollment growth. Hastings plans to enroll 926 full‑time equivalent (FTE) juris doctor students in 2018‑19, reflecting an increase of 17 students (1.9 percent) over the current year. Hastings plans no enrollment growth in its two smaller master’s degree programs, which currently enroll 23 FTE students.

Hastings Would Increase Spending by $1.2 Million (1.8 Percent) in 2018‑19. Most of this increase is for (1) a 3 percent general salary increase for faculty and staff ($676,000), and (2) Hastings’ portion of implementation costs for UCPath ($350,000). UCPath is the University of California’s new payroll system. The remaining increase would be for a variety of other cost increases, including financial aid grants ($90,000), employee benefits ($84,000), and debt service for lease‑revenue bonds ($20,000). The school also anticipates achieving $40,000 in savings due to various operational changes, including reduced procurement costs.

Hastings Is Beginning to Reduce Its Deficit Spending. In recent years, Hastings has been deficit spending—that is, spending more annually than it receives in funding. This deficit spending has been due primarily to the school’s decision, beginning in 2015‑16, to increase merit‑based and need‑based student financial aid (known as “tuition discounting”). The increase in tuition discounting was part of an effort by the school to attract additional higher performing students. Hastings has covered deficit spending from a reserve it maintains of tuition and other nonstate monies. In 2018‑19, the school plans to reverse this course and begin to reduce tuition discounting and, in turn, its deficit spending. Specifically, Hastings proposes a tuition discount rate of 38 percent for its incoming fall 2018 cohort, a decrease from the 42 percent discount rate provided in the current year. As the bottom half of Figure 1 shows, Hastings anticipates a $7.5 million deficit in 2018‑19, down from $8.1 million in the current year. Hastings projects having a $9.5 million reserve at the end of 2018‑19.

Hastings Anticipates Increasing Tuition in Later Years to Eliminate Its Deficit Spending. The budget year would represent the first year of a multiyear plan by Hastings to eliminate its budget deficit. The plan makes three key assumptions: (1) no increases to state funding over the period, (2) increases to resident tuition charges beginning in 2019‑20, and (3) tuition discounting of 30 percent. Hastings’ plan also assumes the school will steadily grow its operating costs, as well as slightly reduce and then hold juris doctor enrollment to about 900 FTE students. According to the school, this enrollment level reflects a long‑term trend of declining enrollment due to slackening workforce demand for lawyers. As Figure 2 shows, Hastings projects this plan would gradually reduce the amount of its deficit spending each year, with no operating deficit in 2021‑22. Although Hastings would continue drawing down its reserve each year through 2020‑21, it projects having a reserve of $6.2 million at the end of 2021‑22. 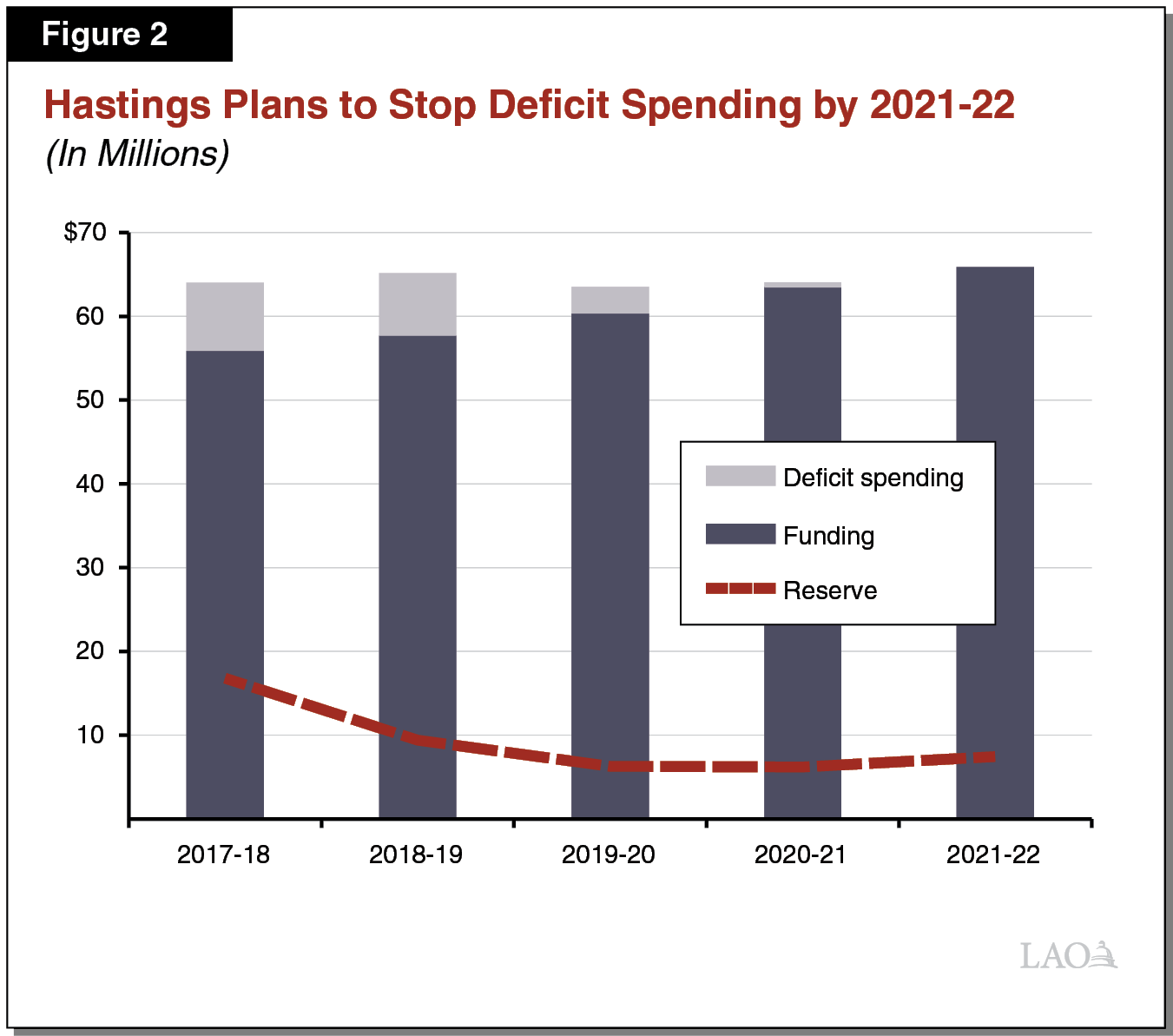 Hastings’ Core Budget on a Somewhat Better Path. As part of deliberations on the 2017‑18 budget, Hastings presented the Legislature with a five‑year budget plan to eliminate its deficit. At the time, the school projected having a reserve of $300,000 before eliminating its deficit. Though the school still anticipates deficit spending over the next three years, its budget condition has improved somewhat. The improved outlook is due largely to the school having higher‑than‑expected endowment earnings and implementing some cost controls. While Hastings’ budget appears to be on a somewhat better trajectory compared to last year, the plan is subject to some uncertainty. For example, the Legislature could face pressure to reduce General Fund support to the school were the state to experience a recession. On the other hand, revenues could exceed expectations were the school to continue to experience strong endowment earnings.

Students Could Face Notable Cost Increases in Future Years. Tuition at Hastings has remained flat for several years. The upcoming tuition charges proposed under Hastings’ plan, however, would represent significant cost increases for students. In 2019‑20, for example, Hastings plans to grow resident tuition for its juris doctor program by $4,349 (10 percent).

Recommend Legislature Review Hastings’ Multiyear Budget Plan in the Spring. The Legislature likely will face important decisions this year and in the coming years regarding Hastings’ tuition levels and state funding levels. To help inform these decisions, we recommend the Legislature ask Hastings to report during spring hearings on its multiyear budget plan to eliminate its operating deficit. As part of its review, the Legislature may want to ask Hastings to consider a broader array of strategies to eliminate its operating deficit. Such strategies could include: (1) increasing Hastings student‑faculty ratio by adjusting staffing levels; (2) increasing tuition more gradually by instituting a modest increase in 2018‑19; and (3) reducing the school’s planned employee compensation and other operating cost increases.