Local Governments’ Shares of Property Tax Revenues Vary. Statewide, schools received about 40 percent of property tax collections, counties 25 percent, cities 18 percent, and special districts (including former redevelopment agency debts) 17 percent. These figures, however, are statewide averages. The share of property taxes allocated to specific counties, schools, and other local governments varies across the state. Among other factors, this variation reflects taxation decisions of the mid-1970s. In some counties, the distribution of property tax revenues differs considerably from the statewide average. Orange, San Mateo, and Santa Clara Counties get a comparatively small share and schools in these counties receive above-average shares. Los Angeles and San Francisco Counties, in contrast, get a larger share of the countywide property tax and their schools receive smaller shares.

New County Assessor Grant Program. The administration proposes a new county assessor grant program, termed the State Supplementation for County Assessors Program (SSCAP). Under SSCAP, the state would, beginning in 2018‑19, allocate $5 million each year for the next three years to select county assessors. No county could receive more than $750,000 in any year. The funds could be used to hire new staff and improve information technology systems. Counties would apply to the Department of Finance (DOF), who would review the applications and select the participants. Counties would be required to match every $2 of SSCAP funding with $1 of local funds.

Assessor Reporting and Outcome Measurement. Participating counties would be required to report workload and outcome data to DOF. In a 2022 report to the Legislature, DOF would use this data to estimate the extent to which SSCAP funding resulted in higher property tax collections. Specifically, DOF would track the increase in taxable property values attributable to tasks completed by employees hired using SSCAP funding. DOF would then adjust these figures to account for any changes in productivity among existing staff. To determine if existing employees experienced a change in productivity, DOF would compare the value added by existing employees during years the county receives SSCAP funding to a baseline year (2017‑18).

An Example. To see how DOF’s proposed methodology would work, consider an example. In 2017‑18, tasks completed by the assessor staff in a participating county resulted in an increase of $500 million in taxable property values. In 2018‑19, the county receives SSCAP funding to hire five new staff. In 2018‑19, work completed by the new staff results in $100 million in additional taxable value. In the same year, existing staff account for $450 million in additional taxable value—a $50 million decline from 2017‑18. On net, the estimated effect of SSCAP on taxable property values is $50 million ($100 million created by SSCAP staff minus $50 million decline among existing staff).

Reasonable to Consider Funding for County Assessors. Our review of SCAPAP (the earlier pilot program) suggested that additional funding for county assessors had a modest effect on property tax collections. Despite this, there are reasons the Legislature should consider providing additional funding to county assessors—whether via the administration’s proposal or an alternative program. A state grant program could help county assessors fund resource needs that may have been overlooked locally. In addition, if the grant program were to provide more funding to counties that pay a higher share of administrative costs, it could help to lessen intercounty disparities. Another reason to consider creating a new grant program is that no single evaluation is conclusive. Supplementing the information gleaned from SCAPAP with additional data from a new program could improve the Legislature’s ability to draw conclusions about the benefits of additional funding for county assessors.

Measuring Effect of Funding on Property Tax Collections Is Difficult. Crafting a program to measure the effect of additional county assessor funding on property tax revenues is difficult. This is because it is not possible to know how much revenue would have been collected in the absence of additional funding. If SSCAP funding is not provided to counties, two scenarios are possible: (1) tasks that could be completed by SSCAP staff would not be done and taxable property values would not increase or (2) these tasks would be absorbed by existing staff and taxable property values would increase anyway. The DOF proposes to account for the possibility of scenario two by tracking changes in productivity among existing staff. This proposed methodology is an improvement over SCAPAP, which did not account for this possibility. Nonetheless, the proposed methodology remains imperfect. The number of tasks completed by a typical assessor staff fluctuates naturally from year to year and county to county. Figure 1 shows, for example, how new construction assessments per staff assessor staff member varied among the ten largest counties over the past couple decades. Not only did the average of the ten counties fluctuate from year to year, but the variation around the average was even more substantial. These fluctuations often are driven by external factors, such as the amount of building or property sales that occur in a year. These natural fluctuations would make it difficult for DOF to discern whether changes in productivity among existing staff would have occurred naturally or occurred because of SSCAP funding. 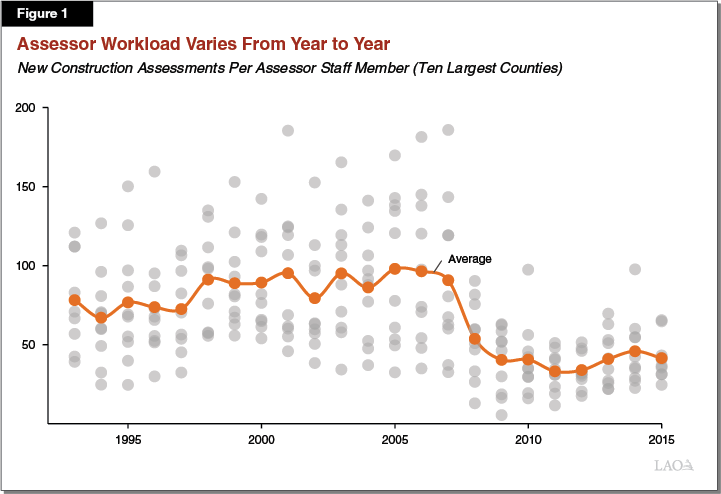 There is no easy solution to this issue. In light of this, should the Legislature approve SSCAP (or a similar program) it may want to consider directing DOF to use multiple approaches to evaluate the outcomes. One alternative approach could be to develop a statistical model to estimate what would have happened to taxable values in the absence of the funding and compared these estimates to the outcomes under the program. A model for such an approach can be found in our evaluation of SCAPAP.

Consider an Alternative Approach. The administration’s proposal does little to address the underlying concerns that arise from requiring counties to pay the schools’ share of administrative costs. It is difficult to correct this issue with a small amount of limited-term funding provided to a subset of counties. More substantial ongoing funding would be needed to truly correct this problem. Nonetheless, the Legislature has some options to better address this issue within the structure of a smaller, limited-term program. One approach could be to make the $15 million in funding proposed by the administration ($5 million per year over the next three years) available for grants to county assessors to help cover one-time costs of technology upgrades. The Legislature could create a more level playing field for counties by setting the grants equal to the schools’ share of the cost of the upgrades. Doing so would mean that each county would pay a share of costs for the upgrade that is proportionate to their share of any new revenue generated from the upgrade. Focusing on technology upgrades also would have a few advantages. Compared to paying for both staff and technology, focusing on technology would allow the funding to be spread across more counties. In addition, technology upgrades are more likely to have a lasting impact on assessor productivity compared to limited-term staff whose effect on output generally ends when they leave the office.