Grant Delivery System Is How CSAC Administers Financial Aid. The CSAC uses an information technology (IT) platform known as the Grant Delivery System to process student financial aid applications, make aid offers to students, and manage aid payments. Students and campus administrators also use the system. Most notably, students use the system to submit financial aid applications and administrators use it to process financial aid payments on behalf of students. The CSAC has used its current IT system for 30 years. The annual average cost of operating and staffing the current system is $9.9 million—consisting of $8.1 million in staff (81 full-time equivalent positions) and $1.8 million in other operating costs.

State IT Projects Generally Go Through State Approval Process. Most state IT projects are required to go through the Project Approval Lifecycle (PAL), a four-stage planning process overseen by the California Department of Technology (CDT). As Figure 1 shows, the process begins with an agency identifying a programmatic problem or opportunity and ends with bidding the project and finalizing IT project details. Once a project has completed the fourth stage, the agency may execute the project. The CDT continues to provide project oversight during and after project execution. 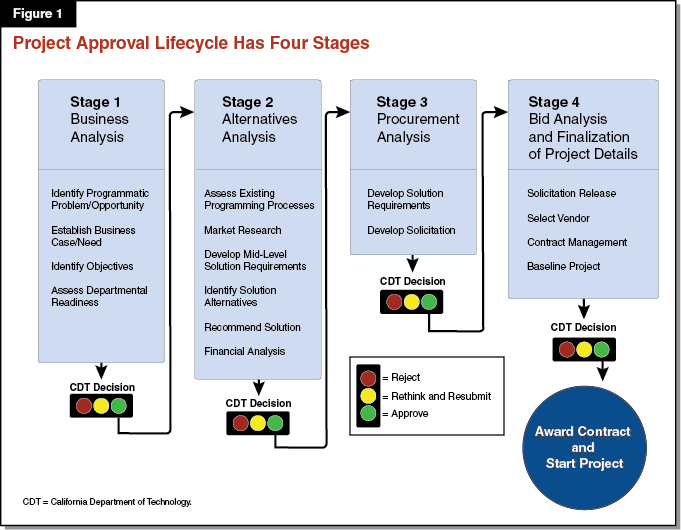 Grant Delivery System Replacement Project Has Been Progressing Through Process the Past Few Years. The Grant Delivery System replacement project recently completed stage three of PAL. The CSAC indicates the project will enter stage four in spring of 2018. The CDT estimates that CSAC is on schedule to execute the project beginning in July 2018. Recent budgets have provided a total of $1.8 million in one-time funding to CSAC for staff to help develop and navigate the project. Of this amount: (1) the 2015‑16 budget included $842,000, (2) the 2016‑17 budget included $396,000, and (3) the 2017‑18 budget included $546,000 (see Figure 2). Additionally, CSAC has shifted about ten staff from working on the current Grant Delivery System to assisting in planning the new system. The CDT indicates that shifting some existing staff resources during the planning phases is common with PAL.

Governor Proposes to Provide Funding to Execute Replacement of Grant Delivery System. The Governor’s budget includes $7.4 million in one-time funding for CSAC to begin the replacement of its Grant Delivery System (see Figure 2). Of the $7.4 million, CSAC indicates $5.5 million would go to project vendors to (1) build, test, and pilot the new system; (2) conduct project management activities; and (3) provide training and materials for staff using the new system. The remaining $1.9 million would go to licensing fees, staffing and overhead costs, and fulfillment of certain CDT project requirements, such as independent project oversight. The $7.4 million would be the first-year cost of a two-year project. In 2019‑20, the administration anticipates that it will request a further $8.1 million in one-time funding to complete the project. After the project is completed, the administration indicates that the estimated ongoing costs to support the system will be $11.1 million—consisting of $8.8 million in staff (about 90 full-time equivalent positions) and $2.3 million in other operating costs.

CSAC Would Continue to Dedicate Staff to the Project. The CSAC would continue to dedicate about ten staff to the project during the two-year replacement project. Thereafter, CSAC would transition all GDS staff previously assigned to the old system to the new system. The responsibilities of shifted staff would be similar to their previous CSAC responsibilities, with IT staff working on the technical aspects of the new system and program staff assisting system users, performing accounting tasks, and undertaking research activities (such as analyzing system usage).

Administration Intends to Submit a Modified Proposal at May Revision. The Governor’s May Revision is likely to reflect some minor changes in estimated project costs. The Governor’s January proposal reflected estimates of project costs based on what vendors indicated they would charge if they were to deliver the entire project at one time. Since developing those estimates, CSAC has determined it likely will take a different approach that divides the project into multiple tasks and completes those tasks before moving to the next. The CDT indicates the latter approach can better control costs.

Grant Delivery System Replacement Project Is Needed. Since the Grant Delivery System was developed 30 years ago, financial aid programs and technology have changed notably. The current system is unable to accommodate many of these changes without numerous work-arounds and manual processes. In addition, during the last year, CSAC reports that the system has experienced over 25 unplanned outages. During these outages, students could not submit applications or update their school information, high schools could not upload grade point average information, and colleges could not request Cal Grant payments.

Project Plan Appears Reasonable. The CDT has approved the project thus far and indicated that the project is on track to complete stage four and be executed in 2018‑19. Moreover, the recent decision to break the project into smaller components likely will lower costs somewhat. We recommend the Legislature review the Governor’s modifications to project costs during its May Revision deliberations. If the modifications are reasonable, we recommend the Legislature approve the project.