As part of a multiyear budget agreement (spanning from 2016‑17 through 2018‑19), the Governor and Legislature agreed to reimbursement rate and slot increases for child care and preschool programs. The Governor proposes to implement the final year of this agreement. In tandem with implementing the rate increases, the Governor proposes to make a certain hold harmless provision permanent. In this post, we first provide background on the reimbursement rate used for certain child care providers. We then describe and assess the Governor’s related hold harmless provision and end by making associated recommendations.

Some Providers Reimbursed Using Regional Market Rate (RMR). Reimbursement rates for voucher providers vary based on the county in which the child is served. These reimbursement rates are referred to as the RMR and are based on regional market surveys of a sample of licensed child care providers. RMR rates differ based on various factors—most notably, the age of the child served and the child care setting (for example, a family home versus a center). The RMR reflects the maximum amount the state is willing to pay. If a provider charges less than the maximum amount, the state reimburses the actual charge. The state typically sets the RMR at a certain percentile of the survey. Currently, the state links the RMR to the 75th percentile of the 2016 survey (the most recent survey available). This ensures that all children have access to at least 75 percent of their local child care providers.

State Has Increased the RMR Four Times in Recent Years. As Figure 2 shows, the state increased the RMR several times from 2014‑15 through 2017‑18. These rate increases primarily entailed moving to more recent market surveys. The state still was using the 2005 market survey to set rates up to January 1, 2015. By January 1, 2018, the state had begun using the 2016 survey to set rates. Over this period, state RMR funding increased by 26 percent.

Amidst Rate Changes, Providers Held Harmless. Over this period, rate changes were accompanied by temporary hold harmless provisions giving providers the higher of the new or former rates. This means no provider would receive less than it received in the year prior to the rate change. Chapter 15 of 2017 (AB 99, Committee on Budget) effectively removes the final hold harmless provision on December 31, 2018. That is, beginning with January 1, 2019, all providers are to receive rates set at the 75th percentile of the 2016 survey, even if lower than the rates they had received based upon an earlier market survey.

More Than One-Third of Slots Funded Using Hold Harmless Rate. As Figure 3 shows, slightly less than two-thirds of slots (63 percent) funded by the state use the most recent survey to determine their rate. Due to the hold harmless provisions, the remaining 37 percent of slots are funded based on rates derived from prior surveys. Two primary reasons explain why rates for these slots are derived from prior surveys. In some cases, market rates have decreased in the region (possibly because of increased competition or decreased demand). In other cases, the prior rate increases gave families access to more than 75 percent of the market. For example, the 4.5 percent across-the-board rate increase in 2015‑16 resulted in rates exceeding the 85th percentile of the market in some regions, with the exact percentile depending on the region. 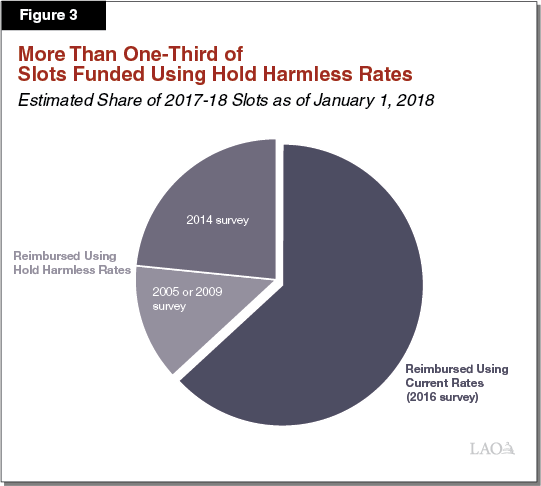 Permanently Extends Hold Harmless Provision. The budget includes $14 million to permanently extend the RMR hold harmless provision so that no provider moving forward receives less than it received on January 1, 2018. As noted above, the state currently reimburses providers based on the 2005, 2009, or 2016 market survey, depending upon which survey yields them the highest rate.

Hold Harmless Provision Continues to Disconnect Rates From Child Care Market. Hold harmless provisions allow low-income families in certain areas of the state to access a larger share of their child care market by reimbursing some providers at rates higher than the 75th percentile of their regional markets. By extending the hold harmless provisions, the Governor’s proposal perpetuates inequities in access and reimbursement rates across the state.

Reject Governor’s Hold Harmless Extension. We recommend the Legislature allow existing hold harmless provisions to expire at the end of 2018. At the 75th percentile of the most recent survey, families in all areas of the state have access to the vast majority of child care providers in their areas.

With Same Amount of Proposed Funding, Could Add 1,500 Slots. Rather than giving families in a few areas more access to care by extending the hold harmless provision, the Legislature could consider using the proposed augmentation ($14 million) to provide about 1,500 additional Alternative Payment slots. It could distribute the 1,500 additional slots based upon each region’s share of the unserved eligible population. This option would (1) cost the same as extending the hold harmless provision, (2) reduce existing access-to-care inequities, and (3) ensure families across the state moving forward have more equitable access to care.