This post evaluates the administration’s January 2018 Gann Limit estimates. For more detail on how the limit works, see the first half of our March 2017 report, The 2017‑18 Budget: Governor’s Gann Limit Proposal.

State Constitution Limits State and Local Appropriations. Proposition 4 (1979) added Article XIIIB to the Constitution, which established an appropriations limit on the state and most local governments. These limits are also referred to as “Gann Limits” in reference to one of the measure’s coauthors. The fundamental purpose of the Gann Limit is to keep real (inflation adjusted) per person government spending under 1978‑79 levels. The measure requires that a complex series of calculations be performed each year to compare appropriations to the limit. If in two consecutive years the state has revenues that cannot be appropriated because of the limit—meaning the state has “excess revenues”—the Constitution requires the excess to be split between taxpayer rebates and additional Proposition 98 spending.

Step 1: Calculate Appropriations Limit. Figure 1 summarizes the state’s appropriation limit (SAL) calculation. Step 1 in the figure shows how the state adjusts its limit each year. Specifically, the limit is adjusted upward to reflect growth in inflation and population. Inflation is measured as the year-over-year growth in California fourth quarter per capita personal income, while population growth is based on a weighted growth measure that blends growth in the civilian population with growth in K-12 and community college average daily attendance. The limit also needs to be adjusted for: 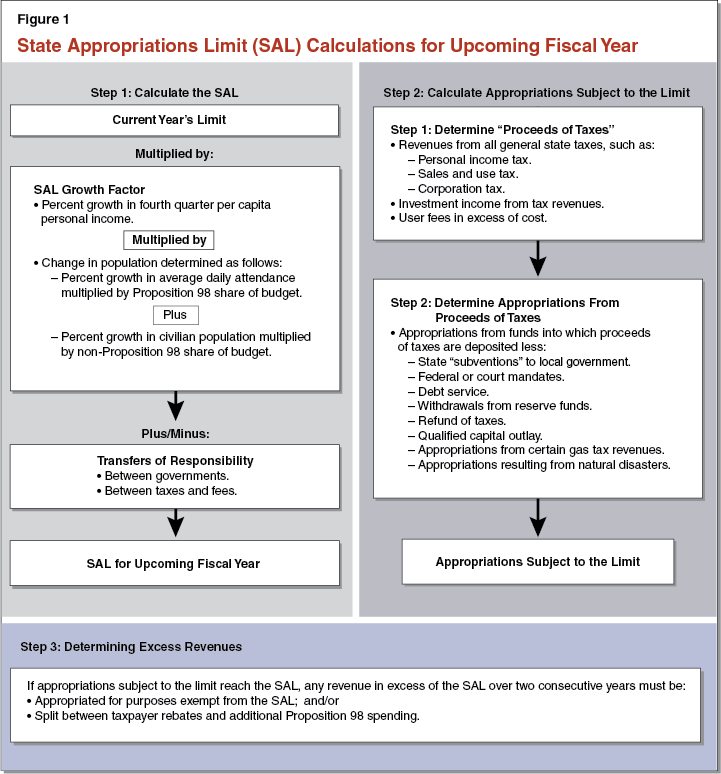 Step 3: Compare Appropriations Limit With Appropriations Subject to Limit. The final step of the process is to compare appropriations with the limit. When appropriations are less than the SAL, then the state has “room” under its limit. If the state over any two-year period has revenues that it has not appropriated (because it has spent up to its limit), excess revenues must be (1) appropriated for purposes exempt from the SAL and/or (2) split between additional Proposition 98 spending and taxpayer rebates.

Core Principle: Appropriations From Tax Revenues Must Be Counted Somewhere in Calculations. Keeping spending under the 1978‑79 level was the fundamental purpose of Proposition 4. In order to achieve this purpose, the Gann Limit requires that appropriations from all state and local tax proceeds be counted somewhere in the state or local calculations. Not counting appropriations from tax proceeds in the calculations allows for more government spending capacity than the 1978‑79 level, thus undermining the purpose of Proposition 4.

State Law Sweeps School District Room, Essentially Maximizing State Flexibility. State statutes detail the process by which districts administer their limits. First, school districts grow their appropriations limits using a process similar to that of the state. Next, school districts estimate their local proceeds of taxes—primarily local property tax revenue. If local proceeds exceed a district’s limit, the district increases its limit to cover the difference and notifies the state. The state then makes a corresponding downward adjustment to its own limit. In most cases, however, districts’ local proceeds are less than their limits. Statute instructs these districts to count as much state education funding as possible toward their local limits. (For purposes of this calculation, only the funding provided through the Local Control Funding Formula is included. Categorical funds are counted at the state level.) This process essentially maximizes the amount of state education funding that can be counted under school district limits. It also results in most districts spending exactly at their limits each year. Statewide, however, not all state education funding can be included under school districts’ collective limits. The balance of state aid that cannot be absorbed under school district limits is counted at the state level. This mechanism essentially counts as much state education aid as possible at the school district level. (The state applies a similar process for administering community college district limits.)

How the Administration Increased Room
Under the State Appropriations Limit

Revised Health and Human Services Mandates Costs Increases Room Notably. As shown in Figure 3, the largest difference between the administration’s June 2017 and January 2018 SAL calculations is for costs to comply with federal and court mandates, which the administration now estimates to be $19 billion, or $8.7 billion above the June 2017 level. The vast majority of the increase—about $8 billion—results from higher estimates of health and human services federal and court mandate costs.

Only Costs Resulting From Mandates Imposed After 1978‑79 are Eligible for Exclusion. The fundamental purpose of the Gann Limit is to keep real per capita government spending under the 1978‑79 level. In order to accomplish this task, the measure required a series of complex calculations to determine the 1978‑79 base. The Legislature faced various choices in implementing these calculations. For example, when the Legislature originally implemented Proposition 4, it faced a choice between excluding all federal and court mandate costs in the 1978‑79 budget or only those costs that resulted from mandates imposed after 1978‑79. The Legislature chose to include all mandate costs in effect as of 1978‑79 in the initial calculation of the base. In other words, only appropriations that resulted from mandates imposed after 1978‑79 were to be excluded from subsequent SAL calculations.

Some Excluded Mandate Costs Are Appropriate . . . Some of the administration’s excluded costs result from mandates that were imposed after 1978‑79, consistent with the original implementation of Proposition 4. For example, the administration excludes $309 million in costs resulting from a recent federal mandate that requires overtime be paid to certain In-Home Supportive Services and Department of Social Services employees. As this mandate was imposed after 1978‑79, excluded costs resulting from the mandate are consistent with the state’s implementation of the Gann Limit.

. . . But Others Are Problematic. One of the new mandates in the administration’s calculations is the State Supplementary Payment (SSP) federal minimum. In 1976, the federal government required states to maintain SSP grant levels at or above December 1976 levels. As such, the Legislature included the cost of compliance with the mandate in the initial limit calculation. The SSP federal minimum was later modified in 1983, requiring that states maintain SSP grant levels at or above March 1983 levels—increasing the state’s cost of compliance above the 1976 federal requirement. As previously mentioned, federal mandates that were in place prior to 1978‑79 were included in the initial limit calculation, while federal mandates imposed after 1978‑79 are eligible for exclusion in subsequent SAL calculations. To be consistent with the state’s implementation of the Gann Limit, it would be reasonable to exclude the incremental difference in compliance costs between the initial 1976 and the higher 1983 federally required SSP grant minimum from the SAL calculation. However, the administration excludes the total costs associated with the 1983 SSP federal minimum from its January 2018 SAL calculation ($2.6 billion in 2018‑19). This is inappropriate as the state included in its appropriation limit room to accommodate most of this spending that the administration now proposes to exclude. This has the effect of allowing for more spending that the real per capita 1978‑79 level.

Fiscal Effect of Applying Consistent Approach Uncertain. As noted above, there are some costs excluded by the administration that are inconsistent with the implementation of the Gann Limit. However, there likely are other costs resulting from post-1979 federal and court mandates the administration has not yet identified. Applying the original mandate approach would require a complete reassessment of mandates eligible for exclusion, a process that likely would require several months. We therefore cannot estimate the net effect on room under the SAL that would result from applying a mandate approach consistent with the implementation of the Gann Limit.

Administration Does Not Account for Certain School Appropriations. As described earlier, a core principle of the Gann Limit is that appropriations of proceeds of taxes must be counted in either the state’s or local governments’ Gann Limit calculations. Similar to past years, the administration counts certain K-12 discretionary grants as subventions such that these funds are excluded from the state’s limit. These funds also are excluded from districts’ local limits because (1) state law does not require districts to include them, and (2) most districts are already spending at their limits. In other words, the discretionary grants are not accounted for under state or local calculations, violating a core principle of the Gann Limit. Counting these subventions at the state level reduces room by $1.3 billion in 2016‑17, $877 million in 2017‑18, and $1.8 billion in 2018‑19.

Incorporating Recently Released Data Reduces State Room. Each year, the California Department of Education (CDE) releases data on school district finances around the middle of February. The most recent release contains actual school district data for 2016‑17. The timing of this release does not allow the administration to reflect the data in their January budget estimates. However, the data show that less state education funding can be counted toward local district limits than the administration had assumed. This reduction requires the state to count correspondingly more funding toward its own limit. Incorporating the final 2016‑17 data—as well as our estimates for 2017‑18 and 2018‑19—reduces state room by $2.5 billion in 2016‑17, $1.7 billion in 2017‑18, and $610 million in 2018‑19 (relative to the administration’s January 2018 estimates).

Administration’s Estimates Do Not Account for SAL Shifts. As described earlier, when local property tax revenue outpaces growth in school district appropriations limits, the state must transfer some of its limit to school districts to ensure that they do not exceed their local limits. The CDE data show that the downward shift in the state’s limit should be $357 million in 2016‑17. We also estimate that growth in local property tax revenue will continue to outpace growth in school district limits in at least some cases, requiring additional shifts in 2017‑18 and 2018‑19. To account for these shifts, we estimate that the SAL should be decreased by $479 million in 2017‑18 and $1.2 billion in 2018‑19 (relative to the administration’s estimates). (The administration indicates that it plans to revisit this issue as part of the May Revision.)