In this post, we provide an overview of how the state reviews teacher misconduct cases, track the backlog of cases, describe the actions the state has taken to reduce the backlog, and assess progress made to date. We encourage the Legislature to continue monitoring progress toward reducing the backlog closely over the coming year.

Commission on Teacher Credentialing (CTC) Investigates Teacher Misconduct Cases. Every year, CTC is notified of teacher misconduct cases, primarily from law enforcement agencies but also from school districts and the public. Teacher misconduct ranges from teachers committing felonies, such as sexual crimes and drug offenses, to teachers consuming alcohol during class time or roughly handling a student. When CTC is notified of a teacher misconduct complaint, its staff initiate an investigation. Upon completing their investigation, staff make a recommendation to CTC’s Committee of Credentials. The committee, in turn, makes recommendations to the commission. The Committee of Credentials can recommend a range of disciplinary actions—from issuing a warning to temporarily suspending a credential to revoking the teacher’s credential so that he or she can no longer teach in the state. The commission has the final say on what disciplinary action is taken in each case.

Department of Justice (DOJ) Prosecutes Appeals of Teacher Misconduct Cases. If a teacher disagrees with the commission’s decision, the teacher may appeal to an administrative law judge. When that happens, CTC forwards the case to the Department of Justice (DOJ). CTC compensates DOJ for prosecuting the case using funds from the Teacher Credential Fund. In prosecuting a case, DOJ attorneys perform a number of activities, including reviewing evidence collected by CTC staff, conducting further investigation, and arguing the case before the administrative law judge assigned to the case. DOJ attorneys also may settle cases prior to the case going before an administrative law judge, with the settlements going directly back to the commission for review. At the conclusion of an appeals hearing, the administrative law judge issues a nonbinding decision. The commission then typically adopts that decision and officially closes the case. Except in the case of certain violent crimes (such as murder or sex offenses requiring registry on the sex offender list), teachers may continue teaching during the time CTC and DOJ are investigating their cases.

Serious Backlog of Teacher Cases at DOJ Began to Develop Several Years Ago. In the early 2010s, the number of appealed decisions increased significantly. As Figure 1 shows, the number of appealed cases more than doubled from 2011‑12 to 2012‑13 and more than tripled by 2014‑15. Despite these increases, the state initially did not provide CTC with additional expenditure authority to reimburse DOJ for the added workload. As DOJ lacked the resources to prosecute the additional cases, the number of open cases grew—increasing from 101 open cases in 2011‑12 to 213 open cases in 2014‑15. 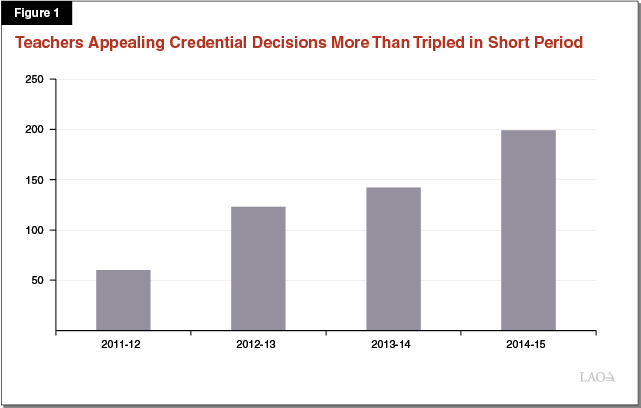 State Increased Funding in 2015‑16, but DOJ Has Left a Notable Share of It Unused. Recognizing the increase in DOJ teacher misconduct-related workload, the state increased the credential application fee from $70 to $100 in 2015‑16—expecting to generate $4.1 million in additional fee revenue that could support DOJ’s added workload. The $4.1 million augmentation was on top of DOJ’s $1.3 million prior-year funding level for these activities—for total associated funding of $5.4 million. Over the course of the next year, DOJ indicated that it was not able to increase its staffing sufficiently to use all this funding authority. In 2016‑17, CTC on behalf of DOJ carried forward $2.4 million in unspent prior-year funding authority. In 2017‑18, it carried forward $4.5 million in unspent funds. As a result of DOJ’s staffing issues, the number of open teacher misconduct cases at DOJ continued to grow—to 260 open cases in 2015‑16, 291 open cases in 2016‑17, and 313 open cases in September 2017.

State Created DOJ Reporting Requirement in 2017‑18 to Improve Tracking of Teacher Misconduct Cases. Prior to 2017‑18, the state had limited data on the teacher misconduct work completed by DOJ. To improve transparency, the Legislature enacted a quarterly reporting requirement as part of the 2017‑18 Budget Act tasking DOF with providing the number of open misconduct cases, the number of hours worked by DOJ each quarter on these cases, and the number of days spent on each case, among other data. The Legislature received the first quarterly report in November 2017. This report stated that DOJ aims to close each case within 365 days of receiving it from CTC and to maintain 150 open teacher cases at any one time—roughly equivalent to the number of cases it receives in one year.

DOJ Has Increased Staff Time on Teacher Cases but Continues to Fall Short of Using Its Full Funding Authority. The February 2018 quarterly report highlighted DOJ’s efforts to make teacher misconduct cases a greater priority by assigning additional attorney time to these cases. Specifically, DOJ increased attorney time spent on teacher misconduct cases by 452 hours (12 percent) compared with the prior quarter. This is equivalent on an annual basis to about one full-time attorney. Despite the increase in attorney time dedicated to these cases, we estimate that DOJ will spend only about $3 million of the $10 million available for appeal cases in 2017‑18.

Backlog Has Been Somewhat Reduced but Largely Due to Increase in Settlements. The February 2018 report also indicated that DOJ has reduced the teacher misconduct backlog by about 10 percent since September 2017. Though the reduction sounds encouraging, some of the reduction appears due to an increase in settlements, which have grown from 19 percent of case closures in July 2017 (3 out of 16 cases closed) to 52 percent of case closures in January 2018 (19 out of 36 cases closed). Although settlements can occur for a variety of reasons, one such reason for the increase may be a recent decision of an administrative law judge to dismiss a case on the grounds that the evidence CTC and DOJ had collected was too old.

Even Were DOJ to Meet Its Processing Time Goal, Entire Misconduct Review Process Still Very Lengthy. The February 2018 report indicated that the median DOJ processing time for a teacher misconduct appeals case is 631 days—nearly twice as long as its goal of 365 days. This processing period is in addition to the amount of time CTC spends on the case before forwarding it to DOJ on appeal. In 2016‑17, the median time spent by CTC investigating a teacher misconduct case was 414 days. Together, CTC and DOJ are taking a combined 1,045 days to close out a teacher misconduct appeals case. Even if DOJ were to reach its goal of processing an appeals case within 365 days, CTC and DOJ together would be taking more than two years to close out the median case. During all this time, innocent teachers are being inconvenienced by a lengthy investigation process and guilty teachers remain teaching.

Recommend the Legislature Carefully Monitor DOJ Processing of Backlog. As statute has only recently required DOJ to submit quarterly reports, the state does not yet have sufficient data to determine conclusively whether DOJ is making meaningful and sustained progress on reducing its backlog of teacher misconduct cases. Given DOJ’s history of a backlog of teacher cases, we recommend the Legislature closely monitor DOJ’s processing of cases throughout 2018‑19. If DOJ fails to make substantial progress, we recommend the Legislature in 2019‑20 impose a statutory timeframe for DOJ to bring a case before an administrative law judge (for example, requiring the hearing be held within 180 days of receiving a case forwarded by CTC). If the Legislature were to take such an approach next year, it could allow DOJ on a case-by-case basis to seek an extension from the presiding judge but require DOJ to report any such extensions requested and granted.