Initial Comments on the May Revision

Governor Proposes Total Reserves of $17 Billion. Figure 1 shows the General Fund’s condition from 2016‑17 through 2018‑19 under the Governor’s budget assumptions and proposals. The Governor proposes the state end 2018‑19 with $17 billion in total reserves. This would consist of two amounts: $13.8 billion in the state’s constitutional rainy day fund (reserves available for future budget emergencies), as well as $3.2 billion in discretionary reserves (available for any purpose).

Figure 2 displays the major changes between the Governor’s January Budget and May Revision. As the table shows, the Governor’s revenue estimates have increased substantially since January. However, a large portion of these revenue increases are offset by formula-driven constitutional spending requirements and other increases resulting from caseload changes and federal requirements. After satisfying these higher spending requirements, we estimate that the Governor had $4.1 billion in discretionary resources to allocate in the May Revision. We describe the major features of the May Revision below.

Total Revenues Higher by $7.6 Billion. Compared to January, the administration’s estimates of revenues and transfers have increased by $7.6 billion across the three fiscal years. These increases are primarily driven by higher revenue estimates from the personal income tax (PIT) and, to a lesser extent, the corporate tax. Over the three-year period, PIT revenues are higher than January estimates by $4.5 billion. In large part, this reflects the administration’s projected increase between 2017 and 2019 in the share of income earned by higher income households (who pay higher tax rates under California’s graduated tax structure). The administration also has raised its estimates of corporation tax revenue by $2.5 billion since January.

Constitutional Requirements Higher by $1.5 Billion. Under the administration’s estimates, constitutionally required General Fund spending is higher across the three fiscal years. These higher requirements are driven by two sets of constitutional formulas:

Medi-Cal Spending Higher by $1.6 Billion. Under the administration’s estimates and assumptions, Medi-Cal spending would increase by $1.6 billion, on net, across 2017‑18 and 2018‑19 (relative to January). The upward adjustment generally does not reflect any new policy proposals, such as expanded coverage or benefits. Rather, these changes largely reflect workload budget assumptions projecting lower available federal funding. In particular, the administration assumes:

Other Spending Higher by $263 Million. Relative to January, the Governor also estimates a variety of other smaller programmatic changes throughout the budget that arise as a result of updated estimates of caseload, prices, and other similar factors. For example, the administration estimates that In-Home Supportive Services (IHSS) costs are higher by about $300 million due to higher-than-anticipated cost per case and overtime costs. The administration also estimates Cal Grant costs will be higher (partially as a result of participation increases), CalWORKs costs will be lower (as a result of additional local realignment funds that offset state spending), and SSI/SSP costs will be lower (reflecting continued modest caseload declines).

After satisfying constitutional and federal requirements and providing funds for caseload and price growth, the Governor had $4.1 billion in available discretionary resources to allocate in the May Revision. We describe how these funds were allocated below.

Governor Increases Reserves by Roughly $1 Billion. The Governor’s May Revision sets aside an additional $1 billion in the state’s discretionary reserve, the Special Fund for Economic Uncertainties. This action brings that fund’s total balance to $3.2 billion. (The Governor also maintains his January budget proposal to bring the state’s rainy day fund to its constitutional maximum of $13.8 billion, a small increase under the Governor’s new revenue estimates.)

Governor Allocates $3.2 Billion in May Revision to New Spending. The Governor’s May Revision allocates about $3.2 billion in remaining discretionary resources to a variety of spending proposals. Of this amount, mostly all is allocated for one-time purposes, with roughly $400 million in ongoing commitments. Figure 3 shows, and we describe below, the major programmatic themes of these proposals.

Major Proposed Areas of Spending in the Governor’s May Revision

Total Discretionary Resources in 2018‑19 May Revision 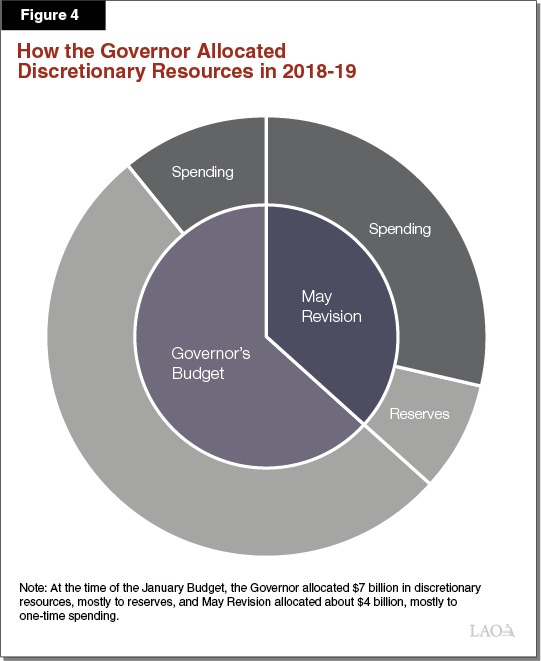 Potential Upside on Budget Condition. In the coming days, our office will release assessments of the various programmatic proposals in the 2018‑19 budget. However, our initial assessment of the Governor’s May Revision proposals suggests that there are reasons to believe the bottom line condition of the General Fund could be considerably better than the administration currently suggests. In particular, compared to the administration, our assessments imply:

Recommend Scrutiny of Medi-Cal Budget. We recommend the Legislature scrutinize the administration’s assumptions and estimates for Medi-Cal. The administration takes a new approach to projecting the costs of deferred claims, which substantially increases these costs. Based on our initial review, this amount likely represents a high-end estimate of the amount that is required. This is because the state may be able to recover a portion of this funding by submitting required supporting documentation for the claims. The amount and timing for recovering funds is unknown at this time. In the coming days, our office will review all of the major Medi-Cal adjustments.

Budget Prepared to Weather a Mild Recession. The Governor proposes a total reserve balance of $17 billion, which is slightly larger than the reserve balance proposed in January. The Governor also uses available discretionary resources for spending on largely one-time purposes. As we discussed in our recent report (Building Reserves to Prepare for a Recession), both reserves and one-time spending are important tools to prepare for a coming recession. If enacted, these proposals would mean the state is well-prepared to weather a mild recession. If the state experienced a mild recession after 2018‑19, it might not need to take many actions, such as spending cuts or revenue increases, to bring the budget into balance. However, this level of reserves would not be sufficient to fully cover the costs of a moderate or a severe recession. If the state faced one of these recessions in the coming years, the Legislature would still need to take many billions of dollars in actions over a multiyear period to bring the budget back into balance.