The capital outlay support (COS) program at the California Department of Transportation (Caltrans) provides the staff support necessary to deliver transportation infrastructure projects. COS staff conduct environmental reviews, design projects, acquire land, and manage construction work, among other activities. Each May, the Governor submits a proposed request for Caltrans’ COS staff resources for the coming fiscal year. For 2018‑19, the Governor’s May Revision proposes a $203.1 million augmentation to support 872 additional full-time equivalent (FTE) COS staff, as well as related operational expenditures. Below, we (1) provide background on the COS budget development process and COS staffing, (2) describe the Governor’s proposal for 2018‑19, and (3) identify issues for legislative consideration.

Description of Process. Caltrans’ development of its COS request involves several steps. First, each district compiles information on all of their current and planned projects (typically around 3,000 projects altogether statewide), including the estimated number of hours needed to complete project tasks (such as conducting environmental field studies or developing draft design plans) and the planned start and end date of each task. This information is then entered into the department’s project management system—Project Resourcing and Schedule Management (PRSM). Based on the information entered in PRSM, headquarters staff estimate the total level of COS staff resources that Caltrans will need to work on each project in the coming fiscal year.

Recent Concerns With Process. In our 2014 report, The 2014‑15 Budget: Capital Outlay Support Program Review, we concluded that the COS data entered into PRSM largely is unreliable. For example, we found inconsistencies between PRSM data and information provided by project managers we spoke with on district site visits. Thus, we used an alternative approach to roughly assess COS staffing needs, based on the projected volume of construction work (as measured in dollars). In other words, as total construction project value increases (or decreases) we would expect COS work to increase (or decrease) at roughly the same rate. Because construction work at that time was expected to decline by about 40 percent, we concluded that COS staffing should decline by roughly the same percent—equal to about 3,500 positions. The state budget, however, funded the COS program based on Caltrans’ methodology.

In 2016, the California Transportation Commission (CTC) convened a workgroup of representatives from the administration and legislative staff to further examine Caltrans’ COS budget development methodology. In a May 2016 report, the CTC concluded that Caltrans’ actual COS workload generally did not match its budget estimates, with the department only accurately forecasting its actual staffing needs within a 40 percent range for just over one-third of its projects. Given this lack of accuracy, the CTC concluded that “the Legislature cannot use the current methodology to hold Caltrans accountable for the development of accurate budget workload estimates.” The CTC report also cited concerns from workgroup members that Caltrans faces no penalty for overestimating its staffing needs and, in fact, has an incentive to overestimate them in order to avoid requesting supplemental funds.

Types of Staffing. COS program staffing comes from state employees, overtime, and contracts with architectural and engineering firms. For budgeting purposes, each is counted in FTEs. For instance, in 2017‑18, Caltrans has a total of 9,447 FTEs in its COS program, consisting of 8,030 state staff FTEs, 472 overtime FTEs, and 945 contract FTEs. By longstanding practice, the annual state budget has limited contract FTEs to no more than 10 percent of total FTEs. The State Constitution, however, allows the state to contract for architectural and engineering services without limits.

Long-Term Trends. Figure 1 reveals two noteworthy trends in total COS FTEs over the last eight years. First, the number of budgeted (or funded) FTEs tends to exceed the number of actual (or expended) FTEs, with Caltrans typically expending around 85 percent to 90 percent of its budgeted FTEs. (Unspent FTE funds revert to their fund source and are available for future years.) The second trend is that both budgeted and actual FTEs have steadily declined. This largely reflects a decrease in COS workload since the late 2000s, as workload related to Proposition 1B (2006) projects has winded down since that time. 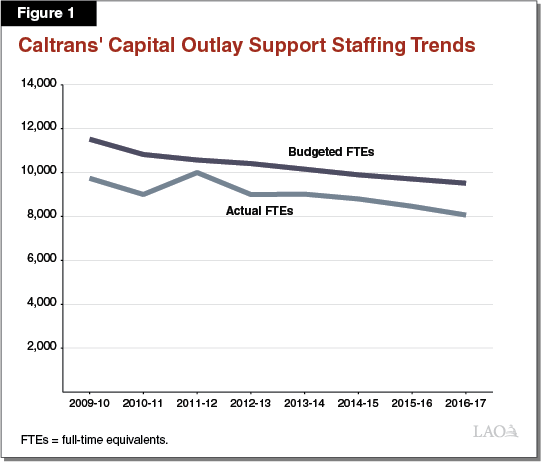 Current-Year Staffing Level and SB 1 Implementation. In April 2017, the Legislature enacted Chapter 5 (SB 1, Beall) to increase state funding for transportation by about $5 billion annually through various fuel and vehicle tax increases. The legislation phases in the tax increases, with the first ones having taken effect in November 2017. Thus, revenues in the current year reflected only a partial year of funding. For the COS program, the 2017‑18 budget increased staffing by 218 FTEs to reflect the new SB 1 workload but also decreased COS staffing by 283 FTEs to reflect declines in non-SB 1 project workload. This resulted in a net decrease of 65 FTEs. In addition, language in the 2017‑18 Budget Act authorized the Department of Finance (after legislative notification) to increase COS positions and funding if Caltrans filled at least 400 unfilled COS positions during 2017‑18.

Recent COS Hiring and Attrition Trends. Figure 2 shows monthly hiring trends and attrition within the COS program from May 2017 through March 2018. Monthly new hires tended to increase steadily throughout the fall but since then have declined somewhat. Attrition rates tended to be more steady, with the exception of spikes in July and December. (These months traditionally are when many state employees choose to retire from state service.) Over the 11-month period, Caltrans hired on average 53 employees and lost 41, for a net increase of 14 each month. Currently, Caltrans still has 137 vacant COS positions to fill (a 2 percent vacancy rate). Because Caltrans has not filled all its vacancies, the administration to date has not acted to increase COS positions as authorized under the 2017-18 Budget Act. 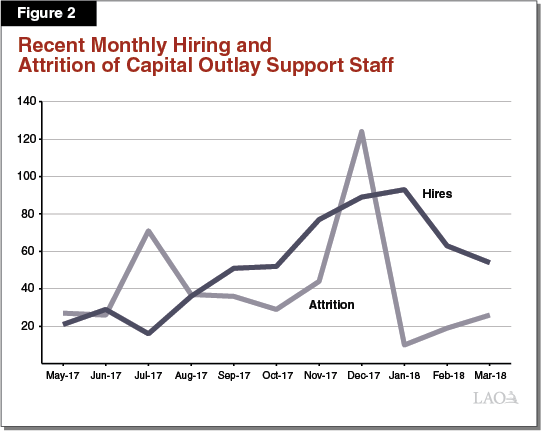 For 2018-19, the Governor’s May Revision proposes a $203.1 million augmentation from various fund sources to support 872 additional COS FTEs in 2018-19, as well as certain increased operational expenditures. Figure 3 summarizes the proposed changes in funding and staff from 2017-18 levels. According to the administration, the main reason for the proposed increase is new SB 1 workload. (However, funding from SB 1 supports only one-quarter of the increased COS costs, with the remainder coming from other state and federal accounts.) Below, we describe the Governor’s proposals for (1) state staff and contract FTEs, (2) overtime FTEs, and (3) operational expenditures.

State Staff and Contract FTEs. The Governor’s proposal budgets for state staff and contract FTEs somewhat differently than in previous years, recognizing that Caltrans will need time to further ramp up its hiring. Specifically, the proposal assumes that Caltrans each month hires 100 state staff, offset by about 35 state staff attritions, for a net monthly increase of about 65 state staff. Thus, the proposal assumes that Caltrans will add 782 new state staff by June 30, 2019. However, because the hiring is spread evenly throughout the year, this equals only 393 new state staff on a FTE basis. The remaining funding associated with the new positions is budgeted as contract FTEs. (The proposal, however, includes budget bill language to provide Caltrans flexibility to use its funding for state staff for contract work, and vice versa.) This is why the percentage increase in funding and FTEs for contract work shown in Figure 3 is much greater than for state staff. This also means that, under its phased-in hiring plan, Caltrans would end up using about 87 percent state staff and 13 percent contract staff over the whole course of 2018-19. However, under its plan, the department would meet the traditional 90 percent state staff and 10 percent contract staff split starting in June 30, 2019.

Overtime FTEs. As shown in Figure 3 above, the Governor proposes to increase overtime FTEs by 9 percent to accommodate additional SB 1 workload. However, the Governor proposes to increase the associated funding by a much greater amount—65 percent. Though not described in its budget request, Caltrans indicates that the disproportionate overtime funding increase is intended to “true up” overtime funding for its 472 existing overtime FTEs. That is, Caltrans asserts that each overtime FTE currently is funded at $80,000 even though the actual cost is $120,000. We estimate that about $19.1 million of the $24.4 million increase for overtime is related to this “true up” for existing FTEs, while the remaining $5.3 million is for new overtime FTEs for SB 1 implementation.

Operational Expenditures. The Governor’s proposal includes four augmentations for operational funding that is characterized as being related to COS staffing. These augmentations are for:

We discuss three issues for legislative consideration below regarding (1) total COS staff levels, (2) contracting out for COS work, and (3) the Governor’s overtime and operational expenditures requests.

Staffing Likely Better Aligned With Project Workload Compared to Several Years Ago, but Concerns Remain. Since our 2014 report identified a potential overstaffing of 3,500 COS FTEs, several factors have changed. First, Caltrans’ budgeted level of FTEs has decreased by over 700. Second, the amount of construction activity did not decline nearly as much starting in 2014-15 as Caltrans projected at the time. Third, SB 1 created additional funding for construction. Thus, the estimate of potential overstaffing we cited four years ago is no longer current. Nevertheless, we continue to have concerns that the COS program is overstaffed, given that both our office and the CTC have concluded that the department’s COS budget development methodology is unreliable and contains incentives to request more staff than needed. As a result, it is difficult to determine whether the department’s request for an additional 872 COS FTEs to fulfill SB 1 workload is justified, or whether Caltrans could accommodate some or all of the new workload within existing resources. Modifying the Governor’s proposal to more heavily utilize contract FTEs in the budget year could help address this dilemma, as discussed below.

Greater Use of Contracting Out Merits Consideration in the Near Term. The Governor’s proposal to provide Caltrans with additional flexibility to contract out in the budget year is intended to ensure that SB 1 project delivery is not hindered by slower-than-expected hiring (which appears likely given the pace of hiring that occurred in 2017-18). The Legislature could consider placing an even greater emphasis on contracting out in the budget year than proposed by the Governor, given the concerns cited above regarding the accuracy of Caltrans’ COS staffing estimates (thereby avoiding adding permanent state staff who might not be necessary). We note that Caltrans’ COS budget request assumes that one contract FTE costs $258,000, compared to $156,000 for a state staff FTE. However, the cost for a state staff FTE does not include indirect costs for administration, non-project training and supervision, and other activities. When Caltrans charges local governments for work done on their behalf, it factors in these indirect costs and estimates a state staff FTE costs about the same as a contract FTE.

Requests for Overtime and Operational Expenditures Raise Concerns. One overarching concern with each of the Governor’s overtime and operational expenditure requests is a lack of detailed workload justification. Most concerning, Caltrans did not even identify in its budget request that the bulk of the requested funding for overtime is for existing and not new positions, even though it cites SB 1 as the main cause for the proposed increase. Additionally, two proposals raise particular concerns. First, Caltrans’ request for funding for a DGS space study appears premature at this time, as Caltrans and DGS have yet to identify the scope of work involved in the study. Second, the request for funding to train new COS staff might be justified in the short term (if the Legislature approves additional COS state staff positions), but the need for training new staff likely would decrease over time as the ramp-up in hiring concludes. Thus, the Legislature could consider providing the funding on a limited-term basis (if it approves additional COS state staff positions).