This post presents our office’s independent assessment of the condition of the state General Fund budget through 2021‑22 under the Governor’s May Revision proposals. As is our practice at the May Revision, our assessment is based on: (1) one economic scenario, a continued growth scenario (rather than other possible ones); (2) implementation of the Governor’s policy proposals; and (3) our estimates of the future costs of state programs.

Under Our Estimates, 2018‑19 Ends With $3.5 Billion More in Discretionary Reserves. Figure 1 compares our office’s bottom line estimates of the budget’s condition to the administration’s estimates. Relative to the administration, we estimate 2018‑19 would end with $3.5 billion more in the Special Fund for Economic Uncertainties (SFEU). Simply put, the SFEU is the difference between state spending and state revenues for a given fiscal year. (Unlike the rainy day fund, which can only be used in a budget emergency, the SFEU is available at any time for any public purpose.) Three key factors explain the $3.5 billion difference:

LAO Estimates Assume No Reduction in Sales Tax Rates. California has two statutes that trigger reductions in the state’s sales tax rate if balances in the SFEU reach a certain threshold. Under either statute, the state’s sales tax rate automatically would decline by one-quarter cent for one calendar year, equal to around $1.7 billion, reducing the SFEU by the same amount. Our bottom line General Fund estimates assume these provisions are not triggered in 2018‑19. However, under our estimates of revenues and reserve balances, the state could trigger one or both of these statutory provisions. Neither provision is triggered under the administration’s current estimates.

2018‑19 Ends With Nearly $21 Billion in Total Reserves. Figure 2 compares our office’s estimates of total reserves in 2018‑19 to the administration’s estimates. In addition to the SFEU, the state holds budget reserves in the Budget Stabilization Account (BSA). Deposits into the BSA are dictated by a set of constitutional formulas in Proposition 2. In 2018‑19, the Governor proposes depositing enough reserves into the account so that the BSA reaches its maximum level, which is 10 percent of General Fund taxes. Consistent with this proposal, we assume the state fills the reserve to its maximum in 2018‑19. Under our estimates, this brings the fund’s balance to $13.9 billion in 2018‑19, slightly higher than the administration’s estimate. (Under our revenue estimates, 2017‑18 ends with a higher BSA balance compared to the administration, which lowers our estimated optional deposit in 2018‑19.)

Assuming Economic Growth, Surpluses Through 2021‑22 in LAO Outlook. Figure 3 displays our office’s outlook for the General Fund. The top part of each bar shows our projection of the annual BSA deposit. The bottom part of each bar shows the annual operating surplus (the amount by which projected revenues exceed expenditures). These operating surpluses are positive, which indicates that—assuming the economy continues to grow—the state’s budget has the capacity to pay for the Governor’s May Revision proposals and still have a few billion dollars annually to build additional reserves or make additional commitments. 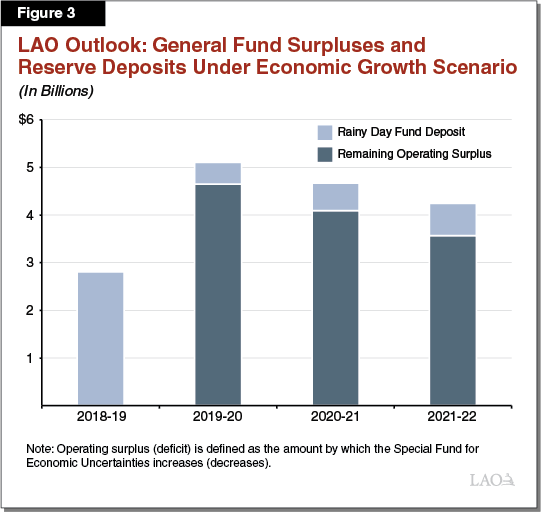 BSA Reaches Maximum in 2018‑19, Infrastructure Spending Begins in 2019‑20. As discussed earlier, we assume the state deposits enough funds into the BSA in 2018‑19 so that it reaches its maximum level. Once the BSA reaches this maximum, funds that would bring the BSA above 10 percent of General Fund taxes must be spent on infrastructure. Each year that General Fund tax revenues grow, the maximum level of the BSA also grows. Our outlook accounts for this growth by assuming deposits of several hundred million dollars into the BSA beginning in 2019‑20. In that year, the state also would be required to begin spending money on infrastructure. Similar to the administration, we estimate these spending requirements would be roughly $1 billion beginning in 2019‑20.

Proposition 98 Minimum Guarantee Grows Throughout the Period. Figure 4 shows our estimates of the minimum guarantee and compares them to the administration’s estimates. Under our outlook, the minimum guarantee grows on average by $3.2 billion (3.9 percent) per year over the period. By comparison, the administration has the guarantee growing on average $2.3 billion (2.9 percent) per year. The primary factor explaining this difference is our assumption of faster growth in General Fund revenue, particularly in 2020‑21 and 2021‑22. Partially offsetting our higher revenue assumption is our lower student attendance projection. Both of our outlooks reflect steady growth in local property tax revenue, with our growth rate somewhat higher than the administration estimates. Under each of our outlooks, higher local property tax revenue covers about half of the increase in the minimum guarantee over the period. Proposition 98 General Fund spending, in turn, grows somewhat more slowly than the guarantee itself.

Comparing Growth in Minimum Guarantee
Under LAO and Administration Estimates

Figure 5 compares our estimates of operating surpluses with the administration’s estimates. In this figure, operating surplus or deficit is defined as the amount by which the SFEU increases or decreases. While the administration displays operating deficits in the last two years of the outlook period, it still has positive SFEU balances in those years, meaning the state would have sufficient resources available to cover its costs. 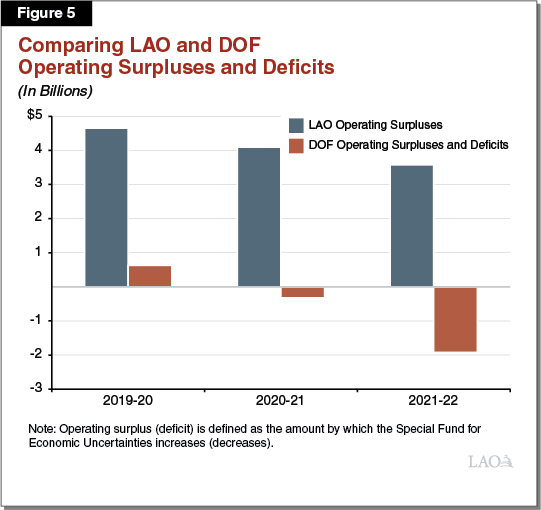 Differences in Outlook Assumptions. Four significant factors drive the bottom line differences between our outlook and the administration’s multiyear projections (some of which move in opposite directions). In particular, across the three outlook years (2019‑20 through 2021‑22), compared to the administration, our office estimates that:

Uncertainties in the Longer-Term Outlook. The budget outlook for both the budget year and outyears face uncertainties. These include:

Budget Is Prepared for a Mild Recession. As we described in a recent report (Building Reserves to Prepare for a Recession), the Legislature has two main tools to prepare for a recession. They are: (1) budget reserves and (2) one-time spending. If these tools are sufficient to cover a shortfall that emerges during a recession, the Legislature would not have to take any additional actions—primarily spending cuts or revenues increases—to bring the budget into balance. Under our estimates, the budget ends 2018‑19 with over $20 billion in reserves, a sufficient amount to cover the estimated budget problem associated with a mild recession. Additional savings would be required to cover a moderate recession—which would involve a budget problem of roughly $40 billion over a multiyear period—with reserves alone.