The Administration’s Proposition 55 Estimates in the May Revision

Proposition 55 (2016). Proposition 55 (2016) extended tax rate increases on high‑income earners from 2018 until 2030 (which voters originally passed on a temporary basis in 2012 as part of Proposition 30). Revenues raised by the measure benefit the General Fund. These revenues increase required spending on schools and community colleges through the funding requirements under Proposition 98 (1988) and increase reserve requirements and debt payments under Proposition 2 (2014). In addition, Proposition 55 aimed to increase funding for Medi‑Cal, the state’s health insurance program for low‑income Californians, through a formula administered by the Department of Finance (DOF).

Overview of the Formula. The Proposition 55 formula has three major inputs, which are shown in Figure 1. First, the measure directs DOF to estimate the upcoming year’s available revenues. Second, it subtracts from this total the constitutional minimum funding level for schools and community colleges. Third, the formula then subtracts an estimate of the “workload budget” costs of government services that were “currently authorized” as of January 1, 2016. Put simply, the workload budget is the cost of continuing to provide state services in place at that time. If a surplus results from this third step, half of it, up to $2 billion, is dedicated to increase spending on Medi‑Cal. If a deficit results, there is no additional funding for Medi‑Cal. 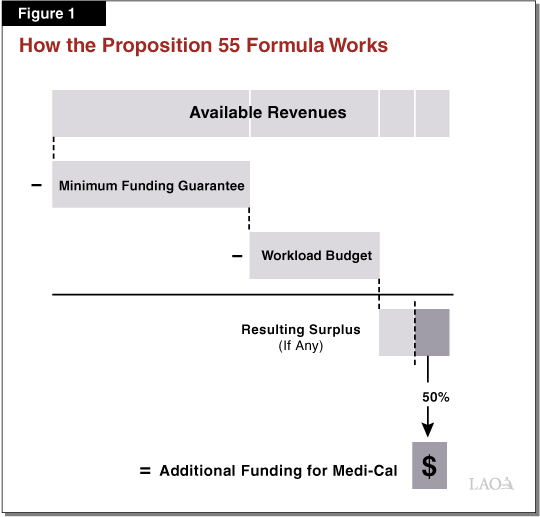 “Workload Budget” Key to Interpreting Proposition 55. One of the key provisions in Proposition 55 that is open to alternative interpretations is the “workload budget” (shown in the third step of the calculation above). Proposition 55 defines the workload budget as the budget‑year cost of “currently authorized services,” adjusted for enrollment, caseload, population, and the nine other factors. These are: (1) statutory cost‑of‑living adjustments, (2) chaptered legislation, (3) one‑time expenditures, (4) the full‑year costs of partial‑year programs, (5) costs incurred pursuant to constitutional requirements, (6) federal mandates, (7) court‑ordered mandates, (8) state employee merit salary adjustments, and (9) state agency operating expense and equipment cost adjustments to reflect price increases. Proposition 55 adds that currently authorized services must be interpreted as those that were “currently authorized” as of January 1, 2016.

The Administration Continues to Identify a Deficit Under Calculation. In January, the administration’s calculations under the Proposition 55 formula resulted in a net deficit, meaning there were no additional funds for Medi-Cal provided by the calculation. (We described these estimates in our budget brief: The 2018‑19 Budget: The Administration’s Proposition 55 Estimates.) The administration has updated its estimates in May and, as Figure 2 shows, the deficit under the calculation is now larger. That is because, although the Governor proposed new discretionary spending of over $3 billion in the May Revision, DOF counts nearly all of it as “currently authorized services” under its very broad interpretation of this phrase.