The state’s transportation system helps to move people and goods around and through the state. The aim of this primer is to provide policymakers and the public with key information about this system. The primer begins with a chapter describing transportation governance. The subsequent five chapters consist of visual charts that provide information about the following:

The appendix of this report contains a list of the data sources used in each of the figures.

Transportation governance involves a variety of federal, state, regional, and local agencies. The federal government mainly provides funding and oversees certain safety requirements. The state, regional, and local governments help fund, plan, construct, operate, and maintain different transportation infrastructure, such as highways, streets and roads, transit systems, and intercity rail. Below, we describe the roles of each level of government.

Federal. The U.S. Congress appropriates federal funding for transportation and establishes national transportation policy objectives. The main federal agency tasked with carrying out Congress’ directives is the U.S. Department of Transportation. The department consists of nine administrations that each specialize in a particular mode or aspect of transportation. For example, the Federal Highway Administration provides funding to states for the construction and preservation of federally designated highways. (Most, but not all, of California’s state highway system is part of the federal highway system.) Other administrations perform similar functions for transit, railroads, aviation, and maritime activities.

State. The California Legislature sets the state’s overall transportation policies, including establishing state revenue sources and expenditure priorities. The Legislature typically appropriates a lump sum in the annual budget act for different types of transportation projects, while delegating the authority to select specific projects to various state entities and local governments. The main state transportation department is the California Department of Transportation (Caltrans), which owns, operates, maintains, and repairs the state highway system. It also provides the railroad cars for the state’s three intercity rail services. The California Transportation Commission (overseen by 11 voting members, including 9 appointed by the Governor and 2 by the Legislature) reviews and adopts the major transportation project lists proposed by Caltrans and regional agencies and oversees project delivery. Other state transportation departments include the High‑Speed Rail Authority (responsible for planning and constructing a high‑speed rail system), the Department of Motor Vehicles (DMV) (responsible for registering motor vehicles and issuing driver licenses), and the California Highway Patrol (CHP) (responsible for enforcing traffic laws on state highways). In addition, the state passes through certain federal and state funds to regional and local agencies.

Local. California’s 58 counties and 482 cities own, maintain, and provide funding for the local streets and roads in their jurisdictions. They also typically own the commercial airports and seaports located in their communities (though these tend to be overseen by independent commissions and structured as revenue‑generating operations). Additionally, cities and counties set land‑use policies, nominate transportation projects for funding by their regional governing body, and enforce traffic laws in their communities. Some counties also have transportation authorities that are responsible for developing expenditure plans for voter‑approved local sales tax measures. The state has hundreds of transit agencies—such as the Bay Area Rapid Transit and Los Angeles County Metropolitan Transportation Authority—that deliver transit services, such as through buses, subways, and light rail. Three different joint powers authorities (groups of local governments) operate the state’s intercity rail services.

Like elsewhere in the nation, driving is the predominant mode of transportation in California. The vast majority of Californians have driver licenses, and vehicle ownership is widespread, with the number of registered vehicles exceeding the number of licensed drivers. The state has a large network of highways and local streets and roads, consisting of almost 400,000 lane‑miles of pavement and over 25,000 bridges. Most of the state infrastructure is in good or fair condition—however, the state has struggled for many years with a large backlog of maintenance projects. Maintaining existing driving infrastructure has emerged as one of the key transportation issues facing the state (and local governments).

Most Californians Have Driver Licenses 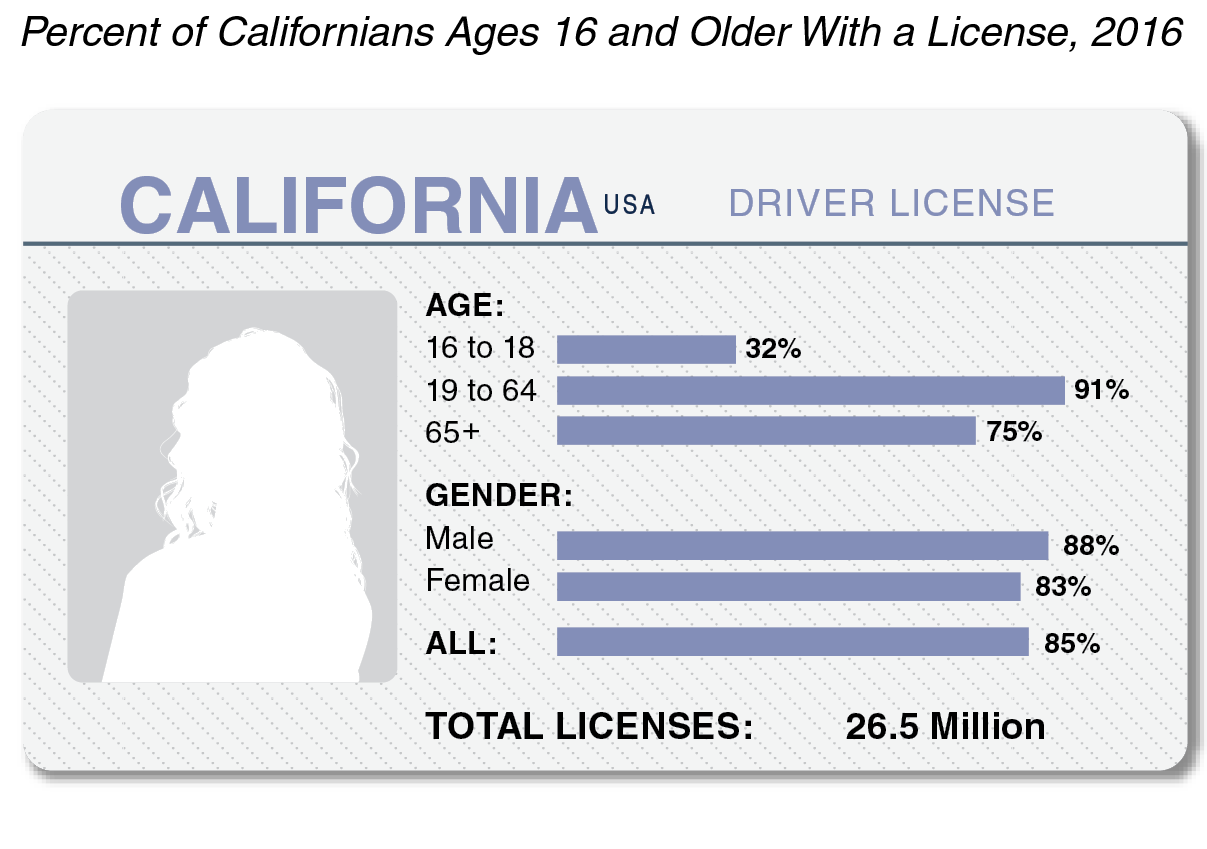 Most California Vehicles Are Cars and Use Gas or Diesel 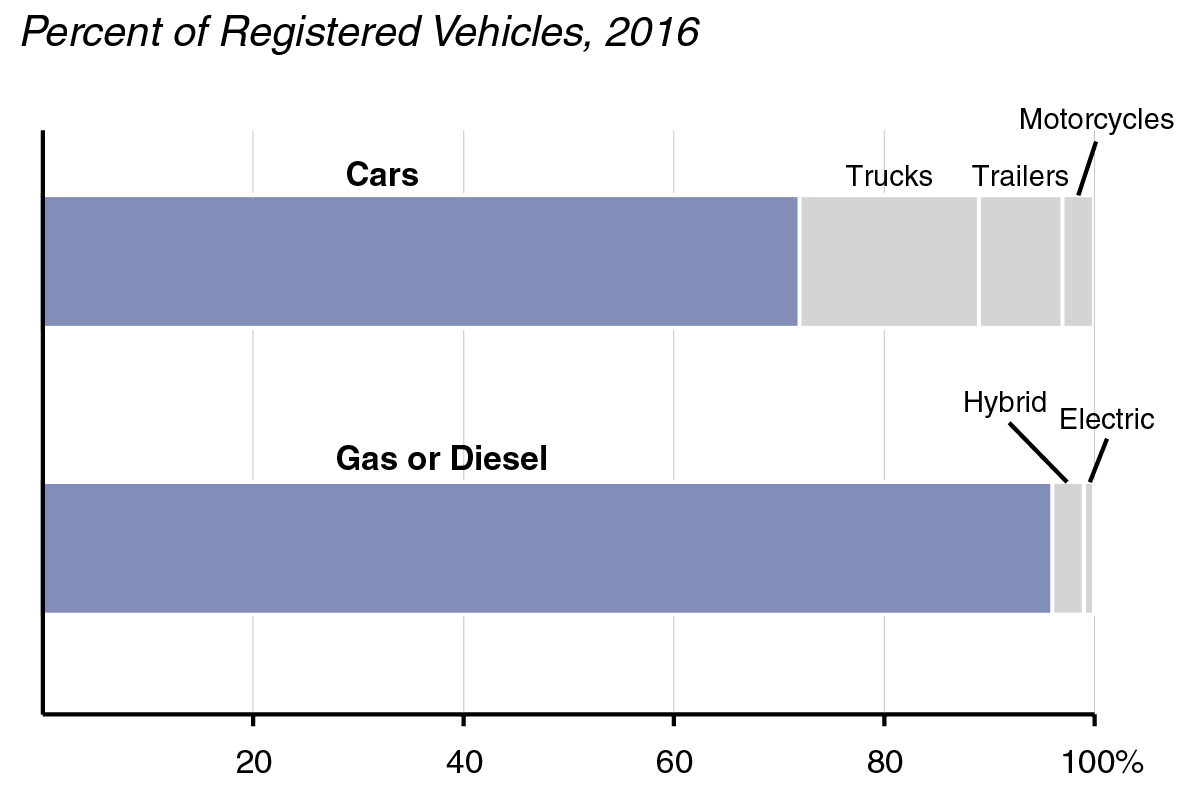 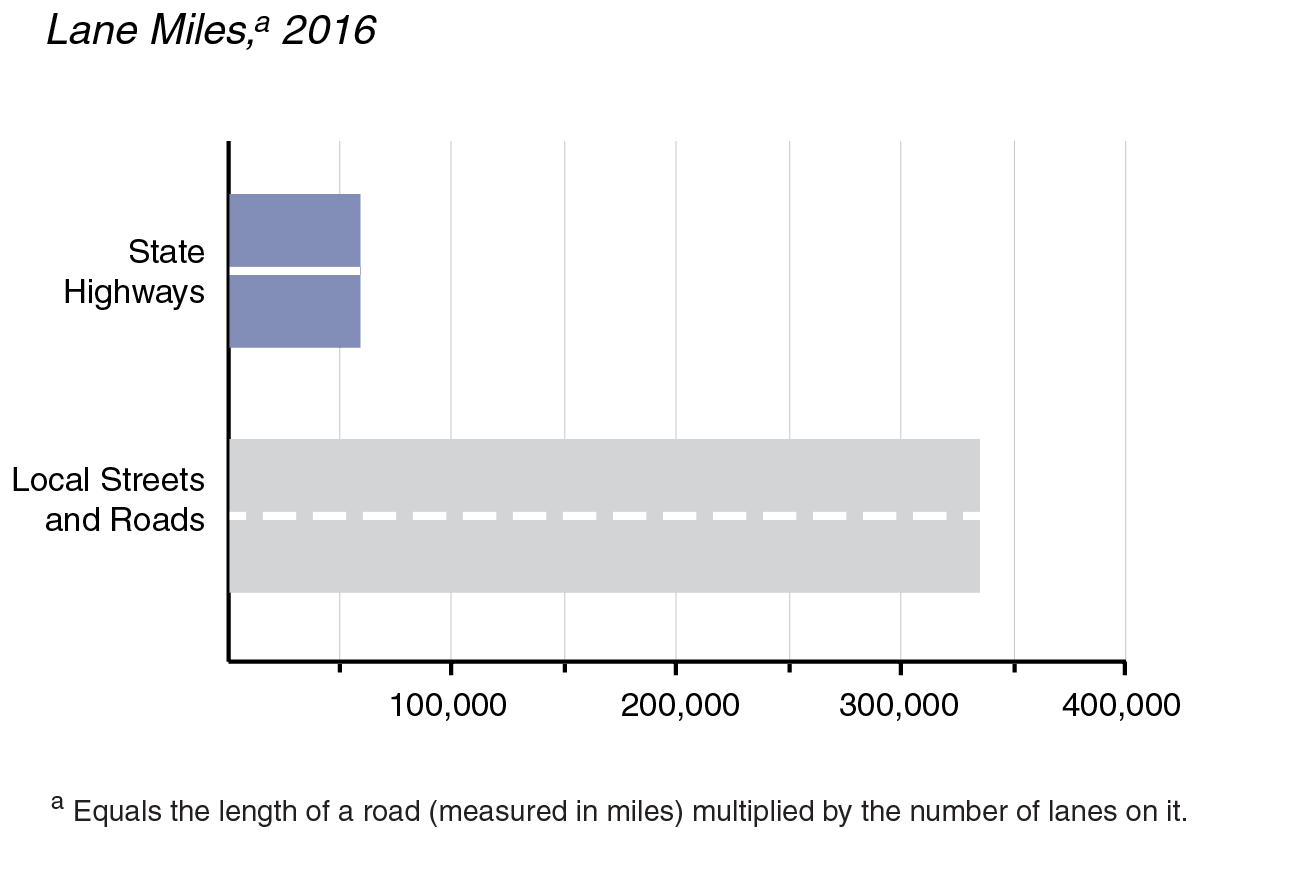 Most State Highways and Bridges Are in Good or Fair Condition 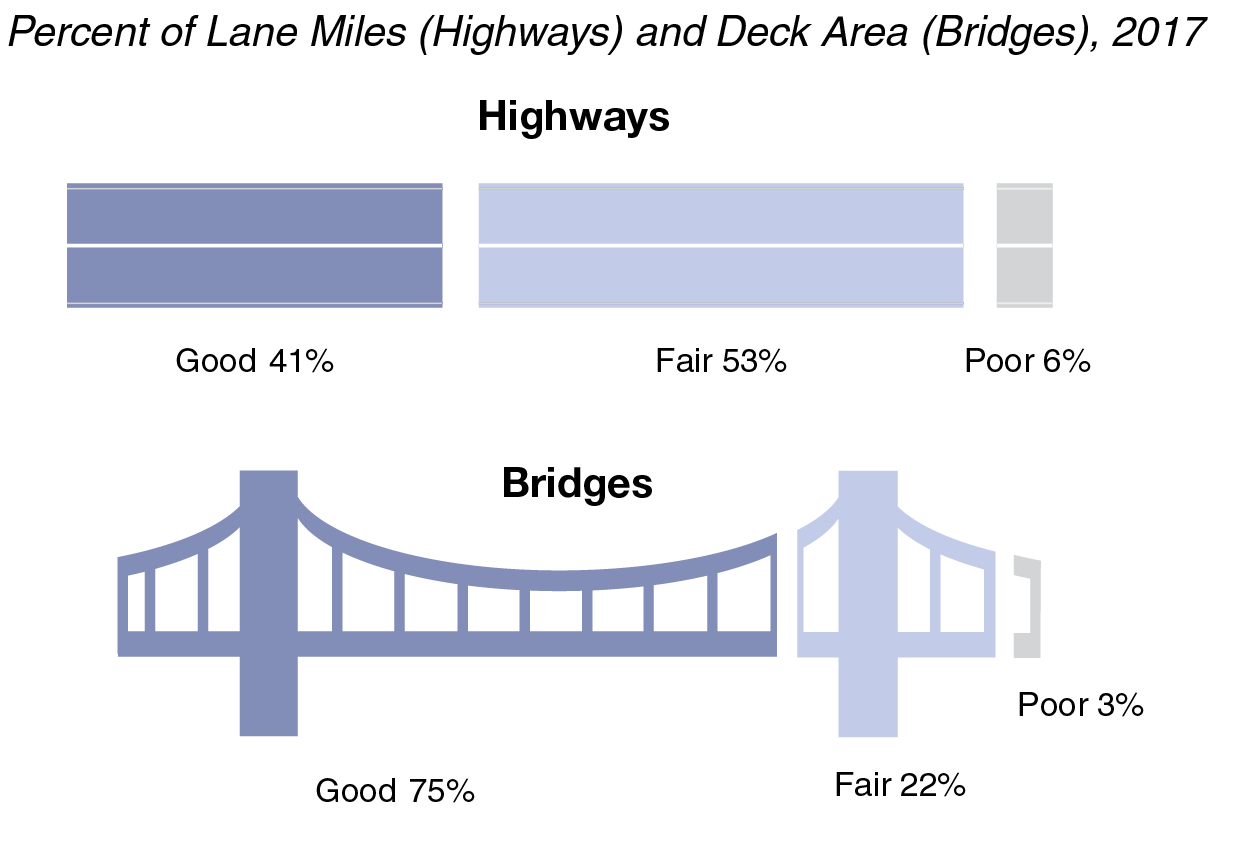 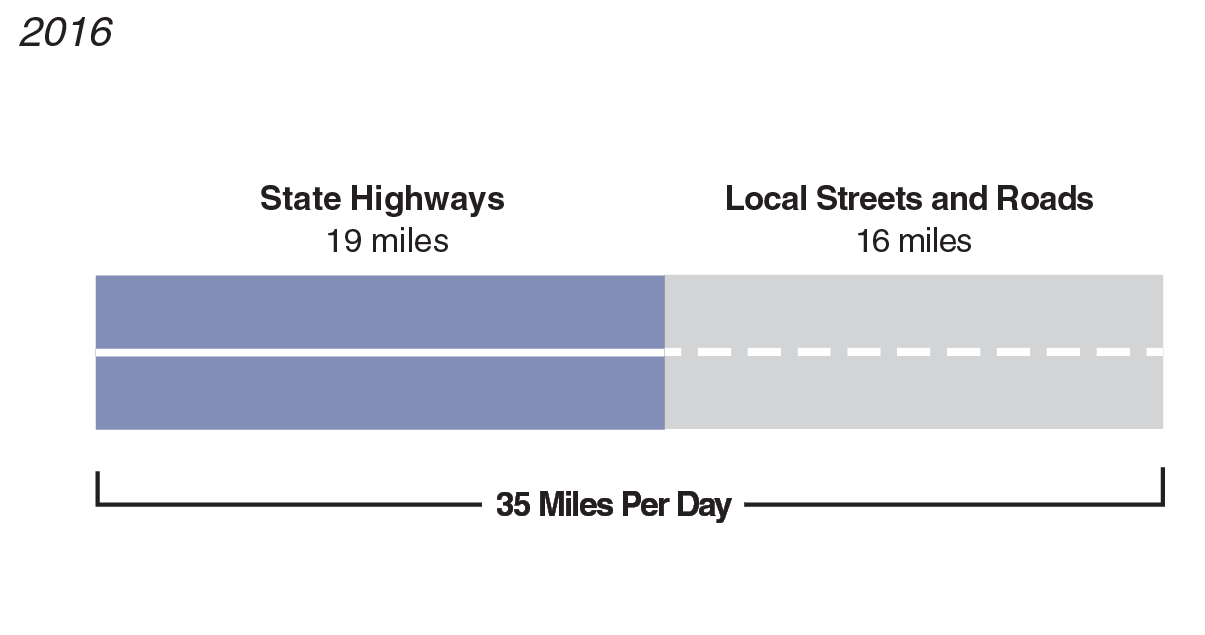 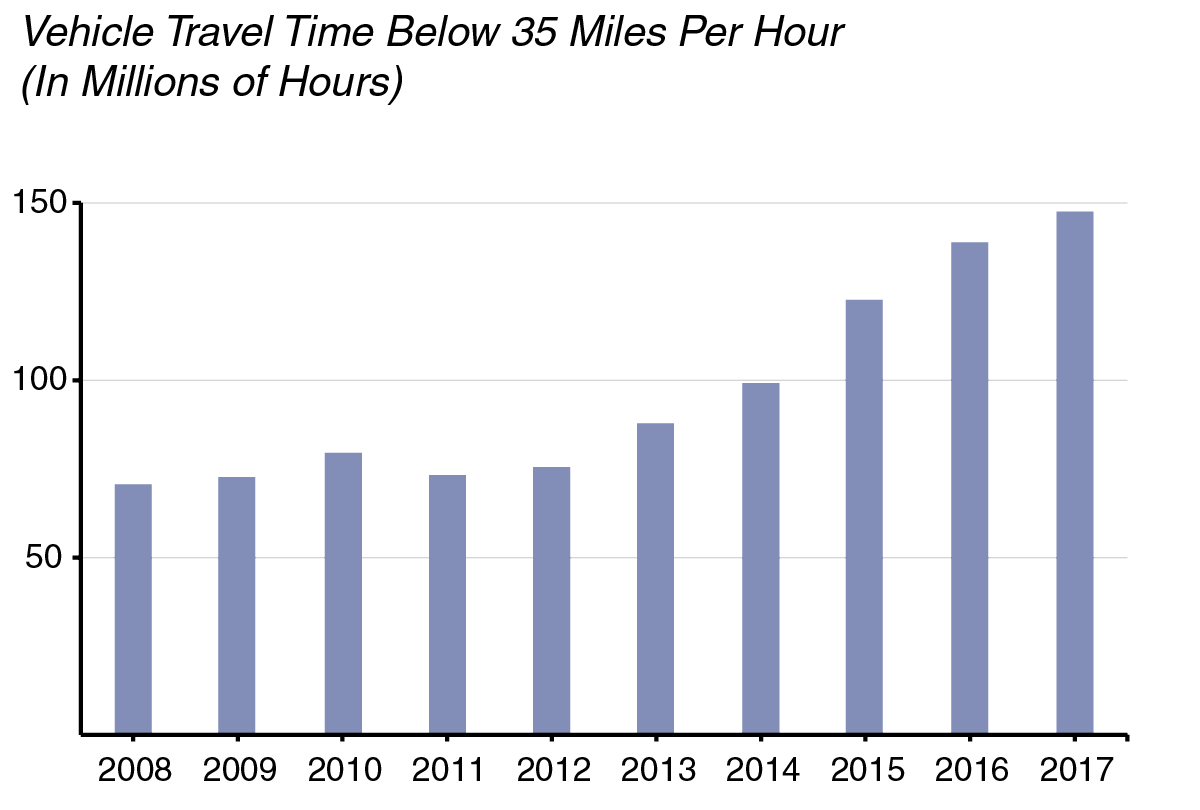 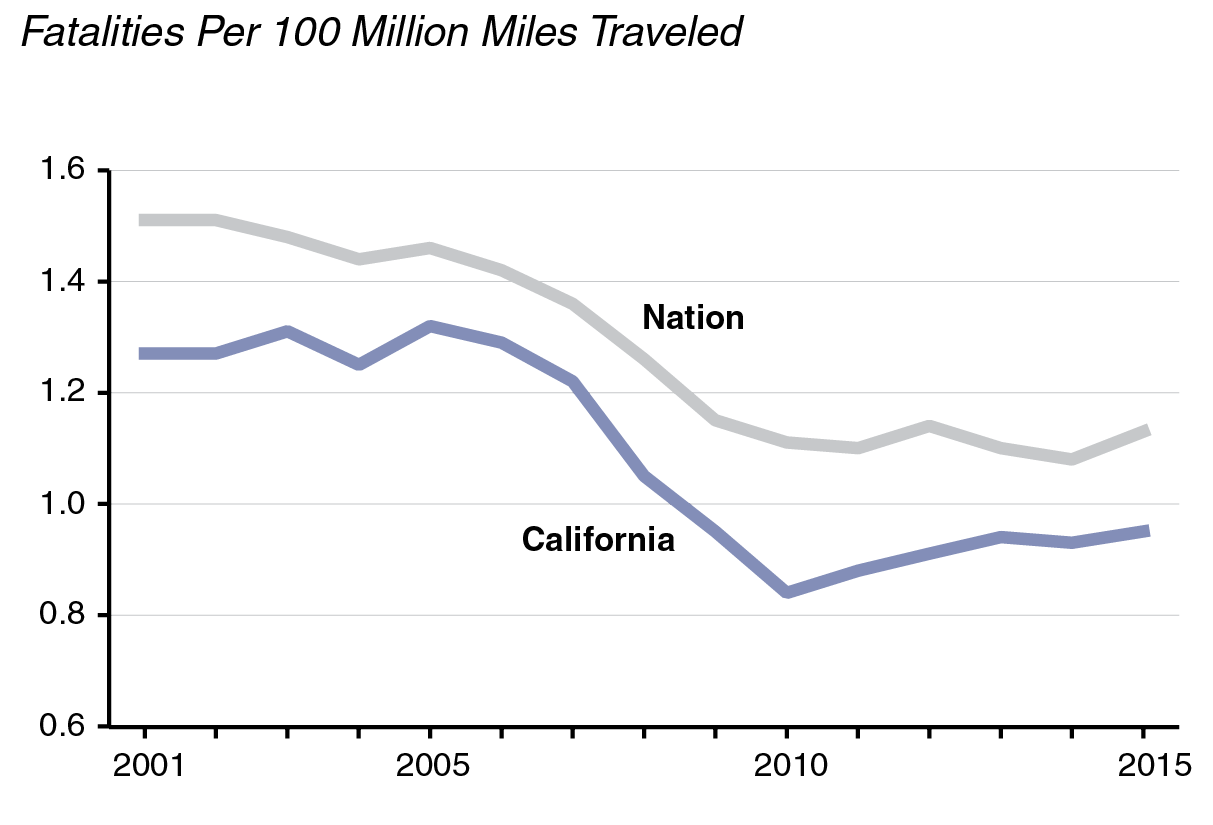 Driving Is the Largest Source of Greenhouse Gas Emissions in California 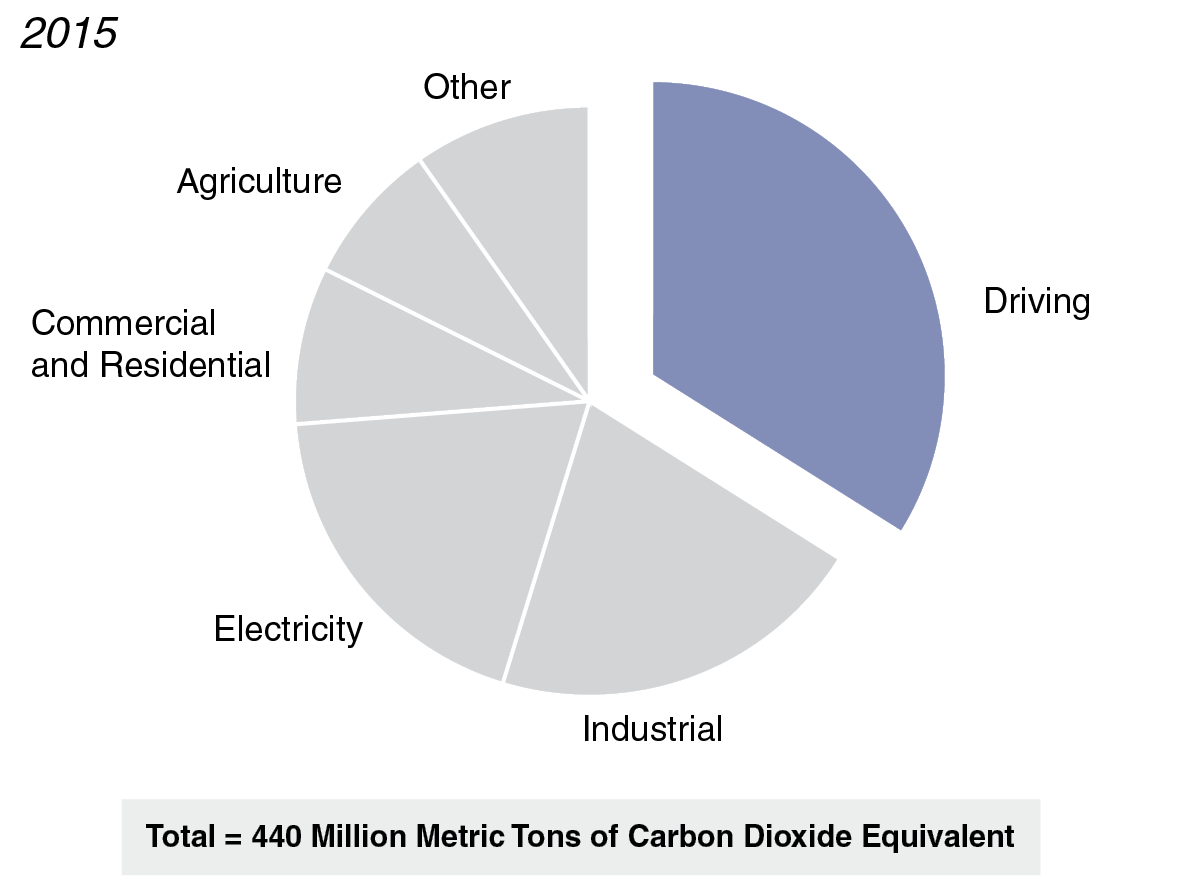 Fuel Use Per Driver Decreasing 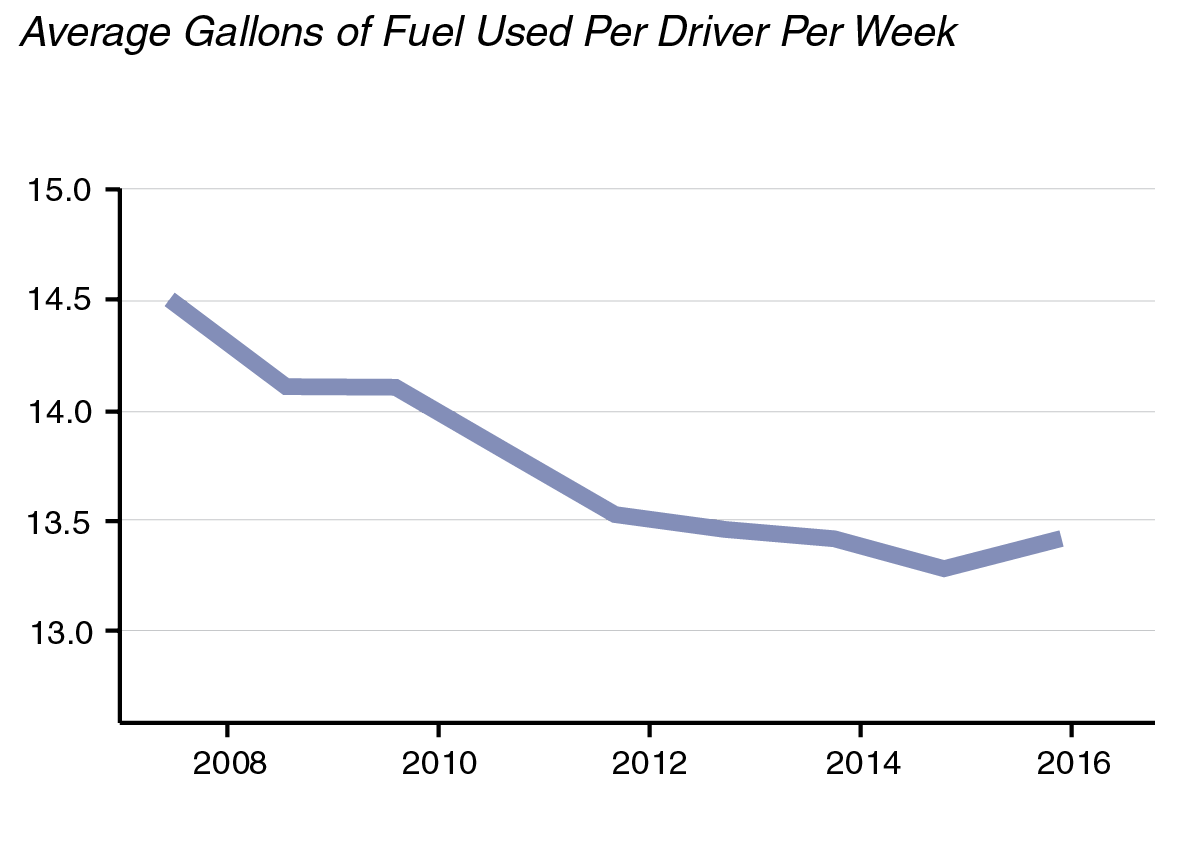 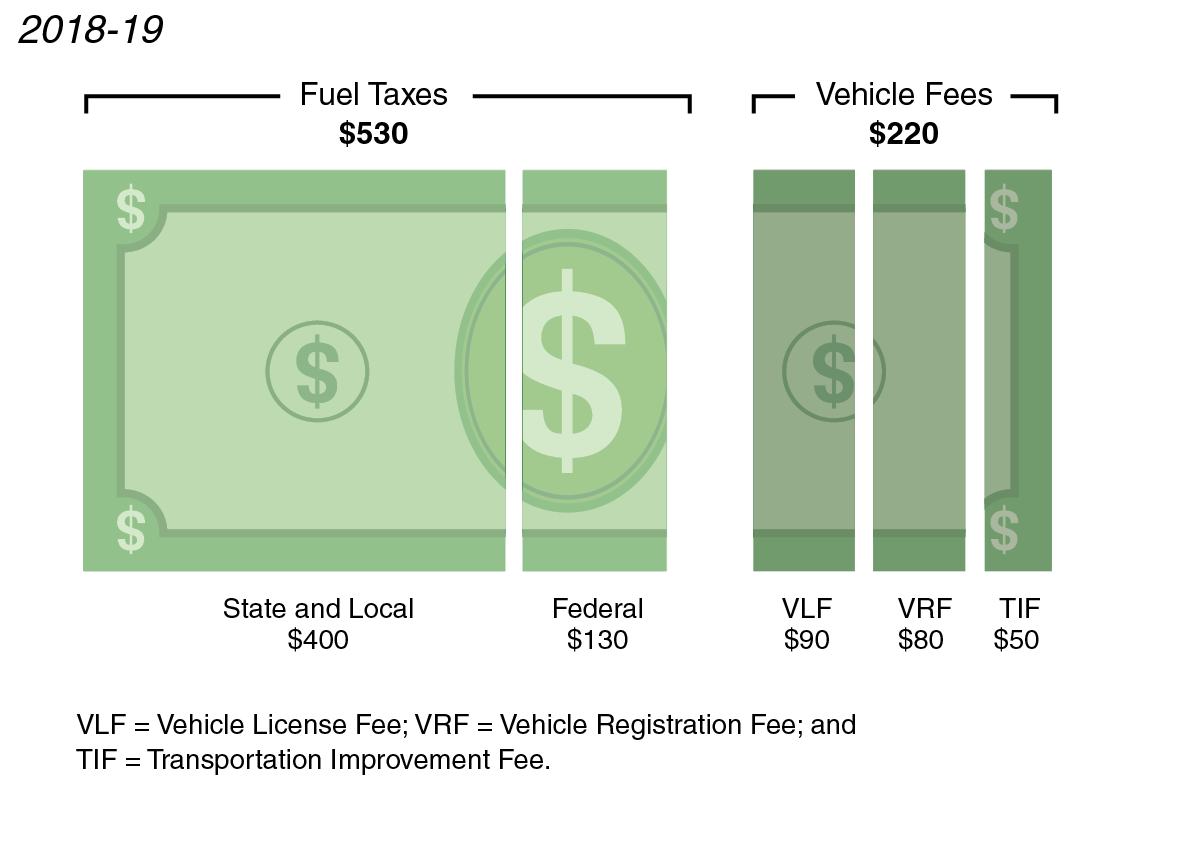 Mass transportation involves the movement of large numbers of people at once. For the purposes of this primer, mass transportation includes what are commonly referred to as “transit” services (such as city buses, subways, and ferries) as well as intercity rail and commercial aviation. California’s mass transportation infrastructure consists of approximately 22,000 transit vehicles serving more than 700 transit passenger stations, 2,550 miles of intercity rail corridors, and 28 commercial service airports. In recent years, the state has made significant investments in expanding transit and rail networks as one of several strategies for reducing the state’s GHG emissions and addressing highway congestion.

In this chapter, we provide information on mass transportation in California, including who uses transit; the state of repair of California’s transit assets; how the environmental impact of transit compares to driving; an overview of the planned high‑speed rail network; and recent trends in transit intercity rail; and airport ridership. 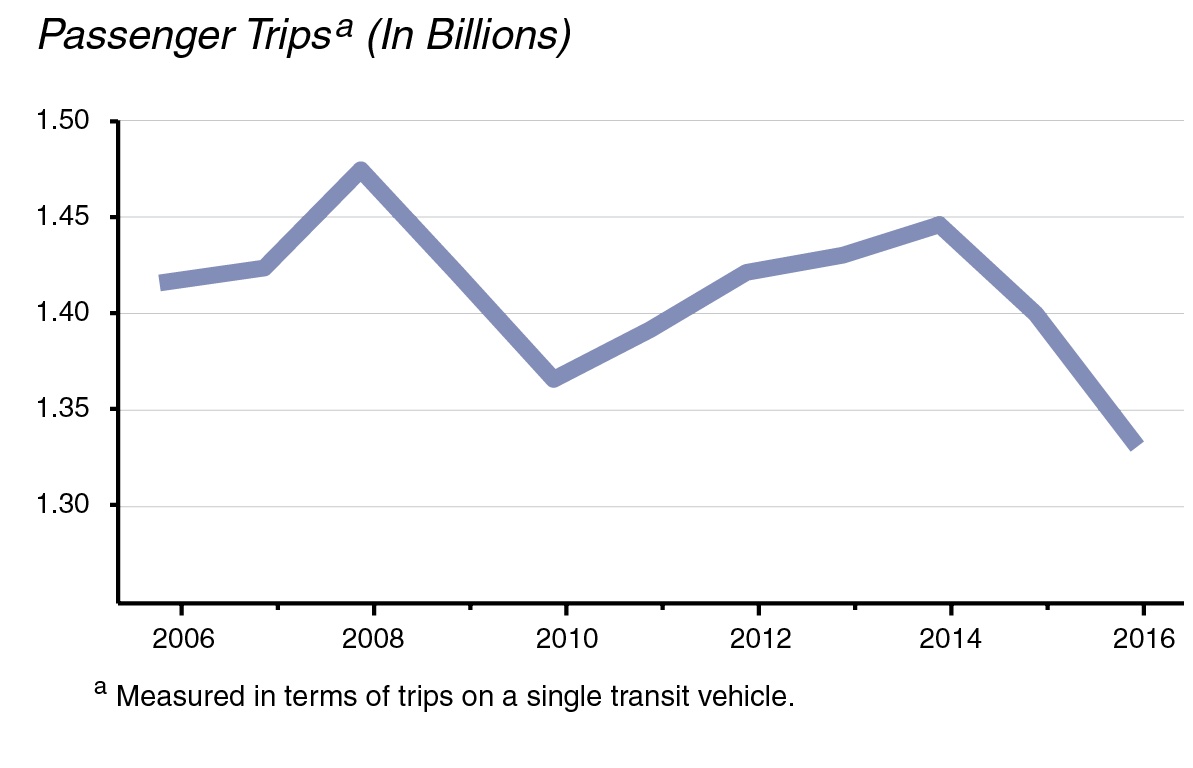 Most Transit Trips Occur on Buses 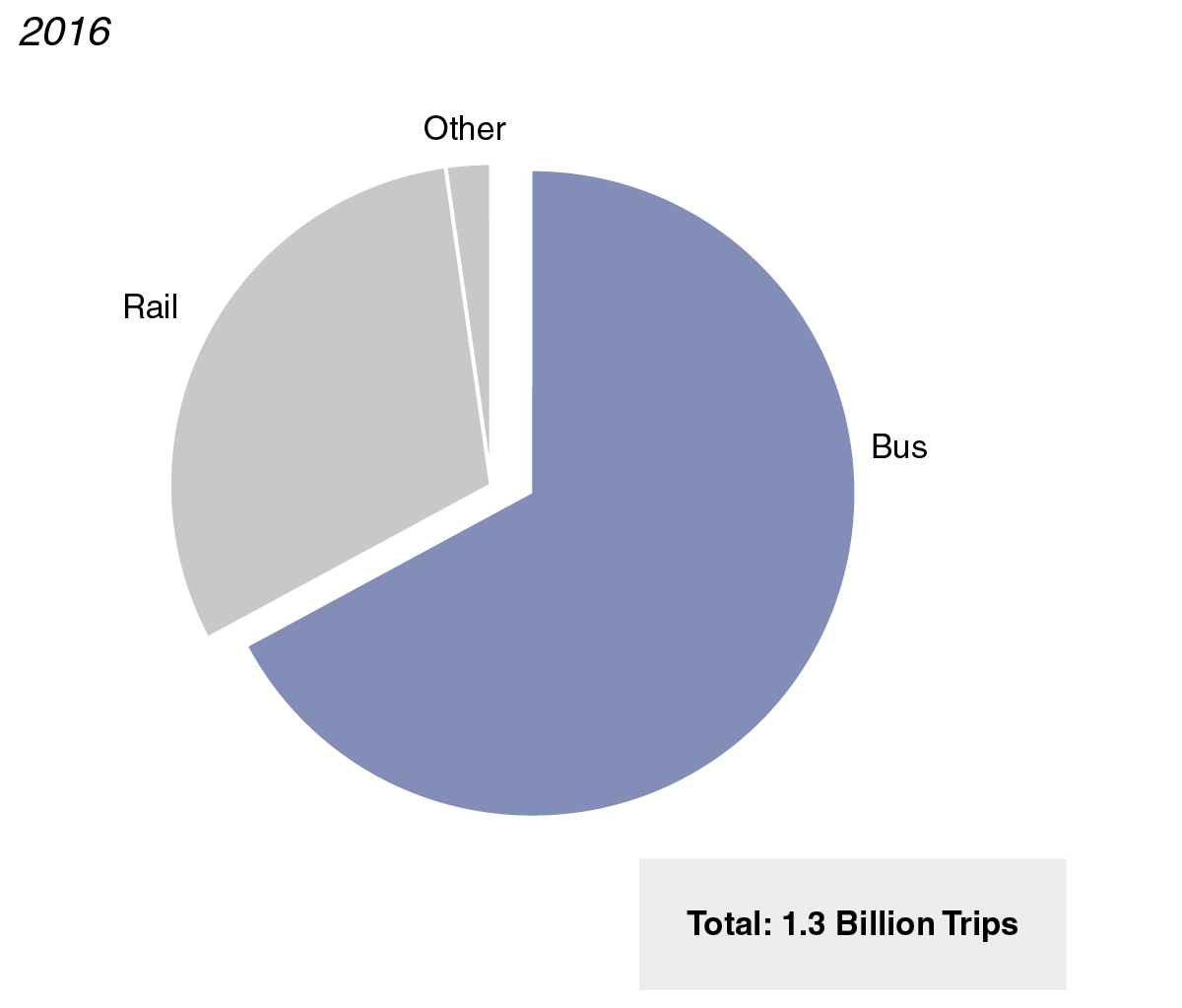 Large Share of Transit Assets Are in Need of Replacement 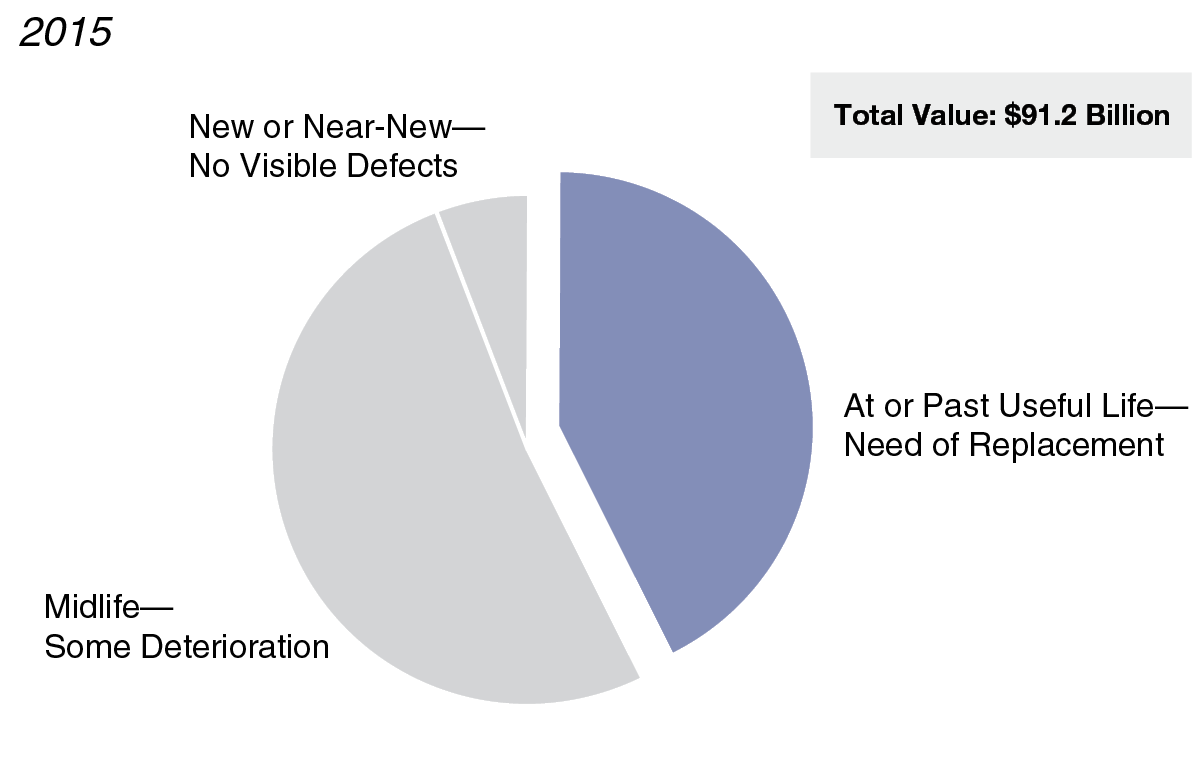 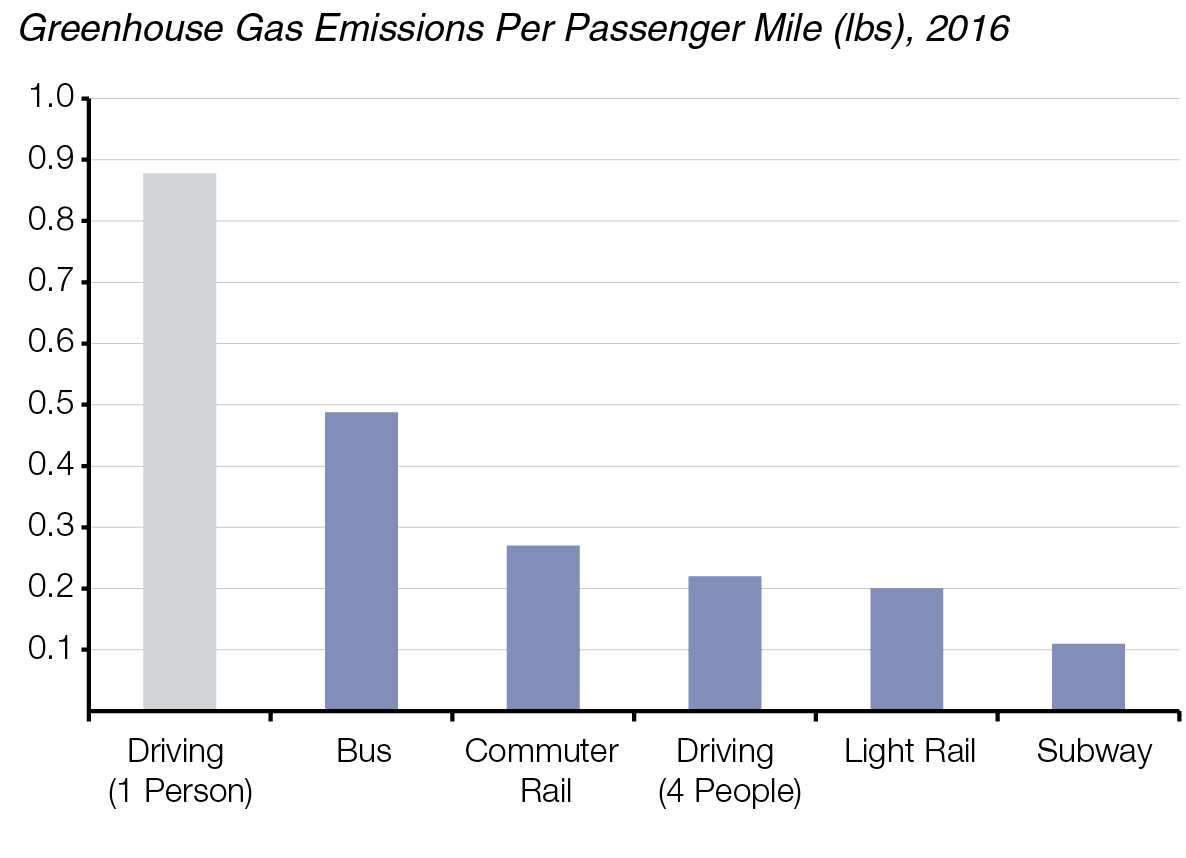 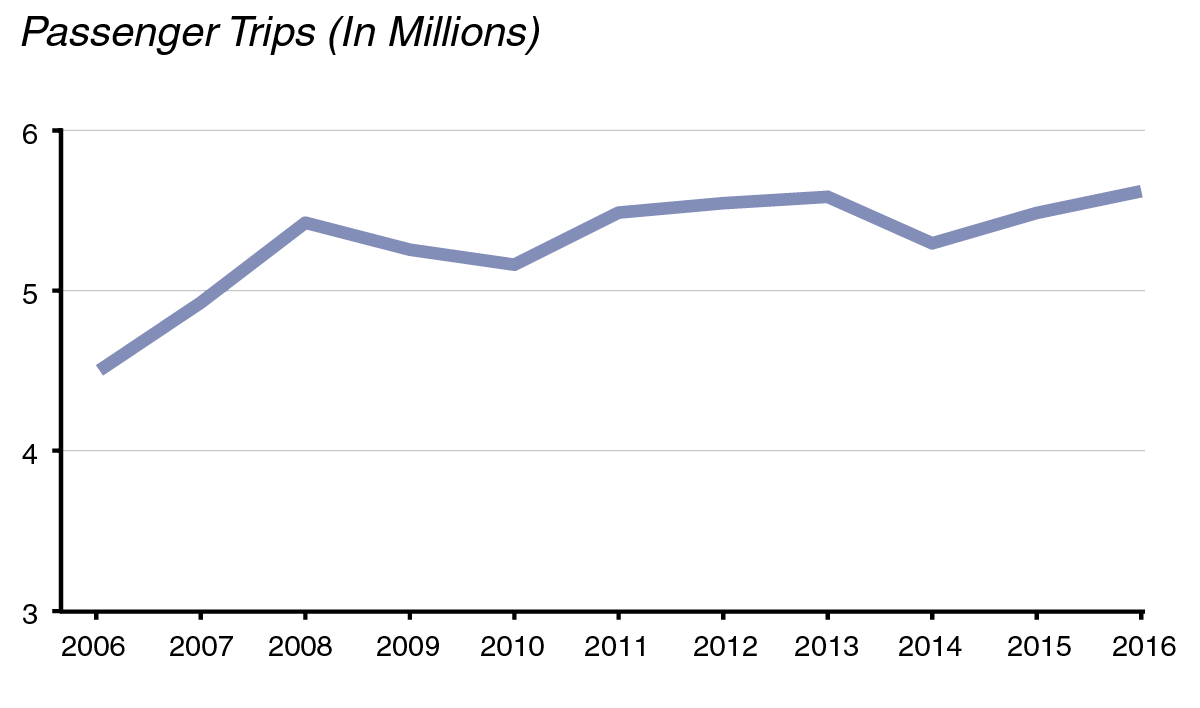 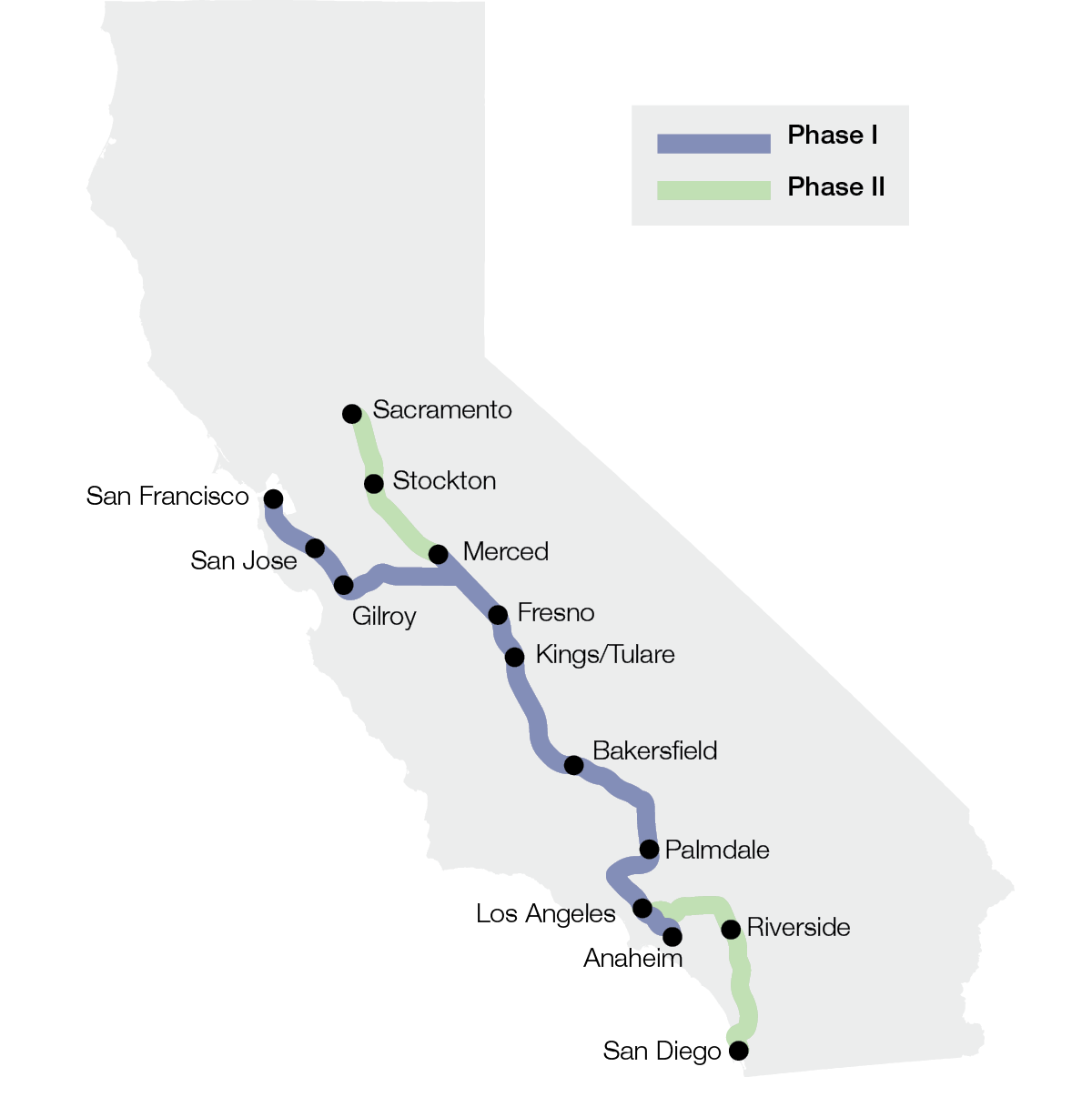 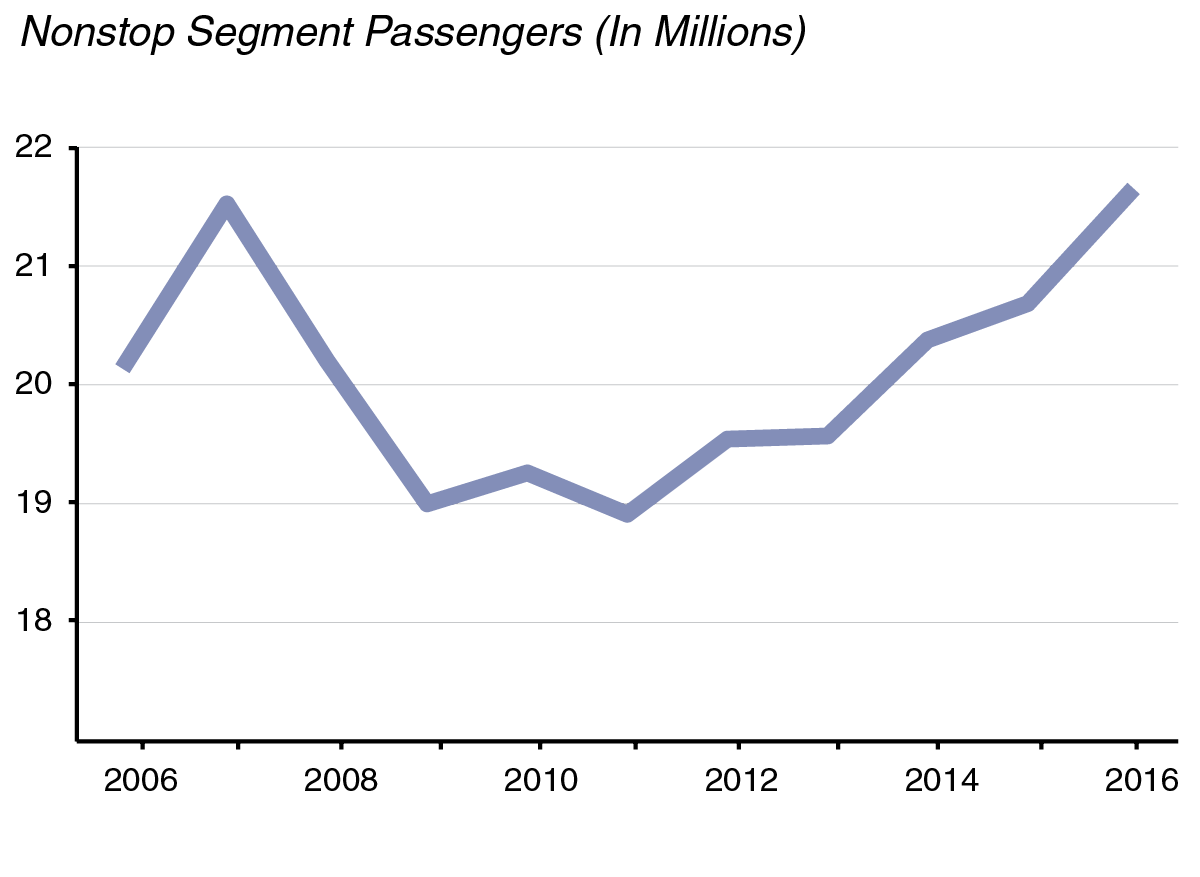 Active transportation involves the traveler being physically active through biking and walking. In recent years, the state has taken steps to improve the infrastructure for this type of transportation. For example, in 2013 the state established the Active Transportation Program (ATP) by consolidating several existing state and federal bicycle and pedestrian programs in order to provide greater flexibility in meeting the state’s active transportation needs. In 2017, the state increased state funding for ATP by $100 million, bringing total annual funding for the program to $230 million. In addition, Caltrans recently published the state’s first bicycle and pedestrian plan, which focuses on four objectives—safety, mobility, preservation, and social equity. Beyond improving infrastructure for bicyclists and pedestrians, active transportation efforts also help the state meet its climate change goals by encouraging emission‑free modes of travel.

In this chapter, we provide information on active transportation in California, including data on bicycling and walking trips as well as cyclist and pedestrian injuries and fatalities. 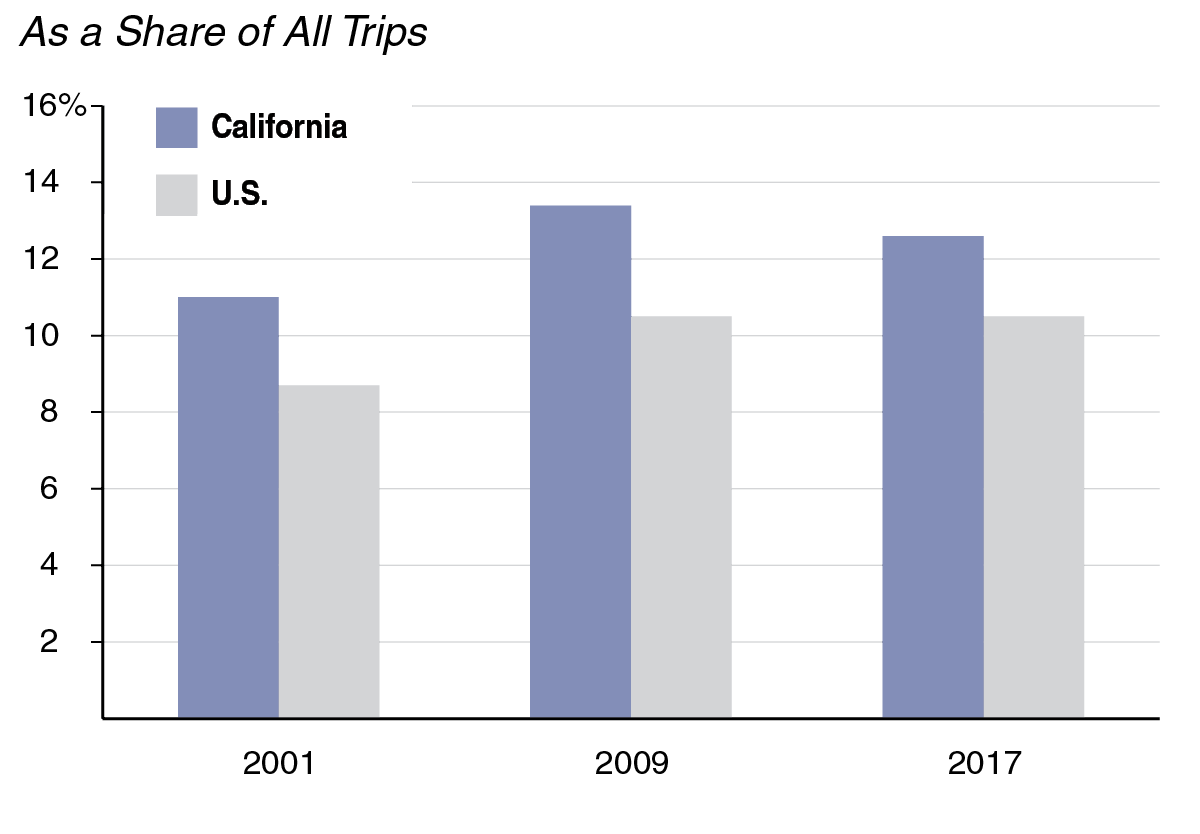 Growing Focus on Planning for Bicycle and Pedestrian Travel 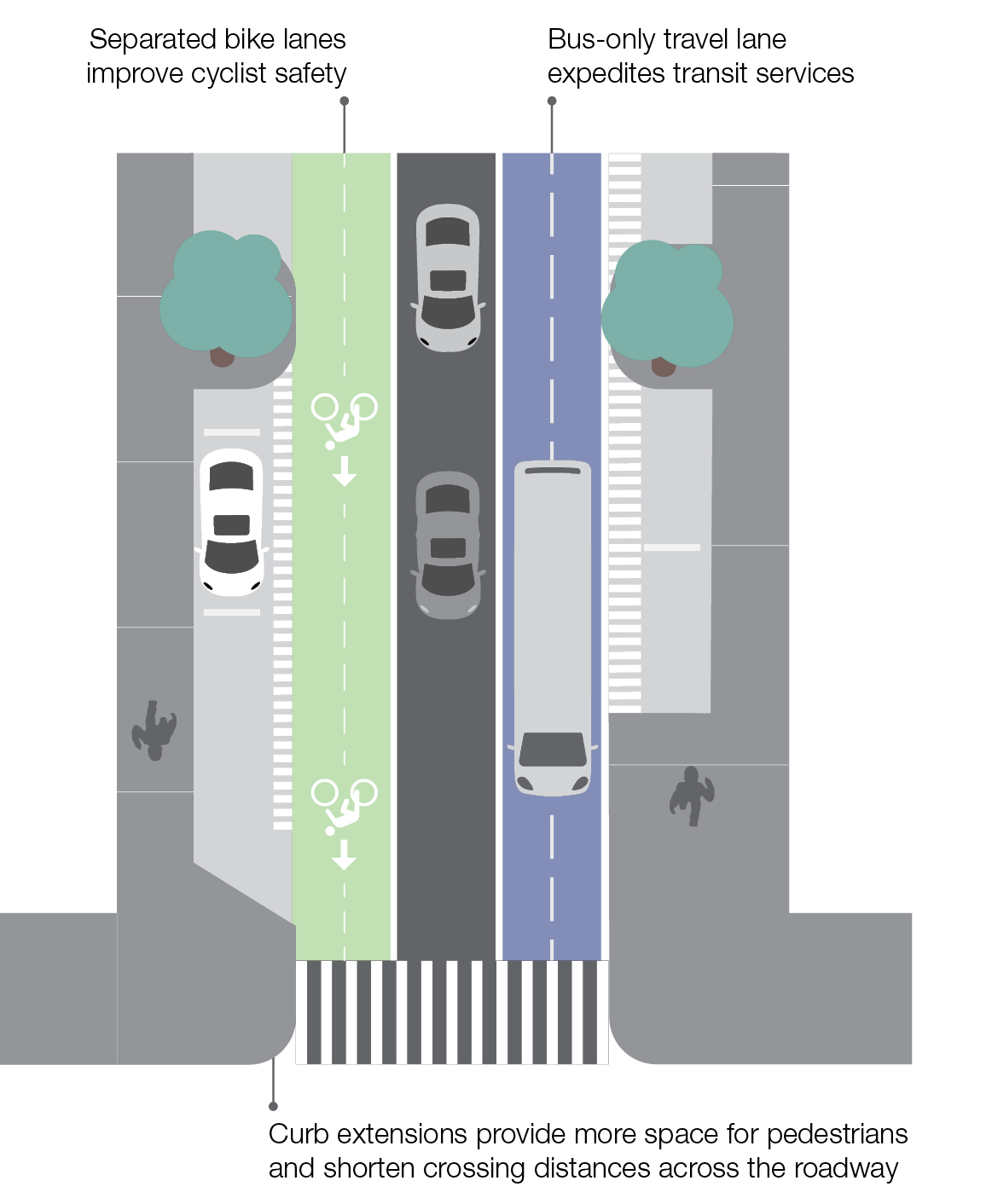 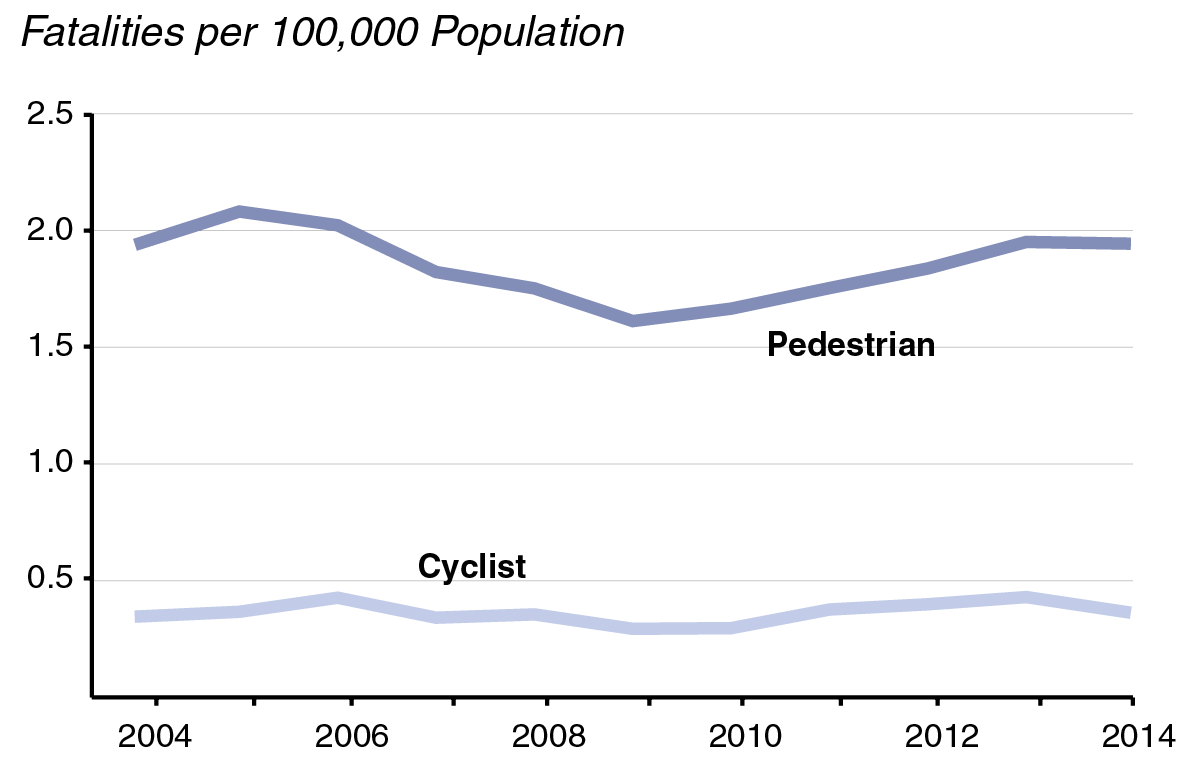 California is a hub for freight movement. Measured by value, more international goods enter California than any other state, moving through its 12 seaports, 12 major cargo‑handling airports, and 3 land ports of entry with Mexico. In addition, the state’s agricultural sector is a critical source of goods for export.

Highways and trucks form the backbone of California’s freight transportation system. Air cargo volumes are on the rise, however, coinciding with the recent economic upswing. Privately operated and maintained railroads continue to play a key role in freight movement in California, while the state’s seaports handle large volumes of international imports and exports. The state recently completed a Freight Mobility Plan to enhance the economic competitiveness while mitigating the issues associated with freight movement.

In this chapter, we provide information on the movement of freight in California, including the share of international imports arriving in the state, shipment modes, air cargo volumes, and the scope of the freight rail network.

More Imports Enter the U.S. Through California Than Any Other State 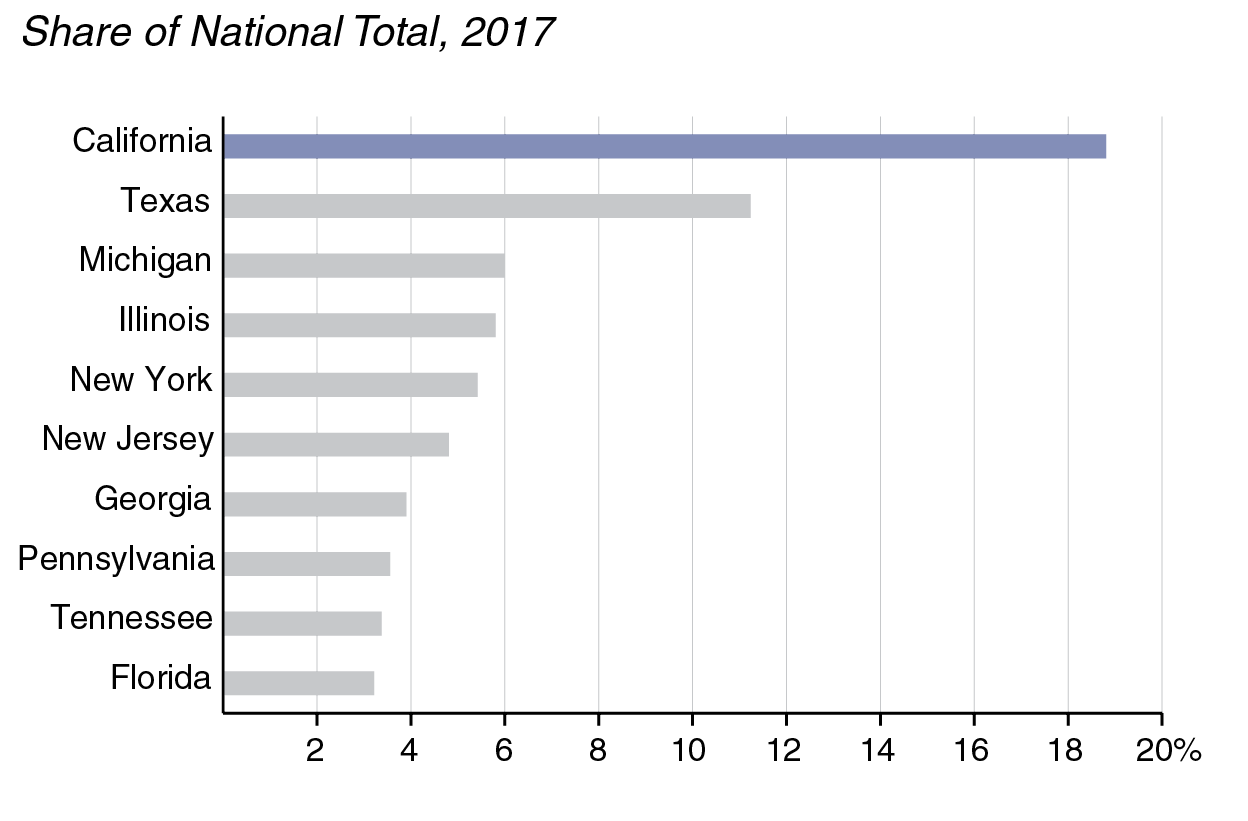 Most Domestic Freight Shipped Out of California on Trucks 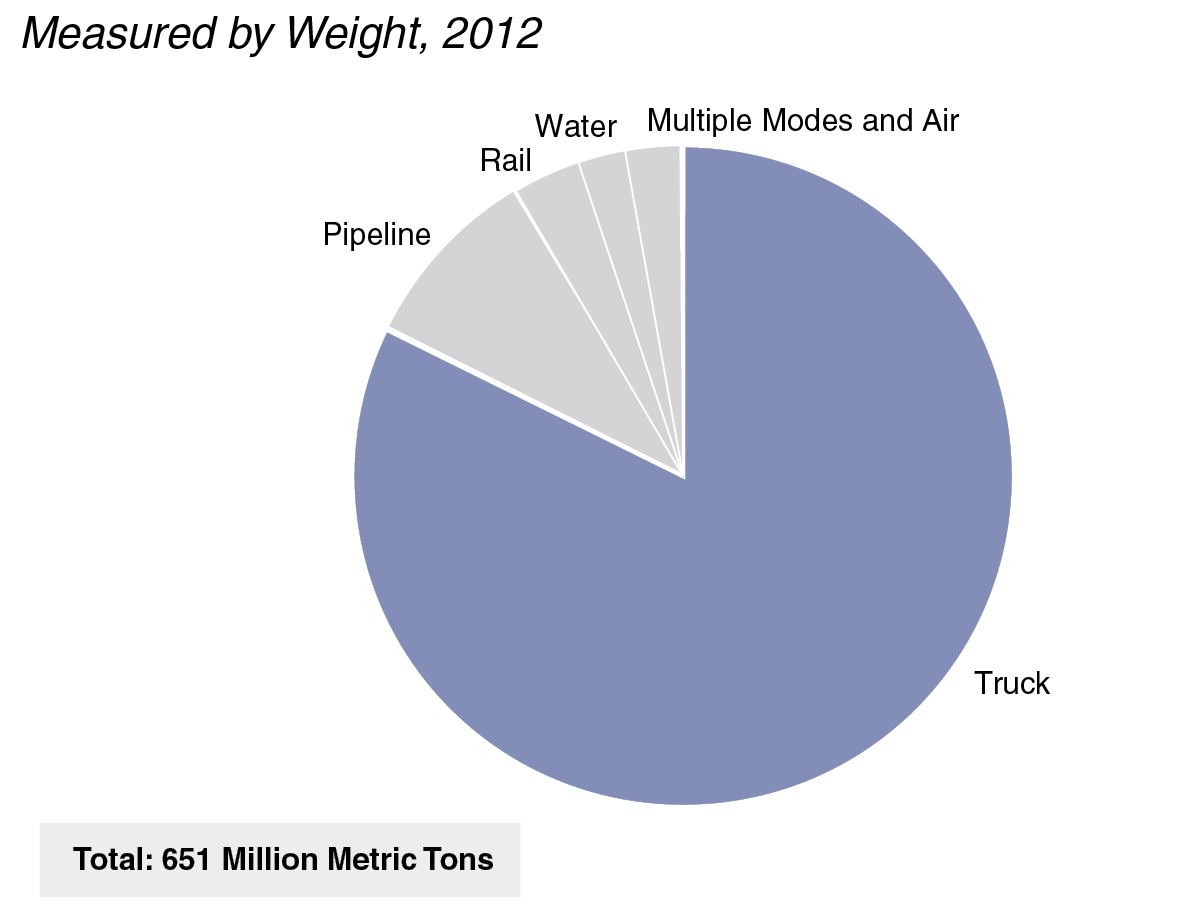 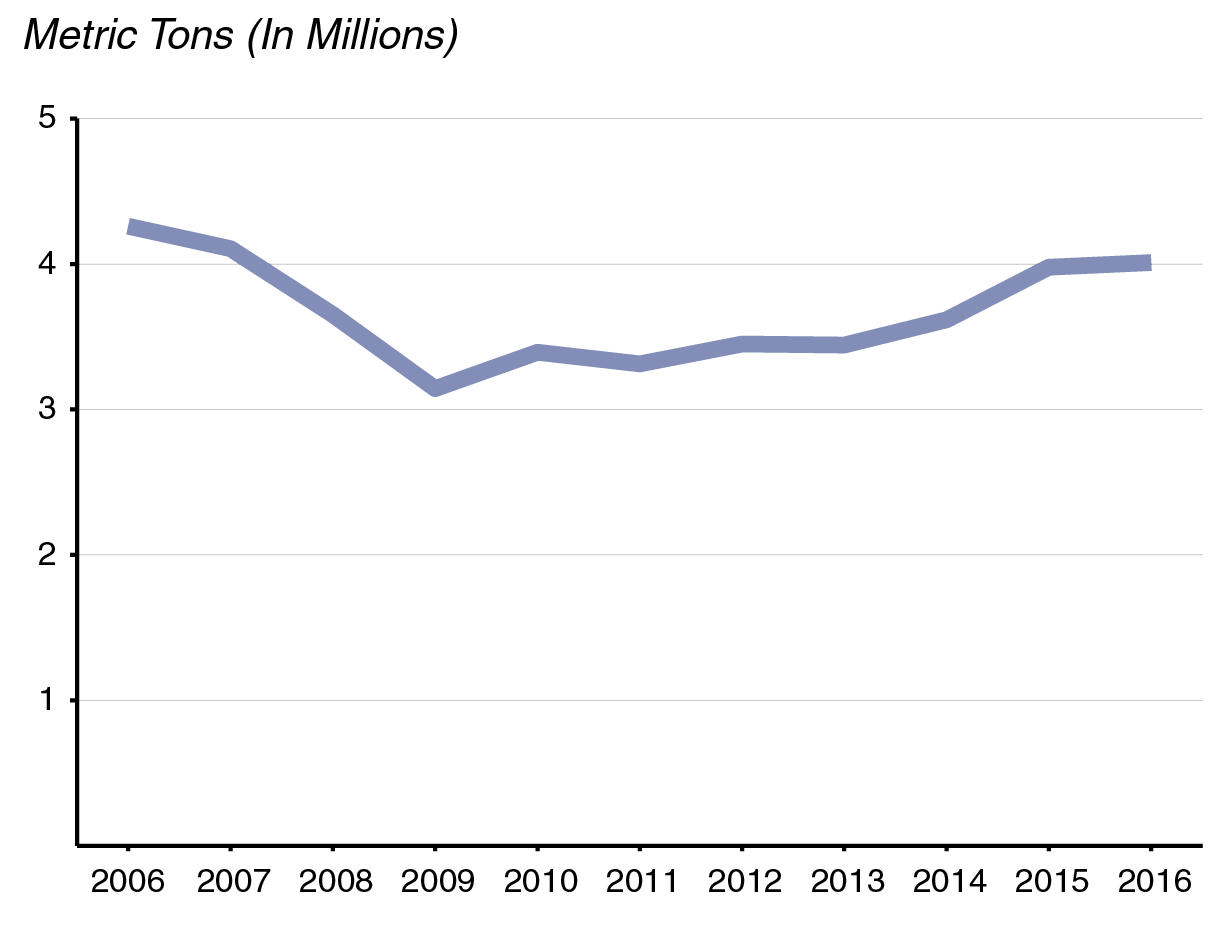 Many Companies Operate Thousands of Miles of Freight Railroads in California

The funding structure for California’s transportation programs and infrastructure is somewhat complex. Funding comes from multiple levels of government (federal, state, and local), from various charges (such as fuel taxes and vehicle fees), and supports various purposes (such as highway maintenance, transit operations, motor vehicle regulation, and debt service on transportation bonds). State funds are distributed to various programs pursuant to several formulas set forth in state law. Further, the State Constitution contains restrictions on the use of certain transportation revenues. For example, the state generally must spend fuel excise tax revenues on highways, streets and roads, and mass transportation infrastructure.

In this chapter, we provide an overview of California’s transportation funding, including information on funding for motor vehicle regulation, traffic enforcement, highways, local streets and roads, transit, intercity and high‑speed rail, airports, and seaports. 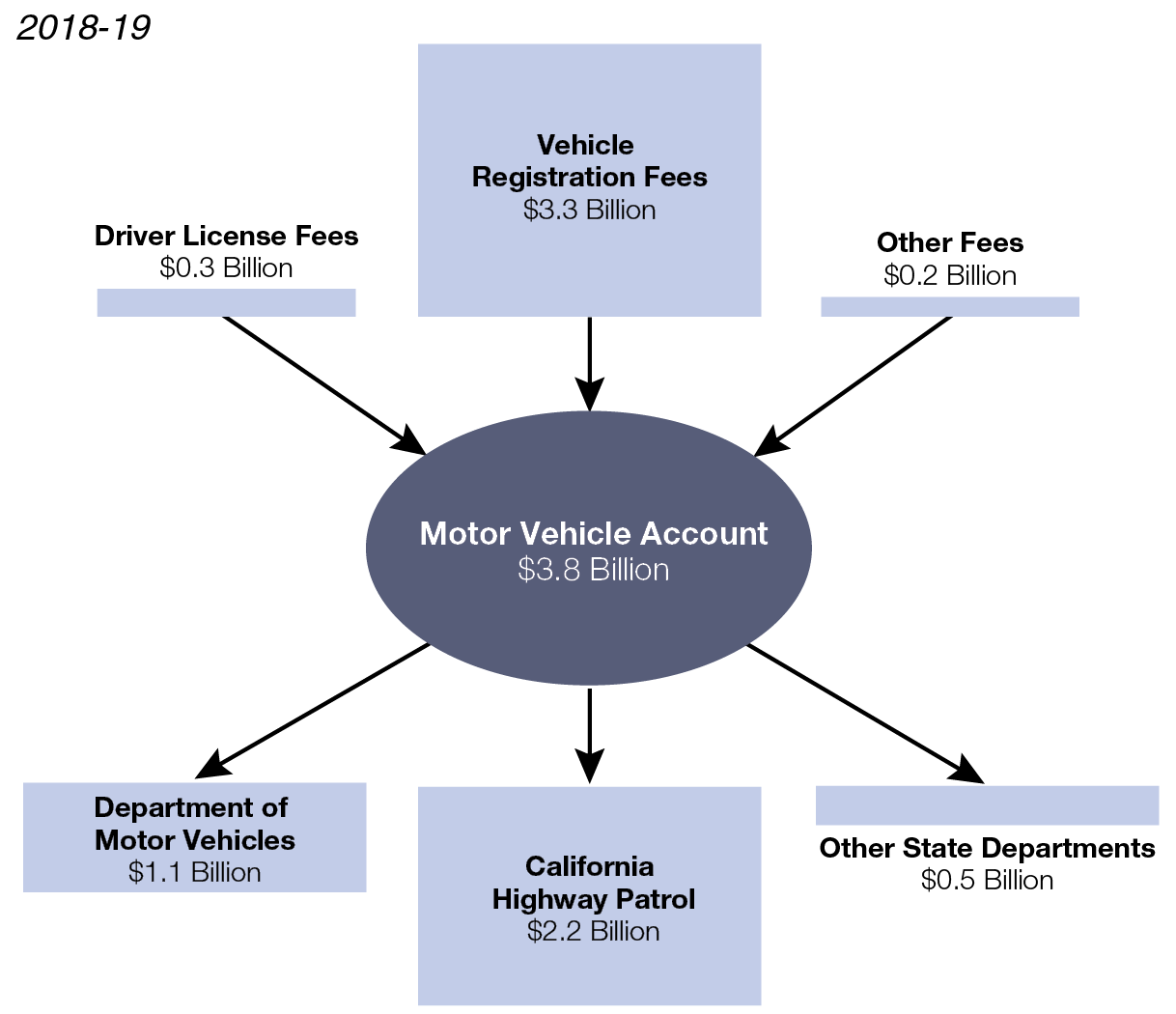 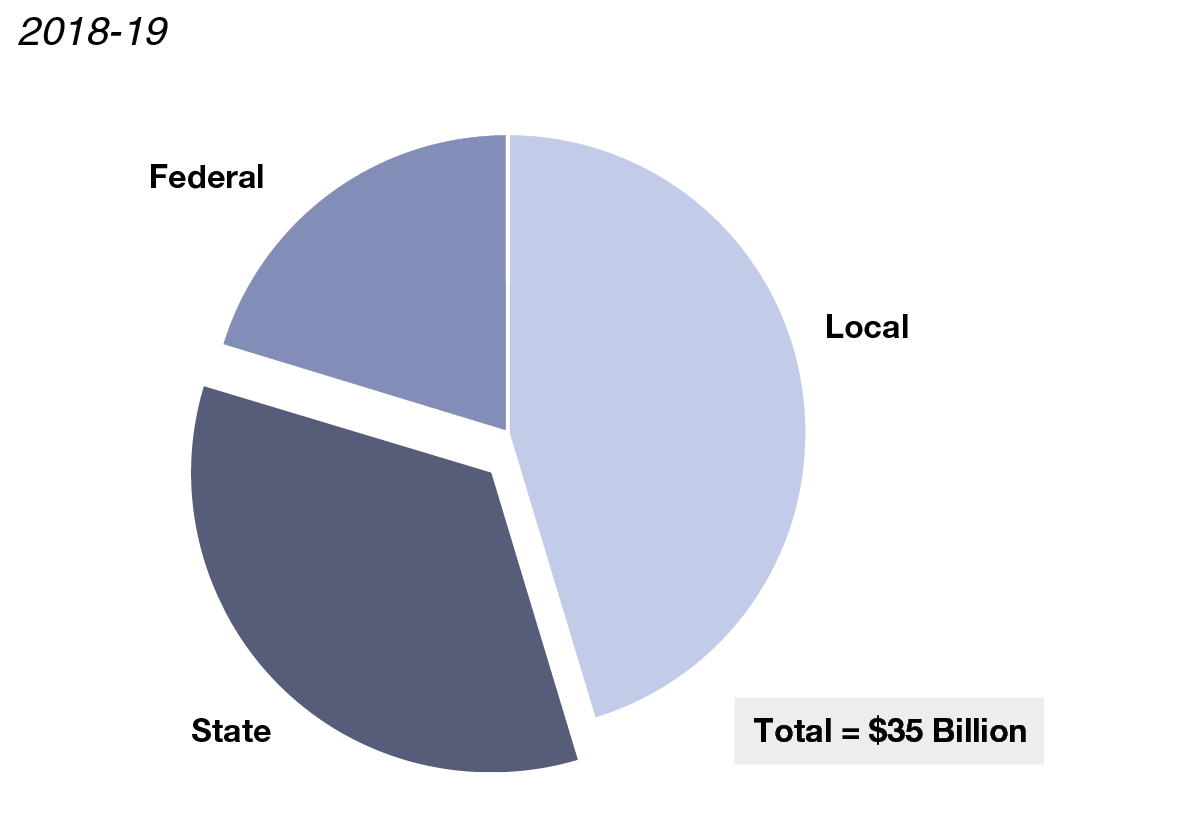 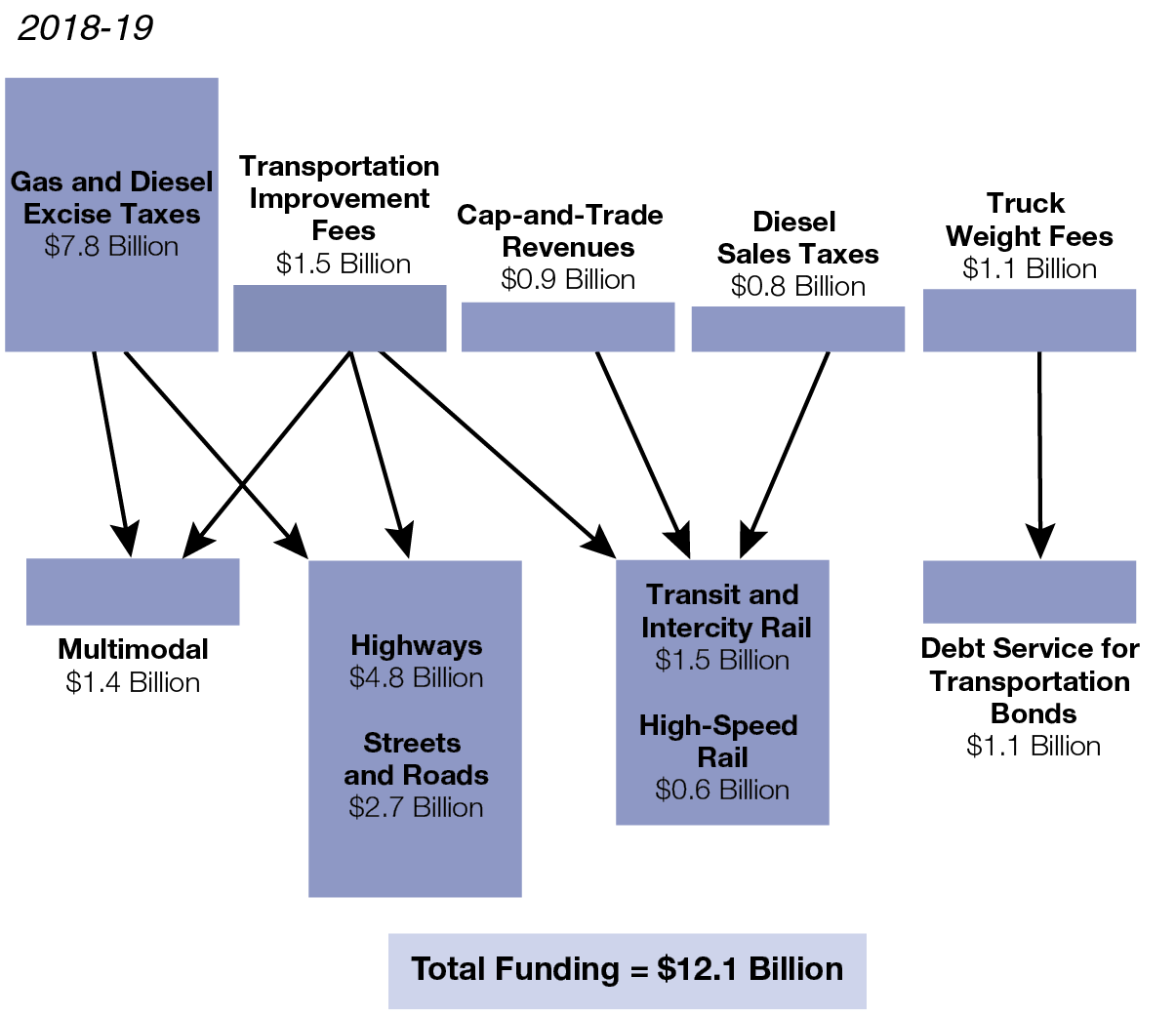 Passenger Fares Provide Less Than Half of Transit Operating Revenues 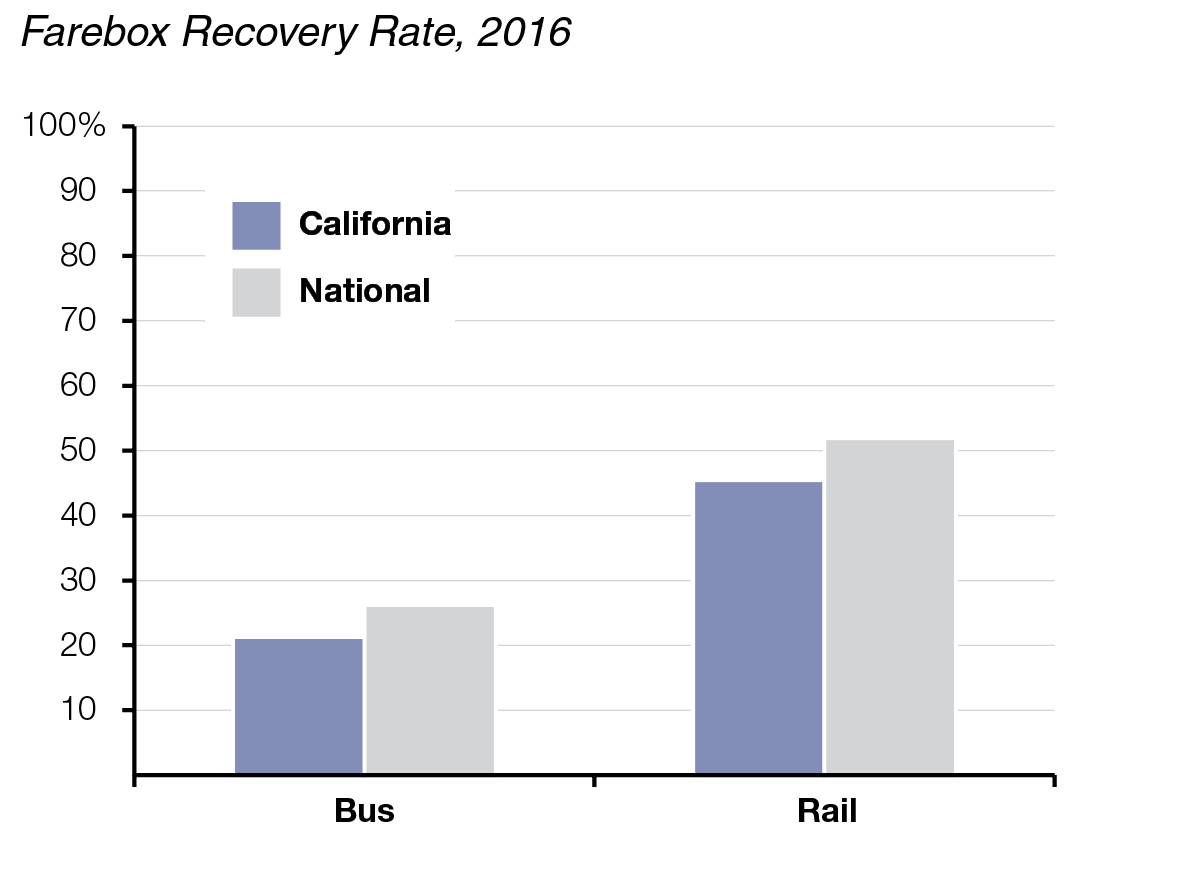 Most Californians Have Driver Licenses: California Department of Motor Vehicles.

Most California Vehicles Are Cars and Use Gas or Diesel: California Department of Motor Vehicles.

Most State Highways and Bridges Are in Good or Fair Condition: California Department of Transportation, Transportation Asset Management Plan.

More Imports Enter the U.S. Through California Than Any Other State: U.S. Census Bureau and U.S. Bureau of Economic Analysis, U.S. International Trade in Goods and Services.