In May 2018, the California State Teachers’ Retirement System (CalSTRS) released an update on the financial position of the pension system, which was largely in line with expectations. The May update contains the latest estimates of the unfunded liability and contribution rates required for districts, employees, and the state. Below, we provide background on CalSTRS and summarize key information from the May CalSTRS report.

CalSTRS Administers Pension Benefits for Teachers and Other Credentialed Employees. Nearly all school and community college employees in California are eligible to receive a pension when they retire. For teachers, administrators, and other employees holding a state credential, these pension benefits are administered by CalSTRS. Like other public pension systems in California, CalSTRS is funded through contributions from employers (school and community college districts) and employees. In addition, CalSTRS receives an annual appropriation from the state General Fund. CalSTRS is unique in that it is the only pension system in California for which the state makes a direct appropriation on behalf of local agencies.

State Adopted CalSTRS Funding Plan to Address Large Unfunded Liability. A pension system has an unfunded liability when its assets (investments and other holdings) are insufficient to cover its liabilities (the future cost of pension benefits that employees have earned to date). Except for a brief period around the early 2000s, CalSTRS has carried an unfunded liability for most of its 100-plus year history. By the latter years of the Great Recession, this unfunded liability had grown significantly and CalSTRS was estimating that it would run out of money by the mid-2040s—a short time horizon for a pension system. After two years of hearings on potential options, the Legislature enacted a plan designed to eliminate the unfunded liability in about 30 years. This funding plan phased in higher contributions from districts, employees, and the state beginning in 2014-15.

CalSTRS Recently Released Annual Funding Update. Each year, CalSTRS releases an update on the financial position of the pension system. These actuarial valuations provide an estimate of the system’s assets and liabilities. The valuations show the trajectory of CalSTRS funding over the next few decades given various assumptions about annual returns on investments, inflation, life expectancy, and other factors. They also contain projections of the contributions required for districts, employees, and the state.

Unfunded Liability Grows Less Than Expected. Figure 1 shows the change in CalSTRS’ estimate of its assets, liabilities, and unfunded liability from June 30, 2016 to June 30, 2017. Though the overall financial position of the pension system worsened slightly over this period, it did not worsen as much as initially expected. The financial position of the system was expected to worsen principally because the CalSTRS governing board reduced its assumption about annual investment returns from 7.25 percent to 7 percent for the valuation period ending June 30, 2017. (The board previously lowered this assumption from 7.5 percent to 7.25 percent for the period ending June 30, 2016.) The change in investment return and other factors were expected to result in a $111.5 billion unfunded liability as of June 30, 2017. The May funding update reflects a somewhat smaller estimated unfunded liability ($107.3 billion) due largely to stronger than assumed investment returns. 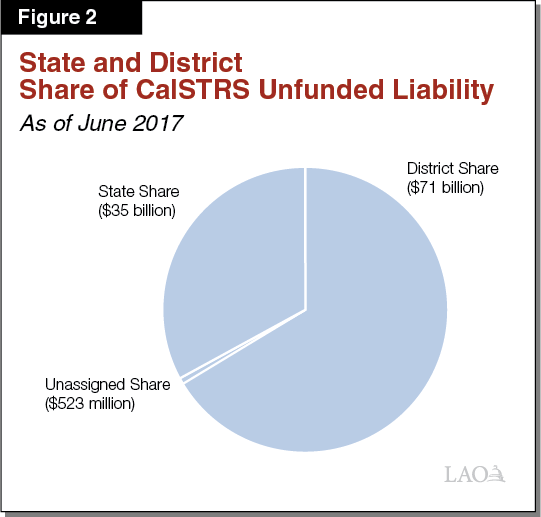 Contribution Rates Increasing as Previously Expected. In addition to changes in the estimate of the unfunded liability, the May CalSTRS update provides a projection of contribution rates. Figure 3 shows these contribution rates as a percent of payroll. In the near term, these rate projections are unchanged from the rates CalSTRS had projected in its May 2017 report. Below, we describe the rates for districts, employees, and the state.

Percentage of Payroll, May 2018 Projection

District Contribution Rate. The CalSTRS funding plan set the district contribution rate in law through 2020-21. Under the statutory schedule, the district rate will increase from 14.4 percent of salary in 2017-18 to 16.3 percent in 2018-19, an increase of 1.9 percentage points. By 2020-21, the district rate is set to reach 19.1 percent. After 2020-21, CalSTRS can increase or decrease the rate by up to 1 percentage point per year, though the total district rate cannot exceed 20.25 percent. Under CalSTRS’ current projections, the district rate would decrease after 2020-21, dropping 1 percentage point over the two subsequent years. For 2022-23 and beyond, the rate would be 18.1 percent of salary. (We note that future rates will differ from CalSTRS’ current projections. If payroll grows more slowly than assumed—for example, due to a recession—the rate could reach the 20.25 percent maximum.)

Employee Contribution Rate. The Public Employees’ Pension Reform Act (PEPRA) requires employees hired after January 1, 2013 to pay half of the “normal cost” of their pension benefits. (The normal cost is an estimate of the annual contribution required to fully fund the pension benefits an employee earns during the year. It excludes costs for paying down unfunded liabilities.) Due primarily to the assumption of lower investment returns, CalSTRS’s estimate of normal cost has increased. As a result, the contribution rate for PEPRA employees is increasing from 9.2 percent in 2017-18 to 10.2 percent in 2018-19. Absent future changes in the investment return and other assumptions, PEPRA employees’ contribution rates will tend to remain more stable than the district and state rates. Compared to PEPRA employees, the rate for employees hired prior to January 1, 2013 is remaining flat at 10.3 percent. The rate for these classic employees is fixed in law (at 10.3 percent) rather than being tied to an estimate of normal cost.